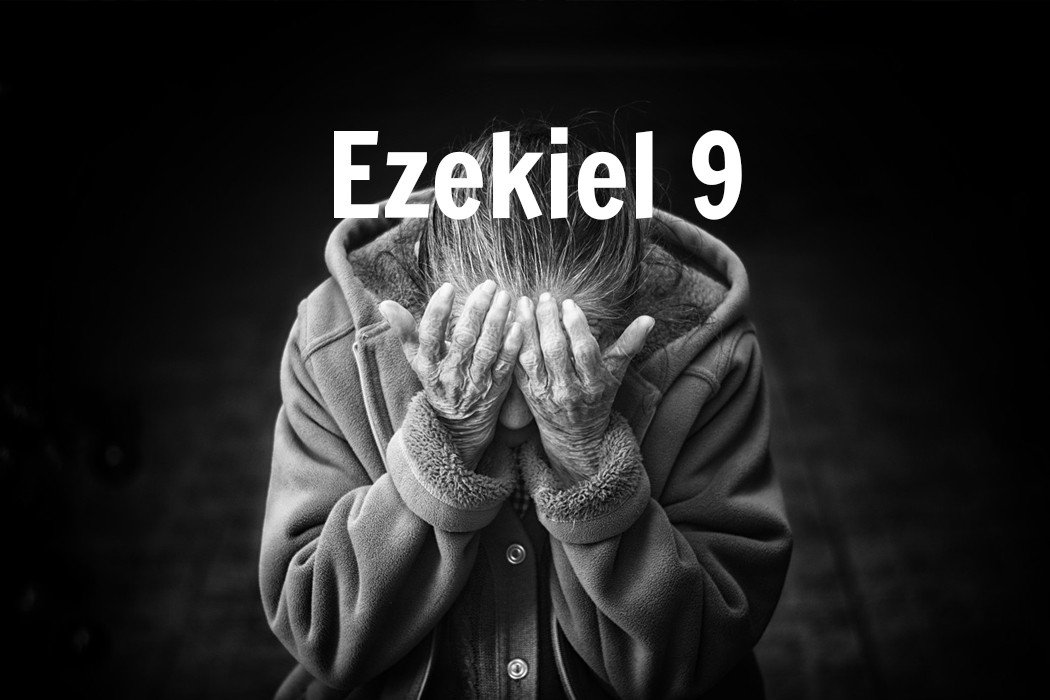 9 Then he cried in my ears with a loud voice, saying, “Bring near the executioners of the city, each with his destroying weapon in his hand.” And behold, six men came from the direction of the upper gate, which faces north, each with his weapon for slaughter in his hand, and with them was a man clothed in linen, with a writing case at his waist. And they went in and stood beside the bronze altar.

Now the glory of the God of Israel had gone up from the cherub on which it rested to the threshold of the house. And he called to the man clothed in linen, who had the writing case at his waist. And the LORD said to him, “Pass through the city, through Jerusalem, and put a mark on the foreheads of the men who sigh and groan over all the abominations that are committed in it.” And to the others he said in my hearing, “Pass through the city after him, and strike. Your eye shall not spare, and you shall show no pity. Kill old men outright, young men and maidens, little children and women, but touch no one on whom is the mark. And begin at my sanctuary.” So they began with the elders who were before the house. Then he said to them, “Defile the house, and fill the courts with the slain. Go out.” So they went out and struck in the city. And while they were striking, and I was left alone, I fell upon my face, and cried, “Ah, Lord GOD! Will you destroy all the remnant of Israel in the outpouring of your wrath on Jerusalem?”

Then he said to me, “The guilt of the house of Israel and Judah is exceedingly great. The land is full of blood, and the city full of injustice. For they say, ‘The LORD has forsaken the land, and the LORD does not see.’ As for me, my eye will not spare, nor will I have pity; I will bring their deeds upon their heads.”

And behold, the man clothed in linen, with the writing case at his waist, brought back word, saying, “I have done as you commanded me.”

During the days of the ancients, a common tool used was a writing kit.  On a long narrow board was a place which held a reed used to write on parchment or dried clay.  This board also had hallowed out areas where cakes of black and red colored clay or ink were held ready to be moistened.  It was a common thing carried by writers or prophets or people in the court.

Ezekiel had a vision.

The glory of the Lord rose in the temple and there appeared a man in linen with a writing kit at his side.  He was called to go and mark the people of the city, placing the moistened ink on their foreheads.  He would only mark those who were in sorrow over the state of the people who had abandoned God.  Then others were called to go through the city and slaughter those who did not have the mark.

Those who had the mark on their forehead would be spared.  This is what would differentiate the genuine followers from the lost.  When God moved upon Egypt that last night the Israelite’s were there, the door frames were marked with the blood of lambs.  When the angel passed over if a household had the blood, the angel would move on.  If not, he would go in and take the firstborn son.  John’s vision of Revelation has a marking as well.  In the last days of earth as we know it, God will mark the foreheads of those who are redeemed (Revelation 7:3).  Satan will mark his followers destined for destruction (Revelation 13:16-17).  God will bring redemption to those marked by Him.

The reality is we may not have a marking on our forehead that is seen.  But God knows His own.  So does Satan.  These marks are not there because we’re good people, do the right thing and check the boxes.  The markings of God are there because we’ve accepted Jesus and serve Him.  We know and recognize others by their fruit.  But even that does not show the true reality of a person – which is his heart.  Only God knows this.

This is a sober reminder that outward appearances are not like they seem.  They never are.

It’s tough to read about the judgment of God with regard to sin. But, it’s right. The standard set by the holiness of God is not the same as our human standard. We are not innocent until proven guilty. We are guilty until pleading repentance. This is exactly what God requested of the people. His love for them burned so deeply that He would not allow such horrible and perverse acts to continue to take place in His sight.

What were the people guilty of?

Ultimately, their responses communicated that they did not care what God thought or how He felt. They would not acknowledge their faults. They would not grieve over their choices. In the end, God wanted repentance. That has not changed at all – even today.