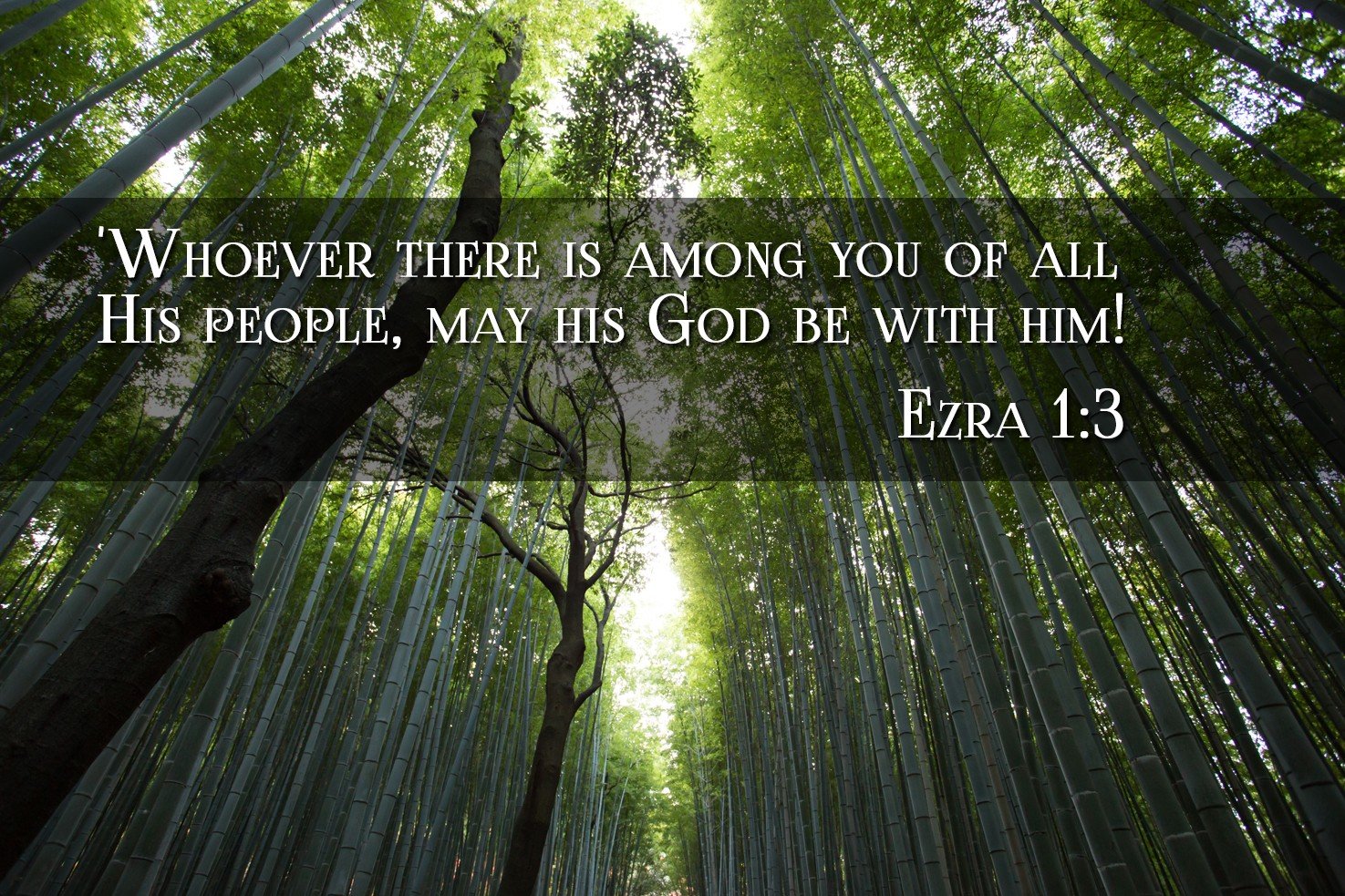 The Proclamation of Cyrus

“Thus says Cyrus king of Persia: The LORD, the God of heaven, has given me all the kingdoms of the earth, and he has charged me to build him a house at Jerusalem, which is in Judah. Whoever is among you of all his people, may his God be with him, and let him go up to Jerusalem, which is in Judah, and rebuild the house of the LORD, the God of Israel—he is the God who is in Jerusalem. And let each survivor, in whatever place he sojourns, be assisted by the men of his place with silver and gold, with goods and with beasts, besides freewill offerings for the house of God that is in Jerusalem.”

Then rose up the heads of the fathers' houses of Judah and Benjamin, and the priests and the Levites, everyone whose spirit God had stirred to go up to rebuild the house of the LORD that is in Jerusalem. And all who were about them aided them with vessels of silver, with gold, with goods, with beasts, and with costly wares, besides all that was freely offered. Cyrus the king also brought out the vessels of the house of the LORD that Nebuchadnezzar had carried away from Jerusalem and placed in the house of his gods. Cyrus king of Persia brought these out in the charge of Mithredath the treasurer, who counted them out to Sheshbazzar the prince of Judah. And this was the number of them: 30 basins of gold, 1,000 basins of silver, 29 censers, 30 bowls of gold, 410 bowls of silver, and 1,000 other vessels; all the vessels of gold and of silver were 5,400. All these did Sheshbazzar bring up, when the exiles were brought up from Babylonia to Jerusalem.

48 years had passed since Nebuchadnezzar destroyed Jerusalem, defeated the southern Kingdom of Judah and carried the Jewish people off to captivity.  When this Babylonian king died, so did his rule as a leader.  Persia overthrew Babylon the following year of 539 BC.  Through his reign, Babylon and Assyria were swallowed up under his Persian rule.

Persia held an interesting mindset and rule with their captives.  Their policy allowed captives to own land, have homes, take jobs and even work within the government!  Consequently, as Old Testament stories reveal, Daniel, Esther, Mordecai, Nehemiah are just 4 of these who had such positions.  It would be King Cyrus of Persia who even took things further, allowing the Jewish captives to return to their homeland.  Let’s not think this policy was because Cyrus was a ‘great guy’.  Far from it.  It was a political move where he hoped to win loyalty of his captives but also provide a buffer zone around his empire.

So, when the proclamation went forth that these Jewish people could return to their homeland –not everyone jumped at the chance.  In fact, it would only be 2 of the 12 tribes being Judah and Benjamin.  These 2 would respond in a way from the stirring of God that would lead them back to rebuild the Temple which would be destroyed.

What happened to the remaining 10 tribes?  Persian records reveal that many Jews who had been in captivity had acquired great wealth.  Many of these would have to give up everything in order to start over.  Also, the 10 tribes of the Northern Kingdom had been the first to go into captivity and so much time had passed from that dreadful day the new generation had forgotten their heritage and were unwilling to buy into the vision of rebuilding the Temple.

But what we read in this first chapter is it was God who moved the hearts of some to do His will.

“Then the heads of fathers’ households of Judah and Benjamin and the priests and the Levites arose, even everyone whose spirit God had stirred to go up and rebuild the house of the Lord which is in Jerusalem.” – Ezra 1:5

In order to do the will of God, major changes must take place within before we choose to move upon His leading and stirring.  When the people’s attitudes and desires change, directed solely by God, will we be prepared to follow through with God’s lead.

Where is God doing just that with you today?  Where is He stirring your heart toward something?  Ask God to work within your own thoughts and attitudes so you are willing to follow Him more closely even though it may be scary at the moment.

It is fascinating to consider the faith of Cyrus, King of Persia. Was he a believer in the one true God? The passage here mentions that “the LORD stirred up the spirit of Cyrus king of Persia.” Obviously, we know that God can use whatever and whomever He wants to complete His will. Cyrus used the name of God as leverage and justify his position, status, and title, however, as Hank has written, we cannot assume he was a changed man based on some of his other dealings.

As any leader of the time would have done, King Cyrus definitely leveraged his political posture with every move he made. However, the ancient writer, Josephus gives us some additional details into the person of King Cyrus. Apparently, he was partial to the Jews because he was shown the prophecies from Isaiah in which his conquests were predicted. Since he was distinguished by the God of the Jews, he was grateful and willing to give the Jews their temple back.

“It is I who says of Cyrus, ‘He is My shepherd! And he will perform all My desire.’ And he declares of Jerusalem, ‘She will be built,’ And of the temple, ‘Your foundation will be laid.'”

Thus says the LORD to Cyrus His anointed, Whom I have taken by the right hand, To subdue nations before him And to loose the loins of kings; To open doors before him so that gates will not be shut:

These amazing words were penned 150 years before Cyrus was even born! Cyrus also surrounded himself with great men, such as Daniel, who would have served under the rule of the king. Many speculate it could have been Daniel who personally pointed out these prophecies from Isaiah.

Whatever the case, Cyrus was an influential leader who God used mightily. These should be encouraging words for us because, as Americans, we are coming upon an election year. No matter who is put at the state and federal level of our government, we are commanded to pray for our leaders. We pray for them because ultimately God is over them. And we learn from this chapter that even if they are not explicitly professing faith in God, He can certainly still use them to accomplish His great and mighty plan.