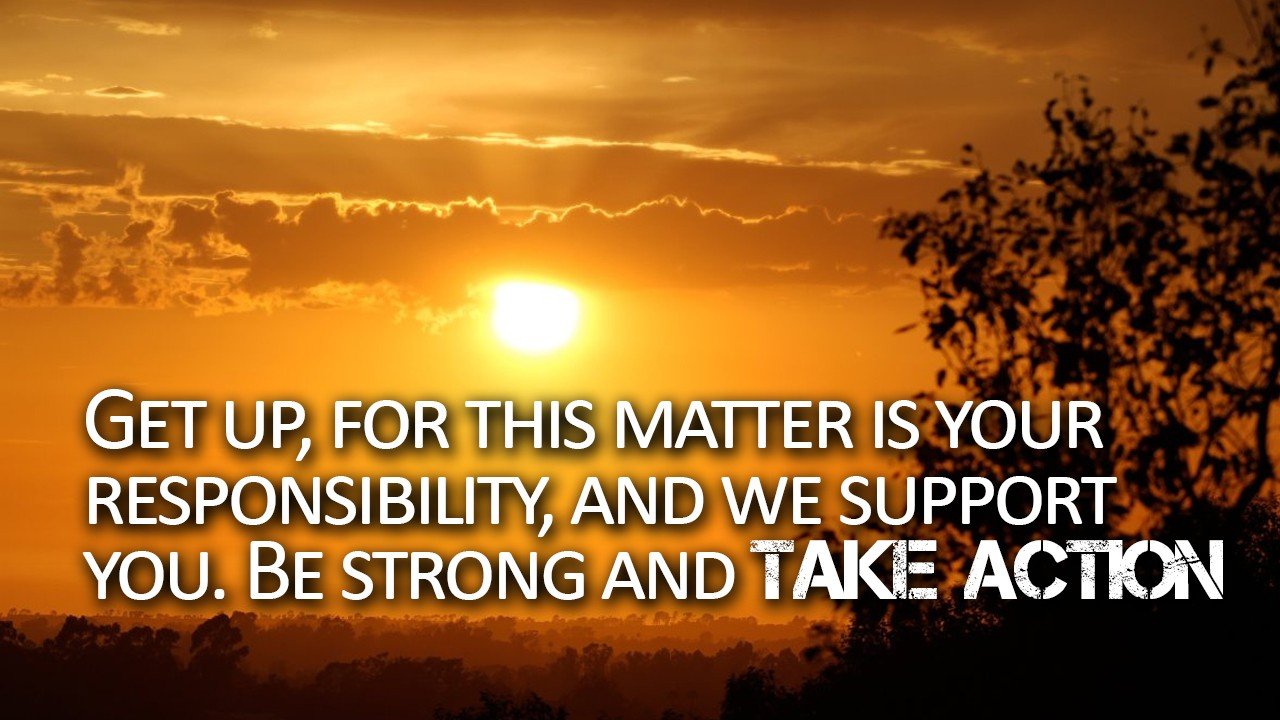 The People Confess Their Sin

10 While Ezra prayed and made confession, weeping and casting himself down before the house of God, a very great assembly of men, women, and children, gathered to him out of Israel, for the people wept bitterly. And Shecaniah the son of Jehiel, of the sons of Elam, addressed Ezra: “We have broken faith with our God and have married foreign women from the peoples of the land, but even now there is hope for Israel in spite of this. Therefore let us make a covenant with our God to put away all these wives and their children, according to the counsel of my lord and of those who tremble at the commandment of our God, and let it be done according to the Law. Arise, for it is your task, and we are with you; be strong and do it.” Then Ezra arose and made the leading priests and Levites and all Israel take an oath that they would do as had been said. So they took the oath.

Then Ezra withdrew from before the house of God and went to the chamber of Jehohanan the son of Eliashib, where he spent the night, neither eating bread nor drinking water, for he was mourning over the faithlessness of the exiles. And a proclamation was made throughout Judah and Jerusalem to all the returned exiles that they should assemble at Jerusalem, and that if anyone did not come within three days, by order of the officials and the elders all his property should be forfeited, and he himself banned from the congregation of the exiles.

Then all the men of Judah and Benjamin assembled at Jerusalem within the three days. It was the ninth month, on the twentieth day of the month. And all the people sat in the open square before the house of God, trembling because of this matter and because of the heavy rain. And Ezra the priest stood up and said to them, “You have broken faith and married foreign women, and so increased the guilt of Israel. Now then make confession to the LORD, the God of your fathers and do his will. Separate yourselves from the peoples of the land and from the foreign wives.” Then all the assembly answered with a loud voice, “It is so; we must do as you have said. But the people are many, and it is a time of heavy rain; we cannot stand in the open. Nor is this a task for one day or for two, for we have greatly transgressed in this matter. Let our officials stand for the whole assembly. Let all in our cities who have taken foreign wives come at appointed times, and with them the elders and judges of every city, until the fierce wrath of our God over this matter is turned away from us.” Only Jonathan the son of Asahel and Jahzeiah the son of Tikvah opposed this, and Meshullam and Shabbethai the Levite supported them.

Those Guilty of Intermarriage

Of the Levites: Jozabad, Shimei, Kelaiah (that is, Kelita), Pethahiah, Judah, and Eliezer. Of the singers: Eliashib. Of the gatekeepers: Shallum, Telem, and Uri.

The book of Ezra opens with the people of Israel in captivity, the temple in ruins.  As the story unfolds, Ezra recounts the return. There were many struggles the people had in rebuilding the temple and persevering towards its completion.  Finally, the chapter that ends this amazing book speaks of the restoration of the people before their God.

You see, God is able to restore all things. In fact, He led them to physically restore their worship system that was so important.  But He is also able to rebuild the lives of people who are humble. He’s willing to move through His direction in obedience for a complete restoration spiritually!  As a result, no one is too far from the hand of God’s grace.

As Ezra interceded on behalf of his people for the sin of their intermarriage – the Spirit of God pricked their hearts and they stood and wept.  The conviction of what had been done and what they were doing was not motivated by a guilt from another. It came from the power of the Spirit speaking to them.

Following Ezra’s plea before God, the people were so convicted they confessed their sin.  But there was more.  They had to act on their confession even though it was hard and deeply personal.

True repentance is not lip service.  It is correcting our behaviors that are offensive, changing our attitudes and relying on the Holy Spirit to help us.  We must put our actions where our mouth is and correct what is wrong.

Forgiveness is offered to anyone and everyone – no matter what we have done.  Furthermore, there is that moment where we must accept God’s grace and mercy.  But true forgiveness brings action and we must choose to act and correct what has been offensive to God. Where is the Spirit of God wrestling with you these days?  Where has He been speaking of something in your own relationship with God that’s created a barrier? Know that your confession of sin will be thrown as far as the east is to the west and remembered no more.  You will be set free in grace.  But also know we are not to simply state our sin, we must make corrections.

He who has ears to hear, let him hear what the Spirit is saying.

A powerful victory is found here in Chapter 10 with humility and repentance. In fact, the whole event takes place after Ezra’s intense act of grief. Notice that what spoke to the people in this particular situation was not condemnation and judgment. The key attribute was authentic sorrow on Ezra’s part.

For the sorrow that is according to the will of God produces a repentance without regret, leading to salvation, but the sorrow of the world produces death.

What is sorrow that is according to the will of God? It’s a condition of spiritual bankruptcy that can only happen through to the Holy Spirit. Ezra was a Godly man filled with the Spirit and his heart burned with conviction over the people’s sins.

“I will put My Spirit within you and cause you to walk in My statutes, and you will be careful to observe My ordinances.

Through the Holy Spirit, true repentance draws us to a place of anguish over breaking God’s standard. It’s a supernatural burden that’s so heavy that we cannot rest until we come before God in genuine confession. Contrastly, human remorse has no eternal value and is incapable of producing righteousness before God. In this way, it does not focus on God’s standard, but rather, on one’s self. Sorrow of the world is damaged pride, embarrassment, and disgrace that’s viewed as a “mistake” to be quickly swept under the rug. It seems like we see and experience this all too often.

Consequently, we must remember that repentance is not a one-time event. All of us who are believers through grace by faith have gone through the process of repentance. However, I am reminded of just how often the Spirit continues to chisel away at our lives to shape us into imitators of Christ. Let us take Ezra’s example seriously and pray for a soft heart that hears the Holy Spirit as He brings Godly sorrow to the forefront of our lives.