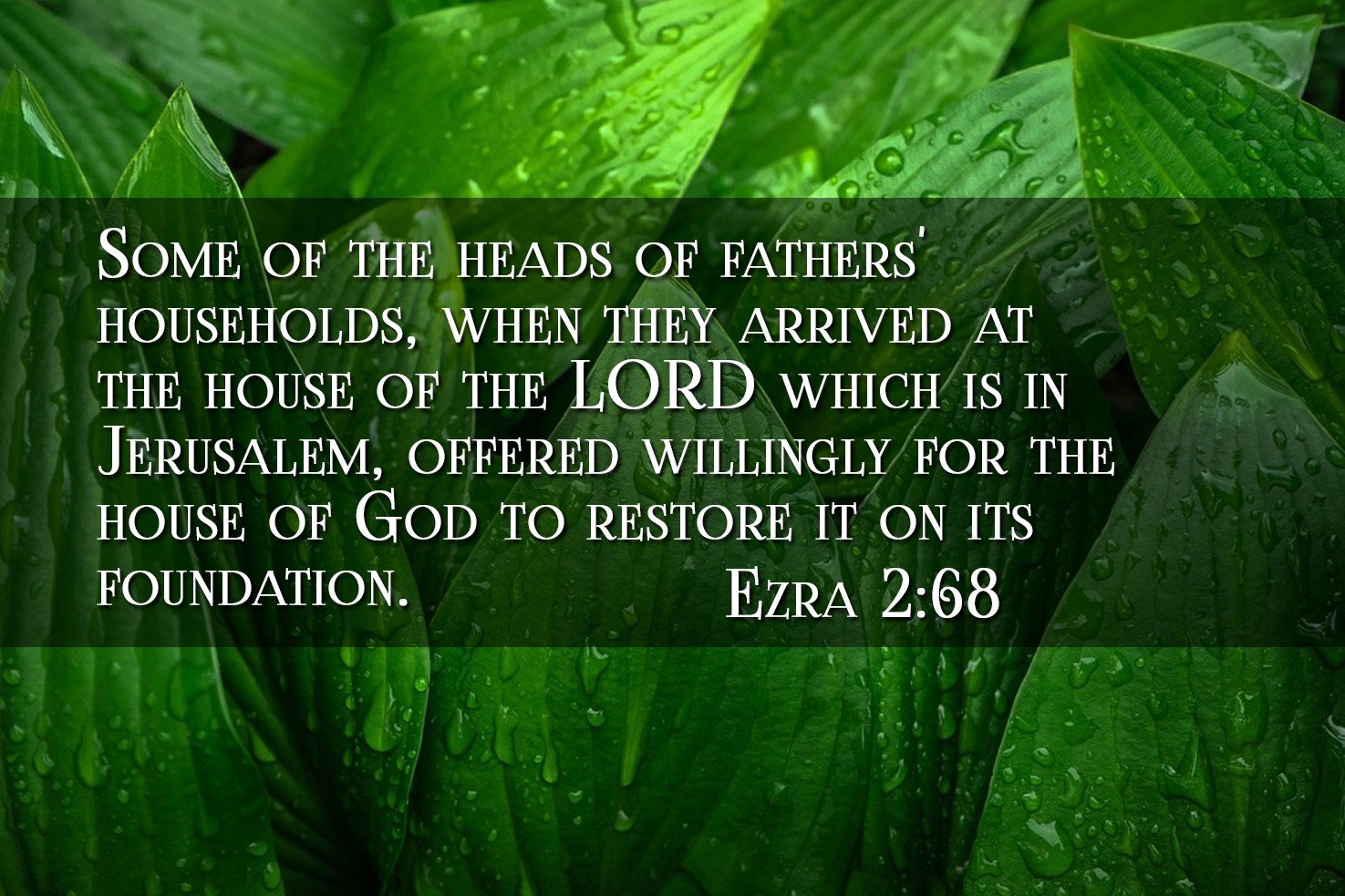 2 Now these were the people of the province who came up out of the captivity of those exiles whom Nebuchadnezzar the king of Babylon had carried captive to Babylonia. They returned to Jerusalem and Judah, each to his own town. They came with Zerubbabel, Jeshua, Nehemiah, Seraiah, Reelaiah, Mordecai, Bilshan, Mispar, Bigvai, Rehum, and Baanah.

All the temple servants and the sons of Solomon's servants were 392.

The following were those who came up from Tel-melah, Tel-harsha, Cherub, Addan, and Immer, though they could not prove their fathers' houses or their descent, whether they belonged to Israel: the sons of Delaiah, the sons of Tobiah, and the sons of Nekoda, 652. Also, of the sons of the priests: the sons of Habaiah, the sons of Hakkoz, and the sons of Barzillai (who had taken a wife from the daughters of Barzillai the Gileadite, and was called by their name). These sought their registration among those enrolled in the genealogies, but they were not found there, and so they were excluded from the priesthood as unclean. The governor told them that they were not to partake of the most holy food, until there should be a priest to consult Urim and Thummim.

Some of the heads of families, when they came to the house of the LORD that is in Jerusalem, made freewill offerings for the house of God, to erect it on its site. According to their ability they gave to the treasury of the work 61,000 darics of gold, 5,000 minas of silver, and 100 priests' garments.

Now the priests, the Levites, some of the people, the singers, the gatekeepers, and the temple servants lived in their towns, and all the rest of Israel in their towns.

Genealogies were very important to the Jewish people.  For them, if they could prove they had descended from Abraham, they were considered true Jews and could fully participate in the Jewish community.  If they could not, their interaction was limited.

What is interesting is Ezra’s name is missing yet he was a key player. Ezra was a priest, a scribe and great leader.  His name means ‘help’ and he lived up to the meaning as his entire life was built around serving God and His people.

Tradition holds Ezra wrote 1 and 2 Chronicles, Ezra, and Psalm 119.  He led a council of 120 men who also put together the Old Testament Canon.  As a humble leader, the book of Ezra was not about himself but about the glory of God and His fulfillment of prophecy of the Jewish nation returning from captivity.  As the last half of this book unfolds we will get a beautiful picture of this godly leader.  He had an unreal insight into the Scripture and was led with tremendous wisdom.  He would lead the people in God’s Word and help reestablish godly life.

Ezra not only knew God’s Word, he believed in it.  He obeyed what God had instructed.  In chapter 9 when he learned of the Israelite’s had intermarried and were worshiping with idolatry he fell on his face and wept for the nation.  He took to hear their disobedience and it would be his humility that would lead people back to God.

What also is interesting to consider is Ezra was a cog in the revival to come to the people.  His initial effort and how he dealt in a godly way with the people would set the stage for Nehemiah to complete God’s purpose.  In fact, when Nehemiah arrived on the scene, he would serve under this man.  Both of them would be part of a national revival that swept the nation.

We are all leaders of some sort.  We may be working in a church, on a committee, in a group.  We may be leaders of a household or at work.  Are we leading in a godly example?  Are we pursuing the things of God?  Are we humble in that leadership which leads people toward God Himself?  And when there is sin or someone that is struggling with something — are we quick to point fingers or do we find ourselves on our knees before the Father interceding on their behalf?

Are you basing your day upon the Word of God and leading from that?  Are you pursuing Him in all things?  These things translate into our daily lives and make an impact even though we may not realize it.  What kind of leader are you?

Why was genealogy so important to the Jews? We see this many times in Scripture and often it’s hard to make it through the list because we don’t know or understand the history. To them it was all about their claim to God. Their lineage as a Jew meant that they were a part of the chosen nation of God and that gave them a claim to declare, “We are His children.” If you were not able to prove it, well, you were outcast until you could. Just look at the verses here in 61-63…

The following priestly clans could find no record to prove their ancestry: Habaiah, Hakkoz, and Barzillai. (The ancestor of the priestly clan of Barzillai had married a woman from the clan of Barzillai of Gilead and had taken the name of his father-in-law’s clan.) Since they were unable to prove who their ancestors were, they were not accepted as priests. 62 (SEE 2:61) 63 The Jewish governor told them that they could not eat the food offered to God until there was a priest who could use the Urim and Thummim.

It appears as if these men married and took the name of their wives. This could have been because she came from a wealthy family and they wanted the inheritance, but most likely, it was a status move as Barzillai was described as a “great man” in Samuel who had associations with King David.

These men were not automatically disqualified from the priesthood, but their identity became questionable because their origin had been severed. We don’t understand it today, but that’s how important genealogy was to the Jews. The changing of your last name pronounced you “unclean” from the priesthood. They would have to wait for Urim and Thummin to vouch for them and their  Israelite heritage. Most scholars believe that the Urim and Thummin were a set of two objects used by the high priest to answer a question or reveal the will of God.

In the same way that the Jews valued what identified them with God, we must do the same. We have a new identity that is found in Christ, and our status as heirs is sealed by the Holy Spirit. In the same way the Jews obsessed over their genealogy, we must obsess over our right to be sons and daughters of God.

How does that work?

When you exhibit the fruit of the Spirit, you work out your faith and your claim to God’s kingdom. I don’t mean “work out” in the sense of earning anything. I mean it in the same way James does when he writes in Chapter 1.

But prove yourselves doers of the word, and not merely hearers who delude themselves.

If we take seriously our calling to be God’s children, we will exhibit His gifts that manifest in our lives through the Holy Spirit. What’s important to God will become important to us as we let His love and His Word lead our lives.