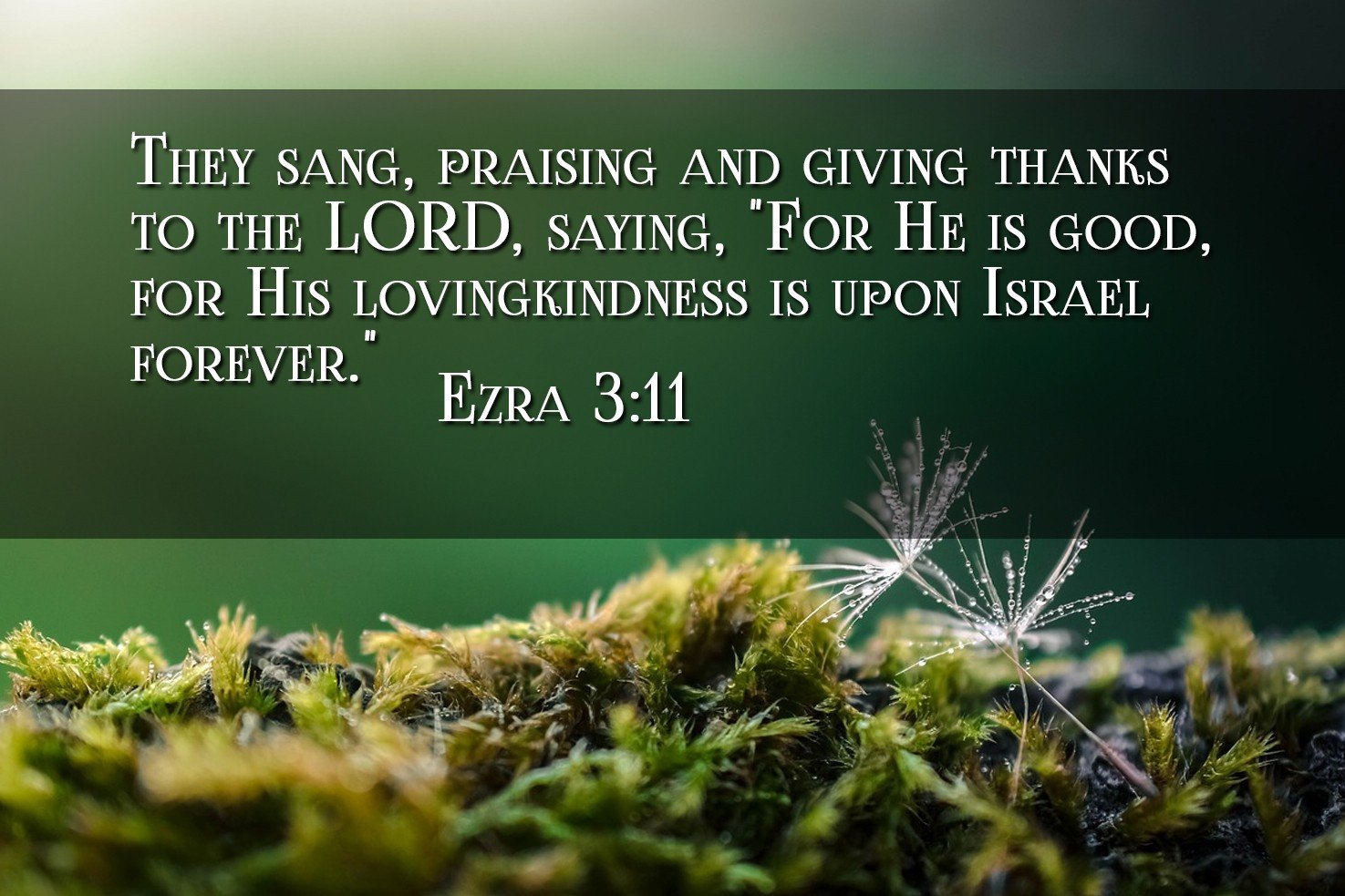 3 When the seventh month came, and the children of Israel were in the towns, the people gathered as one man to Jerusalem. Then arose Jeshua the son of Jozadak, with his fellow priests, and Zerubbabel the son of Shealtiel with his kinsmen, and they built the altar of the God of Israel, to offer burnt offerings on it, as it is written in the Law of Moses the man of God. They set the altar in its place, for fear was on them because of the peoples of the lands, and they offered burnt offerings on it to the LORD, burnt offerings morning and evening. And they kept the Feast of Booths, as it is written, and offered the daily burnt offerings by number according to the rule, as each day required, and after that the regular burnt offerings, the offerings at the new moon and at all the appointed feasts of the LORD, and the offerings of everyone who made a freewill offering to the LORD. From the first day of the seventh month they began to offer burnt offerings to the LORD. But the foundation of the temple of the LORD was not yet laid. So they gave money to the masons and the carpenters, and food, drink, and oil to the Sidonians and the Tyrians to bring cedar trees from Lebanon to the sea, to Joppa, according to the grant that they had from Cyrus king of Persia.

Now in the second year after their coming to the house of God at Jerusalem, in the second month, Zerubbabel the son of Shealtiel and Jeshua the son of Jozadak made a beginning, together with the rest of their kinsmen, the priests and the Levites and all who had come to Jerusalem from the captivity. They appointed the Levites, from twenty years old and upward, to supervise the work of the house of the LORD. And Jeshua with his sons and his brothers, and Kadmiel and his sons, the sons of Judah, together supervised the workmen in the house of God, along with the sons of Henadad and the Levites, their sons and brothers.

And when the builders laid the foundation of the temple of the LORD, the priests in their vestments came forward with trumpets, and the Levites, the sons of Asaph, with cymbals, to praise the LORD, according to the directions of David king of Israel. And they sang responsively, praising and giving thanks to the LORD,

“For he is good,
for his steadfast love endures forever toward Israel.”

And all the people shouted with a great shout when they praised the LORD, because the foundation of the house of the LORD was laid. But many of the priests and Levites and heads of fathers' houses, old men who had seen the first house, wept with a loud voice when they saw the foundation of this house being laid, though many shouted aloud for joy, so that the people could not distinguish the sound of the joyful shout from the sound of the people's weeping, for the people shouted with a great shout, and the sound was heard far away.

Where God calls, He will equip!

This is something we must be reminded of again and again on this journey of ours.  The plan of God is ever before us and in His timing He reveals little snippets here and there for us to grab hold of.  It always comes to a point for each of us though as to if we will go forward or remain.

It’s scary no doubt.  Especially when He calls us toward unknown waters and depths where we feel as though we have no idea of how it will come together.  This is part of our duty in faith to step out and go where He has led so far.  Many times there feels like there’s nothing tangible to grasp hold  of.  That said, the deeper waters to where He is beckoning each of us has one thing – the Cornerstone, the Rock that is higher than us to place our feet upon.  Yet many times God will not reveal his next step for us until we actually step out.

I am convinced this is where the separation of fulfillment in our lives is at a crossroads. Meaning, there are many who become so caught up in the whole ‘what if’ and ‘how will this work out?’ questions that they simply stay where they are.

Don’t get me wrong, these questions are natural and definitely a part of our journey.  But if we get bogged down in the questions we will fail to move forward.  We will miss the unreal unfolding of His grace and purpose for our lives.

The returned Israelite’s had settled in their towns and returned to Jerusalem to meet and hear the plan of God delivered through the priest as to what would take place next.  The priest Jeshua and his associates began to build an altar to God and offer a sacrifice.  Here’s what’s interesting…

“So they set up the altar on its foundation, for they were terrified because of the peoples of the lands; and they offered burnt offerings on it to the Lord, burnt offerings morning and evening.” Ezra 3:3

Though there was fear on the Israelite’s part – they were committed to do what God had called of them to do.  They pursued obedience instead of allowing their fear to riddle their actions.

You may be at a crossroads of sorts.  There may be a lot of questions and fears that are bombarding your thoughts.  Good grief, maybe you’re even looking at the situation and asking “How in the world can this ever work out?!”

Let me remind you, God who has called, will equip.  We serve a God who is the Creator of all things and all things are possible with Him.  He is revealing possibly just a snippet of His will and asking you to step out and follow.  Will you allow the fears to dictate your response or your trust in Him?

Yet many of the priests and Levites and heads of fathers’ households, the old men who had seen the first temple, wept with a loud voice when the foundation of this house was laid before their eyes, while many shouted aloud for joy,  13  so that the people could not distinguish the sound of the shout of joy from the sound of the weeping of the people, for the people shouted with a loud shout, and the sound was heard far away.

About 50 years had passed since Solomon’s great temple was destroyed. All of the men 60 years and older would have vividly remembered what it used to look like. There is no doubt that this new foundation being laid would pale in comparison to the great structure of Solomon’s time. And so it was the older men who wailed with sorrow at what used to be. There’s no doubt that they would reflect back to all that had been lost. Take into consideration the differences that existed between then and now…

Blended among the loud weeping voices were shouts of pure joy! The younger people who had been through the exile were now so excited to rebuild the temple that they burst forth in praise that could be heard for miles away. They joyfully expressed the opportunity that was before them and thanked God for it.

This is a familiar metaphor for life. Sometimes we long for the days of old, but we also are thankful and looking forward to new opportunities. Although this temple lacked all of the bullet points above, it had one aspect that was greater than Solomon’s structure. The Messiah, Jesus Christ, would one day walk the courts of the temple that Zerubbabel built.

I think the encouragement for me in this chapter is that although things may never be the same, God always has a plan. Though we cannot take back our past actions or decisions, we serve the God of second chances. When we look upon a situation and think that it will never live up to what used to be, it may be that God allowed that situation so something even greater could be experienced in it and through it. We serve an amazing, mysterious God who always delivers on His promises.