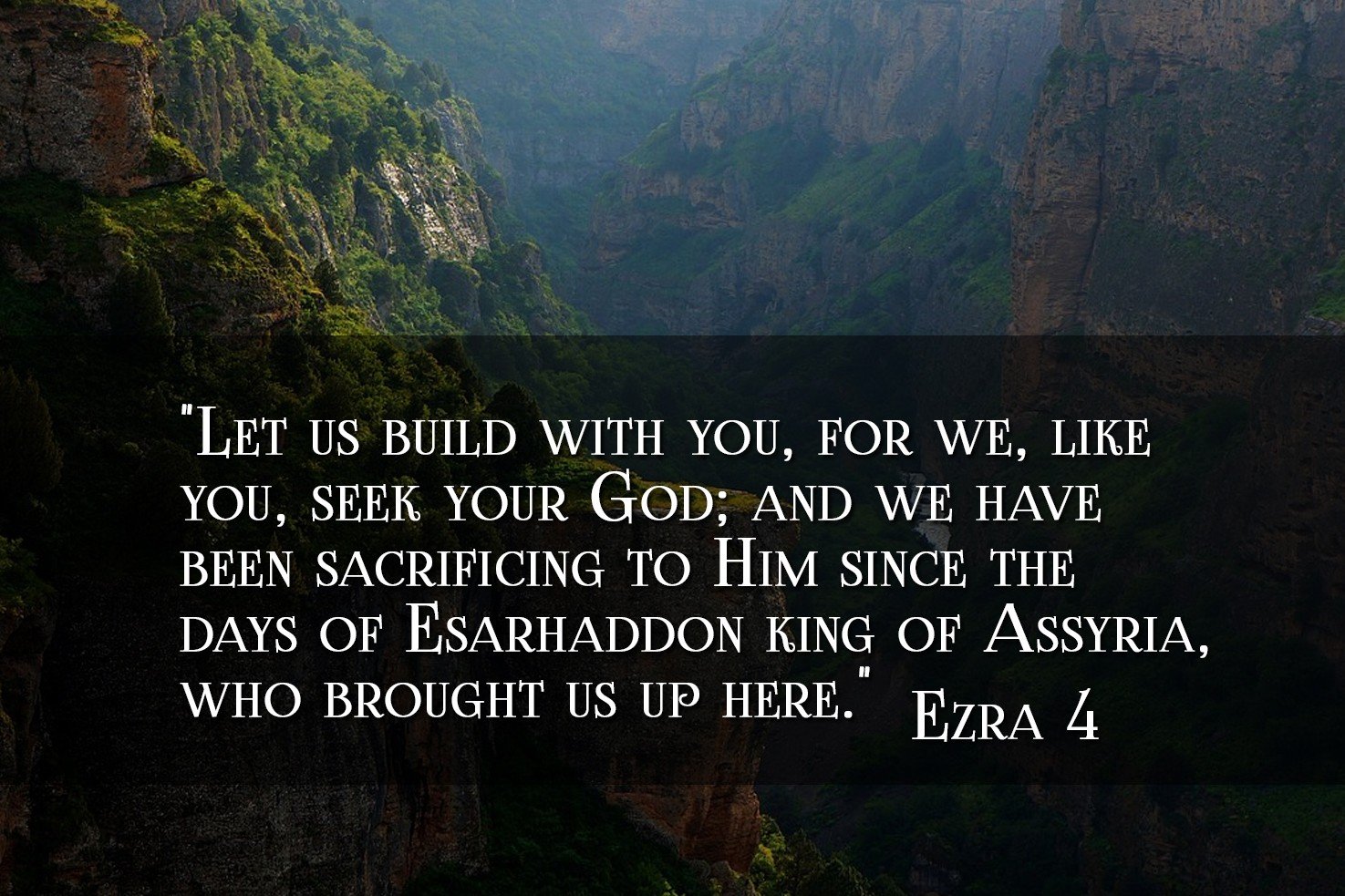 4 Now when the adversaries of Judah and Benjamin heard that the returned exiles were building a temple to the LORD, the God of Israel, they approached Zerubbabel and the heads of fathers' houses and said to them, “Let us build with you, for we worship your God as you do, and we have been sacrificing to him ever since the days of Esarhaddon king of Assyria who brought us here.” But Zerubbabel, Jeshua, and the rest of the heads of fathers' houses in Israel said to them, “You have nothing to do with us in building a house to our God; but we alone will build to the LORD, the God of Israel, as King Cyrus the king of Persia has commanded us.”

And in the reign of Ahasuerus, in the beginning of his reign, they wrote an accusation against the inhabitants of Judah and Jerusalem.

The Letter to King Artaxerxes

The King Orders the Work to Cease

The king sent an answer: “To Rehum the commander and Shimshai the scribe and the rest of their associates who live in Samaria and in the rest of the province Beyond the River, greeting. And now the letter that you sent to us has been plainly read before me. And I made a decree, and search has been made, and it has been found that this city from of old has risen against kings, and that rebellion and sedition have been made in it. And mighty kings have been over Jerusalem, who ruled over the whole province Beyond the River, to whom tribute, custom, and toll were paid. Therefore make a decree that these men be made to cease, and that this city be not rebuilt, until a decree is made by me. And take care not to be slack in this matter. Why should damage grow to the hurt of the king?”

Then, when the copy of King Artaxerxes' letter was read before Rehum and Shimshai the scribe and their associates, they went in haste to the Jews at Jerusalem and by force and power made them cease. Then the work on the house of God that is in Jerusalem stopped, and it ceased until the second year of the reign of Darius king of Persia.

Obstacles are a part of life.  We run into many of these in every situation we face.  When we are doing the work of God, fulfilling the calling He has for us – they come sometimes at full force.  When God calls us to a work, it doesn’t matter the size or the gravity of the end result, there will be opposition.

For some, this is where the rubber meets the road as some become discouraged and give up. For others, it only sinks them further into God and a determination to work through them to see the vision that was given be fulfilled.

As the Jewish people had settled back into their home country and began the rebuilding of the temple, they found themselves opposed by people to the work.  These enemies of Judah and Benjamin were people who had relocated back as well.  Although initially they acted and offered their help to rebuild, their goal was to disrupt the project.  Their goal was not to see the Temple completed but to keep an eye on what the people were doing and in the end keep Jerusalem from becoming a strong city again.

The sad truth to this portion of the story is first those who are not committed and dedicated to God’s purpose have no part in His work.  The second thing is often these who show themselves to be instigators of trouble sometimes were part of the group to begin with.  Meaning, some of these were originally Israelite’s but because they were fearful in losing what they had they decided to do everything within their means to stop the work.  Sometimes opposition comes from within.

With much discernment, the people committed to the work of God saw through their tactics.  Had they partnered with them, an absolute compromise of their faith and mission would have taken place.  The motive of these people was seen immediately as when their help was turned down, they began to discourage the people of Judah, striking fear within.

The reality is unbelievers and yes, spiritual forces are at work to stop the work of God and the work He wants to do in His people as well.  They use many age-old tactics of discouragement, intimidation compromise and accusations. We must expect such things because they are going to happen.   The question really becomes will we stick to the vision God has given us?  Will we heed the commission and project He’s put on our hearts and plow through regardless?  Will we continue to move ahead in the work He has planned for us and trust Him to help us overcome the obstacles?

The bold truth to claim this day is even if obstacles come and yes projects or callings are delayed – God will not be deterred by the will of men.  Where does this resonate with you in a situation you are dealing with?

We hear this phrase spoken all the time. In some cases, it’s definitely true. In others, however, it almost seems like a rationalization. We all do it. Most times it’s just easier to be indifferent to a situation and throw up your hands in helplessness. The Bible, however, would tell us otherwise. In fact, the Bible continually illustrates that when we face trials and setbacks, we are to patiently endure and continue to grow. Convicting, but true.

Take Daniel, for instance. He was sent into exile and never was able to see Israel again. He endured under kings and leaders who didn’t share his zeal for God. But what did he do? Shrug his shoulders? “It is what it is.”

I guess my real question is, do you stay there, or do you move forward?

Daniel refused to stay there. He stuck to the vision. He pursued the Lord. He never stopped opening his window and praying to his King.

In Ezra 4, the people face opposition when trying to complete the temple rebuild. It seems from reading this chapter that there wasn’t much they could do about it. Let’s see the same story from a different perspective…

It sounds to me like this phrase, “The time has not come…” became an excuse for the people. We can conclude from this text that they became complacent and comfortable as soon as opposition struck. They were concerned with their own belongings over building a house for the Lord. Notice that when God addresses them, he calls them “this people,” and not “My people.” They were not invested in the ways of God.

Where does this hit you today? When we look at the life of Daniel, I wholeheartedly believe that even though he faced struggles and obstacles, he believed God was growing him and using him within those circumstances. I believe that today, we must ask ourselves, “How can I grow in perseverance to be more like Christ in this situation?”

We may always toss out an occasional, “It is what it is,” but the real question becomes, will you go back and “hide” in your own house, or will you step out and pursue the dream that the Lord commanded? At the very least, will you believe there is something more and hit your knees in prayer? Consider your ways.