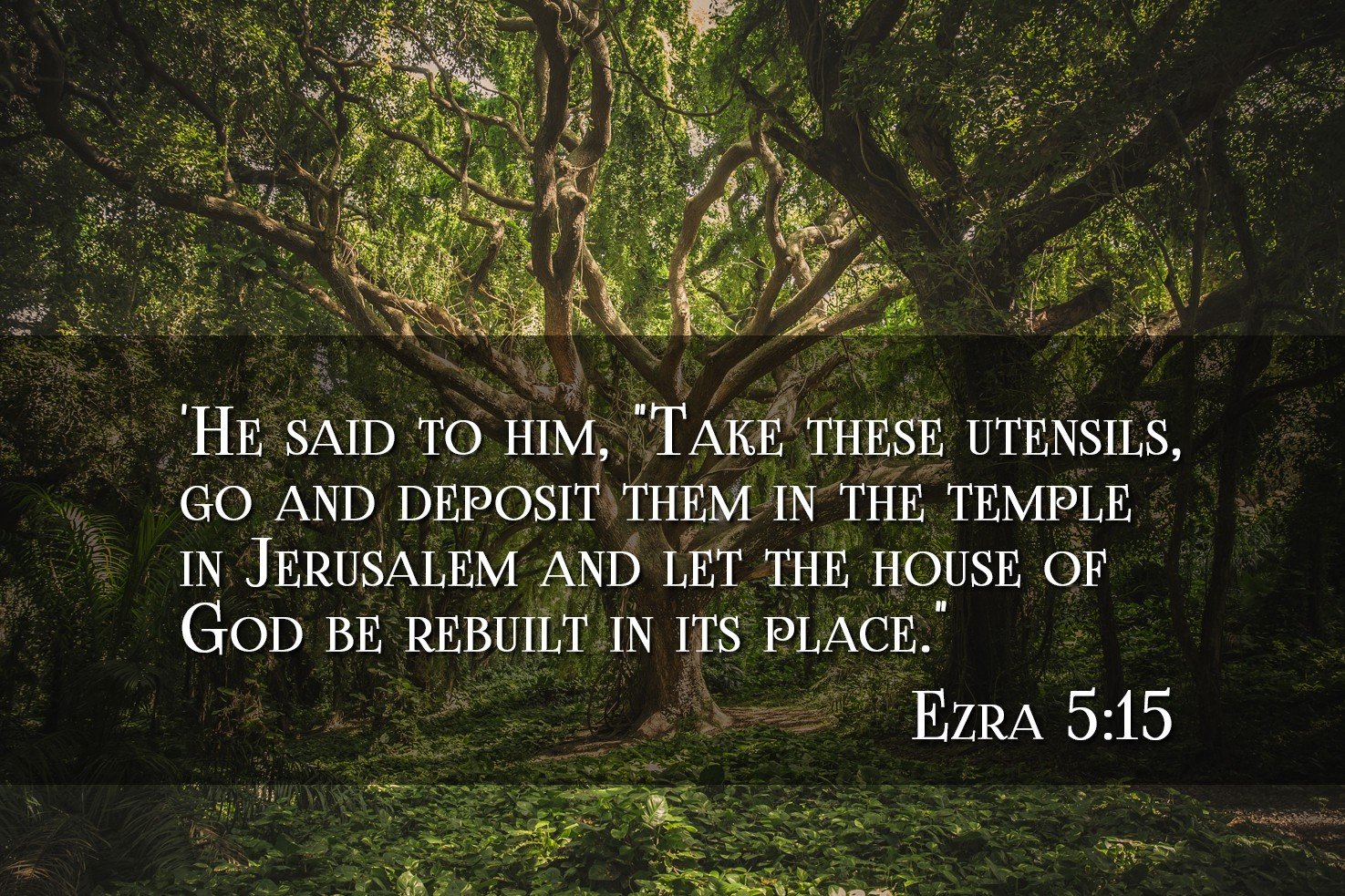 5 Now the prophets, Haggai and Zechariah the son of Iddo, prophesied to the Jews who were in Judah and Jerusalem, in the name of the God of Israel who was over them. Then Zerubbabel the son of Shealtiel and Jeshua the son of Jozadak arose and began to rebuild the house of God that is in Jerusalem, and the prophets of God were with them, supporting them.

At the same time Tattenai the governor of the province Beyond the River and Shethar-bozenai and their associates came to them and spoke to them thus: “Who gave you a decree to build this house and to finish this structure?” They also asked them this: “What are the names of the men who are building this building?” But the eye of their God was on the elders of the Jews, and they did not stop them until the report should reach Darius and then an answer be returned by letter concerning it.

This is a copy of the letter that Tattenai the governor of the province Beyond the River and Shethar-bozenai and his associates, the governors who were in the province Beyond the River, sent to Darius the king. They sent him a report, in which was written as follows: “To Darius the king, all peace. Be it known to the king that we went to the province of Judah, to the house of the great God. It is being built with huge stones, and timber is laid in the walls. This work goes on diligently and prospers in their hands. Then we asked those elders and spoke to them thus: ‘Who gave you a decree to build this house and to finish this structure?’ We also asked them their names, for your information, that we might write down the names of their leaders. And this was their reply to us: ‘We are the servants of the God of heaven and earth, and we are rebuilding the house that was built many years ago, which a great king of Israel built and finished. But because our fathers had angered the God of heaven, he gave them into the hand of Nebuchadnezzar king of Babylon, the Chaldean, who destroyed this house and carried away the people to Babylonia. However, in the first year of Cyrus king of Babylon, Cyrus the king made a decree that this house of God should be rebuilt. And the gold and silver vessels of the house of God, which Nebuchadnezzar had taken out of the temple that was in Jerusalem and brought into the temple of Babylon, these Cyrus the king took out of the temple of Babylon, and they were delivered to one whose name was Sheshbazzar, whom he had made governor; and he said to him, “Take these vessels, go and put them in the temple that is in Jerusalem, and let the house of God be rebuilt on its site.” Then this Sheshbazzar came and laid the foundations of the house of God that is in Jerusalem, and from that time until now it has been in building, and it is not yet finished.’ Therefore, if it seems good to the king, let search be made in the royal archives there in Babylon, to see whether a decree was issued by Cyrus the king for the rebuilding of this house of God in Jerusalem. And let the king send us his pleasure in this matter.”

So often, discouragement and depression set in through lack of tangibly seeing any results.  All we’ve staked our minds on and felt in the spiritual realm God was asking of us to pursue have come to an abrupt halt.  It’s a hard place to crawl out of.

I’ve been here countless times.  God has placed a vision on my heart and called me to pursue it against all odds.  And there always are several moments on that journey when things completely stopped.  From my own perspective, there was no movement.  Days turned into weeks, sometimes months and even years with little to no revelation of God’s hand stirring the waters of what He was doing.

The crazy thing was I wanted to release the vision.  I wanted to move on and say, “Okay, I tried.  I guess I was wrong with what I thought I heard God say.”  But He wouldn’t let me.  The burden of seeing accomplished what God had spoke burned in my heart.  But that part of the journey always feels the loneliest.  It is the one where discouragement sets in and depression is biting at my heels.  Admittedly, I wallow in these feelings for a bit.

The work of the rebuilding of the Temple was stopped by force by those set against it happening.  The people felt defeated.  It seemed as though the enemy had won.  But God’s work was going to happen no matter what man had tried to do.  After the second year of King Darius’ reign, some say it may have been up to 10 years passing, God began to stir key individuals.

Zerubbabel was a prince in the line of King David.  Jeshua was the High Priest.  Haggai and Zechariah were prophets who rose up and began speaking hope.  However, these not only gave words of encouragement, they got their hands dirty and got involved.  The rebuilding resumed.

There is a great challenge to consider our own role when in ministry something has come to a standstill.  If we are the ones who are discouraged, it’s far too easy to sink into that and not seek out those who can bring encouragement despite.  We need those people in our lives who can redirect our thoughts back to the character of God, the mission He has set before us and challenge our ways to reflect a trust in Him despite what is happening currently. If we are on the other side and see another who is struggling with discouragement – we need to step in and not only redirect their thinking by bringing encouragement, we need to get involved.

There are times when the pursuit of a vision or dream by God comes to a stop. It doesn’t mean the vision is over.  It simply means His timing is not as ours.  He will have His way regardless and His Word will stand.

When it appears that things have been brought to a standstill – we must still stand strong in Him.

Let’s get a quick background on the characters involved in the temple rebuild. Haggai and Zechariah are the prophets of the Lord. They are encouraging the people, specifically, the leaders, to get back to building the temple. At this point, there has been a 60-year hiatus from their original project! Zerubbabel the son of Shealtiel was basically the political leader of the nation. Joshua son of Jehozadak would have been the high priest, or, religious leader at the time.

In the book of Haggai, the people receive a strong message through these prophets to continue with the work despite the circumstances. Specifically, Zerubbabel and Joshua are spoken to directly by God through Haggai.

Although God granted them the permission and motivation to build, they were scared by the threats. They went into the project worried about how they would respond if they were challenged. They wondered, what will happen to us? The Lord encourages them, and they get back to work.

Why did this all take place? Why did this project get delayed for so long? It was all about trust. The people and leaders of Israel needed time to change their attitude towards God. It’s not some shocking new revelation. It happens in our daily lives all the time. A lot of us get really encouraged to follow Christ in some way, and then a speed bump comes along and we forget who is the ultimate authority.

The people of Israel had two choices. They could believe that their fate was in the hands of enemy nations, or believe that God was with them. When the time came to defend themselves, God gave them the words and the path to follow. The Lord fights for His people.

This has helped this morning. I find so much anger when dealing with a situation that is clearly in my path. Trusting GOD and believing He will move on this person is what I cling to. He is able.