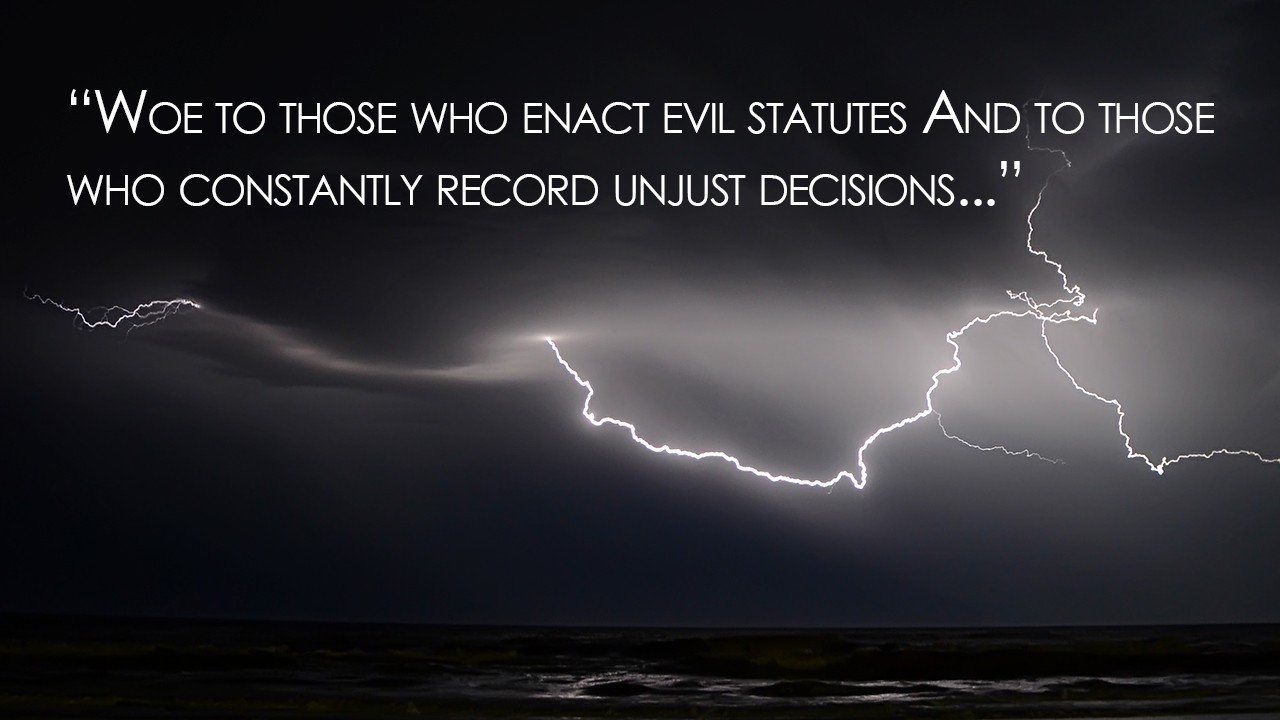 10   Woe to those who decree iniquitous decrees,
and the writers who keep writing oppression,
to turn aside the needy from justice
and to rob the poor of my people of their right,
that widows may be their spoil,
and that they may make the fatherless their prey!
What will you do on the day of punishment,
in the ruin that will come from afar?
To whom will you flee for help,
and where will you leave your wealth?
Nothing remains but to crouch among the prisoners
or fall among the slain.
For all this his anger has not turned away,
and his hand is stretched out still.

Woe to Assyria, the rod of my anger;
the staff in their hands is my fury!
Against a godless nation I send him,
and against the people of my wrath I command him,
to take spoil and seize plunder,
and to tread them down like the mire of the streets.
But he does not so intend,
and his heart does not so think;
but it is in his heart to destroy,
and to cut off nations not a few;
for he says:
“Are not my commanders all kings?
Is not Calno like Carchemish?
Is not Hamath like Arpad?
Is not Samaria like Damascus?
As my hand has reached to the kingdoms of the idols,
whose carved images were greater than those of Jerusalem and Samaria,
shall I not do to Jerusalem and her idols
as I have done to Samaria and her images?”

When the Lord has finished all his work on Mount Zion and on Jerusalem, he will punish the speech of the arrogant heart of the king of Assyria and the boastful look in his eyes. For he says:

“By the strength of my hand I have done it,
and by my wisdom, for I have understanding;
I remove the boundaries of peoples,
and plunder their treasures;
like a bull I bring down those who sit on thrones.
My hand has found like a nest
the wealth of the peoples;
and as one gathers eggs that have been forsaken,
so I have gathered all the earth;
and there was none that moved a wing
or opened the mouth or chirped.”
Shall the axe boast over him who hews with it,
or the saw magnify itself against him who wields it?
As if a rod should wield him who lifts it,
or as if a staff should lift him who is not wood!
Therefore the Lord GOD of hosts
will send wasting sickness among his stout warriors,
and under his glory a burning will be kindled,
like the burning of fire.
The light of Israel will become a fire,
and his Holy One a flame,
and it will burn and devour
his thorns and briers in one day.
The glory of his forest and of his fruitful land
the LORD will destroy, both soul and body,
and it will be as when a sick man wastes away.
The remnant of the trees of his forest will be so few
that a child can write them down.

The Remnant of Israel Will Return

In that day the remnant of Israel and the survivors of the house of Jacob will no more lean on him who struck them, but will lean on the LORD, the Holy One of Israel, in truth. A remnant will return, the remnant of Jacob, to the mighty God. For though your people Israel be as the sand of the sea, only a remnant of them will return. Destruction is decreed, overflowing with righteousness. For the Lord GOD of hosts will make a full end, as decreed, in the midst of all the earth.

Therefore thus says the Lord GOD of hosts: “O my people, who dwell in Zion, be not afraid of the Assyrians when they strike with the rod and lift up their staff against you as the Egyptians did. For in a very little while my fury will come to an end, and my anger will be directed to their destruction. And the LORD of hosts will wield against them a whip, as when he struck Midian at the rock of Oreb. And his staff will be over the sea, and he will lift it as he did in Egypt. And in that day his burden will depart from your shoulder, and his yoke from your neck; and the yoke will be broken because of the fat.”

He has come to Aiath;
he has passed through Migron;
at Michmash he stores his baggage;
they have crossed over the pass;
at Geba they lodge for the night;
Ramah trembles;
Gibeah of Saul has fled.
Cry aloud, O daughter of Gallim!
Give attention, O Laishah!
O poor Anathoth!
Madmenah is in flight;
the inhabitants of Gebim flee for safety.
This very day he will halt at Nob;
he will shake his fist
at the mount of the daughter of Zion,
the hill of Jerusalem.
Behold, the Lord GOD of hosts
will lop the boughs with terrifying power;
the great in height will be hewn down,
and the lofty will be brought low.
He will cut down the thickets of the forest with an axe,
and Lebanon will fall by the Majestic One.

Assyria had no clue they were part of God’s plan in the judgement of Israel.  They were a brutal people. Their power was strong.  Their pride ran high.  Arrogance oozed from them.  They continued to grow in power and strength throughout the region.  Little did they know that kingdoms rise and fall through the Lord’s sovereignty.  He would use this nation to bring punishment to Israel for many of their sins but in the end they would be judged as well.

Israel found themselves in the place they were for many reasons.  They had turned to the gods of the pagans.  They had set their own standards and neglected the ones established by God.  They had oppressed the needy and judged cases for their own benefit.  Rendering the poor even more powerless and without rights, they became ‘fat cats’ as the sea of need was ignored.

Historically, the Assyrians were used to bring the pressure of discipline on Israel.  But that would come to an end in time.  Their downfall began in 701 BC when an angel of the slain over 185,000 soldiers.  By 612 BC their capital city of Nineveh was destroyed.  They never regained power as Babylon beat them down to be no more.

God accomplishes His plan despite people.  This is something we each must hold onto when our life or our world even seems out of control.  He will still have the last word and yes, He is still in control.  Truly in a twist of thinking, He will use whatever means necessary to draw people back to Him.  That’s His ultimate goal.

‘Woe” is a dangerous word in Scripture. Chapter 10 kicks off with God using this word as a warning of the severe consequences to come.  It is the deprivation of the poor and needy from justice that triggers such a response. Bottom line: God has always cared about social issues. In this context, the Lord is speaking to the Northern Kingdom of Israel, and specifically it’s capital of Samaria.

This language is familiar. We read this same word (Woe) used by Jesus to the Pharisees for the exact same reasons that God is speaking of in Isaiah. Matthew 23 is a whole chapter chock full of rebuke for those in authority who took advantage of, or neglected, the poor and needy.

The greatest one among you must be your servant. 12 Whoever makes himself great will be humbled, and whoever humbles himself will be made great. 13 “How terrible for you, teachers of the Law and Pharisees! You hypocrites! You lock the door to the Kingdom of heaven in people’s faces, but you yourselves don’t go in, nor do you allow in those who are trying to enter!

This raises an interesting question. Where are we overlooking opportunities to serve the less fortunate and thus keeping them from the Kingdom of God? Now, I’m not talking about blatant manipulation. I’m talking about ways in which we don’t even notice. The Pharisees were blind to their own hypocrisy. God, help us to see where our flesh is working against Your Kingdom.