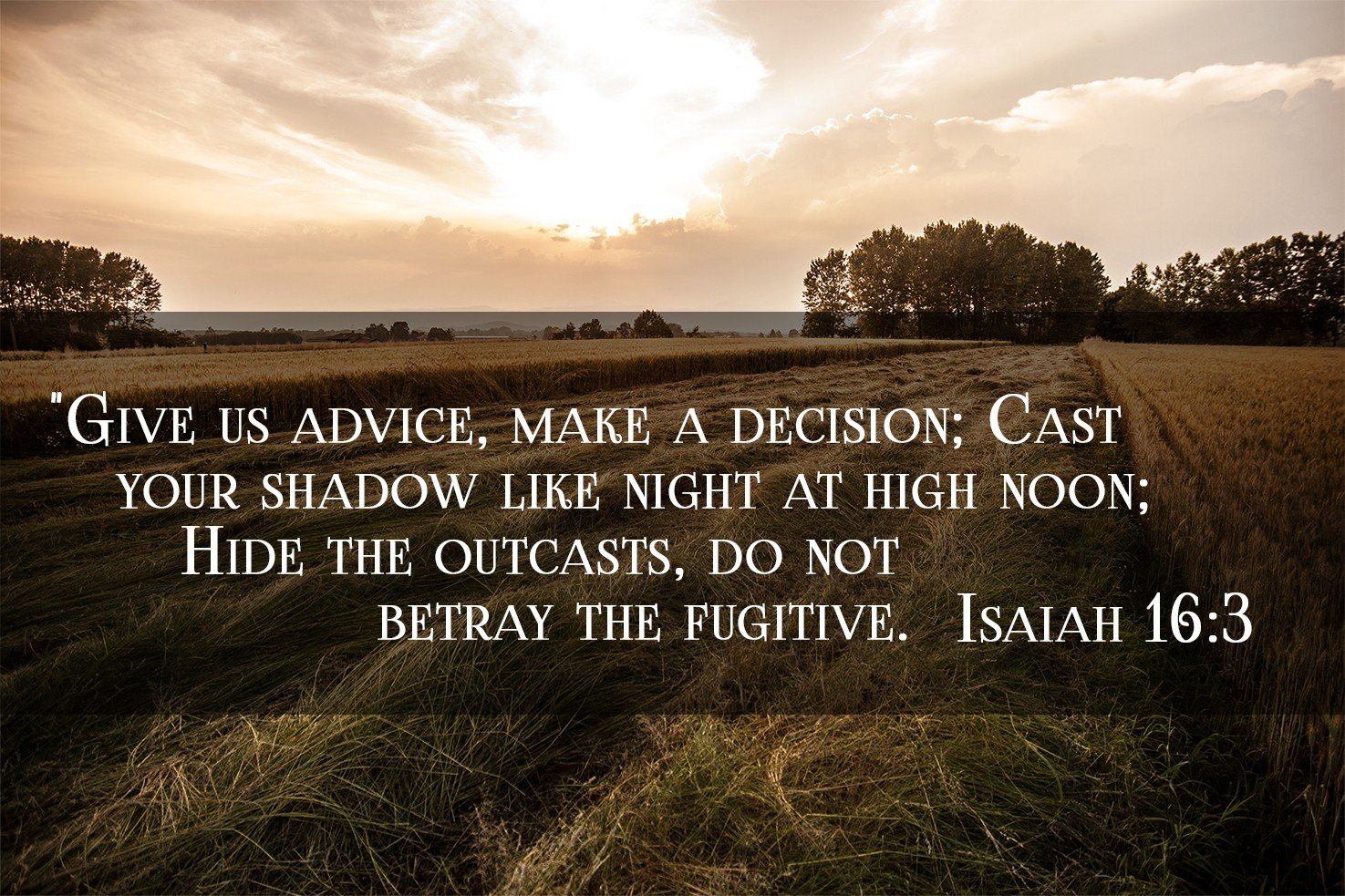 16   Send the lamb to the ruler of the land,
from Sela, by way of the desert,
to the mount of the daughter of Zion.
Like fleeing birds,
like a scattered nest,
so are the daughters of Moab
at the fords of the Arnon.
“Give counsel;
grant justice;
make your shade like night
at the height of noon;
shelter the outcasts;
do not reveal the fugitive;
let the outcasts of Moab
sojourn among you;
be a shelter to them
from the destroyer.
When the oppressor is no more,
and destruction has ceased,
and he who tramples underfoot has vanished from the land,
then a throne will be established in steadfast love,
and on it will sit in faithfulness
in the tent of David
one who judges and seeks justice
and is swift to do righteousness.”
We have heard of the pride of Moab—
how proud he is!—
of his arrogance, his pride, and his insolence;
in his idle boasting he is not right.
Therefore let Moab wail for Moab,
let everyone wail.
Mourn, utterly stricken,
for the raisin cakes of Kir-hareseth.
For the fields of Heshbon languish,
and the vine of Sibmah;
the lords of the nations
have struck down its branches,
which reached to Jazer
and strayed to the desert;
its shoots spread abroad
and passed over the sea.
Therefore I weep with the weeping of Jazer
for the vine of Sibmah;
I drench you with my tears,
O Heshbon and Elealeh;
for over your summer fruit and your harvest
the shout has ceased.
And joy and gladness are taken away from the fruitful field,
and in the vineyards no songs are sung,
no cheers are raised;
no treader treads out wine in the presses;
I have put an end to the shouting.
Therefore my inner parts moan like a lyre for Moab,
and my inmost self for Kir-hareseth.

And when Moab presents himself, when he wearies himself on the high place, when he comes to his sanctuary to pray, he will not prevail.

This is the word that the LORD spoke concerning Moab in the past. But now the LORD has spoken, saying, “In three years, like the years of a hired worker, the glory of Moab will be brought into contempt, in spite of all his great multitude, and those who remain will be very few and feeble.”

We’ve all witnessed it.  Maybe we ourselves did the same.  God began putting a finger on some area of our life, revealing our waywardness; showing our pride.  He revealed through hardship or difficult areas where He is calling for change.  We don’t want to hear it, so we turn down the volume of His voice – or at least attempt to.  We busy ourselves with mindless activities.  We’ll do anything we can not to take heed to the voice of the Spirit of God who is penetrating our thoughts and calling us deeper.

I often pray for the ones whom God is working in that He will not relent in such times.  I ask He will do whatever it takes to break their will, their pride to whatever it is He’s revealing.  Many times they have to come to an end of themselves before they’re willing to listen and obey.

These are tough prayers.

Moab was on the hot seat.  In detail God reveals He is going to break their pride and arrogance.  Even in the difficulty and upheaval they turned toward their gods and idols instead of Him (Isaiah 16:12).  They turned down the volume of His voice and pursued their own train of thought.  They busied themselves with religious activities that were fruitless and a dead end. God would have His way and humble this people.

Where is the Holy Spirit moving upon you these days?  Where is He pressing in on some thought and all toward change?  No amount of disregard will squelch His voice.  He’s calling and working on you because He wants to see change and yes even future impact for the Kingdom of Christ.  Turn.  Listen.  Confess.  Adjust.

Though Moab’s nation was broken to pieces, they had far more hope through Salvation than did Babylon or Philistia. The language describing the destruction of Moab offers much hope. In fact, we read in the previous chapter that a remnant would remain. Eventually, Jesus Christ’s lineage would run through Ruth, one of the most famous Moabites in Scripture.

Restoration would come, but for now, the weight of their struggle was real. God was breaking their proud and arrogant hearts so He could fill them with something beautiful. For those that humble themselves to the Lord, struggle and hardship will not last forever. In this life, or the next, we will be completely restored beyond belief.

However, the refinement process is not easy. It can be the fight of our lives! Though Isaiah’s heart broke for Moab, he knew, in the end, that the Lord would have His way. He also trusted that this was best for the spiritual condition of the Moabites. These themes are impossible to comprehend without faith. We must first be given eyes to see the Lord, and a lot of times that takes place through hardship and struggle. If we never bow the knee, we will never fulfill our spiritual purpose.