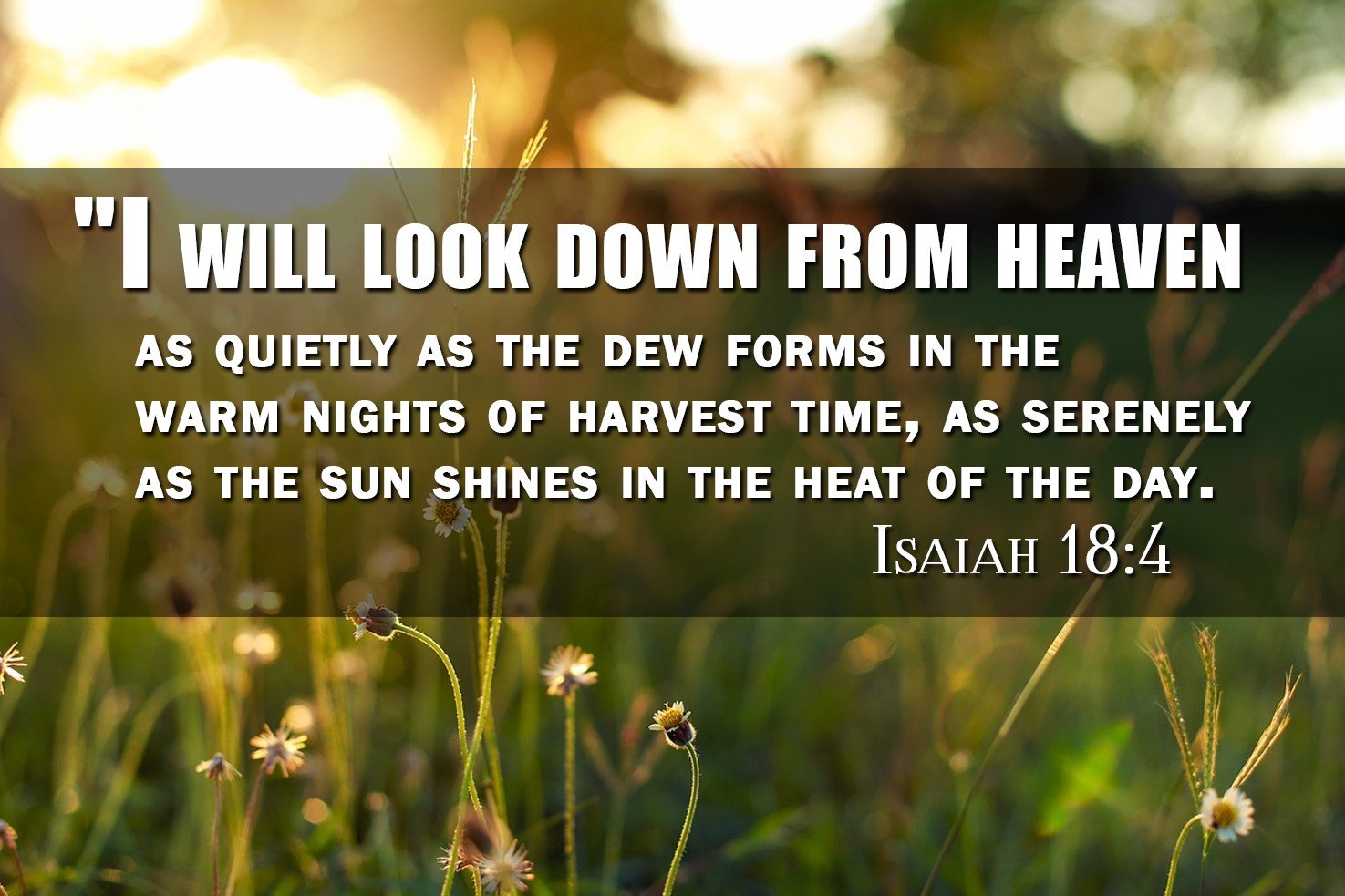 18   Ah, land of whirring wings
that is beyond the rivers of Cush,
which sends ambassadors by the sea,
in vessels of papyrus on the waters!
Go, you swift messengers,
to a nation tall and smooth,
to a people feared near and far,
a nation mighty and conquering,
whose land the rivers divide.
All you inhabitants of the world,
you who dwell on the earth,
when a signal is raised on the mountains, look!
When a trumpet is blown, hear!
For thus the LORD said to me:
“I will quietly look from my dwelling
like clear heat in sunshine,
like a cloud of dew in the heat of harvest.”
For before the harvest, when the blossom is over,
and the flower becomes a ripening grape,
he cuts off the shoots with pruning hooks,
and the spreading branches he lops off and clears away.
They shall all of them be left
to the birds of prey of the mountains
and to the beasts of the earth.
And the birds of prey will summer on them,
and all the beasts of the earth will winter on them.

from a people tall and smooth,
from a people feared near and far,
a nation mighty and conquering,
whose land the rivers divide,

to Mount Zion, the place of the name of the LORD of hosts.

It’s one of the briefest chapters in Isaiah and according to commentators, the most difficult to understand.  Chapter 18 is obscure but there is a truth to be grasped.

During Isaiah’s time Ethiopia was a strong political power.  The Assyrians were making their way to overtake land and thrones of the strong, seeking to make a name for themselves.  Ethiopia to the south did not want to lose what they had gained politically.  Judah was in the center of this conflict.  With envoy sent, the Ethiopian government sought to have a political alliance with Judah so they could resist.  Although politically this may make sense, God rejected the offer of help from the Ethiopians.

He could deal with the Assyrians Himself.  His dealing would be in His timing not through a forced hand or alliance.

What was God saying?  Trust me.

Sometimes there are ‘deals’ that seem good and right in even our daily routine.  There is such a need for us to pursue wisdom and discernment in such instances.  And sometimes, God simply says, “No, just trust me”.  In particular when we want to take matters into our own hands and force an issue.

Where in your life is God speaking to go against the logic and says simply “Trust Me”?

I believe that chapter 18 is an expansion of Isaiah 17:12-14. The flow between the two chapters speaks to the hand of God being involved in all details of future events. Although there is much debate over exactly what (or whom) Isaiah 18 is speaking of, we can still digest some powerful truth bombs from the chapter.

The Lord compares His looking upon us as the serene sunshine that is present all day long. I wonder, do we really view God in that way? Do we live like we are continually watched like the radiant warmth from the sun? How would this affect our behavior if we are constantly reminded of His presence?

The Lord will destroy His enemies as quickly as a sharp knife cuts through a small tree branch. His powerful is unending. It is unimaginable. It’s incomprehensible. Even when the Lord “rests” His great power and sovereignty is clearly seen. Where in our lives have we short-changed His power? Where are we struggling to believe in it?

God has given us the signals. He has sent His Son and promised victory. The story has already been written – we are simply being used to put words on the pages. This is an amazing thought. Oftentimes, we don’t see God in the small things because we don’t expect to. Being alerted and reminded of His truth gives us a rock solid foundation of faith. Like a bugle that blasts forth, jolting us in the silence of night, the Lord’s truth pricks the human heart. It both warms us and warns us.

We have been alerted! We have been saved and redeemed as His people! His hand is over every detail of our lives. Let us not hide our heads in the sand and grow complacent to His ever-present character. Let us run the race with expectation knowing that He walks among us.