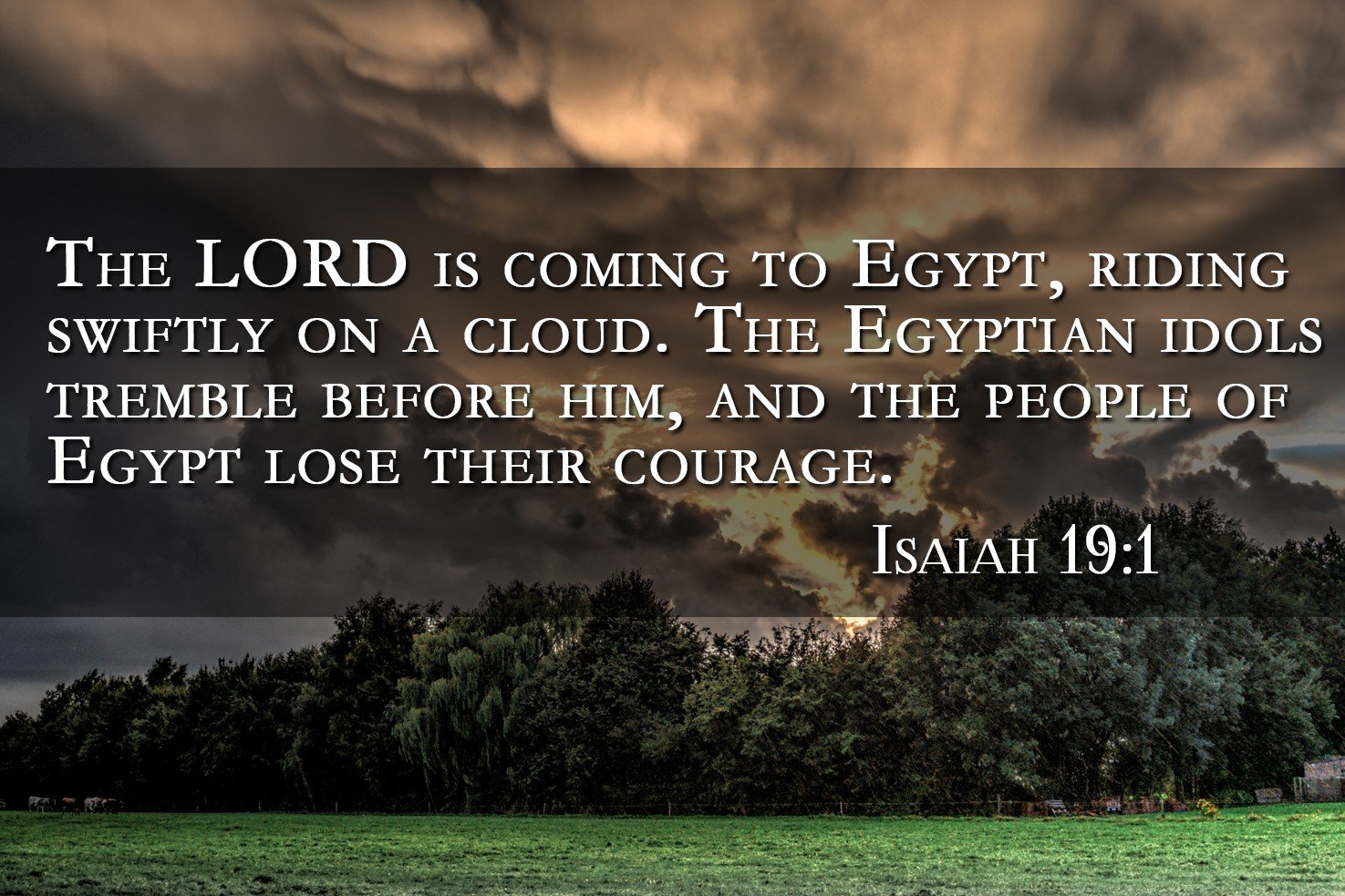 Behold, the LORD is riding on a swift cloud
and comes to Egypt;
and the idols of Egypt will tremble at his presence,
and the heart of the Egyptians will melt within them.
And I will stir up Egyptians against Egyptians,
and they will fight, each against another
and each against his neighbor,
city against city, kingdom against kingdom;
and the spirit of the Egyptians within them will be emptied out,
and I will confound their counsel;
and they will inquire of the idols and the sorcerers,
and the mediums and the necromancers;
and I will give over the Egyptians
into the hand of a hard master,
and a fierce king will rule over them,
declares the Lord GOD of hosts.
And the waters of the sea will be dried up,
and the river will be dry and parched,
and its canals will become foul,
and the branches of Egypt’s Nile will diminish and dry up,
reeds and rushes will rot away.
There will be bare places by the Nile,
on the brink of the Nile,
and all that is sown by the Nile will be parched,
will be driven away, and will be no more.
The fishermen will mourn and lament,
all who cast a hook in the Nile;
and they will languish
who spread nets on the water.
The workers in combed flax will be in despair,
and the weavers of white cotton.
Those who are the pillars of the land will be crushed,
and all who work for pay will be grieved.
The princes of Zoan are utterly foolish;
the wisest counselors of Pharaoh give stupid counsel.
How can you say to Pharaoh,
“I am a son of the wise,
a son of ancient kings”?
Where then are your wise men?
Let them tell you
that they might know what the LORD of hosts has purposed against Egypt.
The princes of Zoan have become fools,
and the princes of Memphis are deluded;
those who are the cornerstones of her tribes
have made Egypt stagger.
The LORD has mingled within her a spirit of confusion,
and they will make Egypt stagger in all its deeds,
as a drunken man staggers in his vomit.
And there will be nothing for Egypt
that head or tail, palm branch or reed, may do.

In that day there will be five cities in the land of Egypt that speak the language of Canaan and swear allegiance to the LORD of hosts. One of these will be called the City of Destruction.

In that day there will be an altar to the LORD in the midst of the land of Egypt, and a pillar to the LORD at its border. It will be a sign and a witness to the LORD of hosts in the land of Egypt. When they cry to the LORD because of oppressors, he will send them a savior and defender, and deliver them. And the LORD will make himself known to the Egyptians, and the Egyptians will know the LORD in that day and worship with sacrifice and offering, and they will make vows to the LORD and perform them. And the LORD will strike Egypt, striking and healing, and they will return to the LORD, and he will listen to their pleas for mercy and heal them.

In that day there will be a highway from Egypt to Assyria, and Assyria will come into Egypt, and Egypt into Assyria, and the Egyptians will worship with the Assyrians.

In that day Israel will be the third with Egypt and Assyria, a blessing in the midst of the earth, whom the LORD of hosts has blessed, saying, “Blessed be Egypt my people, and Assyria the work of my hands, and Israel my inheritance.”

It’s strange how sometimes we get the mindset that some people are unreachable.  Let’s be honest, many times we have those thoughts.  We believe they are so ‘far gone’ in their own thinking or worldly outlook it just seems like a lost cause to consider they would ever turn.  Thanks be to God He does not depend upon our own limited thinking with such matters.  For Jesus’ desire that all will come to knowledge and faith in Him; even the vilest offender.  There are no hopeless causes when it comes to the grace of Jesus and His burning desire.  None.

Egypt was one of the great political powers in the ancient world.  Strangely it was a nation that held a back and forth with Israel’s thinking.  It was where for 400 years they had been enslaved.  It was a nation the Israelites hated.  It also was a location where from time to time refuge was sought within their borders.  Due to their strength and the horrific past strong arming the Israelites, remarkably, Judah was considering an alliance with them to overthrow Assyria.  Talk about a schizophrenic relationship.

God had choice words concerning these things.  He would oversee civil war ravaging this one time strong nation of Egypt. He would destroy all their earthly wisdom.  He would allow their entire economy to collapse.  They would embrace foolish counsel.  His judgment would bring these things causing sheer terror among the people.

And remarkably, according to this prophecy, Egypt would turn to God.  Whatever judgment God had against this nation and allowed, His ultimate desire is that all people repent and turn to Him.  Egypt is no exception.  Neither are those unreachable lost causes.  Jesus has a plan.  His desire none would perish is on His heart continually.

Change our heart God to see people as you see them!

What do we use to replace God in our lives? It’s really a thought-provoking question. The temptation is to brush it aside, or minimize it. But when given proper thought, and approached with humility, we will most likely find an idol that we don’t want to address.

Though Israel had been enslaved by Egypt years before, they were tempted to seek refuge there, as the Assyrians continued to grow into an unstoppable force. Israel feared Assyria more than Egypt, so they wanted to compromise – even if it meant siding with the dreaded Egyptians. It’s silly when you think about it. The temptation was to put their trust in the lesser of two evils. The real question is – does God put us in situations where we have to choose between evil and evil?

I have thought about this before when choosing between political candidates. Do I have to choose the lesser of two evils? Maybe you have thought the same thing? I have also been in situations of temptation and emotional pain where it seems that choosing a lesser evil is the best way to cope. We know what God’s Word says, but we fear the uncertain… so we settle for the immediate.

God reminds Israel that Egypt is in the palm of His hand. There is nothing that will come to pass that isn’t filtered through this fingers. To answer my own questions above, I don’t believe God makes us choose between evil and evil. Through faith, we can always choose what brings glory to God. The reason for this is because the Bible consistently presents a moral ethic with which to live our lives. For the early Christians, that decision meant death. For us today, it may mean death of our flesh.

Killing our sinful ways is tough business, but if we have the power that raised Christ from the dead, we are empowered to choose His way instead of what makes sense to the world. Common sense, logic, and popularity all pale in comparison to faith in God.