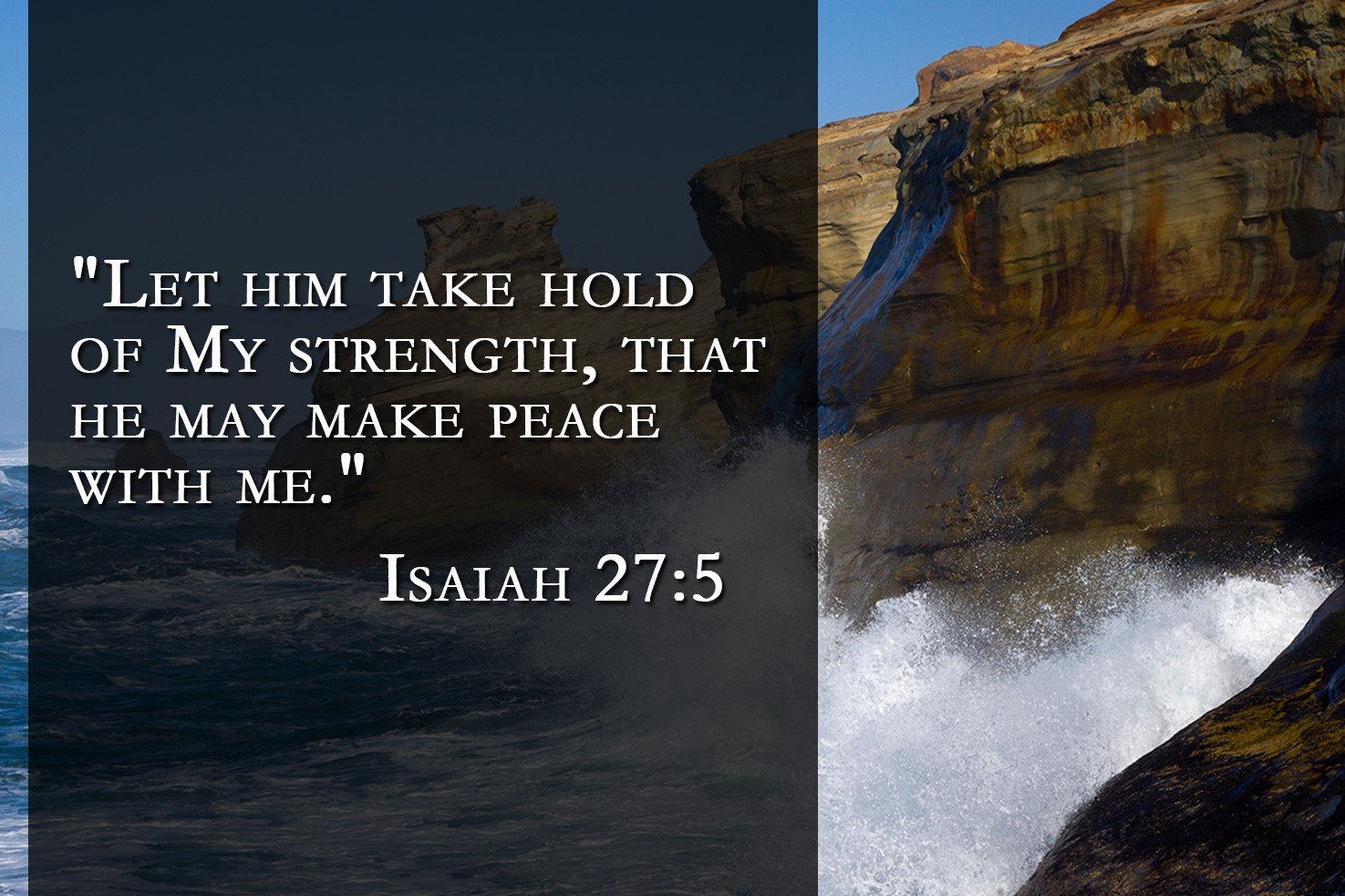 The Redemption of Israel

In that day,
“A pleasant vineyard, sing of it!
I, the LORD, am its keeper;
every moment I water it.
Lest anyone punish it,
I keep it night and day;
I have no wrath.
Would that I had thorns and briers to battle!
I would march against them,
I would burn them up together.
Or let them lay hold of my protection,
let them make peace with me,
let them make peace with me.”
In days to come Jacob shall take root,
Israel shall blossom and put forth shoots
and fill the whole world with fruit.
Has he struck them as he struck those who struck them?
Or have they been slain as their slayers were slain?
Measure by measure, by exile you contended with them;
he removed them with his fierce breath in the day of the east wind.
Therefore by this the guilt of Jacob will be atoned for,
and this will be the full fruit of the removal of his sin:
when he makes all the stones of the altars
like chalkstones crushed to pieces,
no Asherim or incense altars will remain standing.
For the fortified city is solitary,
a habitation deserted and forsaken, like the wilderness;
there the calf grazes;
there it lies down and strips its branches.
When its boughs are dry, they are broken;
women come and make a fire of them.
For this is a people without discernment;
therefore he who made them will not have compassion on them;
he who formed them will show them no favor.

This King James translation is awesome!

Chapter 27 speaks toward the end of evilness in the world.  It most certainly gives a strong hope that indeed there will be a time when evil is no longer.  It also gives significant warning.  But there is tremendous encouragement to be found.

The promise of the vineyard mentioned in chapter 5 will be restored.  It is God who will tend and work this vineyard.  He lovingly protects it.  He waters it.  He keeps guard day and night against the enemy. And the enemy will be forced to make peace with Him and His vineyard.  The fruit will be bountiful.  Oh, what a beautiful picture!

Here’s the deal.  This victory of King Jesus is coming.  It is obviously what we long for.  It is what we rest in.  But until that time, we are all called to be strong.  We are called to be dialed into Him and serve Him with heart, mind, soul, and strength.  But, and it’s a big but, we cannot do any of this in our own strength.  Our own strength is truly weakness compared to the unwavering strength of God.

Commentator Poole states that taking hold of God’s strength is much like Jacob wrestling with God that night.  This is something he never would have been able to do in his own strength but in the strength God actually gave to him in that moment.  The wrestling match, if you recall, ending in Jacob’s hip being touched and walking away with a limp.  But he also walked away with a blessing.  The order of his future was changed as well as his name.

Where do you need to take hold of God’s strength?  That is the question.  What situation is completely overwhelming you at the moment and in your own thought and strength are floundering?  The reality is in time Jesus will return.  He will take hold of all things and reign.  But people, He reigns right now as well.  And until that day comes, we must pursue His strength to endure what all we are struggling with.

Take hold of His strength and find peace.

This chapter, as a whole, is about the destruction of Israel’s enemies. The smaller story line, however, is the enemy within. For Israel, they would not experience the punishment of the enemies around them, as verse 7 indicates. But, they would endure refinement through struggle. They were going to experience a tough love by being taken into captivity. A remnant would remain.

I have been wrestling with a similar idea now for several weeks. What are walls we’ve built around our heart that are preventing spiritual growth? A slightly more frightening question is, what is it going to take to break down those walls? As Mona Jean Workman told me just a few weeks ago, “We build those walls brick by brick, and He takes them down brick by brick.” Sometimes those walls are huge, and God takes His time. In other instances, the wall comes crashing down.

Either way, we are forced to face the truth that He loves us and will do anything to grow us. Anything. Many of us have barriers right now that we don’t even know about – myself included. It’s easy to hide behind those walls, never repent, never truly love, and serve yourself. But Jesus calls us deeper.

Here in chapter 27, I am reminded that God had to work an inside job. Yes, there were the enemies of Israel that would be eradicated just like this world and Satan himself will be one day. But there is also the foolish human heart that continually led Israel back to their idols. The good news is, God does not send us into exile. He has provided a Savior. God has empowered us with the Holy Spirit, who works to bulldoze the fortified city we have built around our heart.

Where is God beginning to demolish your city? Where is He taking your walls down brick by brick? Most importantly, what is your response?