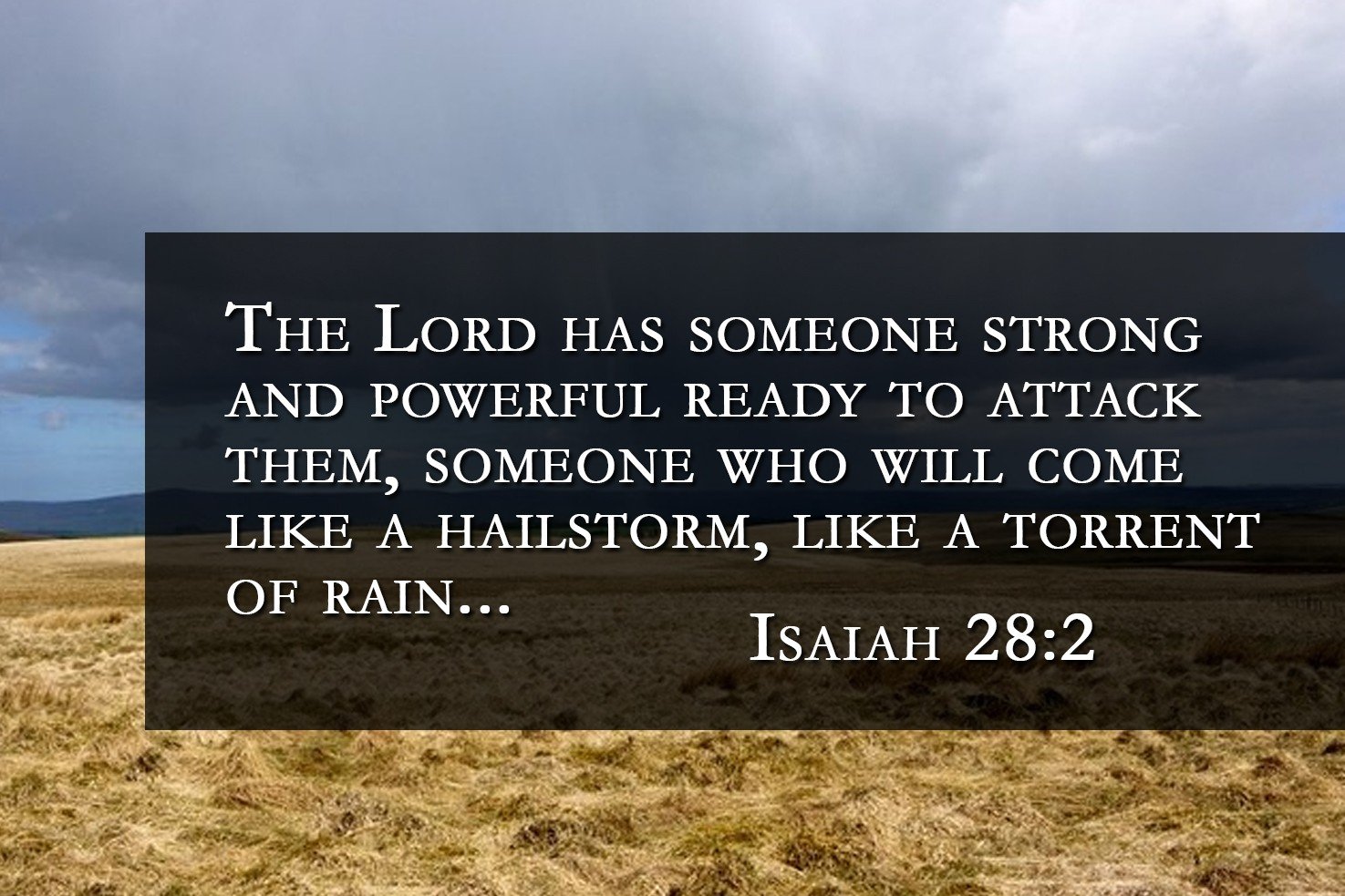 Judgment on Ephraim and Jerusalem

A Cornerstone in Zion

Therefore hear the word of the LORD, you scoffers,
who rule this people in Jerusalem!
Because you have said, “We have made a covenant with death,
and with Sheol we have an agreement,
when the overwhelming whip passes through
it will not come to us,
for we have made lies our refuge,
and in falsehood we have taken shelter”;
therefore thus says the Lord GOD,
“Behold, I am the one who has laid as a foundation in Zion,
a stone, a tested stone,
a precious cornerstone, of a sure foundation:
‘Whoever believes will not be in haste.’
And I will make justice the line,
and righteousness the plumb line;
and hail will sweep away the refuge of lies,
and waters will overwhelm the shelter.”
Then your covenant with death will be annulled,
and your agreement with Sheol will not stand;
when the overwhelming scourge passes through,
you will be beaten down by it.
As often as it passes through it will take you;
for morning by morning it will pass through,
by day and by night;
and it will be sheer terror to understand the message.
For the bed is too short to stretch oneself on,
and the covering too narrow to wrap oneself in.
For the LORD will rise up as on Mount Perazim;
as in the Valley of Gibeon he will be roused;
to do his deed—strange is his deed!
and to work his work—alien is his work!
Now therefore do not scoff,
lest your bonds be made strong;
for I have heard a decree of destruction
from the Lord GOD of hosts against the whole land.
Give ear, and hear my voice;
give attention, and hear my speech.
Does he who plows for sowing plow continually?
Does he continually open and harrow his ground?
When he has leveled its surface,
does he not scatter dill, sow cumin,
and put in wheat in rows
and barley in its proper place,
and emmer as the border?
For he is rightly instructed;
his God teaches him.
Dill is not threshed with a threshing sledge,
nor is a cart wheel rolled over cumin,
but dill is beaten out with a stick,
and cumin with a rod.
Does one crush grain for bread?
No, he does not thresh it forever;
when he drives his cart wheel over it
with his horses, he does not crush it.
This also comes from the LORD of hosts;
he is wonderful in counsel
and excellent in wisdom.

Remember those days back in elementary school when a teacher would correct you?  You had done something wrong, had acted out or whatever would warrant their response and they spoke strongly to you?  Possibly it felt like they were talking down to you.  Maybe being called out in front of the others felt humiliating.   Usually teachers have the best goal in mind with any correction.  They wanted to see you learn.  They desire to see you succeed.  Correction is a necessity for learning.

So, Isaiah speaks strongly to the people of Ephraim.  Now Ephraim represents the northern kingdom of Israel.  After Solomon’s reign, Israel split in two.  In time, the northern kingdom’s attitude was they wanted nothing to do with their brothers in the south, specifically Jerusalem.  As the temple was located there, these leaders of the north set up their own idol-worshiping temples.  They did everything possible so their people would not travel to Jerusalem.  Consequently the leadership led the people of the north into idol worship.

The Lord spoke to Isaiah and he in turn warned the people of punishment if they did not repent.

What we read in verses 9-14 is their response.  They felt like a school child being reprimanded by a teacher.  And like a stubborn child, they dug in their heels.  They pushed back.  They said we don’t need someone else telling us what to do.

Obviously, the handwriting is on the wall.

For such an attitude, God would turn them over to their enemies the Assyrians.  They didn’t like him speaking to them like school children?  The school of hard-knocks was about to ensue through the Assyrians hands and they would pay dearly.

When the Holy Spirit begins speaking to us concerning things He’s not pleased with we must listen.  We must heed His warnings and follow through with whatever His words are prompting.  Like the people of the northern kingdom they were called to listen and change.  They were called to surrender to what God was asking.  Many times He asks the very same thing of us.  He’s not talking down to us like a teacher but has the best in mind for what plan God has for each of us.  Unfortunately, if we choose not to obey and listen, we may indeed experience our own hard-knock as He tries to get our attention.

Samaria is given a strong warning by Isaiah to begin the chapter. The problem was self-indulgence and a lack of true wisdom. He then turns to Judah in verse 7 and gives warning that they are following the same path as Samaria.

A lot of the passages center around abusing alcohol. In that time, priests were not allowed to drink any alcoholic drink before service at the tabernacle. According to many scholars, the priests were showing up drunk to the solemn religious functions. Again, the warning was directed at their lack of wisdom and self-control. Practically-speaking, they could not serve their duty in a responsible manner while being intoxicated.

They also failed to recognize the true prophets of God. Most likely, they wanted to listen to what tickled the ear. This obviously still occurs today. There are many aspects of God’s Word that we don’t necessarily like, but it’s truth and needs to be spoken.

The big takeaway is that the people did not respect God’s instruction or authority. They refused to listen. Since they would not listen, they would be corrected with “stammering speech in a foreign language.” They would “stumble backward to be broken, trapped, and captured.” The Assyrians were coming.