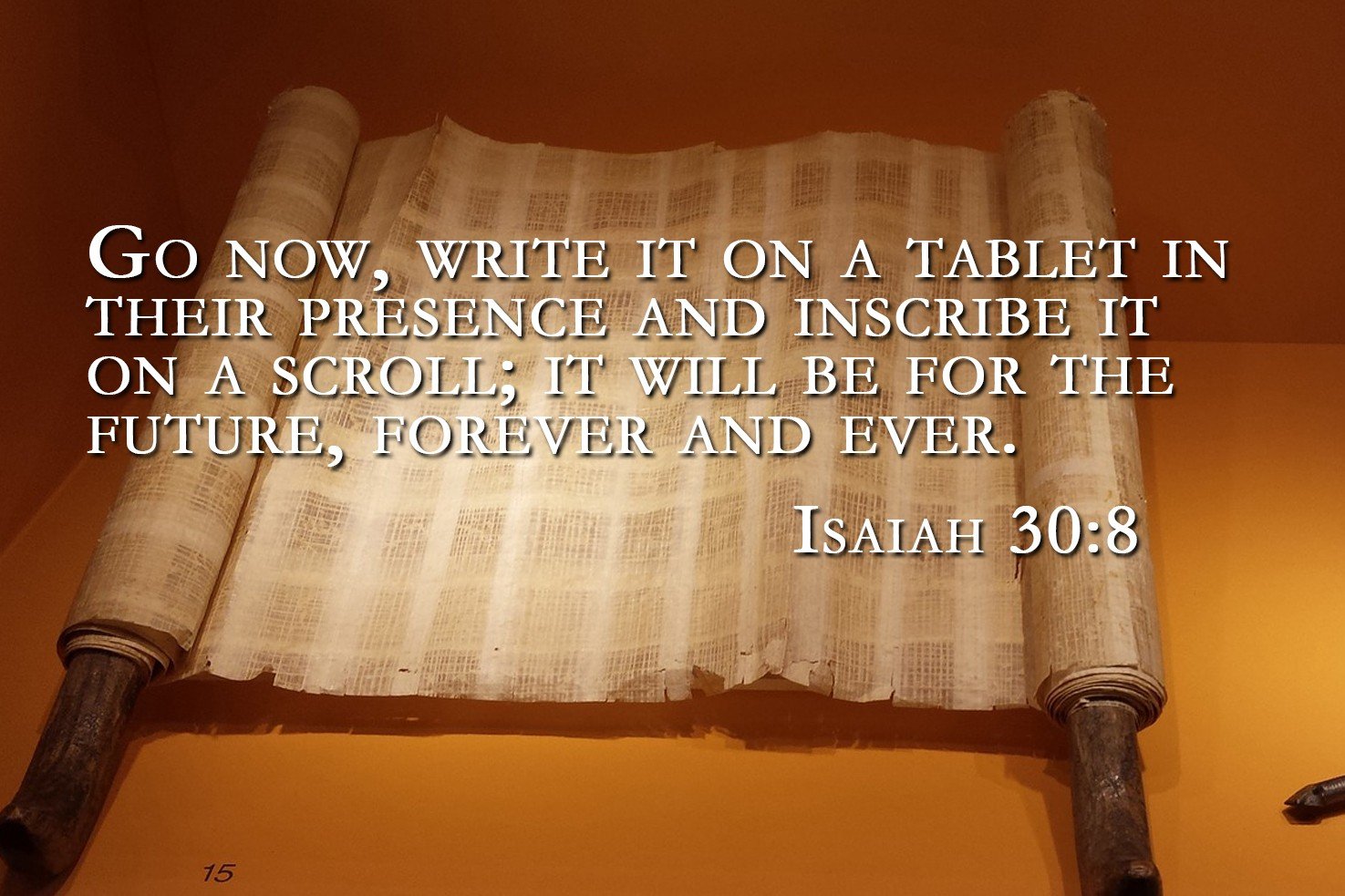 Do Not Go Down to Egypt

30   “Ah, stubborn children,” declares the LORD,
“who carry out a plan, but not mine,
and who make an alliance, but not of my Spirit,
that they may add sin to sin;
who set out to go down to Egypt,
without asking for my direction,
to take refuge in the protection of Pharaoh
and to seek shelter in the shadow of Egypt!
Therefore shall the protection of Pharaoh turn to your shame,
and the shelter in the shadow of Egypt to your humiliation.
For though his officials are at Zoan
and his envoys reach Hanes,
everyone comes to shame
through a people that cannot profit them,
that brings neither help nor profit,
but shame and disgrace.”

An oracle on the beasts of the Negeb.

Through a land of trouble and anguish,
from where come the lioness and the lion,
the adder and the flying fiery serpent,
they carry their riches on the backs of donkeys,
and their treasures on the humps of camels,
to a people that cannot profit them.
Egypt’s help is worthless and empty;
therefore I have called her
“Rahab who sits still.”

And now, go, write it before them on a tablet
and inscribe it in a book,
that it may be for the time to come
as a witness forever.
For they are a rebellious people,
lying children,
children unwilling to hear
the instruction of the LORD;
who say to the seers, “Do not see,”
and to the prophets, “Do not prophesy to us what is right;
speak to us smooth things,
prophesy illusions,
leave the way, turn aside from the path,
let us hear no more about the Holy One of Israel.”
Therefore thus says the Holy One of Israel,
“Because you despise this word
and trust in oppression and perverseness
and rely on them,
therefore this iniquity shall be to you
like a breach in a high wall, bulging out and about to collapse,
whose breaking comes suddenly, in an instant;
and its breaking is like that of a potter’s vessel
that is smashed so ruthlessly
that among its fragments not a shard is found
with which to take fire from the hearth,
or to dip up water out of the cistern.”
For thus said the Lord GOD, the Holy One of Israel,
“In returning and rest you shall be saved;
in quietness and in trust shall be your strength.”
But you were unwilling, and you said,
“No! We will flee upon horses”;
therefore you shall flee away;
and, “We will ride upon swift steeds”;
therefore your pursuers shall be swift.
A thousand shall flee at the threat of one;
at the threat of five you shall flee,
till you are left
like a flagstaff on the top of a mountain,
like a signal on a hill.

The Lord Will Be Gracious

Therefore the LORD waits to be gracious to you,
and therefore he exalts himself to show mercy to you.
For the LORD is a God of justice;
blessed are all those who wait for him.

For a people shall dwell in Zion, in Jerusalem; you shall weep no more. He will surely be gracious to you at the sound of your cry. As soon as he hears it, he answers you. And though the Lord give you the bread of adversity and the water of affliction, yet your Teacher will not hide himself anymore, but your eyes shall see your Teacher. And your ears shall hear a word behind you, saying, “This is the way, walk in it,” when you turn to the right or when you turn to the left. Then you will defile your carved idols overlaid with silver and your gold-plated metal images. You will scatter them as unclean things. You will say to them, “Be gone!”

And he will give rain for the seed with which you sow the ground, and bread, the produce of the ground, which will be rich and plenteous. In that day your livestock will graze in large pastures, and the oxen and the donkeys that work the ground will eat seasoned fodder, which has been winnowed with shovel and fork. And on every lofty mountain and every high hill there will be brooks running with water, in the day of the great slaughter, when the towers fall. Moreover, the light of the moon will be as the light of the sun, and the light of the sun will be sevenfold, as the light of seven days, in the day when the LORD binds up the brokenness of his people, and heals the wounds inflicted by his blow.

Behold, the name of the LORD comes from afar,
burning with his anger, and in thick rising smoke;
his lips are full of fury,
and his tongue is like a devouring fire;
his breath is like an overflowing stream
that reaches up to the neck;
to sift the nations with the sieve of destruction,
and to place on the jaws of the peoples a bridle that leads astray.

You shall have a song as in the night when a holy feast is kept, and gladness of heart, as when one sets out to the sound of the flute to go to the mountain of the LORD, to the Rock of Israel. And the LORD will cause his majestic voice to be heard and the descending blow of his arm to be seen, in furious anger and a flame of devouring fire, with a cloudburst and storm and hailstones. The Assyrians will be terror-stricken at the voice of the LORD, when he strikes with his rod. And every stroke of the appointed staff that the LORD lays on them will be to the sound of tambourines and lyres. Battling with brandished arm, he will fight with them. For a burning place has long been prepared; indeed, for the king it is made ready, its pyre made deep and wide, with fire and wood in abundance; the breath of the LORD, like a stream of sulfur, kindles it.

We are people who see a problem and resolve to fix it.  We’re often those who weigh in on some situation and in our own thinking come up with  what we believe is the best plan to solve the issue.  We see this over and over again in our lives in our relationships, our work, even political aspects.  There’s a break, a challenge on the horizon, even a behavior in others we recognize that is harmful.  We make plans and execute them to the best of our abilities.

This is fascinating as God has obviously wired us to be like this but also in a twist of irony, He wants us to rely on Him and not ourselves.

Judah had been obstinate in following God and now on the horizon sheer hardship was coming.  Their rebellion against Him had set the wheels in motion for His discipline.  As insane as it seems, they were considering and had even entered into negotiations with Egypt for an alliance.  Egypt.  The land that had made them slaves for 400 years.  Egypt whom they were set free from miraculously.  Egypt, a land filled filled with idols.

Driven by fear, they were turning to everyone but God for instruction.  They saw the problem and were acting hastily.  Hoping to find a way out of their troubles, oh their troubles were about to get much larger.

“In repentance and rest you will be saved.  in quietness and trust is your strength.”

God makes an offer to Judah – and yes to us.  Trusting God means returning to Him.  If there’s disobedience in our lives, the door is open but we must push through it to return to the ways He has for us.  Repentance has the idea of drawing close to Him.  But trusting Him also means we rest in Him. Resting is where we no longer strive to solve whatever issue we’re facing.  It is absolutely handing the reins over and yes, interceding and praying about our next move or act that is aligned with His will.  This is sheer trust.

These acts bring a quietness  to our spirit.  It’s a settling down of the our nerves and banishing the entire “what if” arguments we have with ourselves.  It’s the surrender again and again as we return, rest and trust.

How are you sleeping these days?  What have your thoughts been?  Are you experiencing a barrage of “what if” questions concerning a burden that has weighed you down?

The answer is to stop and return.  Return to God who is at work even though you may not see it.  Repent where you’ve taken things into your own hand.  More to the point, when we do this, He will fill us with an ability to trust Him.  He will give us guidance.  And yes, He will give us strength to follow through.

The people resisted God’s counsel, and instead, they received His judgement. It sounds harsh, but remember, we live under the New Covenant. There should be an aspect to this that is somewhat foreign since we are empowered with the Holy Spirit to be Jesus. These people did not have that, but they were still accountable to the way that God chose to speak to them. He communicated through true prophets like Isaiah, but the people didn’t want to hear it.

It’s easy to sit back and wonder why they had to experience such heartache. This is why God commanded Isaiah to record exactly how the people were responding to Him. It would serve as a warning to future generations in hopes that they would not fall to the same temptation. Again, there is an aspect that is foreign to us, but there is also an aspect we understand quite well. When our old sinful flesh rears its ugly head, we know we are just like these people.

During this time period, Israel was being attacked and would eventually be captured. Next on the list of the invading Assyrians would be the other nation of Judah. The events that led to this captivity are very clear. They were stubborn and deceptive. The people were intentionally disobedient. They rejected the true message and desired a word that allowed them to do what they wanted. Even those who thought they were crafty enough to escape on horses would be chased down.

The message is sobering, however, it’s also motivating. The same God who disciplines us is the same One who loved us enough to send Christ. That kind of grace just cannot be contained.