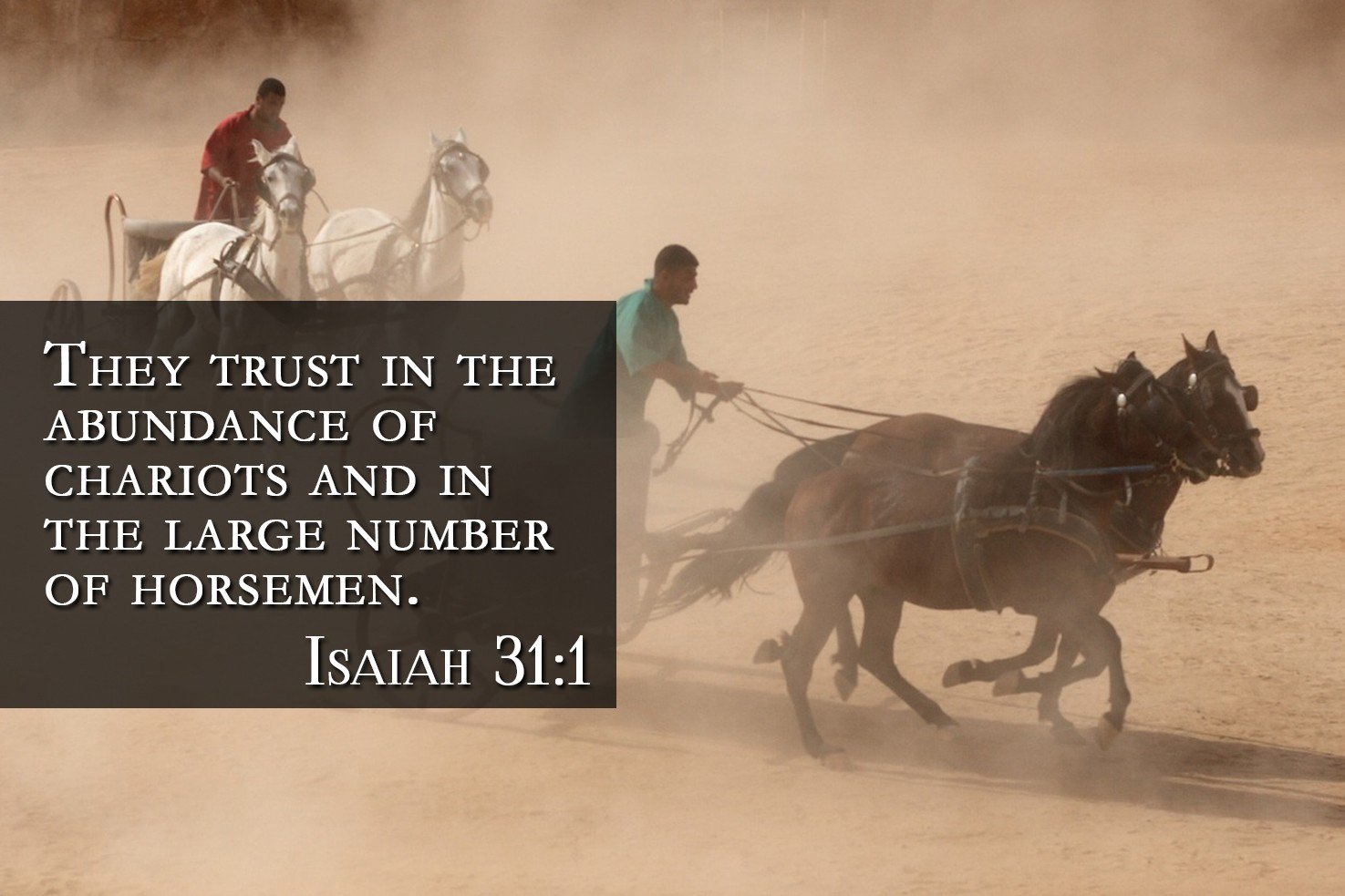 Woe to Those Who Go Down to Egypt

31   Woe to those who go down to Egypt for help
and rely on horses,
who trust in chariots because they are many
and in horsemen because they are very strong,
but do not look to the Holy One of Israel
or consult the LORD!
And yet he is wise and brings disaster;
he does not call back his words,
but will arise against the house of the evildoers
and against the helpers of those who work iniquity.
The Egyptians are man, and not God,
and their horses are flesh, and not spirit.
When the LORD stretches out his hand,
the helper will stumble, and he who is helped will fall,
and they will all perish together.
For thus the LORD said to me,
“As a lion or a young lion growls over his prey,
and when a band of shepherds is called out against him
he is not terrified by their shouting
or daunted at their noise,
so the LORD of hosts will come down
to fight on Mount Zion and on its hill.
Like birds hovering, so the LORD of hosts
will protect Jerusalem;
he will protect and deliver it;
he will spare and rescue it.”

Turn to him from whom people have deeply revolted, O children of Israel. For in that day everyone shall cast away his idols of silver and his idols of gold, which your hands have sinfully made for you.

“And the Assyrian shall fall by a sword, not of man;
and a sword, not of man, shall devour him;
and he shall flee from the sword,
and his young men shall be put to forced labor.
His rock shall pass away in terror,
and his officers desert the standard in panic,”
declares the LORD, whose fire is in Zion,
and whose furnace is in Jerusalem.

Where’s your trust?  No, I’m serious.  Stop and look at your life at the moment.  The areas that have spun completely out of control.  The relationships that have disintegrated.  The strife you sense with another.  The situation where there is by your own sight no resolution.  Or how ’bout this?  Stop and look at where God is calling you toward a deeper obedience on some issue and in your own reasoning it makes no sense.  Where is your trust?

When God called me to start The Warehouse it made no sense.  In fact, I was done with ministry at this point in my life.  But God had a different plan He slowly began revealing.  Following through with where God asked took an insane amount of trust.  During that journey I was stripped of many things from credentials to friendships to honestly, you name it.  But the calling of God burned so within all I could do was follow.  And this has been the makeup even of all our ministries today.

When God began calling us to feed the poor in our community with what would become The Forklift we had no building, no money, not even a pot or pan to our name.  But He called.  We followed in action and He provided.  The following year, God began speaking toward us feeding kids and expanding our feeding program to 5 nights.  The day I presented this to the congregation, we actually had a financial report before the presentation that we were operating in the red and money was almost down to nothing.  It’s funny, I remember wrestling with even if I should present it but went ahead.

The people rose up and said, “Yes!  We will feed the kids!  God will provide.”  And He did.  The dream of opening a men’s transitional housing for formerly the formerly incarcerated and those on the streets was one more time of such an action.  We had no money.  There was no building.  We had nothing.  God called and this dream incubated for a good 5 years before we began seeing the stirring of things.  Through a miraculous partnership and collaborative relationship, He provided in the strangest of ways and we opened the doors Spring 2017.

The people of Judah were looking toward the wrong things.  Still kicking around a political alliance with Egypt for military help – they were off point.  They were trusting in the chariots of man and the army of this potential ally over God himself.  They were looking at things with their own sight.  Here’s the other thing – and yes, it’s kind of ouchy.  They were more concerned with their own interests rather than God’s.

Many times our own interests is what completely blocks our obedience.

If we fail to follow through with whatever He’s asking we can miss an absolute provision and tremendous work of God.  If we choose to focus on the tangible aspect and all the roadblocks instead of moving forward and trusting Him, our failure is a hindrance to a greater work God wants to do in us.

So, I ask again – where is your trust?

God had willed captivity for His people. He also willed restoration. When we must go through a season of captivity in order to receive restoration, we tend to resist. We want to take the easy way out. In my experience as a Christian, the Lord’s way is rarely easy. I can recall many times in my spiritual journey when I’ve had to go through the valley of consequences in order to experience the mountaintop of grace. But even after those experiences, it still isn’t easy.

The people who fled to Egypt wanted an easy way out. What I find so intriguing about this chapter is that it’s mostly about the restoration of God’s people. God will eventually fight like a lion against Assyria. But for the time being, Assyria was coming to conquer, and the people wanted out. They thought if they could just get to Egypt, they could dodge the consequences they had earned through their own actions.

The most glaring and significant truth in this chapter is that God’s restoration comes to those who submit to His grace. Those who fled to Egypt did so in an attempt to save themselves. They really believed their future was better off in their own hands (or behind Egypt’s walls) than in God’s hands. The reality was, in order to really receive God’s redemption, they had to own up to their sin. They refused.

This is a problem today. When we don’t humbly own our sin (and pridefully try and save ourselves), we create a stumbling block for spiritual growth. We rob ourselves of grace as God intended and miss out on the powerful transformation that can come from seeking Him in our mess. Those fleeing to Egypt did not have an advocate! They didn’t have someone to make a path to God and His kingdom. We do! We have Jesus. So, in light of this, let us humbly come before Him instead of running to hide behind city walls.