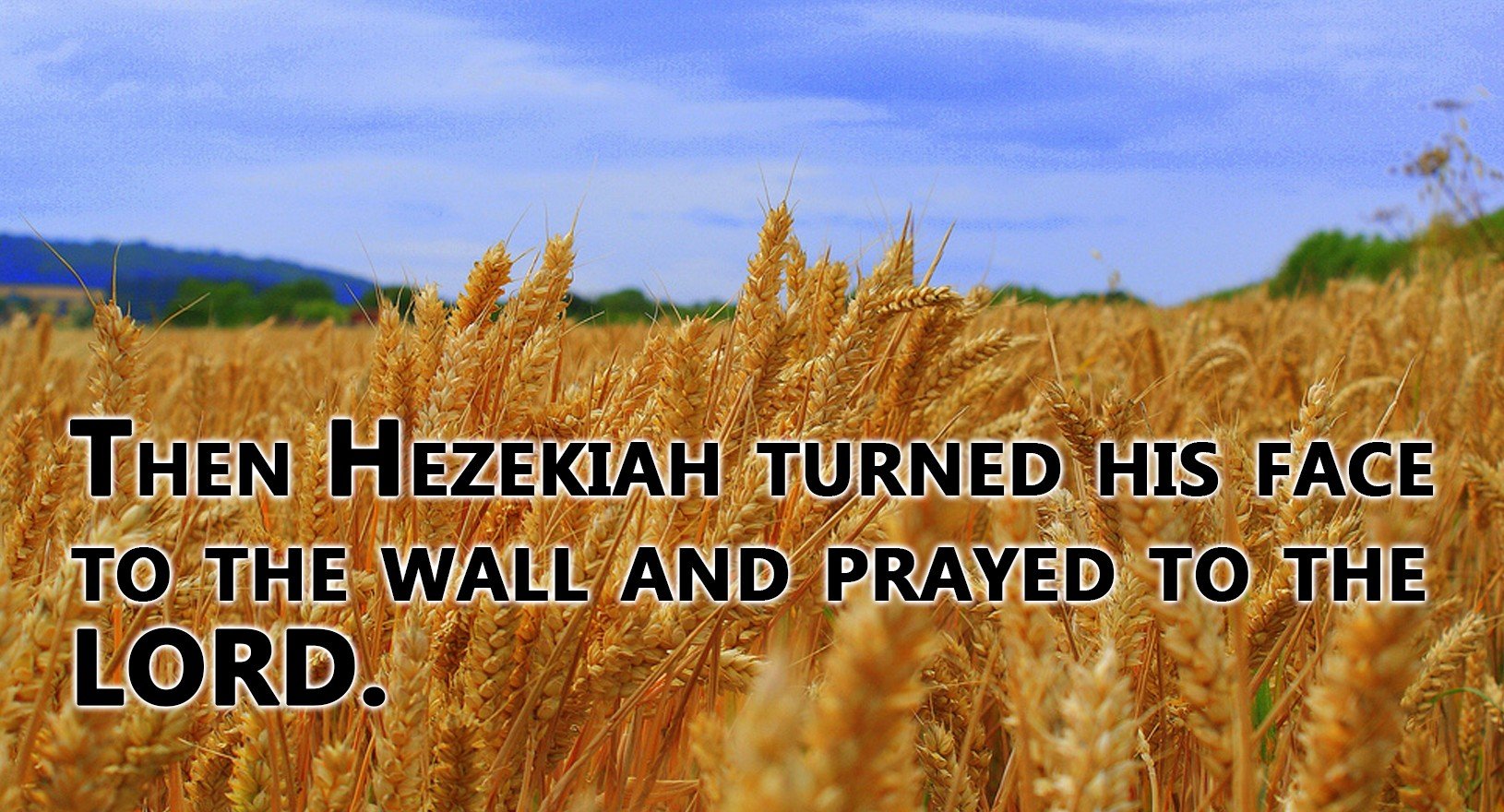 38 In those days Hezekiah became sick and was at the point of death. And Isaiah the prophet the son of Amoz came to him, and said to him, “Thus says the LORD: Set your house in order, for you shall die, you shall not recover.” Then Hezekiah turned his face to the wall and prayed to the LORD, and said, “Please, O LORD, remember how I have walked before you in faithfulness and with a whole heart, and have done what is good in your sight.” And Hezekiah wept bitterly.

Then the word of the LORD came to Isaiah: “Go and say to Hezekiah, Thus says the LORD, the God of David your father: I have heard your prayer; I have seen your tears. Behold, I will add fifteen years to your life. I will deliver you and this city out of the hand of the king of Assyria, and will defend this city.

“This shall be the sign to you from the LORD, that the LORD will do this thing that he has promised: Behold, I will make the shadow cast by the declining sun on the dial of Ahaz turn back ten steps.” So the sun turned back on the dial the ten steps by which it had declined.

A writing of Hezekiah king of Judah, after he had been sick and had recovered from his sickness:

I said, In the middle of my days
I must depart;
I am consigned to the gates of Sheol
for the rest of my years.
I said, I shall not see the LORD,
the LORD in the land of the living;
I shall look on man no more
among the inhabitants of the world.
My dwelling is plucked up and removed from me
like a shepherd’s tent;
like a weaver I have rolled up my life;
he cuts me off from the loom;
from day to night you bring me to an end;
I calmed myself until morning;
like a lion he breaks all my bones;
from day to night you bring me to an end.
Like a swallow or a crane I chirp;
I moan like a dove.
My eyes are weary with looking upward.
O Lord, I am oppressed; be my pledge of safety!
What shall I say? For he has spoken to me,
and he himself has done it.
I walk slowly all my years
because of the bitterness of my soul.
O Lord, by these things men live,
and in all these is the life of my spirit.
Oh restore me to health and make me live!
Behold, it was for my welfare
that I had great bitterness;
but in love you have delivered my life
from the pit of destruction,
for you have cast all my sins
behind your back.
For Sheol does not thank you;
death does not praise you;
those who go down to the pit do not hope
for your faithfulness.
The living, the living, he thanks you,
as I do this day;
the father makes known to the children
your faithfulness.
The LORD will save me,
and we will play my music on stringed instruments
all the days of our lives,
at the house of the LORD.

Now Isaiah had said, “Let them take a cake of figs and apply it to the boil, that he may recover.” Hezekiah also had said, “What is the sign that I shall go up to the house of the LORD?”

“Set your house in order.  You are going to die.”

The scene is dramatic.  Isaiah was instructed to relay an important message to King Hezekiah.  The illness he had would lead to death.  Devastated he turns his face toward the wall in depression.

There’s a running joke, well not really, among the guys in the office.  I state pretty freely I would like to be gone from this life by the age of 60.  I throw it in conversations from time to time because it’s a bit funny but also I’m actually serious.  The reality is I look forward to eternity.  There are many days I literally just want to go and be with Jesus.  Much of this life really has no draw for me.  So looking toward what’s beyond this life is on my thought quite a bit.

Consequently, I’ve never understood this story or other Believers who have grown so attached to this world.  I remember several years ago a lady in her 70’s who was diagnosed with cancer.  She had lived a full life.  When the diagnoses came she was absolutely devastated.  It was the end of her world.  Sadly the last months of her life was literally filled with depression and mourning.  I just didn’t get it.

The reality is at some point all of us will die.  When we become so attached to this life we make decisions that reflect such thinking.  As the old saying goes, “You can’t take it with you” is absolute truth.  All we’ve built our life upon is but dust.  At some point we will move on.  If this is all we hold onto, well we will make decisions based upon this life being it.

Such thinking affects our spending, our investment, our giving and so forth.  However, if we recognize and live toward the fact this life is not the end all be all and eternity awaits, this will change quite possibly how we look at those same things.  We will make choices that affect Kingdom matters.  We will give of our finances and investments toward the furthering of the Kingdom.  We can’t take it with us, but we can leave behind a legacy that affects generations to come.

Hezekiah was remarkably given another chance.  It’s an amazing story for certain.  We don’t have such assurance.  We have no idea of what even today brings.  Live like it’s your last.  Consider where your own attitude is about the things you hold so dearly.  What would change today if you were told, “Set your house in order”?

This is challenging and real.

Let’s review what’s happened thus far and what will happen in the future.

Assyria has built the strongest military the world has ever seen and has destroyed both Aram as well as Israel. Judah and Hezekiah are next on the list. Furthermore, Isaiah prophesied Judah’s punishment in captivity during the earlier chapters, so it would make sense that Assyria could be their captor.

In chapter 37, Hezekiah faces the onslaught of Assyria but strengthens himself on Isaiah’s words from the Lord and refuses to surrender. Hezekiah repents. In the middle of the night, an angel from God slays 185,000 from the Assyrian army. It was the night of Passover. The people of Judah went to sleep wondering how many hours they had left on Earth and woke up to find that the threat had been demolished.

We pick up here in Chapter 38 with Hezekiah praying for his health. The Lord hears him and grants him 15 additional years to his life. When you look at everything that has transpired, it’s easy to see why the people of Judah speculated that Hezekiah might have been the Messiah. This is especially true considering they were looking for a military leader to free them from their enemies. Although he was a great leader, most of this chapter is dedicated to illustrating his mortality. Hezekiah was a faithful man for most of his life, but he was still human – as we will see in the next chapter.

So, the real question is, when will Judah be taken captive? We know God delivered from Assyria but did not deliver from Babylon. What will happen with Hezekiah in his remaining years? Will Judah turn back to God or continue in rebellion? I think in the coming chapters we will see some interesting twists and turns.