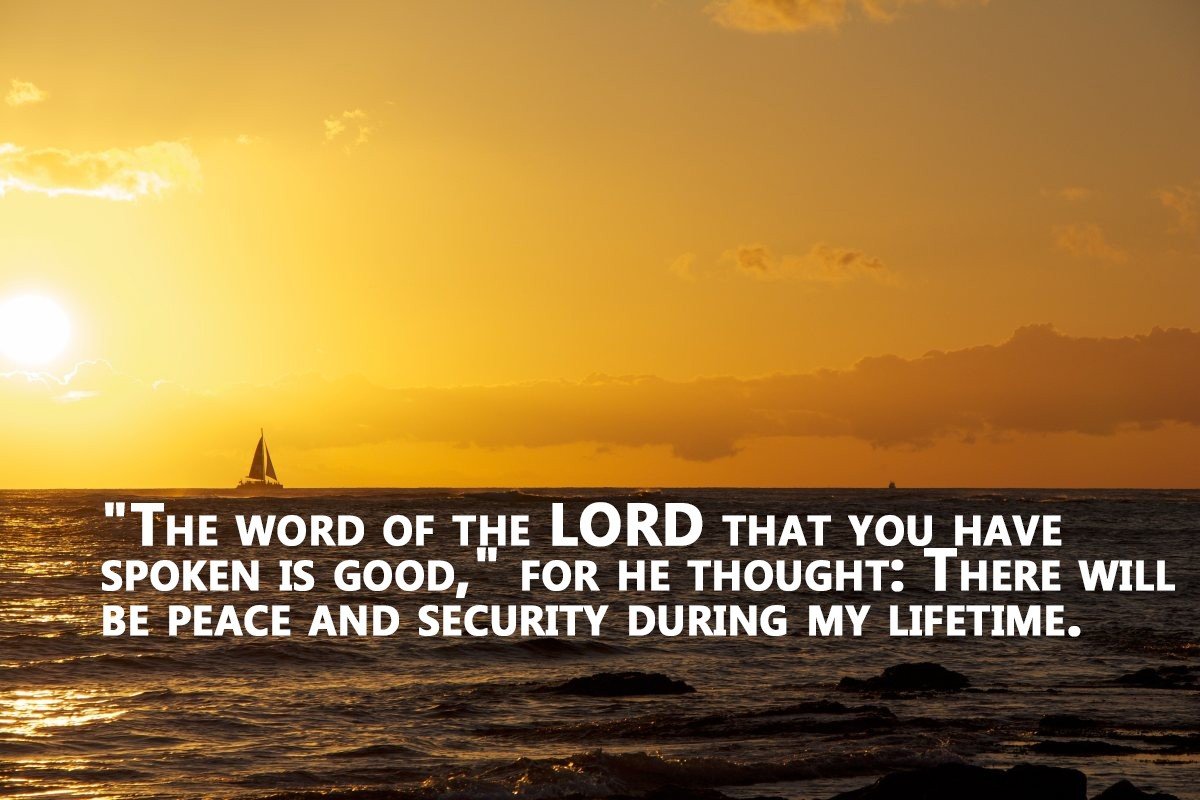 39 At that time Merodach-baladan the son of Baladan, king of Babylon, sent envoys with letters and a present to Hezekiah, for he heard that he had been sick and had recovered. And Hezekiah welcomed them gladly. And he showed them his treasure house, the silver, the gold, the spices, the precious oil, his whole armory, all that was found in his storehouses. There was nothing in his house or in all his realm that Hezekiah did not show them. Then Isaiah the prophet came to King Hezekiah, and said to him, “What did these men say? And from where did they come to you?” Hezekiah said, “They have come to me from a far country, from Babylon.” He said, “What have they seen in your house?” Hezekiah answered, “They have seen all that is in my house. There is nothing in my storehouses that I did not show them.”

Then Isaiah said to Hezekiah, “Hear the word of the LORD of hosts: Behold, the days are coming, when all that is in your house, and that which your fathers have stored up till this day, shall be carried to Babylon. Nothing shall be left, says the LORD. And some of your own sons, who will come from you, whom you will father, shall be taken away, and they shall be eunuchs in the palace of the king of Babylon.” Then Hezekiah said to Isaiah, “The word of the LORD that you have spoken is good.” For he thought, “There will be peace and security in my days.”

Just because we are Believers does not mean we will not make foolish decisions sometimes.  It’s an unfortunate thing for sure when this takes place, but sometimes we can get so caught up in whatever is going on or even our own desires we make decisions that are not wise that have lasting consequences.

The case in point is Hezekiah.  After being given an extended life, when envoys from Babylon came calling he foolishly decided to show the wealth of the kingdom.  It’s hard to fathom what he was thinking when he did this.  Possibly it was simply the attention he received from such a move of another kingdom bringing gifts and showing concern of his illness.  Maybe it was his ego being stroked by the sympathy they gave.  Possibly it was his pride in revealing the riches of the kingdom.  It’s unsure.  But what is certain, Isaiah speaks this was a foolish thing to do for one day Babylon would come and take all of what he had shown away.

Hezekiah’s response to Isaiah was also foolish.  He was shortsighted.  He was grateful whatever would come would not affect him personally in his lifetime.  A bit selfish, if you ask me.

Foolishness is something that can get in the way on many of our decisions and behavior.  Although we as Followers of Jesus have been given grace and mercy, there is still a calling for each of us to use wisdom and discernment.  I am simply reminded of the fact that everything we say, all we do, the plans we make must be sought before God to ensure we are acting and responding wisely.

You know, there is nothing that requires immediate attention.  Nothing. Even in the middle of a presented option or choice, we need to get into the habit of praying even right there and then for the choice we make to be what He wants.

Pursue such conversations with Jesus.  Seek out the peace of the Holy Spirit, which only He can give, when there is a decision to be made.  Develop a relationship with God that is continually seeking answers and guidance for even the smallest things.  For what may appear to be very small could have major consequences if we’ve not sought His counsel first.

The last verse of Chapter 39 is probably the most heavily scrutinized statement from Hezekiah. Many scholars are split on the correct interpretation of this verse. Surprising to me, most tend to agree that it should be read as a positive statement. Let’s review his words so we can analyze the context.

After the boneheaded decision to show off his treasure to Babylon’s prince, Isaiah has strong words for Hezekiah.

‘The time will certainly come when everything in your palace and all that your fathers have stored up until this day will be carried off to Babylon; nothing will be left,’ says the LORD.

To which Hezekiah responds with…

Then Hezekiah said to Isaiah, “The word of the LORD that you have spoken is good,” for he thought: There will be peace and security during my lifetime.

His response is somewhat baffling. Was he actually joyful in accepting the Lord’s rebuke, or was he just trying to sound holy? The fact that he includes “in my lifetime” to the end of his statement makes you wonder if he even cared about the future of Judah. It sounds like he doesn’t care if his descendants are ruined, as long as he is able to live the rest of his life in peace. However, as stated previously, this is the minority view.

So, here is the bad news. Even though many see Hezekiah’s words in positive light, I would tend to agree with Hank. I just can’t reconcile this as a positive statement, especially because Hezekiah’s response to his own suffering was much different. His attitude at the end of this chapter is selfish and weak.

Thankfully, there is good news. Hezekiah was not the Messiah. Judah was not dependent upon his perfect leadership. He proved himself human, just like the rest of us. Judah’s hope remained in the Lord alone, and He is the One to be trusted.