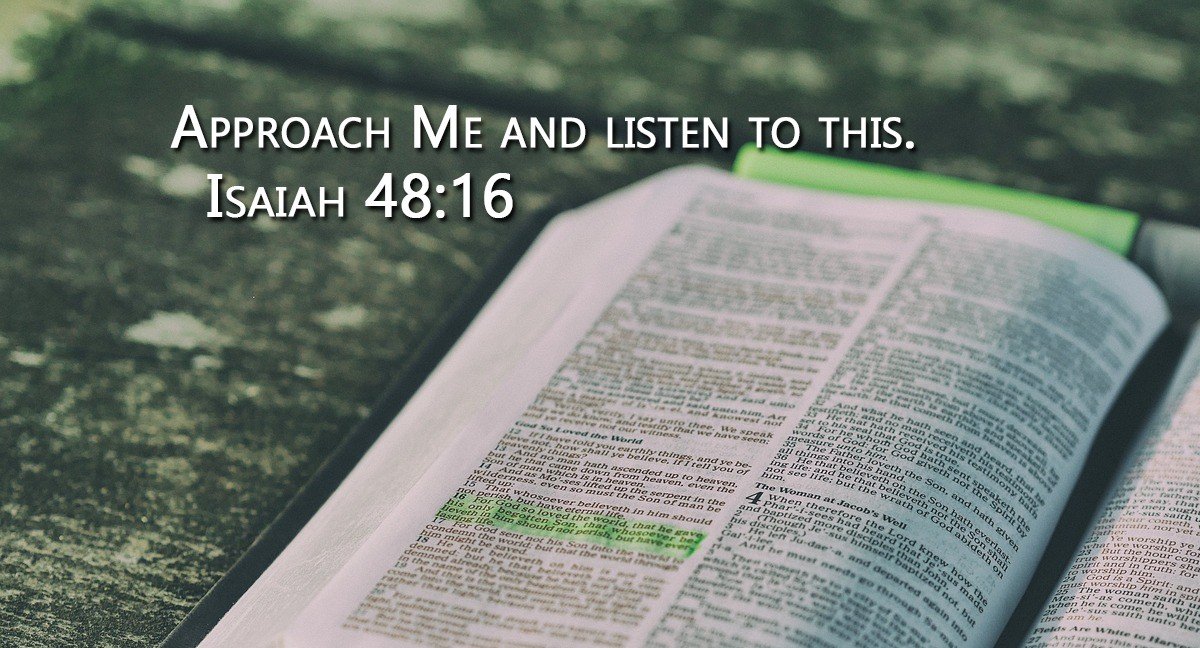 48   Hear this, O house of Jacob,
who are called by the name of Israel,
and who came from the waters of Judah,
who swear by the name of the LORD
and confess the God of Israel,
but not in truth or right.
For they call themselves after the holy city,
and stay themselves on the God of Israel;
the LORD of hosts is his name.
“The former things I declared of old;
they went out from my mouth, and I announced them;
then suddenly I did them, and they came to pass.
Because I know that you are obstinate,
and your neck is an iron sinew
and your forehead brass,
I declared them to you from of old,
before they came to pass I announced them to you,
lest you should say, ‘My idol did them,
my carved image and my metal image commanded them.’
“You have heard; now see all this;
and will you not declare it?
From this time forth I announce to you new things,
hidden things that you have not known.
They are created now, not long ago;
before today you have never heard of them,
lest you should say, ‘Behold, I knew them.’
You have never heard, you have never known,
from of old your ear has not been opened.
For I knew that you would surely deal treacherously,
and that from before birth you were called a rebel.
“For my name’s sake I defer my anger;
for the sake of my praise I restrain it for you,
that I may not cut you off.
Behold, I have refined you, but not as silver;
I have tried you in the furnace of affliction.
For my own sake, for my own sake, I do it,
for how should my name be profaned?
My glory I will not give to another.

The Lord’s Call to Israel

“Listen to me, O Jacob,
and Israel, whom I called!
I am he; I am the first,
and I am the last.
My hand laid the foundation of the earth,
and my right hand spread out the heavens;
when I call to them,
they stand forth together.
“Assemble, all of you, and listen!
Who among them has declared these things?
The LORD loves him;
he shall perform his purpose on Babylon,
and his arm shall be against the Chaldeans.
I, even I, have spoken and called him;
I have brought him, and he will prosper in his way.
Draw near to me, hear this:
from the beginning I have not spoken in secret,
from the time it came to be I have been there.”
And now the Lord GOD has sent me, and his Spirit.
Thus says the LORD,
your Redeemer, the Holy One of Israel:
“I am the LORD your God,
who teaches you to profit,
who leads you in the way you should go.
Oh that you had paid attention to my commandments!
Then your peace would have been like a river,
and your righteousness like the waves of the sea;
your offspring would have been like the sand,
and your descendants like its grains;
their name would never be cut off
or destroyed from before me.”
Go out from Babylon, flee from Chaldea,
declare this with a shout of joy, proclaim it,
send it out to the end of the earth;
say, “The LORD has redeemed his servant Jacob!”
They did not thirst when he led them through the deserts;
he made water flow for them from the rock;
he split the rock and the water gushed out.
“There is no peace,” says the LORD, “for the wicked.”

There is no masquerade with God.  He sees the hard hearts of people.  He sees where they have refused to bring themselves before Him in submission.  Not only this, He recognizes the issues that are affecting many decisions and lack of commitment or obedience.  He knows what is taking place within the deepest recesses of thought and areas of their heart where rebellion has set them against Him.

He sees and He acts.  It’s just never seems to be in the timing of what we as observers or those who are burden bearers would prefer Him to do so.

This stands out in verse 3.

“I declared the former things long ago and they went forth from My mouth, and I proclaimed them.  Suddenly I acted and they came to pass.”

God declared what would take place to Israel through their disobedience for hundreds of years.  It seemed like nothing though of what He said would happen did.  But when His timing on the matter of bringing Israel low, refining them in the fires of affliction they would endure, upon His sudden actions they came to pass.

There are times we look at situations and wonder, “How long?”  We question as to what it will take for Him to reach the lost, the wayward, the prodigals who are on their own agenda.  This is a reminder at least to myself of His timing being perfect in drawing the rebellious and hard-hearted people to Him.  He comes in power when He acts.  And when He acts it can be suddenly.

For us who are burdened on some matter may we be encouraged by this statement.  God is over all and sees all things.  He knows the heart of people and sees clearly what is taking place.  He will act when His timing is right.  His actions will appear sudden.  May we in the meantime continue to be led by the Spirit in our prayers for the lost.  May we trust Him to act in power in the lives of these who have set themselves against them.  Let us continue to pray toward the soil of their hearts being ready through the hardship that they will turn to Him.

We who know Christ understand that the Gospel message is not a one of mystery and mysticism. Yes, some may claim this because our God is a mysterious God, however, the sending of His Son could not have been more clear. To rebellious people like us, He sent His Son with power, authority, and a healing touch. Jesus came, not only with all this, but with a message. It was a message that was so powerful He gave His life for it.

Although the Gospel has many layers, it is simple and clear. It does not require hidden knowledge. It does not require rituals or magical revelation. God spoke as clearly and directly as He possibly could.  The author of Isaiah penned these words to us thousands of years ago.

Approach Me and listen to this. From the beginning I have not spoken in secret; from the time anything existed, I was there.” And now the Lord GOD has sent me and His Spirit.

God desires intimate involvement in human affairs. He asks us to approach Him and listen. In this way, His presence in our lives is easily verifiable to both Christians and non-Christians alike. He called us to His will, sent His Son with a message, and then sacrificed so that we could accomplish His will.

Read this point and let it sink in. When Jesus Christ came to Earth to set us free from our sin, it was not some shockingly new revelation that had been hidden for centuries. God spoke about Him since the beginning of creation. Jesus was the logical conclusion to all that God had been doing with Israel throughout their history. The reason we come near is because God is easily understood and what He says will come true. Period. It always has and always will.

Do you marvel at the fact that a God so far above us would seek to be involved so intimately in our lives? If you doubt this fact, then look at the cross. All we need to do is look to Jesus for the heart of God. Approach me and listen.