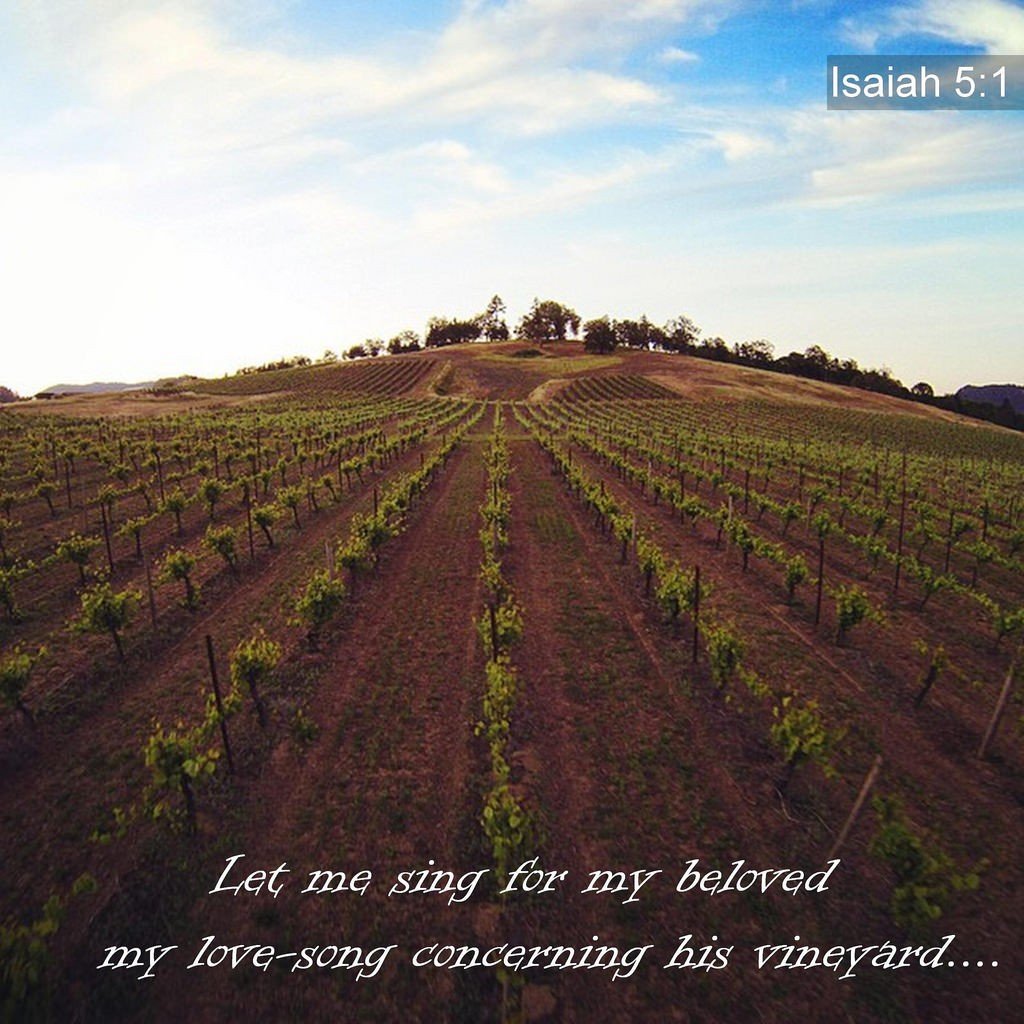 The Vineyard of the Lord Destroyed

5   Let me sing for my beloved
my love song concerning his vineyard:
My beloved had a vineyard
on a very fertile hill.
He dug it and cleared it of stones,
and planted it with choice vines;
he built a watchtower in the midst of it,
and hewed out a wine vat in it;
and he looked for it to yield grapes,
but it yielded wild grapes.
And now, O inhabitants of Jerusalem
and men of Judah,
judge between me and my vineyard.
What more was there to do for my vineyard,
that I have not done in it?
When I looked for it to yield grapes,
why did it yield wild grapes?
And now I will tell you
what I will do to my vineyard.
I will remove its hedge,
and it shall be devoured;
I will break down its wall,
and it shall be trampled down.
I will make it a waste;
it shall not be pruned or hoed,
and briers and thorns shall grow up;
I will also command the clouds
that they rain no rain upon it.
For the vineyard of the LORD of hosts
is the house of Israel,
and the men of Judah
are his pleasant planting;
and he looked for justice,
but behold, bloodshed;
for righteousness,
but behold, an outcry!

Woe to the Wicked

Woe to those who join house to house,
who add field to field,
until there is no more room,
and you are made to dwell alone
in the midst of the land.
The LORD of hosts has sworn in my hearing:
“Surely many houses shall be desolate,
large and beautiful houses, without inhabitant.
For ten acres of vineyard shall yield but one bath,
and a homer of seed shall yield but an ephah.”
Woe to those who rise early in the morning,
that they may run after strong drink,
who tarry late into the evening
as wine inflames them!
They have lyre and harp,
tambourine and flute and wine at their feasts,
but they do not regard the deeds of the LORD,
or see the work of his hands.
Therefore my people go into exile
for lack of knowledge;
their honored men go hungry,
and their multitude is parched with thirst.
Therefore Sheol has enlarged its appetite
and opened its mouth beyond measure,
and the nobility of Jerusalem and her multitude will go down,
her revelers and he who exults in her.
Man is humbled, and each one is brought low,
and the eyes of the haughty are brought low.
But the LORD of hosts is exalted in justice,
and the Holy God shows himself holy in righteousness.
Then shall the lambs graze as in their pasture,
and nomads shall eat among the ruins of the rich.
Woe to those who draw iniquity with cords of falsehood,
who draw sin as with cart ropes,
who say: “Let him be quick,
let him speed his work
that we may see it;
let the counsel of the Holy One of Israel draw near,
and let it come, that we may know it!”
Woe to those who call evil good
and good evil,
who put darkness for light
and light for darkness,
who put bitter for sweet
and sweet for bitter!
Woe to those who are wise in their own eyes,
and shrewd in their own sight!
Woe to those who are heroes at drinking wine,
and valiant men in mixing strong drink,
who acquit the guilty for a bribe,
and deprive the innocent of his right!
Therefore, as the tongue of fire devours the stubble,
and as dry grass sinks down in the flame,
so their root will be as rottenness,
and their blossom go up like dust;
for they have rejected the law of the LORD of hosts,
and have despised the word of the Holy One of Israel.
Therefore the anger of the LORD was kindled against his people,
and he stretched out his hand against them and struck them,
and the mountains quaked;
and their corpses were as refuse
in the midst of the streets.
For all this his anger has not turned away,
and his hand is stretched out still.
He will raise a signal for nations far away,
and whistle for them from the ends of the earth;
and behold, quickly, speedily they come!
None is weary, none stumbles,
none slumbers or sleeps,
not a waistband is loose,
not a sandal strap broken;
their arrows are sharp,
all their bows bent,
their horses’ hoofs seem like flint,
and their wheels like the whirlwind.
Their roaring is like a lion,
like young lions they roar;
they growl and seize their prey;
they carry it off, and none can rescue.
They will growl over it on that day,
like the growling of the sea.
And if one looks to the land,
behold, darkness and distress;
and the light is darkened by its clouds.

They say tending to a vineyard is tedious and time-consuming.  That stressful work is a top priority of vineyard owners. God uses this springboard of thought to His own desires for the people of Israel.  These thoughts bear witness to us as well.  As the owner He is diligently working and tending the fields and tending to the vines.  His nature is to lovingly do so again and again.  He expects fruit to bear. Instead as the words speak, what he found was bad fruit, wild grapes.

As one commentator writes, “We are dealing with something worse than unfruitfulness.”  The fruit produced may appear beautiful but are bitter, poisonous.  These deadly grapes are descriptive of false religion, strong-willed people who may look appealing at first sight but are dangerous.  Their fruit is not bringing any glory to the Vinedresser of God who tends so carefully to all.

God made a huge investment in Israel; consider all the time, energy, and work had no result.  I wonder how that resonates with us.  When we consider all God has done for us; how He continues to invest and lead and pour Himself into our lives, how much are we growing?  How much are we recognizing His tender work?  Or would He upon inspection find we were lacking and fruit that was worthy?

How are we receiving, embracing the work of God in us?

You see, the fault lies with us not God.  He has given us every opportunity to grow in Him.  The Lord tenderly works the soil of our hearts.  He sets up and protects us as His vine.  But it still comes down to choices.  Choices that can be literally life altering.

Literally a vineyard doesn’t ‘do’ anything.  But as God’s vineyard, there is an expectation to work with and in His grace.  This grace is given so unbelievably freely to us.  However, there is also an expectation to take this same grace and apply to our lives and the lives around us. This is part of the production of good fruit.

If Jesus were to look upon the fruit of your life right now, what would He see?  Furthermore, when he pulls back the branches to see what clusters of grapes are hidden beneath, are they good?

Six woes are given to the nation of Israel starting in verse 8. The woes include greed, debauchery, unbelief, perversion, arrogance, and injustice.

“To these sins are added prophecies of judgment: desolation, captivity or death for the pompous leaders, and humiliation for all. The conquering army is depicted in Isaiah 5:26-30.”

God had originally given the land to the Israelites so that they could have a place of their own to worship and glorify Him. By the time of Isaiah, the people had begun to exert their selfish desires by creating huge, wealthy estates. They took from the poor what was rightfully theirs. As a result, in verse 10, the Lord reduces their crop to a fraction of what it should have been. It would be similar to a famine.

For me, verse 19 may be the one that stings the most. The people’s unbelief has turned into mockery of the Lord. They mock God as well as His prophets and sarcastically ask Isaiah when God’s wrath will come down. It is not a good look.

The Lord will send an army to conquer this injustice. Assyria would conquer the northern kingdom and Babylon would eventually ransack Jerusalem. God doesn’t sacrifice on truth. He means what He says. His Word is accomplished in His timing. We can’t let ourselves slip into a passive state of selfish sin because the consequences will follow. We are here to glorify the King!