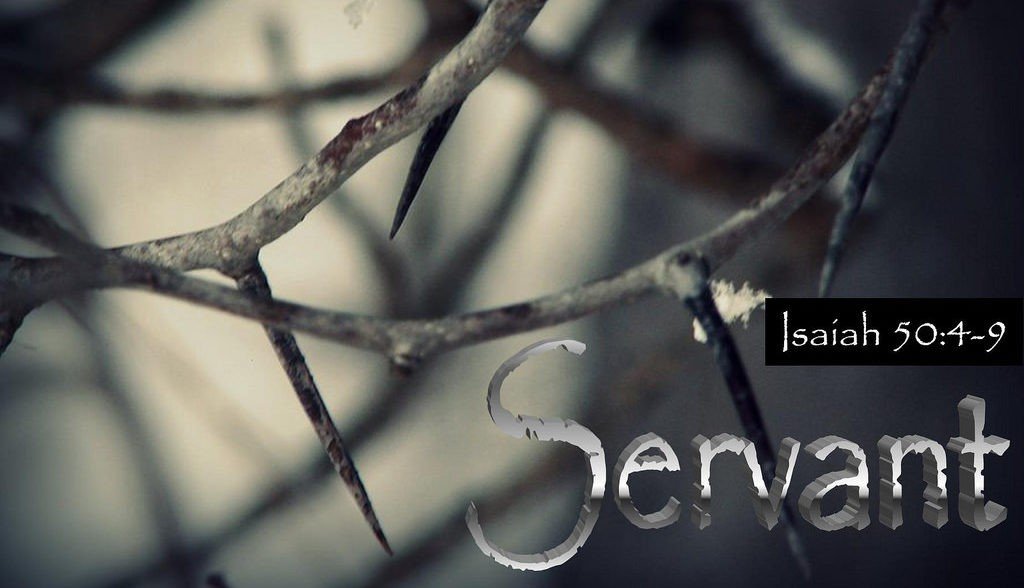 Israel’s Sin and the Servant’s Obedience

50   Thus says the LORD:
“Where is your mother’s certificate of divorce,
with which I sent her away?
Or which of my creditors is it
to whom I have sold you?
Behold, for your iniquities you were sold,
and for your transgressions your mother was sent away.
Why, when I came, was there no man;
why, when I called, was there no one to answer?
Is my hand shortened, that it cannot redeem?
Or have I no power to deliver?
Behold, by my rebuke I dry up the sea,
I make the rivers a desert;
their fish stink for lack of water
and die of thirst.
I clothe the heavens with blackness
and make sackcloth their covering.”
The Lord GOD has given me
the tongue of those who are taught,
that I may know how to sustain with a word
him who is weary.
Morning by morning he awakens;
he awakens my ear
to hear as those who are taught.
The Lord GOD has opened my ear,
and I was not rebellious;
I turned not backward.
I gave my back to those who strike,
and my cheeks to those who pull out the beard;
I hid not my face
from disgrace and spitting.
But the Lord GOD helps me;
therefore I have not been disgraced;
therefore I have set my face like a flint,
and I know that I shall not be put to shame.
He who vindicates me is near.
Who will contend with me?
Let us stand up together.
Who is my adversary?
Let him come near to me.
Behold, the Lord GOD helps me;
who will declare me guilty?
Behold, all of them will wear out like a garment;
the moth will eat them up.
Who among you fears the LORD
and obeys the voice of his servant?
Let him who walks in darkness
and has no light
trust in the name of the LORD
and rely on his God.
Behold, all you who kindle a fire,
who equip yourselves with burning torches!
Walk by the light of your fire,
and by the torches that you have kindled!
This you have from my hand:
you shall lie down in torment.

Imagery of a courageous person comes often times in scenes of battle.  We think of a warrior who is on the battlefield moving forward against the odds.  We think of a person who has been told news that failure will happen but they go on anyway.   There is the image of a person who with all reason sees the potential of defeat as every odd is stacked against them but they focus instead and move in victory with every step made.

So many times within scripture when God told His leaders to be strong and courageous these were the scenes that set up the statement.  God called them to believe in the impossible and believe in Him.  They were commissioned to step out in faith and boldly continue the path they were asked to walk.

Followers of Jesus Christ are called to be filled with courage and strength.  We are often placed in similar situations where every possible thing that could go wrong has.  We are in places where every attempt we’ve made to reconcile with another have fallen flat.  We are asked to go out with our faces like flint and continue the mission.

Such courage is riddled with hardship.  The one you love so deeply has no interest in Jesus.  The child you’ve labored over for years still plays and lives in the far country.  The health that you have worked desperately to see turn around is in the same place.

Such hardship brings darkness.  But even in the pitchest of black where there is no ability to see any form of light, God calls us to walk.

“Let him who walks in the dark, who has no light, trust in the name of the Lord and rely on his God.”

Yes, courage is often found on the battlefield.  Some are on battlefields that are tangible.  But courage is also found in those who every day get up, put their shoes on and walk back into a situation that is seemingly unchanging.  Courage is required as we walk in the dark of a situation and believe God is in control.  Courage is needed where there is no hope but move in such faith toward the victory.  Courage is essential as we trust in the very name of Jesus and rely on His wisdom and guidance and not ours.  Courage is seen again and again as we face whatever we are and boldly move forward as we know and trust our God.

Here in Isaiah 50 we read a soliloquy by the Servant as well as statements directed toward the believers and unbelievers of Israel. The soliloquy is found in the opening verses of 4-9 and the rest of the chapter addresses Israel.

In previous chapters, we have already been introduced to the Servant who many believe is foreshadowing Jesus Christ. Additionally, verse 4 reiterates the characteristics of this Servant. He will be taught by God what to say, so that He can strengthen the weary. We see this all through the Gospels.

As we all know, the tongue can build up or destroy people in an instant. The Bible speaks consistently about the power of words.

Who have sharpened their tongue like a sword. They aimed bitter speech as their arrow,

“They bend their tongue like their bow; Lies and not truth prevail in the land; For they proceed from evil to evil, And they do not know Me,” declares the LORD.

A soothing tongue is a tree of life, But perversion in it crushes the spirit.

These are just a few of the examples of how our words hold incredible power. The most dangerous part about words is that you can never take them back once they leave your lips. Yes, you can apologize, but the damage is still done.

Jesus appeals to the Father to give Him the right words to speak. He says the Lord will give him a tongue to sustain the weary with a word. So we find in this chapter that not only are words important, but they are given by God in order to be of service to others. Many times we seek to use words to show our talent, wisdom, or intellect. Jesus’ words were targeted at those who needed to be encouraged.

How much have you used your words in this way? Do you struggle to verbalize how you feel about others and what they mean to you?