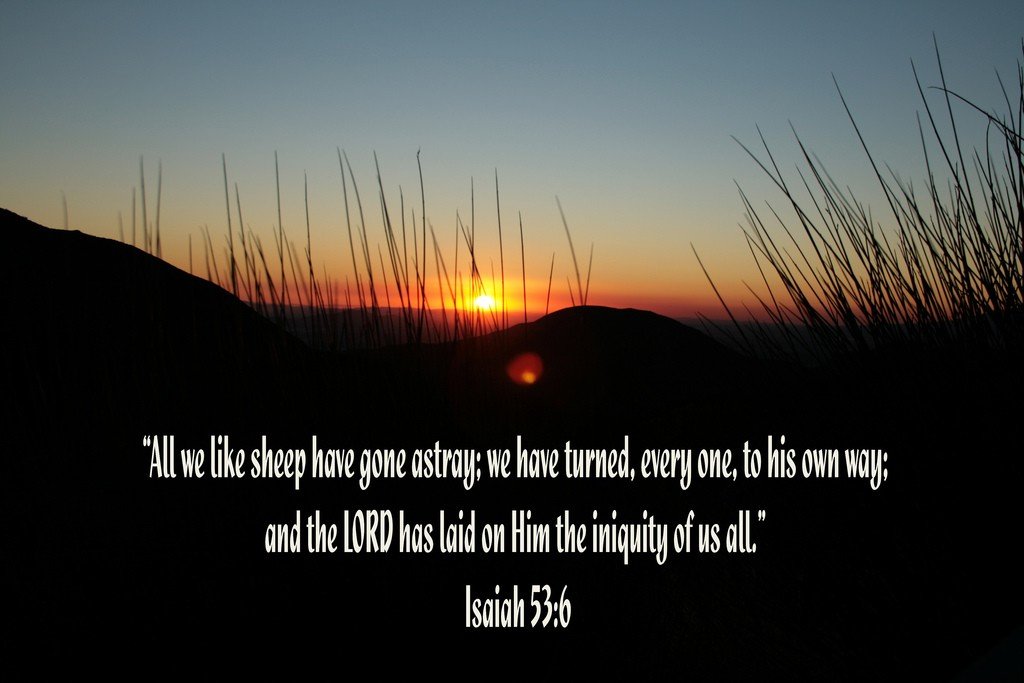 53   Who has believed what he has heard from us?
And to whom has the arm of the LORD been revealed?
For he grew up before him like a young plant,
and like a root out of dry ground;
he had no form or majesty that we should look at him,
and no beauty that we should desire him.
He was despised and rejected by men,
a man of sorrows and acquainted with grief;
and as one from whom men hide their faces
he was despised, and we esteemed him not.
Surely he has borne our griefs
and carried our sorrows;
yet we esteemed him stricken,
smitten by God, and afflicted.
But he was pierced for our transgressions;
he was crushed for our iniquities;
upon him was the chastisement that brought us peace,
and with his wounds we are healed.
All we like sheep have gone astray;
we have turned—every one—to his own way;
and the LORD has laid on him
the iniquity of us all.
He was oppressed, and he was afflicted,
yet he opened not his mouth;
like a lamb that is led to the slaughter,
and like a sheep that before its shearers is silent,
so he opened not his mouth.
By oppression and judgment he was taken away;
and as for his generation, who considered
that he was cut off out of the land of the living,
stricken for the transgression of my people?
And they made his grave with the wicked
and with a rich man in his death,
although he had done no violence,
and there was no deceit in his mouth.
Yet it was the will of the LORD to crush him;
he has put him to grief;
when his soul makes an offering for guilt,
he shall see his offspring; he shall prolong his days;
the will of the LORD shall prosper in his hand.
Out of the anguish of his soul he shall see and be satisfied;
by his knowledge shall the righteous one, my servant,
make many to be accounted righteous,
and he shall bear their iniquities.
Therefore I will divide him a portion with the many,
and he shall divide the spoil with the strong,
because he poured out his soul to death
and was numbered with the transgressors;
yet he bore the sin of many,
and makes intercession for the transgressors.

It was a moment when the curtain was pulled back.  Isaiah was given a front row seat to the magnificence of the Messiah and what He would offer.  It’s astounding really when you read the details of what Isaiah spoke of, could not have fully comprehended and yet saw something remarkable.

A Man of sorrows, He would be despised and rejected.  He would be One who people would hide their faces from.  But He, well He would take on our sin.  He would carry our sorrows.  He would be pierced and crushed for the waywardness of all man, the sin that had enveloped the human race.

But this would be where God revealed His plan.  The slaughter of a lamb had been established to the Israelite’s for the forgiveness of sin.  Isaiah was privy to a new form of forgiveness to be offered, the slaughter of the Lamb!  God’s chosen servant, His Son would take all the iniquity of the world, every sin imaginable and bear it through His death.  The incredible work on the cross and what Jesus would bring to all people and ultimate restoration to the Father.

The opening verse grabs my attention. “Who has believed our message?” It’s a rhetorical question but one that was referenced twice in the New Testament.

But though He had performed so many signs before them, yet they were not believing in Him. 38 This was to fulfill the word of Isaiah the prophet which he spoke: “LORD, WHO HAS BELIEVED OUR REPORT? AND TO WHOM HAS THE ARM OF THE LORD BEEN REVEALED?”

However, they did not all heed the good news; for Isaiah says, “LORD, WHO HAS BELIEVED OUR REPORT?”

Unbelief. Though He came just as Isaiah described, He was rejected just as Isaiah predicted. The irony here is that some person or group of people had to be aligned with the correct message regarding Jesus.  The verse says “Who has believed OUR message?” There would be a faithful remnant who would have their hearts opened to the Messiah.

We tend to think that everyone who acknowledges Christ is faithful to believing His Message. This is not always true. There will be many who call to Him, “Lord, Lord” and he will reply “I never knew you.” Just like the unbelieving generation that put Him on a cross, there are those today who give Him lip service but do not honor Him in their hearts.

Jesus is not part of a smorgasbord. He owns the restaurant and everything else in this world. It’s time that we began to honor Him as Savior AND Lord.