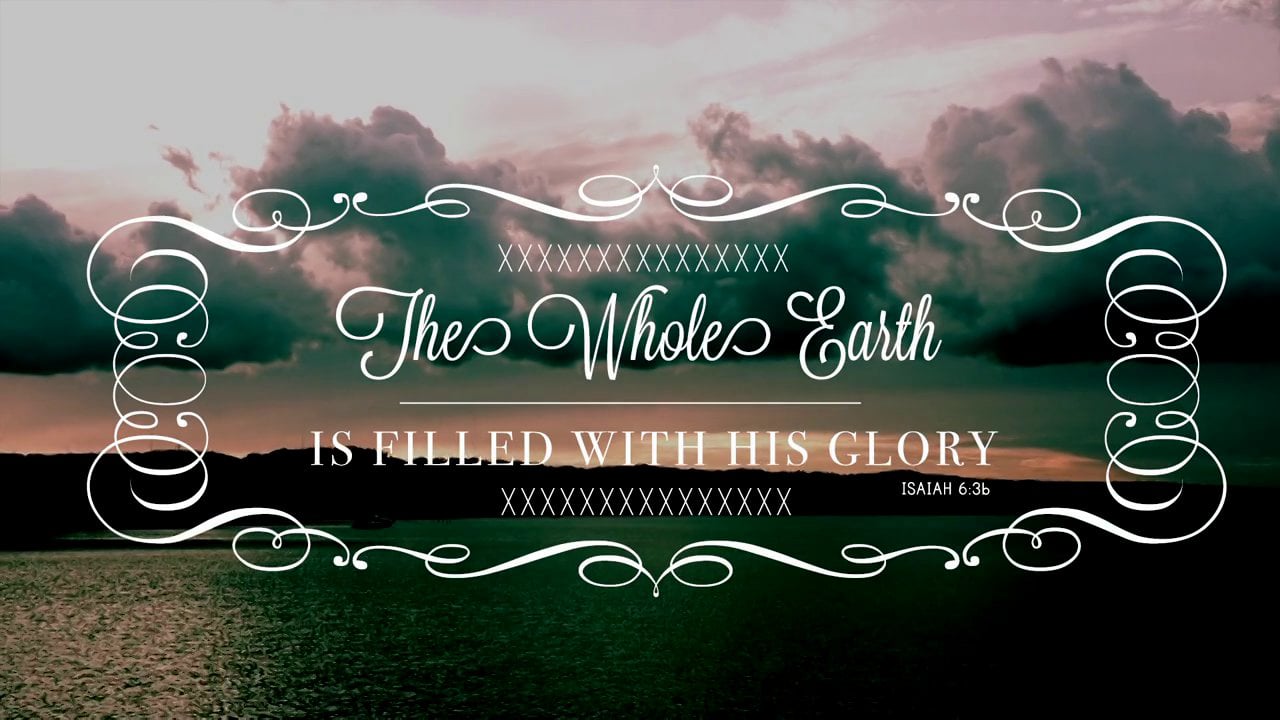 Isaiah’s Vision of the Lord

“Holy, holy, holy is the LORD of hosts;
the whole earth is full of his glory!”

And the foundations of the thresholds shook at the voice of him who called, and the house was filled with smoke. And I said: “Woe is me! For I am lost; for I am a man of unclean lips, and I dwell in the midst of a people of unclean lips; for my eyes have seen the King, the LORD of hosts!”

Then one of the seraphim flew to me, having in his hand a burning coal that he had taken with tongs from the altar. And he touched my mouth and said: “Behold, this has touched your lips; your guilt is taken away, and your sin atoned for.”

Isaiah’s Commission from the Lord

“‘Keep on hearing, but do not understand;
keep on seeing, but do not perceive.’
Make the heart of this people dull,
and their ears heavy,
and blind their eyes;
lest they see with their eyes,
and hear with their ears,
and understand with their hearts,
and turn and be healed.”
Then I said, “How long, O Lord?”
And he said:
“Until cities lie waste
without inhabitant,
and houses without people,
and the land is a desolate waste,
and the LORD removes people far away,
and the forsaken places are many in the midst of the land.
And though a tenth remain in it,
it will be burned again,
like a terebinth or an oak,
whose stump remains
when it is felled.”
The holy seed is its stump.

It was a life changing vision.  An encounter with the Holy God that changed the complete trajectory of Isaiah’s life.

The vision revealed the greatness and power of God.  The throne was surrounded by the seraphs.  This name indicates and means ‘burn’.  In all the purity of God as these angelic beings being present it speaks of the absolute holiness of God.  Something to consider is in this moment all the immorality of Isaiah’s culture and the absolute deaf ears of the people, God reminded him of His holiness and sovereignty.

His majesty on full display it suddenly swept Isaiah to the reality of his own sinfulness.  We need such encounters.  We really do in this day and age.  So often our general responses to things, the culture that bombards us and yes wears us down, we need such an experience to the very calling God has for us as His ambassadors and the need for holiness.  For as Isaiah looked upon the vision he was acutely aware of his own uncleanliness with no hope of measuring up to the standards of holiness of what he saw.

What would take place was a painful cleansing process – coals applied to his lips.  It wasn’t the coals that made him clean, but God.  Yet, this instance of cleansing did something remarkable.  Isaiah submitted to the calling of God and was ready for service.  In reality his task would be unfulfilling as the people would not turn and the words of God would set him apart even from the people.  But he was ready to serve God.

There was such a change in Isaiah’s heart from this encounter.  He experienced God on a whole new level.  This led him toward obedience and stirred a longing to serve Him.  Seek out your God.  Be ready to be cleansed and prepared to minister for Him.  He has an assignment for each of us.  Such experiences with God will strengthen us for service!

The first 5 chapters of Isaiah outline his prophecies, but do not establish his calling. In chapter 6 we read the details of God’s calling for Isaiah.

In many ways, Isaiah filled a role least desired among men. He was a messenger during a time when the message was not positive. God’s judgment was building with Judah and it was Isaiah’s duty to confront them with truth. Confrontation is never easy. In fact, it’s awful! However, Isaiah’s heart broke for the people. He grieved in the same way the Lord did. He didn’t relay the message in a condescending way, but rather, from a position of love. Repentance and restoration dogged Isaiah’s mind.

Some theologians call the book of Isaiah “remnant theology.” Essentially, the judgment of the wicked and the salvation of the faithful remnant. It’s ironic to consider that the same man (Isaiah) who condemned Judah also foreknew their great victory through Christ. What I appreciate most about Isaiah is the continual reliance he places upon the Lord in all circumstances. He counted human wisdom as rubbish compared to God’s sovereignty. In order to fulfill his purpose, he had to!