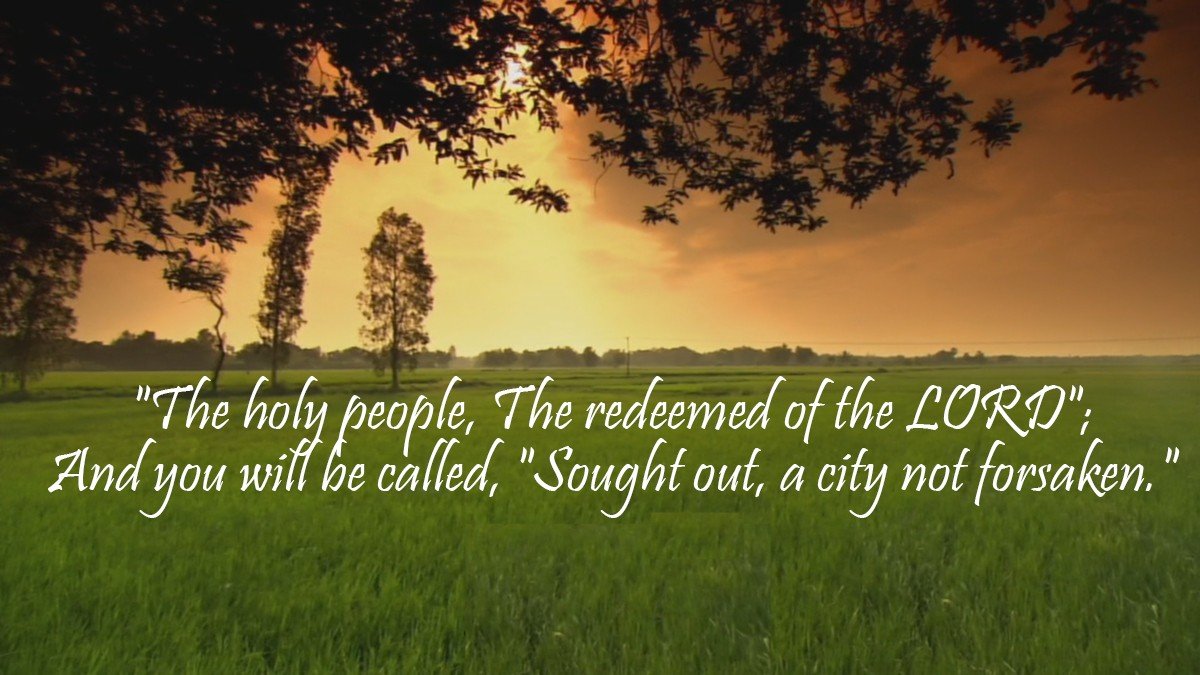 62   For Zion’s sake I will not keep silent,
and for Jerusalem’s sake I will not be quiet,
until her righteousness goes forth as brightness,
and her salvation as a burning torch.
The nations shall see your righteousness,
and all the kings your glory,
and you shall be called by a new name
that the mouth of the LORD will give.
You shall be a crown of beauty in the hand of the LORD,
and a royal diadem in the hand of your God.
You shall no more be termed Forsaken,
and your land shall no more be termed Desolate,
but you shall be called My Delight Is in Her,
and your land Married;
for the LORD delights in you,
and your land shall be married.
For as a young man marries a young woman,
so shall your sons marry you,
and as the bridegroom rejoices over the bride,
so shall your God rejoice over you.
On your walls, O Jerusalem,
I have set watchmen;
all the day and all the night
they shall never be silent.
You who put the LORD in remembrance,
take no rest,
and give him no rest
until he establishes Jerusalem
and makes it a praise in the earth.
The LORD has sworn by his right hand
and by his mighty arm:
“I will not again give your grain
to be food for your enemies,
and foreigners shall not drink your wine
for which you have labored;
but those who garner it shall eat it
and praise the LORD,
and those who gather it shall drink it
in the courts of my sanctuary.”
Go through, go through the gates;
prepare the way for the people;
build up, build up the highway;
clear it of stones;
lift up a signal over the peoples.
Behold, the LORD has proclaimed
to the end of the earth:
Say to the daughter of Zion,
“Behold, your salvation comes;
behold, his reward is with him,
and his recompense before him.”
And they shall be called The Holy People,
The Redeemed of the LORD;
and you shall be called Sought Out,
A City Not Forsaken.

“I will not keep silent.  I will not stop praying…until…”

In the opening of this passage where God speaks toward His people, He speaks incredible things.  He states His people are His crown, the splendor from His hand.  Hope is spoken as they will no longer be desolate or deserted.  He rejoices over His children as a bridegroom would over his bride.

These words spoken through Isaiah came at a time when Jerusalem was still functioning and in order but were spiritually bankrupt.  The exile had yet to come.  But even before the crisis’ of their lives had come God spoke toward His redemption.  You see, even though He knew what was coming, what the testing and refining of their lives personally would cost, He had a plan.  He had a way to which in the end they would be renewed and renamed.  They would be people on point.  He longs for that day.

One commentator states He will not rest until these things come to pass.  I love this.

Here we have the God of the universe not staying silent and laying down to the hard-hearted ways of people.  As the New Living Translation states, He will not remain silent and interestingly will pray for the end result.

Let’s get real.  Many times there are people in our lives who seemingly are so lost.  They have hardened their hearts to the voice of the Spirit.  They have become robots of faith with little to show in their lives.  They have willfully walked from the God who loves them deeply.  And we wonder.  We wonder what it will take for Him to reach them?  We question what events or personal hardship could be the tipping point?  As bystanders, this is one of the hardest aspects of loving people through their sinful willful behavior.

And sometimes we are these people.

But the hope to hang onto in the middle of such questions is God cares deeply.  He will do what He must to bring people back to Him.  As this passage opens – He will not remain silent.  He will stop praying.  He will not rest until the plans He has will be brought to reality.

Oh we know there are the aspects of free will and people even through the most horrendous of happenings still do not return to Him.  There are those who have hardened their hearts they never hear the whispering of the Spirit.  Some indeed do drift from their God and don’t find their way back.  But our hope as an observer and possibly involved in their lives even are the beautiful promises of this passage.  God will continue to do what is needed; He will not rest.  He will not stay silent and will provide every opportunity for them to return.

Pray for the wayward in your life.  Ask God to remember His Words of not staying silent and actively pursue these prodigals.  Claim the beautiful promises of their own future spoken through this passage given.

“Don’t stay silent God.  Don’t rest until they are back in the right relationship with You!”

And they will call them, “The holy people, The redeemed of the LORD”; And you will be called, “Sought out, a city not forsaken.”

As obedient children, do not be conformed to the former lusts which were yours in your ignorance, 15 but like the Holy One who called you, be holy yourselves also in all your behavior; 16 because it is written, “YOU SHALL BE HOLY, FOR I AM HOLY.”

The basis for holiness is not rules. It is done through a relational God who sees us, finds us, and saves us. We are sought out and not forsaken. Just let those thoughts sink in!