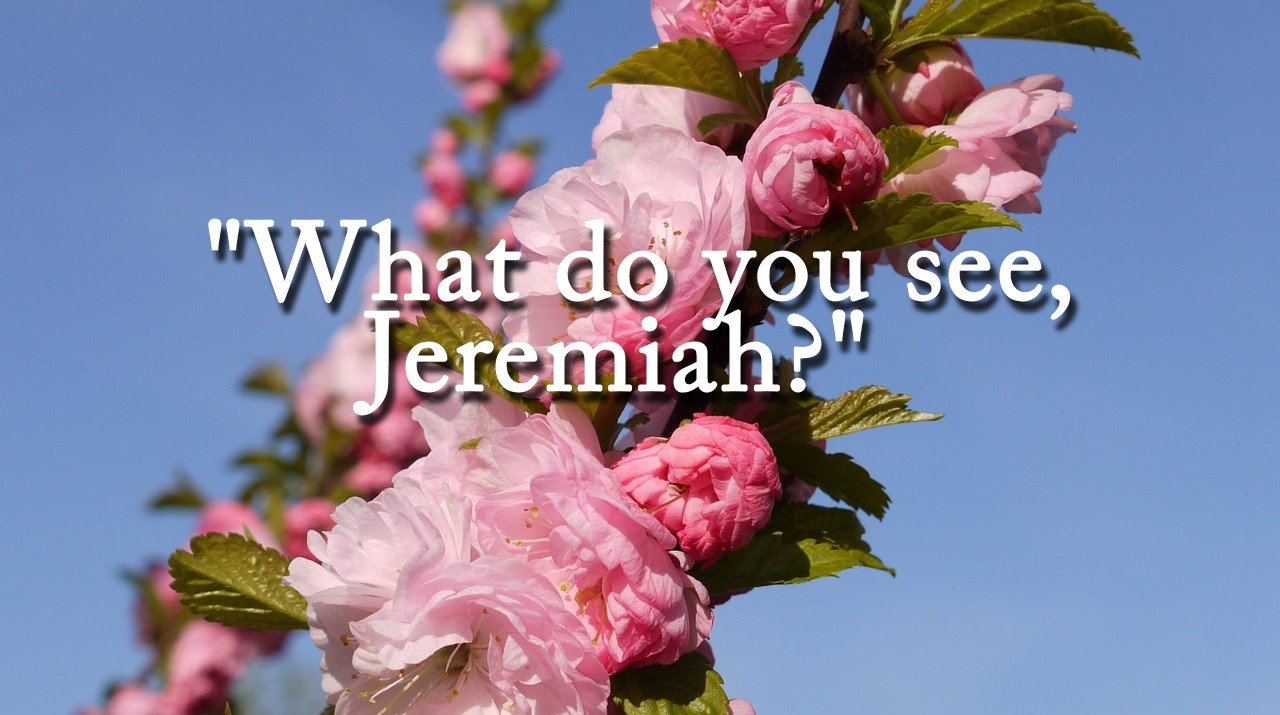 The Call of Jeremiah

Now the word of the LORD came to me, saying,

“Before I formed you in the womb I knew you,
and before you were born I consecrated you;
I appointed you a prophet to the nations.”

“Do not say, ‘I am only a youth’;
for to all to whom I send you, you shall go,
and whatever I command you, you shall speak.
Do not be afraid of them,
for I am with you to deliver you,
declares the LORD.”

Then the LORD put out his hand and touched my mouth. And the LORD said to me,

“Behold, I have put my words in your mouth.
See, I have set you this day over nations and over kingdoms,
to pluck up and to break down,
to destroy and to overthrow,
to build and to plant.”

And the word of the LORD came to me, saying, “Jeremiah, what do you see?” And I said, “I see an almond branch.” Then the LORD said to me, “You have seen well, for I am watching over my word to perform it.”

The word of the LORD came to me a second time, saying, “What do you see?” And I said, “I see a boiling pot, facing away from the north.” Then the LORD said to me, “Out of the north disaster shall be let loose upon all the inhabitants of the land. For behold, I am calling all the tribes of the kingdoms of the north, declares the LORD, and they shall come, and every one shall set his throne at the entrance of the gates of Jerusalem, against all its walls all around and against all the cities of Judah. And I will declare my judgments against them, for all their evil in forsaking me. They have made offerings to other gods and worshiped the works of their own hands. But you, dress yourself for work; arise, and say to them everything that I command you. Do not be dismayed by them, lest I dismay you before them. And I, behold, I make you this day a fortified city, an iron pillar, and bronze walls, against the whole land, against the kings of Judah, its officials, its priests, and the people of the land. They will fight against you, but they shall not prevail against you, for I am with you, declares the LORD, to deliver you.”

Success.  How do you measure it?  Is it ranked by how well you’re doing in your job?  What about reaching goals or having wealth?  Is success to be had by having a family, loads of friends, possibly a solid leader or one that people follow after?

We all have a measuring stick as to what we deem to be successful and how that affects us.

For Jeremiah, if this was the case he was nothing more than a failure.  For 40 years this prophet of Judah spoke boldly and consistently, even when it was the hardest thing to do.  Yet he was poor, unmarried, marginalized.  He was tossed in prison, thrown into a well, carried off to Egypt at one point.  His friends, family, neighbors all rejected him.  His audience being the kings and priests stood against him.  Much of his life he would stand alone declaring the voice of God and met with rejection.  By societies eyes and by our standards today he was very unsuccessful.

Where the important measurement was found was God.  There may have not been tangible things to point toward by others but God was pleased.  God saw him as successful because he was obedient.  Even if he didn’t want to give a particular word, wrestled with it, he always would do what was asked.  He endured personal loss due to his obedience.

I love the words God speaks to Jeremiah in his calling:  “I have put my words in your mouth…to uproot, and tear down, to destroy and overthrow, to build and plant.”  (Jeremiah 1:10)

Within these words spoken by God as to his mission, a road of boldness was going to be required through what he said.  His calling was sure but not guaranteed to be successful. He was simply called to be obedient and speak what was told of Him, stand for truth and let God do the rest.   His world hated him but God was pleased.

If we are dependent on others measurement that we are successful in whatever we are doing we will for certain run into a snag.  Looking for man’s approval will bring compromise every time.  Through the highs and lows of Jeremiah’s life, which by the way he records in this book his real feelings of sadness and hardship, in the end, he followed through.

This is exactly what God is looking for within each one of us.

When my wife and I first moved into our house, we immediately fell in love with the fenced in backyard. Though it was small, it was a nice escape from the hustle and bustle of the busy street nearby. The only problem was, we had no landscaping. Being somewhat interested in plants, I decided that I would design and create our entire backyard garden. For months, I would go to the big box stores and shop their clearance plants hoping to find something of interest for cheap. One of the first to be planted was the flowering almond tree.

At the time of planting, I knew nothing about it. It seemed nice and fit the space I was designing. However, over the years I’ve learned a lot about this small tree. In the spring, it is one of the first to bloom. Vibrant pink blossoms fill the branches quickly and provide some amazing color to begin the spring season. In Jeremiah 1:11, God confirms His call to Jeremiah by using the flowering almond tree.

The word of the LORD came to me saying, “What do you see, Jeremiah?” And I said, “I see a rod of an almond tree.” 12 Then the LORD said to me, “You have seen well, for I am watching over My word to perform it.”

As I said, the almond tree blossoms early when other trees still lie dormant. In fact, other than our daffodils, I don’t know of any plant in our entire garden that blooms before the almond tree. God used this example for a reason. The almond came early as if to “watch over” the beginning of the season. It was the first to rise and is known as “the wakeful tree.” Unfortunately, for Israel, this tree represented God’s watchful eye over the nation. His judgment was coming.

It’s interesting to consider that many times we forget of God’s watchful eye over our daily actions. We forget that we have been given time by God. He is the one who will hold us accountable for how we used His time. The opening to Jeremiah is a sobering reminder that the Lord is not slow to act. He is always on time and works according to His Word. His watchful eye sees all and He will be faithful to deliver on His promises.