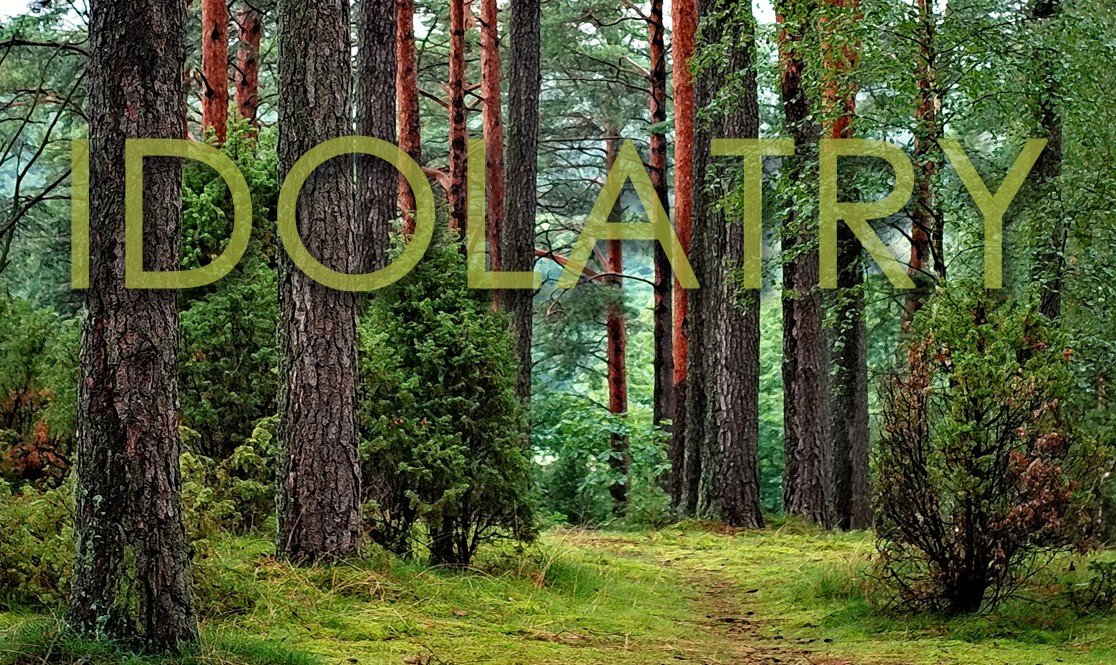 Idols and the Living God

10 Hear the word that the LORD speaks to you, O house of Israel. Thus says the LORD:

“Learn not the way of the nations,
nor be dismayed at the signs of the heavens
because the nations are dismayed at them,
for the customs of the peoples are vanity.
A tree from the forest is cut down
and worked with an axe by the hands of a craftsman.
They decorate it with silver and gold;
they fasten it with hammer and nails
so that it cannot move.
Their idols are like scarecrows in a cucumber field,
and they cannot speak;
they have to be carried,
for they cannot walk.
Do not be afraid of them,
for they cannot do evil,
neither is it in them to do good.”
There is none like you, O LORD;
you are great, and your name is great in might.
Who would not fear you, O King of the nations?
For this is your due;
for among all the wise ones of the nations
and in all their kingdoms
there is none like you.
They are both stupid and foolish;
the instruction of idols is but wood!
Beaten silver is brought from Tarshish,
and gold from Uphaz.
They are the work of the craftsman and of the hands of the goldsmith;
their clothing is violet and purple;
they are all the work of skilled men.
But the LORD is the true God;
he is the living God and the everlasting King.
At his wrath the earth quakes,
and the nations cannot endure his indignation.

Thus shall you say to them: “The gods who did not make the heavens and the earth shall perish from the earth and from under the heavens.”

It is he who made the earth by his power,
who established the world by his wisdom,
and by his understanding stretched out the heavens.
When he utters his voice, there is a tumult of waters in the heavens,
and he makes the mist rise from the ends of the earth.
He makes lightning for the rain,
and he brings forth the wind from his storehouses.
Every man is stupid and without knowledge;
every goldsmith is put to shame by his idols,
for his images are false,
and there is no breath in them.
They are worthless, a work of delusion;
at the time of their punishment they shall perish.
Not like these is he who is the portion of Jacob,
for he is the one who formed all things,
and Israel is the tribe of his inheritance;
the LORD of hosts is his name.
Gather up your bundle from the ground,
O you who dwell under siege!
For thus says the LORD:
“Behold, I am slinging out the inhabitants of the land
at this time,
and I will bring distress on them,
that they may feel it.”
Woe is me because of my hurt!
My wound is grievous.
But I said, “Truly this is an affliction,
and I must bear it.”
My tent is destroyed,
and all my cords are broken;
my children have gone from me,
and they are not;
there is no one to spread my tent again
and to set up my curtains.
For the shepherds are stupid
and do not inquire of the LORD;
therefore they have not prospered,
and all their flock is scattered.
A voice, a rumor! Behold, it comes!—
a great commotion out of the north country
to make the cities of Judah a desolation,
a lair of jackals.
I know, O LORD, that the way of man is not in himself,
that it is not in man who walks to direct his steps.
Correct me, O LORD, but in justice;
not in your anger, lest you bring me to nothing.
Pour out your wrath on the nations that know you not,
and on the peoples that call not on your name,
for they have devoured Jacob;
they have devoured him and consumed him,
and have laid waste his habitation.

The forest became an idol factory.  The people lived in fear of what these pieces of wood carved in some likeness could do them.  They relied on their gods rather than the true God.  Punishment would come as they would be upended, taken from their land and live as nomads.

The picture grim, Jeremiah finds his heart completely overwhelmed.   Imagine carrying such a weight of truth and knowing things to come.  Imagine being weighted by burden where you saw and had heard if someone didn’t turn back to God of the upheaval they would experience.  And imagine, there was nothing you could do about it.

Burdens like these are tough.  We all have them from time to time.  They steal our sleep, take our thoughts to heaviness and at times are all consuming.

For Jeremiah, he knows his message will be rejected.  He knows he will pay personally for it.  He also realizes that his path is not his own, for God is directing it at every turn.  For him being obedient to the message is what is important.

One of the many hard parts of our journey is trusting God with the lives of others.  His sovereignty is unending.  He will do whatever He must to get the people He loves back on track.   In such times we must be obedient to the calling He has for us.  Even if it means rejection.  Even if it means we watch as lives are upended by their own willfulness.  God is looking for us to be steady and committed.

Let’s face it; we love idols.

Consumerism is drilled into us at an early age. Most of what we use our money to buy has planned obsolescence meaning the product is limited and we will eventually shelve it in order to buy the latest and greatest model. It’s nearly impossible to avoid the new things continually coming down the conveyor belt touting the “you NEED this” slogan.

But idol worship doesn’t just involve material possessions. Even things considered “good” by many (love, power, success, popularity) can overwhelm us with their subtle influence. These days there are so many who consider the Bible to be old and outdated so they pursue so-called higher knowledge and enlightenment in order to feel significant and empowered.

I believe an idol is most easily identified by one simple detail – we go back to it. Just as quickly as the people of Israel were drawn away from their idols they would jump back into them. Many times, it started as an innocent curiosity. But over time, the idols would steal their hearts and they would forget about God. I’m being honest when I say there are some who I grieve over because their return to idolatry is right now ruining their life.

Such idols are like scarecrows in a field of melons; they cannot speak; they have to be carried because they cannot walk. Do not be afraid of them: they can cause you no harm, and they can do you no good.” 6 LORD, there is no one like you; you are mighty, and your name is great and powerful.

Idols are powerless. They are time-wasters. They are life-stealers. They tell us they can meet our needs but waste no time putting shackles on our wrists. Without the conviction and freedom found in Jesus, we will live in this prison convincing ourselves it’s alright while we rot in our misery. Our greatest prayer is for divine intervention. There is Good News to be found! There is grace in Jesus Christ.

LORD, I know that none of us are in charge of our own destiny; none of us have control over our own life. 24 Correct your people, LORD, but do not be too hard on us or punish us when you are angry; that would be the end of us.