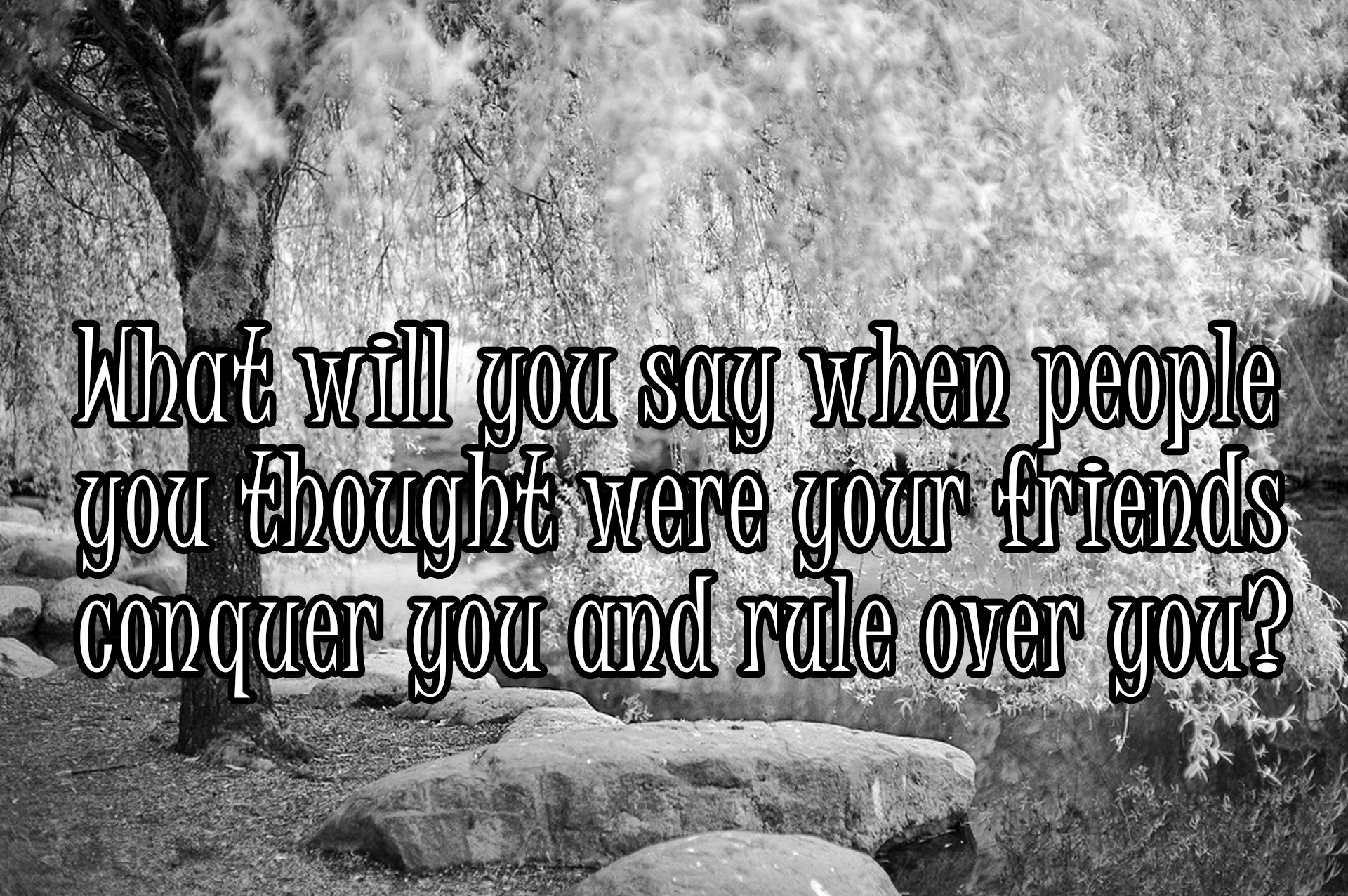 Then the word of the LORD came to me: “Thus says the LORD: Even so will I spoil the pride of Judah and the great pride of Jerusalem. This evil people, who refuse to hear my words, who stubbornly follow their own heart and have gone after other gods to serve them and worship them, shall be like this loincloth, which is good for nothing. For as the loincloth clings to the waist of a man, so I made the whole house of Israel and the whole house of Judah cling to me, declares the LORD, that they might be for me a people, a name, a praise, and a glory, but they would not listen.

The Jars Filled with Wine

“You shall speak to them this word: ‘Thus says the LORD, the God of Israel, “Every jar shall be filled with wine.”’ And they will say to you, ‘Do we not indeed know that every jar will be filled with wine?’ Then you shall say to them, ‘Thus says the LORD: Behold, I will fill with drunkenness all the inhabitants of this land: the kings who sit on David’s throne, the priests, the prophets, and all the inhabitants of Jerusalem. And I will dash them one against another, fathers and sons together, declares the LORD. I will not pity or spare or have compassion, that I should not destroy them.’”

Hear and give ear; be not proud,
for the LORD has spoken.
Give glory to the LORD your God
before he brings darkness,
before your feet stumble
on the twilight mountains,
and while you look for light
he turns it into gloom
and makes it deep darkness.
But if you will not listen,
my soul will weep in secret for your pride;
my eyes will weep bitterly and run down with tears,
because the LORD’s flock has been taken captive.
Say to the king and the queen mother:
“Take a lowly seat,
for your beautiful crown
has come down from your head.”
The cities of the Negeb are shut up,
with none to open them;
all Judah is taken into exile,
wholly taken into exile.
“Lift up your eyes and see
those who come from the north.
Where is the flock that was given you,
your beautiful flock?
What will you say when they set as head over you
those whom you yourself have taught to be friends to you?
Will not pangs take hold of you
like those of a woman in labor?
And if you say in your heart,
‘Why have these things come upon me?’
it is for the greatness of your iniquity
that your skirts are lifted up
and you suffer violence.
Can the Ethiopian change his skin
or the leopard his spots?
Then also you can do good
who are accustomed to do evil.
I will scatter you like chaff
driven by the wind from the desert.
This is your lot,
the portion I have measured out to you, declares the LORD,
because you have forgotten me
and trusted in lies.
I myself will lift up your skirts over your face,
and your shame will be seen.
I have seen your abominations,
your adulteries and neighings, your lewd whorings,
on the hills in the field.
Woe to you, O Jerusalem!
How long will it be before you are made clean?”

Arrogance gets in the way of our relationship with God every time.  Spiritual pride, which is found over and over again throughout the body of Believers destroys.  And yes, I’m speaking toward spiritual pride within the Body, not those outside.

The insidiousness of this is far-reaching.  It’s found in the Believer who looks down upon another.  It’s seen when one holds firmly to their wealth and resources only doling out when they want.  It’s there when a person forces their ideas and ‘wisdom’ on another’s struggle.  It’s the thought that we have what we have due to our own work instead of the blessing of God.  Spiritual arrogance is seen when we believe God has uniquely spoken to us (again and again) when the fruit of those words are not to be found.  Pride is driven by our determination to do what we want, fulfill our plans rather than seeking and living in God’s directives.

Spiritual arrogance destroys.  Pride builds walls between other Believer’s in the Body of Christ and between our own relationship with Him.  It is a force to reckoned with.

It was not something worn as an accessory.  A linen belt actually was a very intimate piece of clothing.  Much like underwear today it clung closely to the body.  It’s so interesting God would direct Jeremiah to use this intimate apparel to speak to the people as an object lesson.  First, it was taken and hidden in a rock.  Then he was told to retrieve it where it had become completely useless, filthy and worn.

Hold on – here’s a fascinating point to consider.  Since God was speaking to the people about their own pride, isn’t it amazing He would use an intimate piece of apparel to speak to the condition of their hearts and ways?  On many levels, this intimate garment represented the intimacy God wanted between the people and themselves.  So close to him, as underwear is physically, this was His desire for them.  Now it was completely useless.  Their pride had gotten in the way; their sinfulness shown in how dirty and worn the garment had become.

Pride destroys.  As the writer of the proverb pens, it comes before a fall.  That tumble may not come in the way we expect but it will come nonetheless.  Why?  Because God wants intimacy with us and will remove every roadblock needed to bring it.

Stop and pause.  Is their pride in your life?  Are you operating in such a way through your decisions and ways?  This is affecting the Body of Christ.  It’s affecting your witness, your outreach, and the state of your heart.  Search and ask, see what the Holy Spirit is speaking to you on this matter.

Burdens for people can be so heavy. When we sense that the ways of Jesus are not a priority in someone’s life, there is heartache and sorrow. God brings our attention to His heart which breaks over those who just will not bend the knee. This was the case for Jeremiah!

He watched his people make choices that led them into the dark. They were completely indifferent to both God’s words that had come so boldly as well as Jeremiah’s words of warning. Chapter after chapter we see Jeremiah pleading for the people to be driven back to their God and not the gods they had chosen to follow. Jeremiah is deeply moved to tears. He is heated with righteous anger.

Unlike the people of Judah, Jeremiah recognized the times, and the soon-to-be invasion from Babylon. He saw all the turmoil and devastation their choices were about to bring. Although they were unconcerned, Jeremiah’s heart continued to break at their blindness.

Jeremiah was not special in the sense that he was worthy to see and know these things. Yes, he was obedient, but God chose to reveal His heart and his plan just like He did the people. Jeremiah responded. The insight that was gained was not a waste. Jeremiah’s call was to weep for his people. His call was to be burdened for their sin. His mission was to proclaim truth even though Babylon was coming. These were tough times, no doubt. But, this is was Jeremiah’s purpose in God’s master plan.

In terms of great success stories and mighty warriors, Jeremiah would fall to the bottom of the list by human standards. By God’s, however, he was faithful. He did what was asked despite the toll it took on his mind, his heart, and his physical being. Many times as Christians we romanticize our faith into a happy-go-lucky life of blessings.

What if God calls you to proclaim truth to the deaf? What if God asks you to lead the blind? What if God’s plan for you is to weep over another’s sin? What if He asks you to boldly speak accountability into their life? What if your purpose in life is to walk with people who repeatedly fall day after day after day? Will you do it?