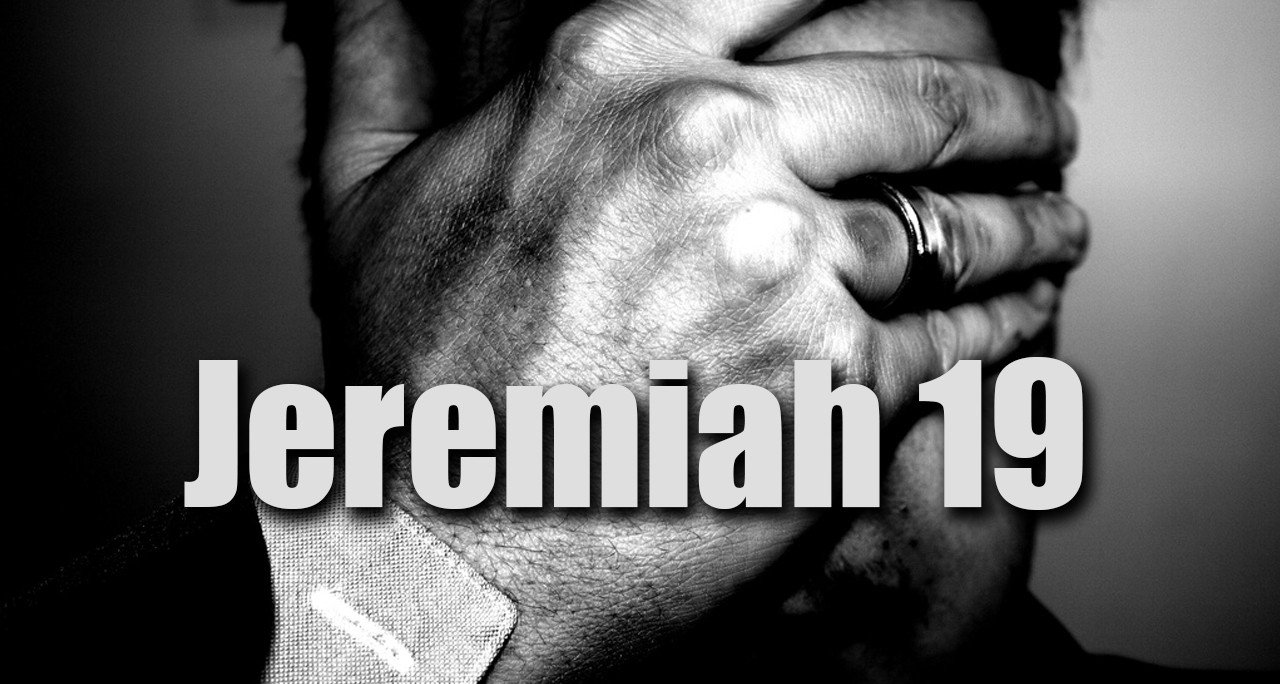 19 Thus says the LORD, “Go, buy a potter’s earthenware flask, and take some of the elders of the people and some of the elders of the priests, and go out to the Valley of the Son of Hinnom at the entry of the Potsherd Gate, and proclaim there the words that I tell you. You shall say, ‘Hear the word of the LORD, O kings of Judah and inhabitants of Jerusalem. Thus says the LORD of hosts, the God of Israel: Behold, I am bringing such disaster upon this place that the ears of everyone who hears of it will tingle. Because the people have forsaken me and have profaned this place by making offerings in it to other gods whom neither they nor their fathers nor the kings of Judah have known; and because they have filled this place with the blood of innocents, and have built the high places of Baal to burn their sons in the fire as burnt offerings to Baal, which I did not command or decree, nor did it come into my mind—therefore, behold, days are coming, declares the LORD, when this place shall no more be called Topheth, or the Valley of the Son of Hinnom, but the Valley of Slaughter. And in this place I will make void the plans of Judah and Jerusalem, and will cause their people to fall by the sword before their enemies, and by the hand of those who seek their life. I will give their dead bodies for food to the birds of the air and to the beasts of the earth. And I will make this city a horror, a thing to be hissed at. Everyone who passes by it will be horrified and will hiss because of all its wounds. And I will make them eat the flesh of their sons and their daughters, and everyone shall eat the flesh of his neighbor in the siege and in the distress, with which their enemies and those who seek their life afflict them.’

“Then you shall break the flask in the sight of the men who go with you, and shall say to them, ‘Thus says the LORD of hosts: So will I break this people and this city, as one breaks a potter’s vessel, so that it can never be mended. Men shall bury in Topheth because there will be no place else to bury. Thus will I do to this place, declares the LORD, and to its inhabitants, making this city like Topheth. The houses of Jerusalem and the houses of the kings of Judah—all the houses on whose roofs offerings have been offered to all the host of heaven, and drink offerings have been poured out to other gods—shall be defiled like the place of Topheth.’”

Then Jeremiah came from Topheth, where the LORD had sent him to prophesy, and he stood in the court of the LORD’s house and said to all the people: “Thus says the LORD of hosts, the God of Israel, behold, I am bringing upon this city and upon all its towns all the disaster that I have pronounced against it, because they have stiffened their neck, refusing to hear my words.”

His words would make the peoples ears tingle.  Coming destruction was upon them due to the hardness of their heart, much like the final product of the clay shaped, molded and fired.  The scene dramatic.  Jeremiah was called to take the vessel he watched made in chapter 18 and use this object lesson given to him as a presentation to the people.

The people had failed and actually hardened themselves to the words of God.  The formed pottery would give a far more alarming word of things to come.  Although in chapter 18 the vessel had been molded and formed, once it was slammed to the ground and shattered it would be irreparable.  As clay it had been worked again and again until perfect in the potter’s hand.  It was perfected, baked and consequently impossible to do any more reshaping.  That said, the shattered pottery would symbolize so much more as it was completely destroyed.

The object lesson spoke not only to the shaping of Israel but the demise.  God had divinely formed and molded his people.  Yet, due to the hardness of their hearts, not heeding His call upon their lives they lived in complete opposition to what He intended as a vessel.  The shards of pottery spoke to how useless they had become.  The vessel was set for doom.

And this was not by accident and here’s what is important to grasp.  God intended this to happen but it would be man who performed it.  Sadly it would be accomplished through violence.  Jerusalem and all – the entire generation would be broken.

Indeed this would all come to pass.  It would be in 586 BC that everything Jeremiah predicted with all the carnage and horrific behavior would take place during the invasion of Nebuchadnezzar.  Believe it or not, the prophecy would go for centuries though as it wasn’t until 70 AD that Titus completely destroyed the temple.

Here’s the takeaway – as the people of Israel were so hardened in their ways and hearts God would use many outside influences to bring a shattering and destruction.   As we know, His mercy would still prevail and He would watch over these people leading them once again to Him.  That said, destruction was required for humility to be front and center.  Unfortunately, there are many people who deny the workings of God in their lives.  They’ve tasted of the goodness of Him but chose for whatever reason to walk away.  Hardened of heart, there is no course for them but to have a complete shattering of their lives.  For some, it’s the only way He can reach them.

Are you one of these?  Are you burdened for someone that this course is set unless they repent?  Consider the sobering pictures found here.

What happens when we flirt with sin?

For whatever reason, our society has divided sin into many different levels and categories. Though Jesus taught that a sin in the heart is equal to a sin carried out, we continue to “rank” them today. As Jerry Bridges writes in his book Respectable Sins, “We often live in unconscious denial of our ‘acceptable sins.’”

During the time of Jeremiah, the people’s current state was viciously affected by a denial of acceptable sin. Though it’s true that all sin is evil, it’s also true that sin grows and grows taking over every aspect of our lives. Even worse, it has the capacity to take over the lives of others. In that same book, Respectable Sins, Jerry Bridges also writes this…

“Sin is a spiritual and moral malignancy. Left unchecked, it can spread throughout our entire inner being and contaminate every area of our lives. Even worse, it often will “metastasize” from us into the lives of other believers around us.”

Jeremiah 19 speaks to the growth of sin among the people. They had fallen so low as to engage in child sacrifice to false gods – something they fell into many times during their history. This act was repulsive to God. From the beginning, He was clear that such an act was completely sickening (Gen 22).

and have built the high places of Baal to burn their sons in the fire as burnt offerings to Baal, a thing which I never commanded or spoke of, nor did it ever enter My mind;

For the people of Jeremiah’s time and for us today, we cannot compromise in our fight against sin. Through Jesus, we are given power and authority to resist temptation. Through grace, we can face sin and confess it to others. If there were no grace, we would never come forward, because the shame would be too great. But Praise God this is not the case! He has given us new life through His Son so we can walk in confidence and authority while resisting the enemy and his schemes.