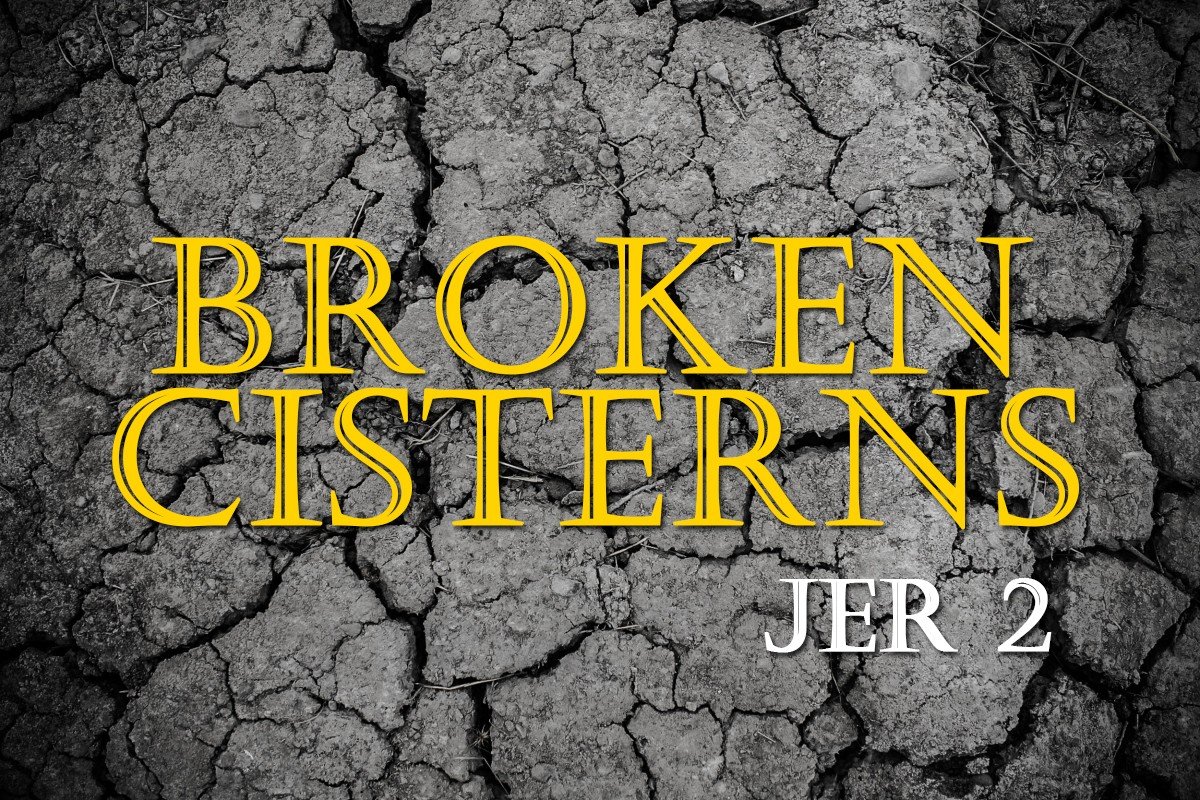 2 The word of the LORD came to me, saying, “Go and proclaim in the hearing of Jerusalem, Thus says the LORD,

“I remember the devotion of your youth,
your love as a bride,
how you followed me in the wilderness,
in a land not sown.
Israel was holy to the LORD,
the firstfruits of his harvest.
All who ate of it incurred guilt;
disaster came upon them,
declares the LORD.”

Hear the word of the LORD, O house of Jacob, and all the clans of the house of Israel. Thus says the LORD:

“What wrong did your fathers find in me
that they went far from me,
and went after worthlessness, and became worthless?
They did not say, ‘Where is the LORD
who brought us up from the land of Egypt,
who led us in the wilderness,
in a land of deserts and pits,
in a land of drought and deep darkness,
in a land that none passes through,
where no man dwells?’
And I brought you into a plentiful land
to enjoy its fruits and its good things.
But when you came in, you defiled my land
and made my heritage an abomination.
The priests did not say, ‘Where is the LORD?’
Those who handle the law did not know me;
the shepherds transgressed against me;
the prophets prophesied by Baal
and went after things that do not profit.
“Therefore I still contend with you,
declares the LORD,
and with your children’s children I will contend.
For cross to the coasts of Cyprus and see,
or send to Kedar and examine with care;
see if there has been such a thing.
Has a nation changed its gods,
even though they are no gods?
But my people have changed their glory
for that which does not profit.
Be appalled, O heavens, at this;
be shocked, be utterly desolate,
declares the LORD,
for my people have committed two evils:
they have forsaken me,
the fountain of living waters,
and hewed out cisterns for themselves,
broken cisterns that can hold no water.
“Is Israel a slave? Is he a homeborn servant?
Why then has he become a prey?
The lions have roared against him;
they have roared loudly.
They have made his land a waste;
his cities are in ruins, without inhabitant.
Moreover, the men of Memphis and Tahpanhes
have shaved the crown of your head.
Have you not brought this upon yourself
by forsaking the LORD your God,
when he led you in the way?
And now what do you gain by going to Egypt
to drink the waters of the Nile?
Or what do you gain by going to Assyria
to drink the waters of the Euphrates?
Your evil will chastise you,
and your apostasy will reprove you.
Know and see that it is evil and bitter
for you to forsake the LORD your God;
the fear of me is not in you,
declares the Lord GOD of hosts.
“For long ago I broke your yoke
and burst your bonds;
but you said, ‘I will not serve.’
Yes, on every high hill
and under every green tree
you bowed down like a whore.
Yet I planted you a choice vine,
wholly of pure seed.
How then have you turned degenerate
and become a wild vine?
Though you wash yourself with lye
and use much soap,
the stain of your guilt is still before me,
declares the Lord GOD.
How can you say, ‘I am not unclean,
I have not gone after the Baals’?
Look at your way in the valley;
know what you have done—
a restless young camel running here and there,
a wild donkey used to the wilderness,
in her heat sniffing the wind!
Who can restrain her lust?
None who seek her need weary themselves;
in her month they will find her.
Keep your feet from going unshod
and your throat from thirst.
But you said, ‘It is hopeless,
for I have loved foreigners,
and after them I will go.’
“As a thief is shamed when caught,
so the house of Israel shall be shamed:
they, their kings, their officials,
their priests, and their prophets,
who say to a tree, ‘You are my father,’
and to a stone, ‘You gave me birth.’
For they have turned their back to me,
and not their face.
But in the time of their trouble they say,
‘Arise and save us!’
But where are your gods
that you made for yourself?
Let them arise, if they can save you,
in your time of trouble;
for as many as your cities
are your gods, O Judah.
“Why do you contend with me?
You have all transgressed against me,
declares the LORD.
In vain have I struck your children;
they took no correction;
your own sword devoured your prophets
like a ravening lion.
And you, O generation, behold the word of the LORD.
Have I been a wilderness to Israel,
or a land of thick darkness?
Why then do my people say, ‘We are free,
we will come no more to you’?
Can a virgin forget her ornaments,
or a bride her attire?
Yet my people have forgotten me
days without number.
“How well you direct your course
to seek love!
So that even to wicked women
you have taught your ways.
Also on your skirts is found
the lifeblood of the guiltless poor;
you did not find them breaking in.
Yet in spite of all these things
you say, ‘I am innocent;
surely his anger has turned from me.’
Behold, I will bring you to judgment
for saying, ‘I have not sinned.’
How much you go about,
changing your way!
You shall be put to shame by Egypt
as you were put to shame by Assyria.
From it too you will come away
with your hands on your head,
for the LORD has rejected those in whom you trust,
and you will not prosper by them.

We’ve all been there.  Someone promised something and reneged down the line on their follow through.  Sometimes it left us hanging.  Other times it downright infuriated us.  But in this experience, we knew we really couldn’t depend upon them.  Sometimes we gave another chance or two even as it could have been a one-off.  But when the backing out of their commitment became habitual, we stepped away and didn’t ask them again.

We each long for commitment from others in one form or another.  Actually from business contracts to wedding vows to friendships to so many other walks of life, spoken and agreed upon commitments are expected to be followed through on.  So compare your own feelings when someone chooses not to be committed personally and what God’s feelings are on the matter.

God had given everything to Judah yet they failed in their commitment level.  Opening up He asks these wayward people to simply reflect back on the previous days and how devoted they were to Him.  Looking upon them as His bride, or vineyard or crop of harvest He expected them to be faithful; to bear fruit.  He expected them to keep their commitments.  Yet, they chose not to.  Other things became more important and a strong word of their character is spoken:

“They followed worthless idols and became worthless themselves.”

These are strong words.  Being called worthless, well I can think of not much more hard-hitting.  But in following other idols of the land exchanged their glory, the glory of God for worthless things becoming worthless itself.

Consider your own coming to Jesus.  Remember when that was.  Remember what your feelings were of such joy and gratitude.  Remember what all He was doing in your life during that amazing experience.  What about now?  Do you hold such a fervent love for Him?  Are you faithful?  Are you on point?  Are you making decisions based upon His direction?

Our poor response to Jesus who sacrificed everything for us is shameful.  We who want to design our life, control our decisions abandon the wonderful grace that brought us to Him in the first place.  He has provided so much for us and put upon each His robes of righteousness and yet our response is neglect, oversight, lack of commitment.  We’ve become worthless as we pursue our own agenda and ways, rather than His.

“For My people have committed two evils: They have forsaken Me, The fountain of living waters, To hew for themselves cisterns, Broken cisterns That can hold no water.

This is what we do, right? We make the decision to leave the protection and provision of God. We walk out of His house onto the streets to live on our own. The rains and floods come and we have no place to go. We know that we are becoming sicker but we continue to feed ourselves with rodents instead of bread. We drink out of broken cisterns that never really hold water and always leave us thirsty for more. We commit two evils. The first is leaving the house. The second is filling up on everything we know will never satisfy.

God’s people knew better. This was not their first time abandoning God. In fact, much of their history included God rescuing them from such horrific circumstances after they turned and repented. But like an unfaithful lover, they return to their mistress again and again.

Many people read the Old Testament and feel like it’s overly negative or just too graphic. It’s honest. Just because the Bible describes it does not mean it prescribes it. If anything, we should be able to see the folly of our human nature even more clearly knowing that we are these people. We must take a moment and consider forgiveness. Through Jesus, we have the power to choose righteousness. As we look at our own life, we can identify areas where we’ve walked out on God and then attempted to replace Him with something else. This awareness brings new life to the Good News of the Gospel.