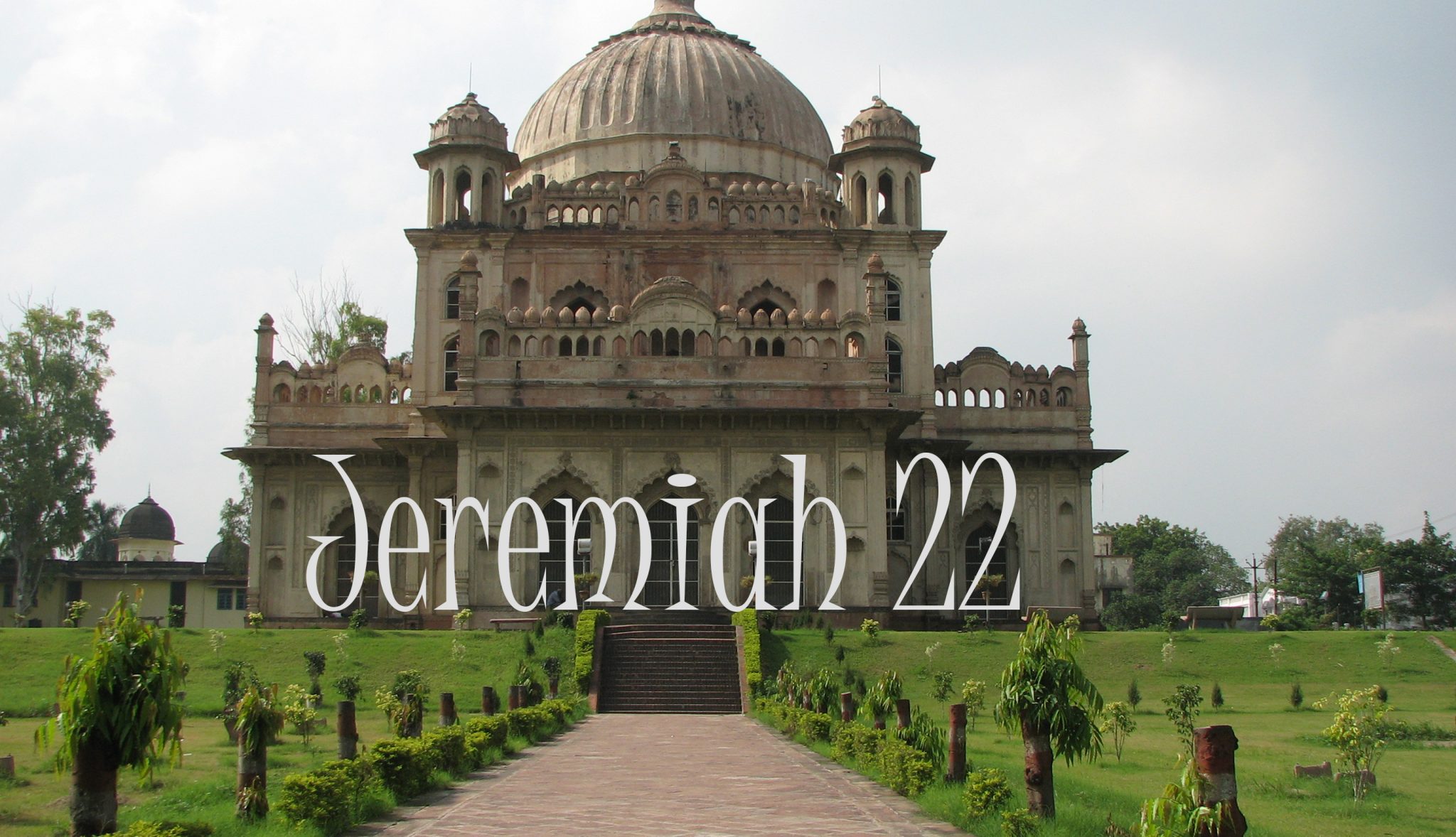 22 Thus says the LORD: “Go down to the house of the king of Judah and speak there this word, and say, ‘Hear the word of the LORD, O king of Judah, who sits on the throne of David, you, and your servants, and your people who enter these gates. Thus says the LORD: Do justice and righteousness, and deliver from the hand of the oppressor him who has been robbed. And do no wrong or violence to the resident alien, the fatherless, and the widow, nor shed innocent blood in this place. For if you will indeed obey this word, then there shall enter the gates of this house kings who sit on the throne of David, riding in chariots and on horses, they and their servants and their people. But if you will not obey these words, I swear by myself, declares the LORD, that this house shall become a desolation. For thus says the LORD concerning the house of the king of Judah:

“‘You are like Gilead to me,
like the summit of Lebanon,
yet surely I will make you a desert,
an uninhabited city.
I will prepare destroyers against you,
each with his weapons,
and they shall cut down your choicest cedars
and cast them into the fire.

“‘And many nations will pass by this city, and every man will say to his neighbor, “Why has the LORD dealt thus with this great city?” And they will answer, “Because they have forsaken the covenant of the LORD their God and worshiped other gods and served them.”’”

Weep not for him who is dead,
nor grieve for him,
but weep bitterly for him who goes away,
for he shall return no more
to see his native land.

Message to the Sons of Josiah

For thus says the LORD concerning Shallum the son of Josiah, king of Judah, who reigned instead of Josiah his father, and who went away from this place: “He shall return here no more, but in the place where they have carried him captive, there shall he die, and he shall never see this land again.”

“Woe to him who builds his house by unrighteousness,
and his upper rooms by injustice,
who makes his neighbor serve him for nothing
and does not give him his wages,
who says, ‘I will build myself a great house
with spacious upper rooms,’
who cuts out windows for it,
paneling it with cedar
and painting it with vermilion.
Do you think you are a king
because you compete in cedar?
Did not your father eat and drink
and do justice and righteousness?
Then it was well with him.
He judged the cause of the poor and needy;
then it was well.
Is not this to know me?
declares the LORD.
But you have eyes and heart
only for your dishonest gain,
for shedding innocent blood,
and for practicing oppression and violence.”

“They shall not lament for him, saying,
‘Ah, my brother!’ or ‘Ah, sister!’
They shall not lament for him, saying,
‘Ah, lord!’ or ‘Ah, his majesty!’
With the burial of a donkey he shall be buried,
dragged and dumped beyond the gates of Jerusalem.”
“Go up to Lebanon, and cry out,
and lift up your voice in Bashan;
cry out from Abarim,
for all your lovers are destroyed.
I spoke to you in your prosperity,
but you said, ‘I will not listen.’
This has been your way from your youth,
that you have not obeyed my voice.
The wind shall shepherd all your shepherds,
and your lovers shall go into captivity;
then you will be ashamed and confounded
because of all your evil.
O inhabitant of Lebanon,
nested among the cedars,
how you will be pitied when pangs come upon you,
pain as of a woman in labor!”

Is this man Coniah a despised, broken pot,
a vessel no one cares for?
Why are he and his children hurled and cast
into a land that they do not know?
O land, land, land,
hear the word of the LORD!
Thus says the LORD:
“Write this man down as childless,
a man who shall not succeed in his days,
for none of his offspring shall succeed
in sitting on the throne of David
and ruling again in Judah.”

We know the difference between right and wrong.  There is something deep within every single person who recognizes this.  Our actions however many times are contrary to what we know to be true.  When our conscious becomes seared we will fall into choices and follow-through of things that are completely opposite to doing the right thing.

This comes from our own justification.  It tangibly shows itself when we are driven by our own will over what is the right thing to do.  It doesn’t mean the Spirit of God doesn’t wrestle with us over such matters, He most certainly does.  But the more we make excuses for why we can’t do the right thing, the easier it becomes to continue on the path of deception.

“Do what is just and right,” God says.  His statement speaks toward not just believing the right things about God Himself but taking action on them.  It’s living in obedience.  And many times that living in obedience is sacrificing our will again and again so we can heed the Spirit’s voice.

Again, we know the difference between right and wrong.  God has placed within each one of us such a barometer.  The question is where does this resonate currently for yourself?  Where is the Spirit leading you and what is He asking that goes against the tide of your own will?

Consider for a moment the opening passage of this chapter.

The LORD told me to go to the palace of the king of Judah, the descendant of David, and there tell the king, his officials, and the people of Jerusalem to listen to what the LORD had said:

The hated prophet, Jeremiah, was given palace access. Would it be easy for one of us to waltz into the White House and deliver a message to the President? Furthermore, would he even listen to us? From a leadership perspective, the king was out of touch with reality. It’s safe to say that his advisors had ulterior motives. I’m sure the king didn’t want to ruffle any feathers and most likely said what the people wanted to hear most times. And, as we know, the people wanted their sin.

So, Jeremiah is told to go to the palace and speak a bold message of truth. Like Moses before him who approached Pharoah, it would have been easy to say, “I can’t do this.”

“I’m not qualified, He won’t listen.”

The excuses are many. But again, God had a message. His deliverance of that message would lead Jeremiah past all the checkpoints in order to get face to face with this king. Through God’s sovereign hand, He was faithful to deliver Jeremiah to the exact place that He desired.

This is not uncommon. I’ve already written of Moses and Pharoah. Consider John the Baptist before Herod. Consider Jesus before Pontius Pilate. Consider Paul before Felix, Festus, and Agrippa. There was a message in all these instances and yes, that message fell on deaf ears. So what’s the point?

He was faithful to deliver both the message and the messenger according to His glory. What does this mean for us?

There are probably many things Jesus is speaking to each of us right now. Some are simple and others are more difficult. A few of them may seem impossible. The truth is, we must not lose sight of those who have gone before us and been led to accomplish God’s plan by stepping out in faith. It’s overwhelming to think of accomplishing anything God asks by relying on our own strength.