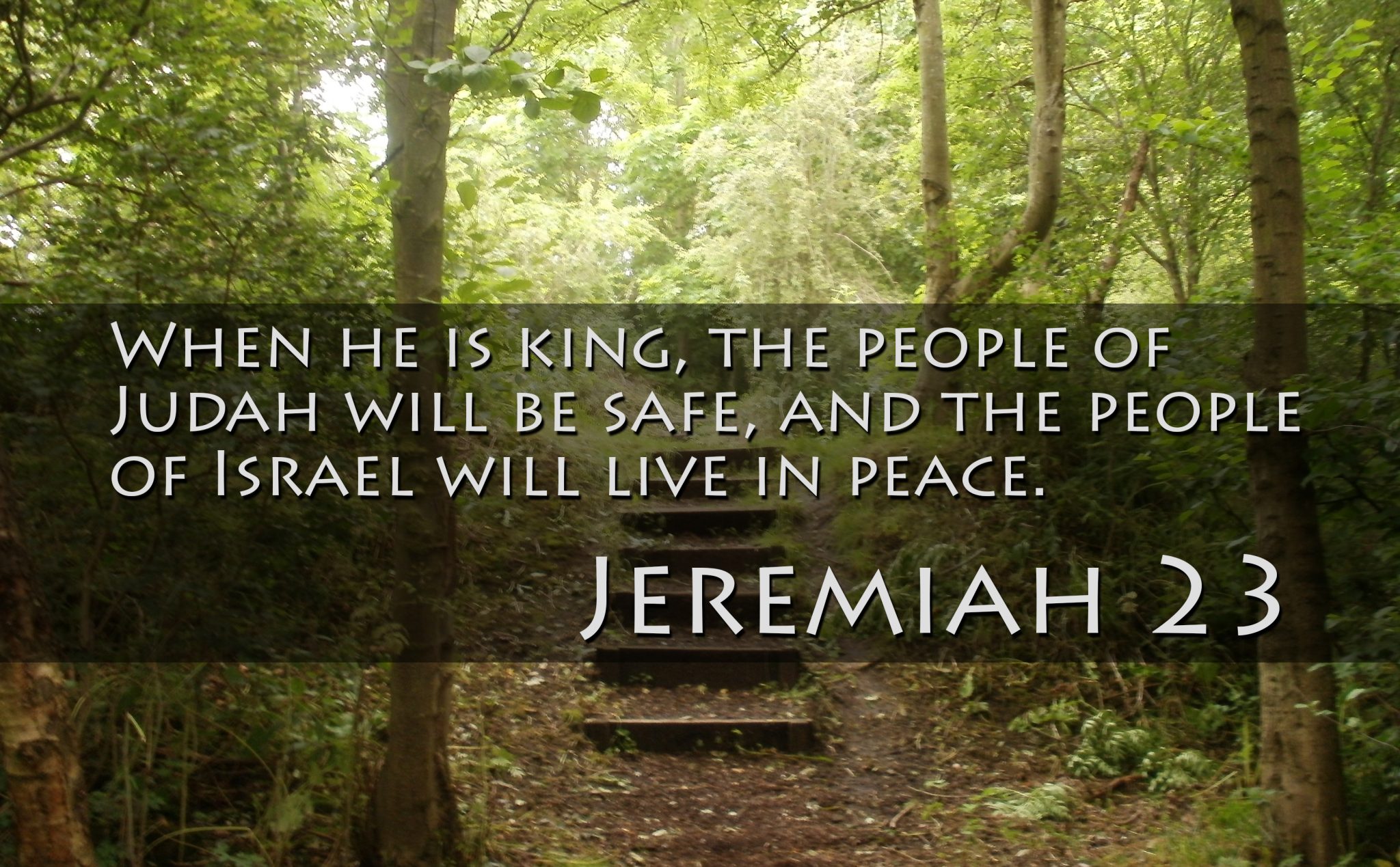 23 “Woe to the shepherds who destroy and scatter the sheep of my pasture!” declares the LORD. Therefore thus says the LORD, the God of Israel, concerning the shepherds who care for my people: “You have scattered my flock and have driven them away, and you have not attended to them. Behold, I will attend to you for your evil deeds, declares the LORD. Then I will gather the remnant of my flock out of all the countries where I have driven them, and I will bring them back to their fold, and they shall be fruitful and multiply. I will set shepherds over them who will care for them, and they shall fear no more, nor be dismayed, neither shall any be missing, declares the LORD.

“Behold, the days are coming, declares the LORD, when I will raise up for David a righteous Branch, and he shall reign as king and deal wisely, and shall execute justice and righteousness in the land. In his days Judah will be saved, and Israel will dwell securely. And this is the name by which he will be called: ‘The LORD is our righteousness.’

My heart is broken within me;
all my bones shake;
I am like a drunken man,
like a man overcome by wine,
because of the LORD
and because of his holy words.
For the land is full of adulterers;
because of the curse the land mourns,
and the pastures of the wilderness are dried up.
Their course is evil,
and their might is not right.
“Both prophet and priest are ungodly;
even in my house I have found their evil,
declares the LORD.
Therefore their way shall be to them
like slippery paths in the darkness,
into which they shall be driven and fall,
for I will bring disaster upon them
in the year of their punishment,
declares the LORD.
In the prophets of Samaria
I saw an unsavory thing:
they prophesied by Baal
and led my people Israel astray.
But in the prophets of Jerusalem
I have seen a horrible thing:
they commit adultery and walk in lies;
they strengthen the hands of evildoers,
so that no one turns from his evil;
all of them have become like Sodom to me,
and its inhabitants like Gomorrah.”
Therefore thus says the LORD of hosts concerning the prophets:
“Behold, I will feed them with bitter food
and give them poisoned water to drink,
for from the prophets of Jerusalem
ungodliness has gone out into all the land.”

Thus says the LORD of hosts: “Do not listen to the words of the prophets who prophesy to you, filling you with vain hopes. They speak visions of their own minds, not from the mouth of the LORD. They say continually to those who despise the word of the LORD, ‘It shall be well with you’; and to everyone who stubbornly follows his own heart, they say, ‘No disaster shall come upon you.’”

For who among them has stood in the council of the LORD
to see and to hear his word,
or who has paid attention to his word and listened?
Behold, the storm of the LORD!
Wrath has gone forth,
a whirling tempest;
it will burst upon the head of the wicked.
The anger of the LORD will not turn back
until he has executed and accomplished
the intents of his heart.
In the latter days you will understand it clearly.
“I did not send the prophets,
yet they ran;
I did not speak to them,
yet they prophesied.
But if they had stood in my council,
then they would have proclaimed my words to my people,
and they would have turned them from their evil way,
and from the evil of their deeds.

Accountability in leadership – it is something much needed.  No matter what the role may be, from your home to your job to leadership within a congregation – accountability is required for lives to flourish.  It’s the check and balance of things.  It’s the determination of fertile ground for growth and fruit.  Jesus calls us to different forms of leadership.  How we live and react and are is unveiled in time.  Either we are who we claim to be as a Believer in Him or we pose in public and show our true colors in private.

When a leader in the family lives 2 different lives, from the public to the private, their leadership in the home suffers.  In fact, the real person often is seen within the walls of the house.  When a parent is not on track or in tune with Jesus, what they translate to their mate and children will have far-reaching consequences.  Many times the groundwork is being laid before children as to who Jesus is based on our own actions and faith.

In the secular world, our leadership is key.  Often surrounded by non-Believers the decisions we make, the way we interact is a direct reflection of our own personal relationship with Jesus.  People are smart.  They know when someone is not a fully committed Follower.  It translates to their respect or lack thereof concerning ourselves.

In the church, once again Godly leadership is a necessity.  Everything rises and falls on leadership.  If we are faithless or skeptical, this many times translates to the faith instilled within the Body.  If we are bent on our own way, not humble in heart or serving others it will have a direct impact on how the congregation perceives us and truly what respect they have.

You see, whatever role you may have in leadership, which every single one of us has at least one area, there are ramifications of how we lead.

God calls out the leaders in chapter 23.  Their decisions have scattered the people like sheep.  They’ve led selfishly and have been opposed to Him.  What God states is accountability for their actions will be happening.  It’s not good.

Every single one of us have people entrusted to our care.  We have lives that He has beautifully given in our circle of influence to either build up or destroy.  Our influence is critical.  Our interactions and reactions speak past our words and tell the true story.  Our relationship with Jesus is the only thing that makes a difference.

And for each of these lives entrusted, we are accountable before God.  Whom has God given to you and how are you leading?

In this chapter, we see God really target the people in positions of leadership among the Jews. As you look back at the history of Israel, when a good and righteous king was on the throne, the people, for the most part, stayed faithful and obedient. When there was an evil king, or in this case, a long string of evil kings in succession to one another, the people perished.

God makes this clear in the previous chapter of Jeremiah 22 when he says, “But a beautiful cedar palace does not make a great king! Your father, Josiah, also had plenty to eat and drink. But he was just and right in all his dealings. That is why God blessed him. He gave justice and help to the poor and needy, and everything went well for him. Isn’t that what it means to know me?” says the Lord.”

I think about what that means for us today, and I think it has a ton of practicality. Scripture tells us in John 15:5, “Yes, I am the vine; you are the branches. Those who remain in me, and I in them, will produce much fruit. For apart from me you can do nothing.”

For believers, we are all leaders in the sense that God has risen us up to be his disciples and filled us with His Holy Spirit. We have been chosen and set apart by him for great works. This is God’s will, that we would bear much fruit! For us to take our leadership for granted, or worse, to become disconnected from the vine, causes not only our own lives to be filled with turmoil, but also those around us who we have been called to minister to.

Let us not be guilty of “deserting them and driving them to destruction…” just as the leaders of Jeremiah’s time did.