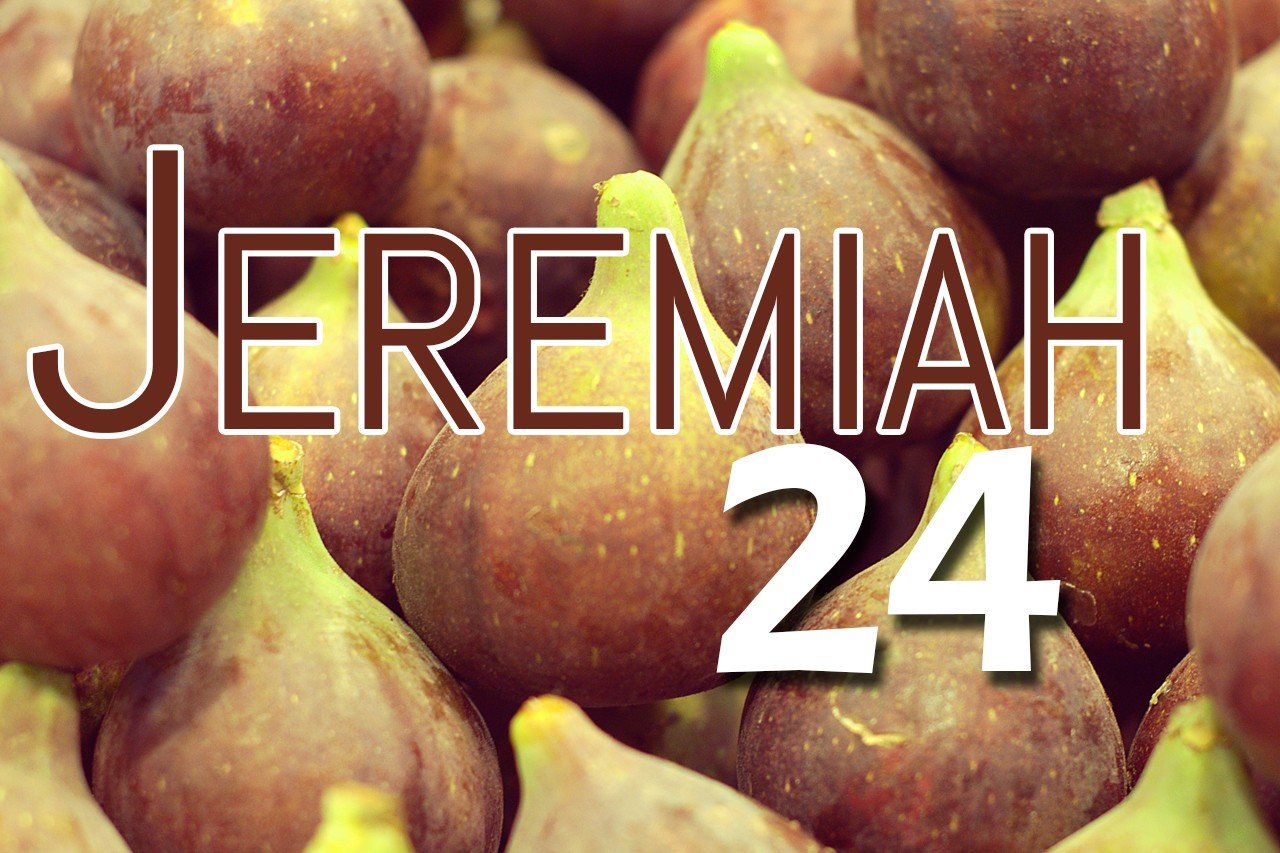 The Good Figs and the Bad Figs

24 After Nebuchadnezzar king of Babylon had taken into exile from Jerusalem Jeconiah the son of Jehoiakim, king of Judah, together with the officials of Judah, the craftsmen, and the metal workers, and had brought them to Babylon, the LORD showed me this vision: behold, two baskets of figs placed before the temple of the LORD. One basket had very good figs, like first-ripe figs, but the other basket had very bad figs, so bad that they could not be eaten. And the LORD said to me, “What do you see, Jeremiah?” I said, “Figs, the good figs very good, and the bad figs very bad, so bad that they cannot be eaten.”

Then the word of the LORD came to me: “Thus says the LORD, the God of Israel: Like these good figs, so I will regard as good the exiles from Judah, whom I have sent away from this place to the land of the Chaldeans. I will set my eyes on them for good, and I will bring them back to this land. I will build them up, and not tear them down; I will plant them, and not pluck them up. I will give them a heart to know that I am the LORD, and they shall be my people and I will be their God, for they shall return to me with their whole heart.

“But thus says the LORD: Like the bad figs that are so bad they cannot be eaten, so will I treat Zedekiah the king of Judah, his officials, the remnant of Jerusalem who remain in this land, and those who dwell in the land of Egypt. I will make them a horror to all the kingdoms of the earth, to be a reproach, a byword, a taunt, and a curse in all the places where I shall drive them. And I will send sword, famine, and pestilence upon them, until they shall be utterly destroyed from the land that I gave to them and their fathers.”

Stirrings from the Holy Spirit do many things.  He convicts of our sin.  He counsels us in times of uncertainty.  It is He who gives peace in the turmoil and chaos that surrounds.  He strengthens us in the face of opposition.  There are many things the Holy Spirit does that I think at times we overlook.  All of these are powerful in their own right.  But one other thing the Holy Spirit does in us is stir a longing for more of God.  He blows upon the embers of our hearts and kindles a fresh desire to go deeper, pursue more, live a life that is beyond what we could do on our own.

We cannot will such a move.  Even all the rituals and duties we may practice each day will do nothing if the Spirit of God is not active in our lives.

“I will give them a heart to know me, that I am the Lord”

What a beautiful statement. A statement that beckons from the throne room of God where His desire for completeness in His people is found taking root in our hearts.  Willing such a depth is something that is birthed within by the Spirit of God working in us.

Consider the burdens you carry at the moment for those who are lost.  I for one am quick to ask for God to do whatever it takes to bring them to Him.  And often He does this through tragedy or a crisis that leads people back.  But this statement alone reveals He must begin the work first within. Maybe we should incorporate such a statement into our prayers that God would stir their hearts toward wanting more.  Yes, they will have to come to an end of themselves.  Yes, often this brings about a wrestling with Him over matters.  But all of this is part of the Holy Spirit’s role in driving people to the Father.

The second thing to consider is simply the state of your own heart.  Are you going through the motions?  Have you lost your passion?  Has the world and your perspective of matters been shifted?  Yes, there are things we can do that possibly would usher in a change but what we need is for the Holy Spirit to stir a longing to go deeper.  This is the critical point.  A point to consider in what you ask and how you move forward.

Plead with God to draw a longing to know Him more.  Ask for Him to work in your heart that softens it to the things of Him.

Oh people, there is so much more than what you are living currently.  There is more beyond of where God wants to lead you.

Captivity has now set in and Jeremiah is once again given a message as to the fate of his people. Essentially, the vision is two baskets of figs – one good and one bad. The good represents the exiles who are sent to Babylon, and the bad represents the king, his officials, all the people in Jerusalem, and those in Egypt.

Then the LORD told me to say to the people, “Listen! I, the LORD, am giving you a choice between the way that leads to life and the way that leads to death. 9 Anyone who stays in the city will be killed in war or by starvation or disease. But those who go out and surrender to the Babylonians, who are now attacking the city, will not be killed; they will at least escape with their life.

I want to cover two points very briefly, The first is, the sheer grace of God to protect those who have been led into captivity. To the world, the captives look to be in worse shape than those in Jerusalem or those that fled to Egypt. To God, however, it will be for their own good as they will one day be brought back to him with “their whole heart.”

‘I will give them a heart to know Me, for I am the LORD; and they will be My people, and I will be their God, for they will return to Me with their whole heart.

This sacrifice by the captives to own up to their sin and face the truth with honesty and integrity mirrors the response of repentance toward The Gospel.

The second theme here is that those who will be punished are the people who tried to take control of their own destiny. The king, the officials, and those who fled (even after being warned) are driven by pride, comfort, and their own agenda. They think they got away with it. They think that they pulled a fast one on God. This response mirrors those today who deny and mock God with seemingly no consequences.

God is not surprised. He will follow through with His promises today just like He did back then. In time, God will show those who turn from Him the folly of their choices. He will restore those who surrendered their lives to captivity.

We must always remember God’s way is the best way. He is always working in the background despite what’s on the surface. True faith says, “I believe in God’s promises even when I can’t see them.” Beware of those who try and pridefully take control of their circumstances by relying on false knowledge and their own selfish comfort. God will not be fooled and He will not be mocked.