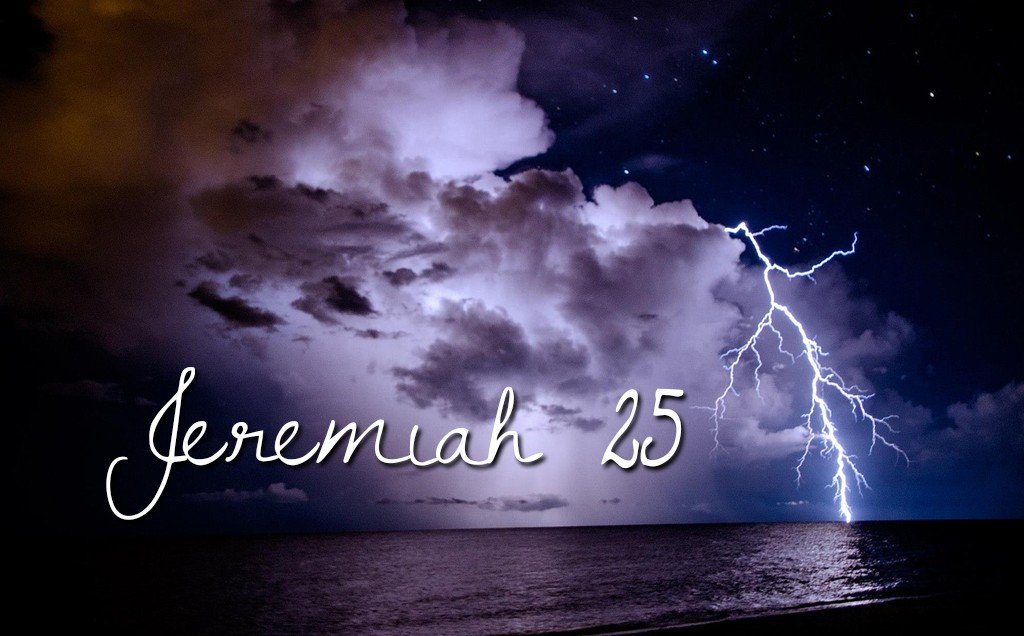 25 The word that came to Jeremiah concerning all the people of Judah, in the fourth year of Jehoiakim the son of Josiah, king of Judah (that was the first year of Nebuchadnezzar king of Babylon), which Jeremiah the prophet spoke to all the people of Judah and all the inhabitants of Jerusalem: “For twenty-three years, from the thirteenth year of Josiah the son of Amon, king of Judah, to this day, the word of the LORD has come to me, and I have spoken persistently to you, but you have not listened. You have neither listened nor inclined your ears to hear, although the LORD persistently sent to you all his servants the prophets, saying, ‘Turn now, every one of you, from his evil way and evil deeds, and dwell upon the land that the LORD has given to you and your fathers from of old and forever. Do not go after other gods to serve and worship them, or provoke me to anger with the work of your hands. Then I will do you no harm.’ Yet you have not listened to me, declares the LORD, that you might provoke me to anger with the work of your hands to your own harm.

“Therefore thus says the LORD of hosts: Because you have not obeyed my words, behold, I will send for all the tribes of the north, declares the LORD, and for Nebuchadnezzar the king of Babylon, my servant, and I will bring them against this land and its inhabitants, and against all these surrounding nations. I will devote them to destruction, and make them a horror, a hissing, and an everlasting desolation. Moreover, I will banish from them the voice of mirth and the voice of gladness, the voice of the bridegroom and the voice of the bride, the grinding of the millstones and the light of the lamp. This whole land shall become a ruin and a waste, and these nations shall serve the king of Babylon seventy years. Then after seventy years are completed, I will punish the king of Babylon and that nation, the land of the Chaldeans, for their iniquity, declares the LORD, making the land an everlasting waste. I will bring upon that land all the words that I have uttered against it, everything written in this book, which Jeremiah prophesied against all the nations. For many nations and great kings shall make slaves even of them, and I will recompense them according to their deeds and the work of their hands.”

The Cup of the Lord’s Wrath

Thus the LORD, the God of Israel, said to me: “Take from my hand this cup of the wine of wrath, and make all the nations to whom I send you drink it. They shall drink and stagger and be crazed because of the sword that I am sending among them.”

“Then you shall say to them, ‘Thus says the LORD of hosts, the God of Israel: Drink, be drunk and vomit, fall and rise no more, because of the sword that I am sending among you.’

“And if they refuse to accept the cup from your hand to drink, then you shall say to them, ‘Thus says the LORD of hosts: You must drink! For behold, I begin to work disaster at the city that is called by my name, and shall you go unpunished? You shall not go unpunished, for I am summoning a sword against all the inhabitants of the earth, declares the LORD of hosts.’

“You, therefore, shall prophesy against them all these words, and say to them:

“‘The LORD will roar from on high,
and from his holy habitation utter his voice;
he will roar mightily against his fold,
and shout, like those who tread grapes,
against all the inhabitants of the earth.
The clamor will resound to the ends of the earth,
for the LORD has an indictment against the nations;
he is entering into judgment with all flesh,
and the wicked he will put to the sword,
declares the LORD.’
“Thus says the LORD of hosts:
Behold, disaster is going forth
from nation to nation,
and a great tempest is stirring
from the farthest parts of the earth!

“And those pierced by the LORD on that day shall extend from one end of the earth to the other. They shall not be lamented, or gathered, or buried; they shall be dung on the surface of the ground.

Imagine speaking the same truth for 25 years and there was no evidence of someone turning from their sinful indifference to God.  Can you fathom how hard that would be?  The words falling on deaf ears, the hearts hardened so much what truth spoken simply bounced off.  Would you continue if the burden was great, the results ineffective?

This was the life of Jeremiah.  He spoke for all these years and saw no repentance.  He saw no one coming back to God.  In fact, he knew what was coming to the people in their obstinate refusal to even consider turning back to God.  They would be dragged off to captivity through pain and sorrow.

It didn’t have to be that way but the people’s choices set their course.

This is often the case for those who refuse to submit to the stirrings of the Holy Spirit.  This is what takes place when a rejection of God in the area of surrender happens.  Unexpected upheaval comes, many times deep sorrow due to our choices are the emotional consequences.  The wreckage of our refusal is evident in brokenness on so many levels.  When we or anyone else does not give into what the Holy Spirit is doing in us, we will find ourselves in pain and sorrow.  Everything disintegrates in our fingers and we are left with nothing, stripped down to the place where we finally or at least hopefully turn back to Him.

Hear this – if you are refusing to surrender to whatever God is convicting you of, leading you toward, it is only going to get worse.  He loves you enough to allow all kinds of hardship come upon you that there is nowhere left to look but to Him.

If you are burdened for a hard-hearted person who deflects anything or any movement of God – take heed.  Jeremiah continued to speak for 25 years and never changed the message.  If God has called you to such a role in an individuals life, stay the course.  Sometimes He relents and that burden is lifted.  Other times, it remains front and center indefinitely.  Whatever the case, it is imperative you stay completely in tune with Him and His voice.  It is vital you stay consistent to the depth of calling He has given you.  Rely on the strength of the Holy Spirit, begging for His wisdom and discernment in the situation and moving when He directs.

You see the reality for Jeremiah’s burden is the people of Israel were lost.  They were separated from God.  And the same is true for the burdens of the non-Believer or indifferent person who are living in rebellion to His calling.  They are lost.  Eternity is in the balance for them.   If God has placed us in such a role of speaking into their lives, nothing should stop our consistency to what He asks even though it’s hard or disappointing.

The warnings of God to the people were constant. Most of these chapters seem to say the same thing over and over again. It’s easy to skim past and overlook it as it often feels like overkill. It’s hard at times to find something that is different.

However, this is what we know with certainty. Jeremiah is a burdened man. He’s in a role with a voice of God he did not choose. God chose him to speak truth against the horrible culture he lived within. God would strengthen him continually as the burden would not subside.

The important part of this burden is the message being given continually to the people. God had a constant message for them, not only through Jeremiah, but other prophets as well. These messages did not cease. As their ears became dull to the words of God, He still had His words of repentance delivered. Their faults were continually made plain as they were asked to turn and repent. But these messages also had a silver lining. They were assured that if they did so, God’s mercies would be enjoyed.

God still is calling us to do the same. He’s still using all things to speak into our lives and challenge us beyond the complacency we’ve fallen into. His Holy Spirit continues to work in our mind and speak to our lives of where God is saying, “Turn back to me.” And much like the audience of Jeremiah, we must ask, have our own ears become dull to the continual call? Have we settled into our own ways?