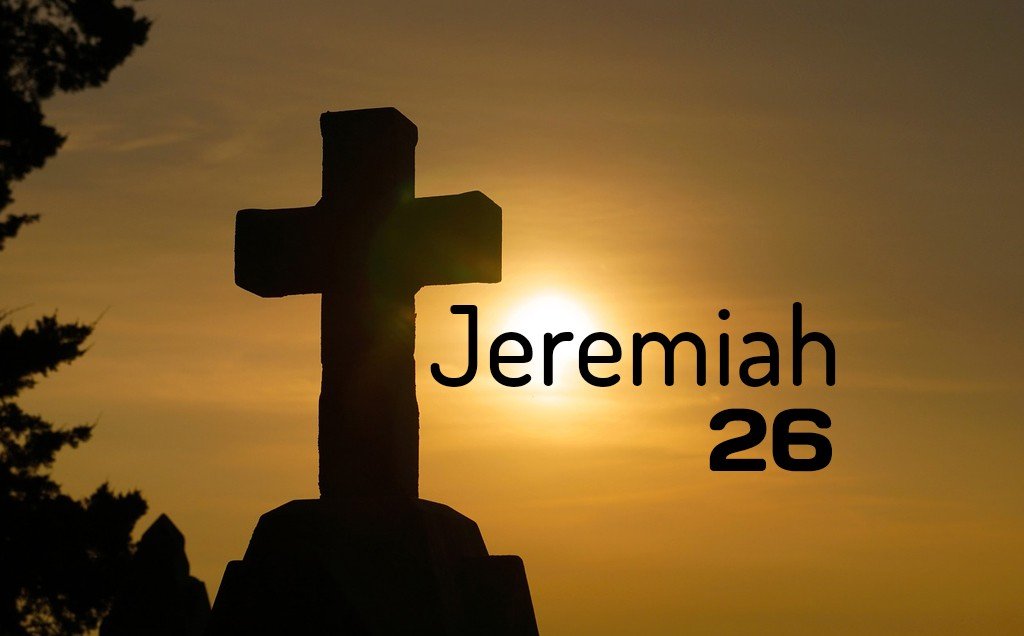 26 In the beginning of the reign of Jehoiakim the son of Josiah, king of Judah, this word came from the LORD: “Thus says the LORD: Stand in the court of the LORD’s house, and speak to all the cities of Judah that come to worship in the house of the LORD all the words that I command you to speak to them; do not hold back a word. It may be they will listen, and every one turn from his evil way, that I may relent of the disaster that I intend to do to them because of their evil deeds. You shall say to them, ‘Thus says the LORD: If you will not listen to me, to walk in my law that I have set before you, and to listen to the words of my servants the prophets whom I send to you urgently, though you have not listened, then I will make this house like Shiloh, and I will make this city a curse for all the nations of the earth.’”

When the officials of Judah heard these things, they came up from the king’s house to the house of the LORD and took their seat in the entry of the New Gate of the house of the LORD. Then the priests and the prophets said to the officials and to all the people, “This man deserves the sentence of death, because he has prophesied against this city, as you have heard with your own ears.”

Then Jeremiah spoke to all the officials and all the people, saying, “The LORD sent me to prophesy against this house and this city all the words you have heard. Now therefore mend your ways and your deeds, and obey the voice of the LORD your God, and the LORD will relent of the disaster that he has pronounced against you. But as for me, behold, I am in your hands. Do with me as seems good and right to you. Only know for certain that if you put me to death, you will bring innocent blood upon yourselves and upon this city and its inhabitants, for in truth the LORD sent me to you to speak all these words in your ears.”

Then the officials and all the people said to the priests and the prophets, “This man does not deserve the sentence of death, for he has spoken to us in the name of the LORD our God.” And certain of the elders of the land arose and spoke to all the assembled people, saying, “Micah of Moresheth prophesied in the days of Hezekiah king of Judah, and said to all the people of Judah: ‘Thus says the LORD of hosts,

“‘Zion shall be plowed as a field;
Jerusalem shall become a heap of ruins,
and the mountain of the house a wooded height.’

Did Hezekiah king of Judah and all Judah put him to death? Did he not fear the LORD and entreat the favor of the LORD, and did not the LORD relent of the disaster that he had pronounced against them? But we are about to bring great disaster upon ourselves.”

There was another man who prophesied in the name of the LORD, Uriah the son of Shemaiah from Kiriath-jearim. He prophesied against this city and against this land in words like those of Jeremiah. And when King Jehoiakim, with all his warriors and all the officials, heard his words, the king sought to put him to death. But when Uriah heard of it, he was afraid and fled and escaped to Egypt. Then King Jehoiakim sent to Egypt certain men, Elnathan the son of Achbor and others with him, and they took Uriah from Egypt and brought him to King Jehoiakim, who struck him down with the sword and dumped his dead body into the burial place of the common people.

But the hand of Ahikam the son of Shaphan was with Jeremiah so that he was not given over to the people to be put to death.

Have you ever been there where through prayer and seeking, God gave you a strong word to deliver to someone?  It may not have been some tremendous warning or even an ultimatum but the intensity of the word mattered because it was truth.  You knew it would be tough to give.  You were tempted to soft-pedal.  There was no doubt that the word to be spoken would possibly turn them away from you.  So, what did you do?

The reality is you have labored over this person.  Your burden has been great.  God has spoken to you and finally said, “Now is the time.”  Because of the prayers and intercession, you are given that platform to speak.  In that moment, sometimes the hardest thing to do then is speak very direct words concerning their spiritual life or behavior. God who has lined up this meeting says, “Do not omit a word.”

I’m sitting on a few of those moments now.  I have wrestled with things concerning a few people.  The burdens have been great.  No in actuality they have been off the charts.  But through this prep time of intercession, I’ve finally been able to get my own emotions out of the way.  I know the conversations are coming.  And although there will be relief of having done everything I can once that opportunity is given, I know I must follow through with what the Lord has directed.  Regardless of the physical outcome, I have one responsibility.  Speak truth and let the chips fall where they will. God’s got this.

But here’s the other aspect to this.  As God has been working in you through the burden and preparing you for the conversation.  He’s doing the same with the other individual. Have you ever thought of that?  Even if these burdens you are bogged down with have gone for months, He’s readying the other individual to hear what needs to be said.  Their hearts will be revealed through truth being spoken.  But their hearts are being prepped for it as well.

When God tells you to speak, do so in confidence that He is working in a far greater way than you can see in the situation.  Do not omit a word.  Do not repress what He’s asked of you to tell.

Jeremiah is threatened with death. My first takeaway from reading this was just how similar it is to Jesus’ encounter with the religious leaders who heard his truth and immediately wanted to kill him. Though both Jeremiah and Jesus were challenged by man, they knew their power came from the Lord. They were confident that no matter what they faced, they would overcome.

We never know who God will rise up to assist us in a time of need. It would have been easy for Jeremiah to cower when faced with this death threat, but he stands firm, even suggesting that they can kill him if they want to. Ahikam son of Shaphan stands up for Jeremiah and persuades them not to kill him. God protected Jeremiah by sending an advocate. Another aspect that is interesting here is the fact that there were some wise men who addressed the crowd and reminded them of their need to repent and turn from their sin.

This is interesting because it seemed from earlier chapters that the people were completely blinded to their own sin. It’s been repeated over and over by Jeremiah and it’s recognized and verbalized by these elders. Seeing the need and actually acting are two very different things, though. In the past, the people of Judah had humbled themselves and turned from their sin. This time they would not. Ultimately, we need to come to grips with the grief that comes from our reluctance to act upon the conviction of God. He gives us every opportunity. He shouts it from the rooftops. In the end, we must follow through with what He’s called of us.