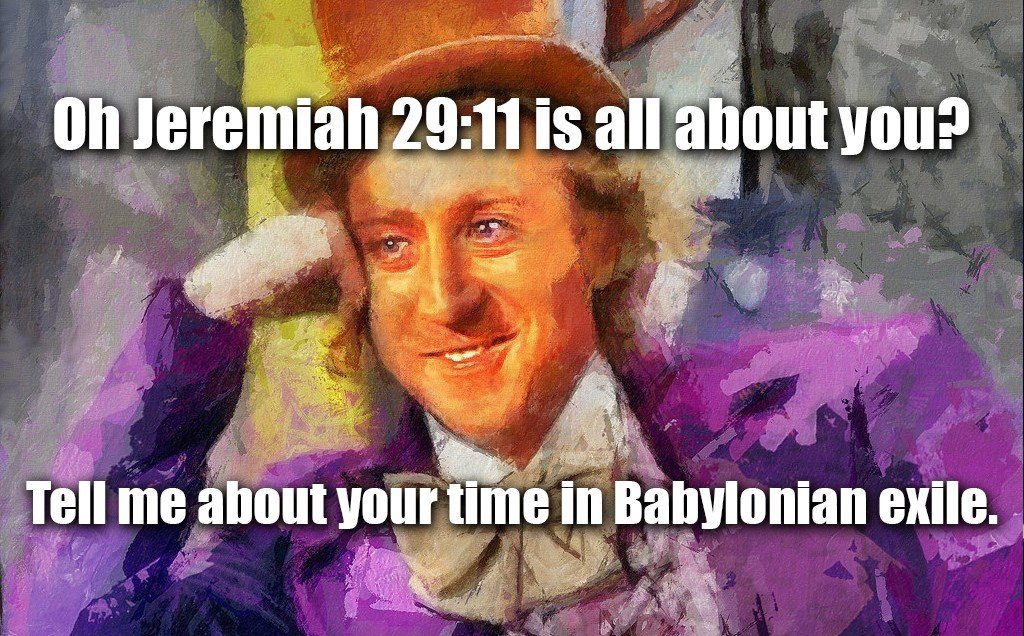 Jeremiah’s Letter to the Exiles

29 These are the words of the letter that Jeremiah the prophet sent from Jerusalem to the surviving elders of the exiles, and to the priests, the prophets, and all the people, whom Nebuchadnezzar had taken into exile from Jerusalem to Babylon. This was after King Jeconiah and the queen mother, the eunuchs, the officials of Judah and Jerusalem, the craftsmen, and the metal workers had departed from Jerusalem. The letter was sent by the hand of Elasah the son of Shaphan and Gemariah the son of Hilkiah, whom Zedekiah king of Judah sent to Babylon to Nebuchadnezzar king of Babylon. It said: “Thus says the LORD of hosts, the God of Israel, to all the exiles whom I have sent into exile from Jerusalem to Babylon: Build houses and live in them; plant gardens and eat their produce. Take wives and have sons and daughters; take wives for your sons, and give your daughters in marriage, that they may bear sons and daughters; multiply there, and do not decrease. But seek the welfare of the city where I have sent you into exile, and pray to the LORD on its behalf, for in its welfare you will find your welfare. For thus says the LORD of hosts, the God of Israel: Do not let your prophets and your diviners who are among you deceive you, and do not listen to the dreams that they dream, for it is a lie that they are prophesying to you in my name; I did not send them, declares the LORD.

“Because you have said, ‘The LORD has raised up prophets for us in Babylon,’ thus says the LORD concerning the king who sits on the throne of David, and concerning all the people who dwell in this city, your kinsmen who did not go out with you into exile: ‘Thus says the LORD of hosts, behold, I am sending on them sword, famine, and pestilence, and I will make them like vile figs that are so rotten they cannot be eaten. I will pursue them with sword, famine, and pestilence, and will make them a horror to all the kingdoms of the earth, to be a curse, a terror, a hissing, and a reproach among all the nations where I have driven them, because they did not pay attention to my words, declares the LORD, that I persistently sent to you by my servants the prophets, but you would not listen, declares the LORD.’ Hear the word of the LORD, all you exiles whom I sent away from Jerusalem to Babylon: ‘Thus says the LORD of hosts, the God of Israel, concerning Ahab the son of Kolaiah and Zedekiah the son of Maaseiah, who are prophesying a lie to you in my name: Behold, I will deliver them into the hand of Nebuchadnezzar king of Babylon, and he shall strike them down before your eyes. Because of them this curse shall be used by all the exiles from Judah in Babylon: “The LORD make you like Zedekiah and Ahab, whom the king of Babylon roasted in the fire,” because they have done an outrageous thing in Israel, they have committed adultery with their neighbors’ wives, and they have spoken in my name lying words that I did not command them. I am the one who knows, and I am witness, declares the LORD.’”

To Shemaiah of Nehelam you shall say: “Thus says the LORD of hosts, the God of Israel: You have sent letters in your name to all the people who are in Jerusalem, and to Zephaniah the son of Maaseiah the priest, and to all the priests, saying, ‘The LORD has made you priest instead of Jehoiada the priest, to have charge in the house of the LORD over every madman who prophesies, to put him in the stocks and neck irons. Now why have you not rebuked Jeremiah of Anathoth who is prophesying to you? For he has sent to us in Babylon, saying, “Your exile will be long; build houses and live in them, and plant gardens and eat their produce.”’”

Zephaniah the priest read this letter in the hearing of Jeremiah the prophet. Then the word of the LORD came to Jeremiah: “Send to all the exiles, saying, ‘Thus says the LORD concerning Shemaiah of Nehelam: Because Shemaiah had prophesied to you when I did not send him, and has made you trust in a lie, therefore thus says the LORD: Behold, I will punish Shemaiah of Nehelam and his descendants. He shall not have anyone living among this people, and he shall not see the good that I will do to my people, declares the LORD, for he has spoken rebellion against the LORD.’”

It was a call to move forward.  Even though in captivity, a place not chosen by their will, it was more than encouragement to embrace where they were. It was a command to have children, settle down, take heed of their surroundings and pray for their captors.

Many times when we find ourselves in a place not of our own choosing, our minds go toward doing everything we can to change the horizon and look toward escape.  We can become so obsessed with the upended life we’re in nothing else matters.  Unfortunately, when we get into such a mindset we miss out on what is going around us.

For as history dictates these words of prophecy would indeed be true.  For 70 years the people would be in captivity in Babylon.  God had orchestrated this.  It was not where they wanted to be or even would have chosen.  But it was where they found themselves due to their sinfulness.  That said, God had a work He would be doing in them.  But they had to embrace everything about where they were and rediscover Him and in time what He would be doing in and through them.

Often when life takes us somewhere we don’t want to be everything grinds to a complete standstill.  Times of trouble and disappoint cannot dictate our perception, although it does more often than not.  Jeremiah’s letter speaks toward adjusting to the current and moving on.  You see, God had plans even in this hiatus of life where discipline was acutely felt by each person.  There was a plan for a new beginning but He had to turn them into people of Him which only the trouble could do.

Do you find yourself in such a place?  What has led you here?  If ‘His eye is on the sparrow” and He knows everything you need does it not make sense that He also knows what is going on with you currently and has a plan?  Now it may be a plan you never chose.  A plan that has brought hardship but as He called the people to settle in and have children, basically go on with life, it makes sense that these same things are happening with us.  His desire through such times is to make Himself the center of it all.

What adjustments need to be made today if you are in such a placement?  What is God attempting to birth in you through the disappointment and hardship?

Context is everything. One of the most misused and misunderstood verses in all the Bible is found here in Jeremiah 29.

‘For I know the plans that I have for you,’ declares the LORD, ‘plans for welfare and not for calamity to give you a future and a hope. 12 ‘Then you will call upon Me and come and pray to Me, and I will listen to you. 13 ‘You will seek Me and find Me when you search for Me with all your heart.

For those of you who have been following along in the Jeremiah series, you know that these words are from Jeremiah to the people of Judah who are now in exile. They are under the rule of the Babylonians because after repeated efforts on God’s part to call them to repentance through Jeremiah, these people refused.

We need to let the context sink in. These people have lost their land, their temple and their city along with being marched hundreds of miles back to Babylon. Jeremiah has told them they must endure 70 years of exile!

Once you study and let this passage sink in, it means much more than just an encouraging word to place on a graduation card. How many of these people do you think will live to see this promise? How hard would it be to know that you must live the rest of your life in exile? What thoughts run through the minds of these people knowing that their land is 70 years away?

With all that being said, God does offer hope. It’s not a superficial hope. It’s not all about happiness. It’s about God’s plan from the beginning that was based on the promise he made to Israel as a nation. It’s about drawing the people to Him and revealing His glory.

Be careful not to be shallow or selfish in your interpretation of Scripture. Yes, there is a tremendous hope to be found in Christ Jesus. Yes, He has an amazing plan for us. However, that plan may look very different than what we have in mind. The hope and future of our lives may involve a period of exile. And many times it’s in those moments where God does his best work!