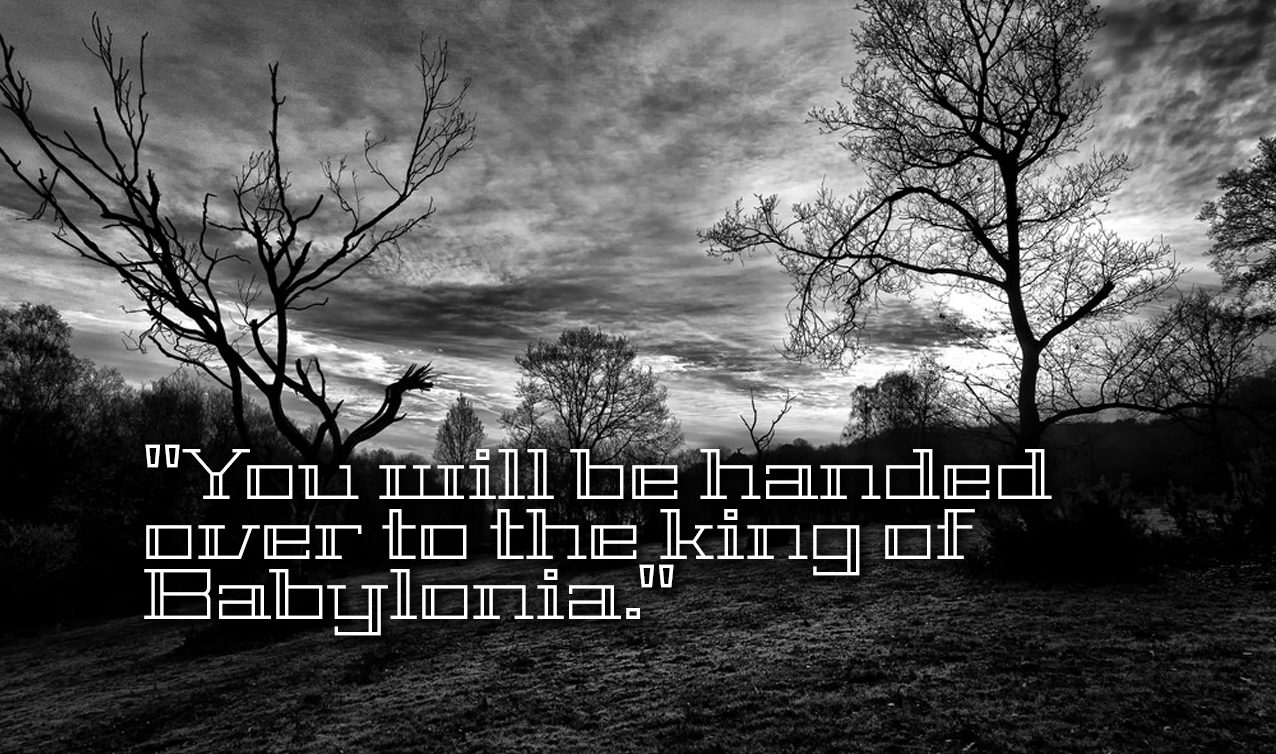 37 Zedekiah the son of Josiah, whom Nebuchadnezzar king of Babylon made king in the land of Judah, reigned instead of Coniah the son of Jehoiakim. But neither he nor his servants nor the people of the land listened to the words of the LORD that he spoke through Jeremiah the prophet.

King Zedekiah sent Jehucal the son of Shelemiah, and Zephaniah the priest, the son of Maaseiah, to Jeremiah the prophet, saying, “Please pray for us to the LORD our God.” Now Jeremiah was still going in and out among the people, for he had not yet been put in prison. The army of Pharaoh had come out of Egypt. And when the Chaldeans who were besieging Jerusalem heard news about them, they withdrew from Jerusalem.

Then the word of the LORD came to Jeremiah the prophet: “Thus says the LORD, God of Israel: Thus shall you say to the king of Judah who sent you to me to inquire of me, ‘Behold, Pharaoh’s army that came to help you is about to return to Egypt, to its own land. And the Chaldeans shall come back and fight against this city. They shall capture it and burn it with fire. Thus says the LORD, Do not deceive yourselves, saying, “The Chaldeans will surely go away from us,” for they will not go away. For even if you should defeat the whole army of Chaldeans who are fighting against you, and there remained of them only wounded men, every man in his tent, they would rise up and burn this city with fire.’”

Now when the Chaldean army had withdrawn from Jerusalem at the approach of Pharaoh’s army, Jeremiah set out from Jerusalem to go to the land of Benjamin to receive his portion there among the people. When he was at the Benjamin Gate, a sentry there named Irijah the son of Shelemiah, son of Hananiah, seized Jeremiah the prophet, saying, “You are deserting to the Chaldeans.” And Jeremiah said, “It is a lie; I am not deserting to the Chaldeans.” But Irijah would not listen to him, and seized Jeremiah and brought him to the officials. And the officials were enraged at Jeremiah, and they beat him and imprisoned him in the house of Jonathan the secretary, for it had been made a prison.

When Jeremiah had come to the dungeon cells and remained there many days, King Zedekiah sent for him and received him. The king questioned him secretly in his house and said, “Is there any word from the LORD?” Jeremiah said, “There is.” Then he said, “You shall be delivered into the hand of the king of Babylon.” Jeremiah also said to King Zedekiah, “What wrong have I done to you or your servants or this people, that you have put me in prison? Where are your prophets who prophesied to you, saying, ‘The king of Babylon will not come against you and against this land’? Now hear, please, O my lord the king: let my humble plea come before you and do not send me back to the house of Jonathan the secretary, lest I die there.” So King Zedekiah gave orders, and they committed Jeremiah to the court of the guard. And a loaf of bread was given him daily from the bakers’ street, until all the bread of the city was gone. So Jeremiah remained in the court of the guard.

Many people want the blessings of God without the personal cost.  They want Him to provide for their needs, give them what they want, help sustain them in the tough times – but when it comes to actually following with their whole heart they disappear.  “Give me the good things but don’t ask anything of me,” is what often is lived out.

This was the case in point of the leadership of Judah.  They didn’t want to listen to the words of rebuke and change God was calling that Jeremiah was giving.  They simply wanted the hardship and turmoil to end.  They wanted the blessing of God without the personal cost.  On many fronts, as they still recognized God (not in whole but in part) they were more content to live in a superficial religion.

The reality was for the messenger, Jeremiah was the object of their frustration again and again.  Just consider all he went through because he spoke rejected truth.  Here alone he’s tossed in prison, which was a tremendous hardship.  The people took out their frustration and unwillingness to follow God and instead came against God’s physical representative.  What’s even more insane is their actions.  Tossed in a jail cell, Jeremiah is only paraded out months later when they sought answers.  Not only were they using God but Jeremiah!

This is the case over and over again today.  First, people want God to provide for them in their selfishness.  When there’s a lack of this, they not only blame Him but come out swinging against His representatives.  When we are trying to do the right thing, people will come out of the woodwork against us.  This leads to the second thought.  In general people want a religion but not a relationship.  The two do not coincide.  All the religion in the world doesn’t change the heart of man.  It is only the relationship, which God calls us toward again and again, which makes a difference.  And that relationship is going to cost you.  It always has and always will.

The reality is we are dissatisfied until we find such a place in relationship.  We may put up a lot of smoke and mirrors as to having one but fruit shows where the commitment lies.  That fruit comes out in the way we treat others, where our trust is as a situation is unresolved and truly in our mindset as to how we approach and interact with God.

2 characters are found in this passage.  First there’s Zedekiah.  His only reliance on God was when he needed something.  Is that you?  If you step back and look at how your life has been playing out, is that what is lived out?  Is this the fruit of your relationship?  Then we have Jeremiah.  Even though he struggled with his calling at times and lamented before God all of which he was asked to do, no matter what hardship was brought against him, he continued in the faith and trust.  It’s remarkable really.  Even if you have those ‘moments’ of despair and hardship, in the end does your faith come back to Jesus?  Are you still seeking and following no matter what?

If you have been following along in Jeremiah you may be confused at how the chapters skip around. I know I am. Thankfully, this chapter jumps back to the main timeline of events (588 BC) when King Neb takes a break from Judah to clean Pharoah’s clock. During this time when Egypt comes to war against Babylon, King Neb places Zedekiah as king over Judah.

As we read along, Jeremiah is falsely imprisoned for treason. He is locked up in a custom-made jail cell. Then, out of nowhere, Zedekiah reaches out to the only man he knows will give him the truth.

Later on King Zedekiah sent for me, and there in the palace he asked me privately, “Is there any message from the LORD?” “There is,” I answered, and added, “You will be handed over to the king of Babylonia.”

Ironic? Zedekiah, as Hank has written, was portrayed as a fairly selfish individual. However, it seems he had several encounters with Jeremiah. Though he desired a revelation from God, he honestly could not come to grips with the reality of what God was asking of him. So, he did his own thing. He trusted that Egypt’s strength over the Word of the Lord. And he paid dearly for it.

Here is the question. How many are in that same boat today? Are you one of them?

There are many people today who are facing struggles that can essentially be grouped into two categories. You are either moving forward in the Word of the Lord or you are compromising by trusting in something or someone of this world. Honestly, it would be much harder for Zedekiah to trust Jeremiah’s word and respond with full submission to God than it would be to simply hope the Egyptians would come through. As we read in this chapter, he did nothing. He choice to do nothing was a vote for the Egyptian army over God.

Submission and obedience is not an easy task. It goes against everything in our flesh. But thanks be to Jesus who empowers us to choose obedience over sin!