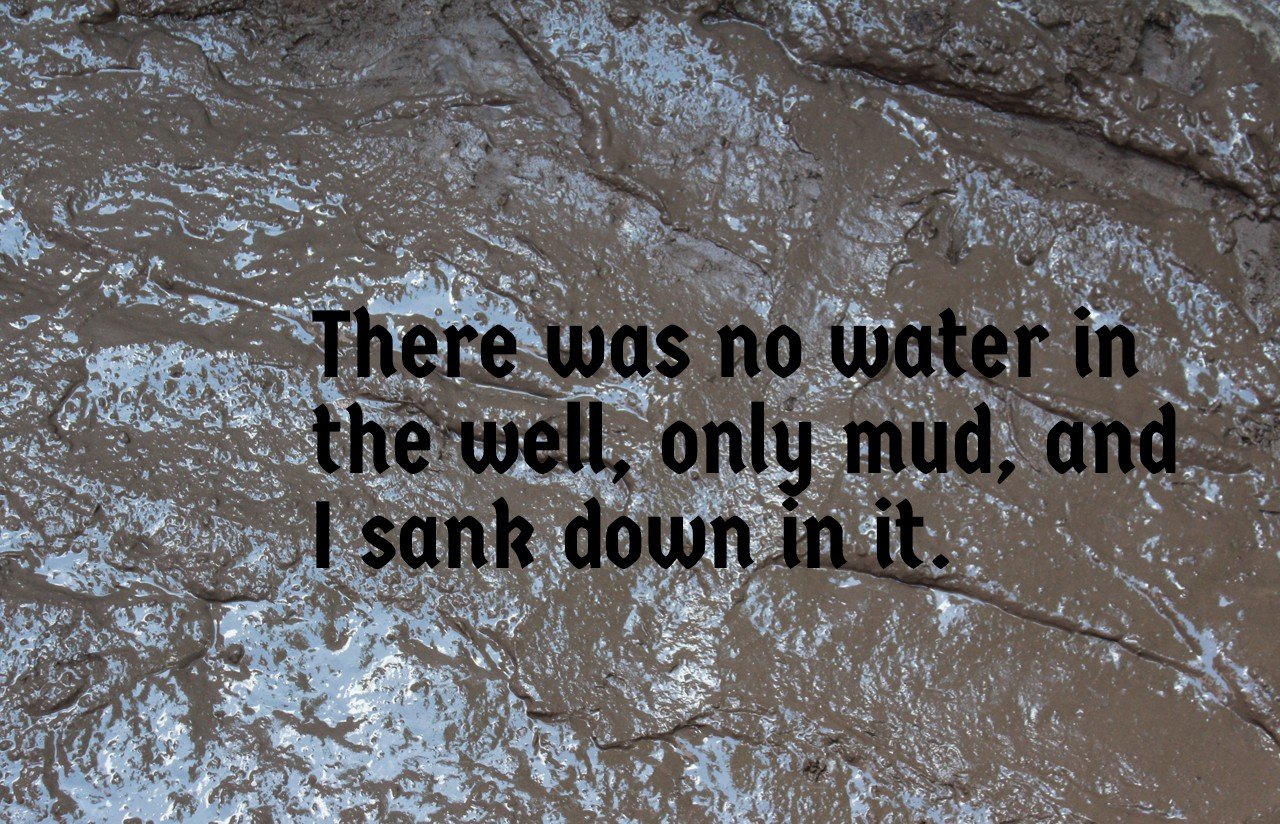 Jeremiah Cast into the Cistern

38 Now Shephatiah the son of Mattan, Gedaliah the son of Pashhur, Jucal the son of Shelemiah, and Pashhur the son of Malchiah heard the words that Jeremiah was saying to all the people: “Thus says the LORD: He who stays in this city shall die by the sword, by famine, and by pestilence, but he who goes out to the Chaldeans shall live. He shall have his life as a prize of war, and live. Thus says the LORD: This city shall surely be given into the hand of the army of the king of Babylon and be taken.” Then the officials said to the king, “Let this man be put to death, for he is weakening the hands of the soldiers who are left in this city, and the hands of all the people, by speaking such words to them. For this man is not seeking the welfare of this people, but their harm.” King Zedekiah said, “Behold, he is in your hands, for the king can do nothing against you.” So they took Jeremiah and cast him into the cistern of Malchiah, the king’s son, which was in the court of the guard, letting Jeremiah down by ropes. And there was no water in the cistern, but only mud, and Jeremiah sank in the mud.

Jeremiah Rescued from the Cistern

King Zedekiah sent for Jeremiah the prophet and received him at the third entrance of the temple of the LORD. The king said to Jeremiah, “I will ask you a question; hide nothing from me.” Jeremiah said to Zedekiah, “If I tell you, will you not surely put me to death? And if I give you counsel, you will not listen to me.” Then King Zedekiah swore secretly to Jeremiah, “As the LORD lives, who made our souls, I will not put you to death or deliver you into the hand of these men who seek your life.”

Then Jeremiah said to Zedekiah, “Thus says the LORD, the God of hosts, the God of Israel: If you will surrender to the officials of the king of Babylon, then your life shall be spared, and this city shall not be burned with fire, and you and your house shall live. But if you do not surrender to the officials of the king of Babylon, then this city shall be given into the hand of the Chaldeans, and they shall burn it with fire, and you shall not escape from their hand.” King Zedekiah said to Jeremiah, “I am afraid of the Judeans who have deserted to the Chaldeans, lest I be handed over to them and they deal cruelly with me.” Jeremiah said, “You shall not be given to them. Obey now the voice of the LORD in what I say to you, and it shall be well with you, and your life shall be spared. But if you refuse to surrender, this is the vision which the LORD has shown to me: Behold, all the women left in the house of the king of Judah were being led out to the officials of the king of Babylon and were saying,

“‘Your trusted friends have deceived you
and prevailed against you;
now that your feet are sunk in the mud,
they turn away from you.’

All your wives and your sons shall be led out to the Chaldeans, and you yourself shall not escape from their hand, but shall be seized by the king of Babylon, and this city shall be burned with fire.”

Then Zedekiah said to Jeremiah, “Let no one know of these words, and you shall not die. If the officials hear that I have spoken with you and come to you and say to you, ‘Tell us what you said to the king and what the king said to you; hide nothing from us and we will not put you to death,’ then you shall say to them, ‘I made a humble plea to the king that he would not send me back to the house of Jonathan to die there.’” Then all the officials came to Jeremiah and asked him, and he answered them as the king had instructed him. So they stopped speaking with him, for the conversation had not been overheard. And Jeremiah remained in the court of the guard until the day that Jerusalem was taken.

It really isn’t shocking when you think about it that Judah was in complete chaos.  King Zedekiah had no backbone and agreed with everyone.  Agreeing with everyone because he lived in fear.  He listened to Jeremiah then tossed him in prison.  He brought Jeremiah before him for counsel and then agreed with everyone who said the prophet should be put to death.  His behavior changed like the wind.  And even though he would rescue Jeremiah by all accounts his fears still drove him as he sought counsel in private making Jeremiah swear that the meeting never took place.

There is no doubt Jeremiah was polarizing.  But often that is the case when truth is spoken.  As we know people would rather have their ears tickled and made to feel good than speak boldness into a situation.  His words were lightning rods again and again as they went completely contrary to the people, the king and in the end affected the morale.  But the morale wasn’t the real problem.  The real problem dealt with sin.  More importantly, the leadership of Zedekiah was so terrible Jeremiah was going against the flow continually.

Jeremiah served as prophet for over 40 years.  He never received encouragement.  He wasn’t loved.  He was marginalized again and again as his popularity was a big fat zero.  He was beat to a pulp, tossed in prison, put in public display in stocks, his life threatened and in time would be forced to leave his home.  And even in his struggle personally with these realities, he still held to what God asked of him.  He wrestled through the issues over and over and still was faithful.  The words and instruction of God burned so much within he could not escape.

Being in ministry often feels like a one way street.  That’s a pretty honest statement.  But we give and give to people, our schedules interrupted through crisis, our hearts become heavy with burdens that are overwhelming.  And that’s just a tip of the iceberg.  For often the case, people only reach out when they are in need or want to complain.  There are definitely those moments of encouragement given but overall the usual situation is the prior.  Don’t let anyone tell you ministry is not hard.  It’s one of the hardest things I’ve been called to.

But it’s times like these, where I may be feeling sorry for myself or burned out or honestly, struggling through depression that the life of Jeremiah is encouraging.  God never promised any of our following would be easy.  He never said we would not be persecuted, in fact far from that actually.  I think as well when you step into the mire of sin that people are so engrossed in, it’s far easier to give way to negative thoughts than the hope Jesus has put in us as His followers.  Through all of Jeremiah’s hardships, through his honesty of struggle, God would hear what He had to say, meet him in that place and lead Him forward and out.  You see, the mission never changed.

And neither does yours.  God may not promise an easy life with whatever you’re facing right now, but He does promise His strength.

Blessed be the God and Father of our Lord Jesus Christ, the Father of mercies and God of all comfort, 4 who comforts us in all our affliction so that we will be able to comfort those who are in any affliction with the comfort with which we ourselves are comforted by God. 5 For just as the sufferings of Christ are ours in abundance, so also our comfort is abundant through Christ. 6 But if we are afflicted, it is for your comfort and salvation; or if we are comforted, it is for your comfort, which is effective in the patient enduring of the same sufferings which we also suffer; 7 and our hope for you is firmly grounded, knowing that as you are sharers of our sufferings, so also you are sharers of our comfort.

In the end remember, what God has called you to is not for human accolade or approval.  It is for His glory.  Lean into Him in these times of hardship and doubt.  Rest in His word.  For let me tell you, you cannot escape the calling of God on your life.  Stay attuned and rely on the strength on the Holy Spirit can give you no matter what comes.

The brutality against Jeremiah is taken a step further. Led by officials, they inquired with the king for permission to do what they had planned. Zedekiah gave the approval to cast him into a cistern where there was no water. His body sunk deep into the mud.

It reminds me that sometimes things go from bad to worse. We’ve all been in a place where something went wrong and catastrophe continues to pile up. With each situation, we sink deeper into the mud. It feels as though there’s nothing to get our footing secure. Where is the rescue? Where is the chance for this to turn around? Where in the world is God in all this mess?

For Jeremiah, it would come from an unlikely individual. An Ethiopian who observed everything and was concerned for the prophet steps up. Particularly ironic is that he was not a Jew or even someone remotely connected to the ways of God. Seeking permission, he took 30 men and tied old clothing together to secure the rescue. Jeremiah would live in the court of the guardhouse until Jerusalem was captured.

The rescues of God come in so many different ways. Sometimes He will stir the heart of the most unlikely individual to be part of our rescue. It’s hard to fathom why God would allow this to take place to Jeremiah. No one likes to suffer. But God in His faithfulness brought him back to freedom in His timing.

We can speculate as to why this Ethiopian man was so motivated to rescue Jeremiah. We know nothing about him but it seems likely that he knew something about the prophet. Maybe he had watched and listened while observing his faithful word? Maybe he saw how unbelievably committed Jeremiah was to his God? What are others gathering of you in your pit of despair?

Much like this Ethiopian man, Jesus came into the pit with us in order to rescue our souls from sin. He not only rescued us but died in our place, choosing to stay in the pit and face the punishment we deserved while we walked free. How does His sacrifice change your perspective today?