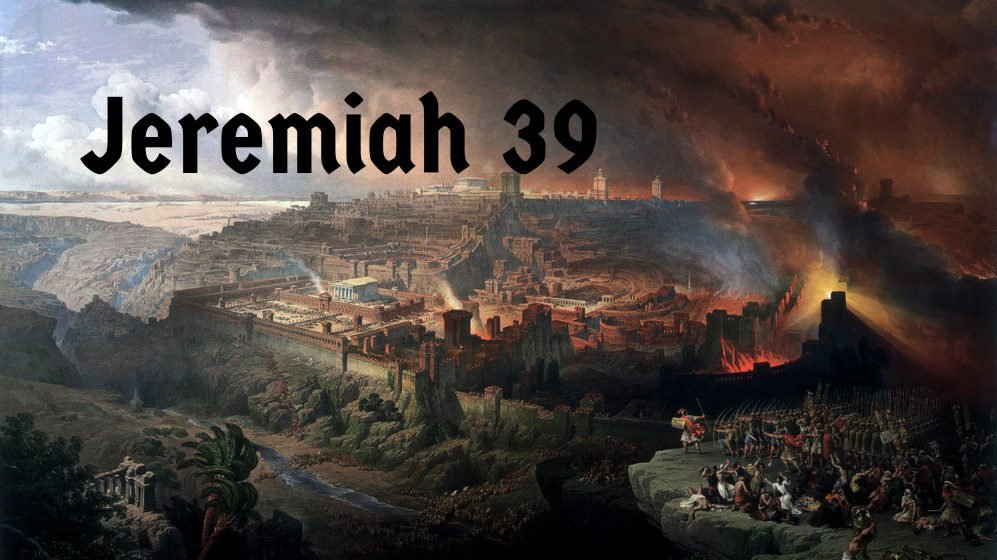 The Fall of Jerusalem

39 In the ninth year of Zedekiah king of Judah, in the tenth month, Nebuchadnezzar king of Babylon and all his army came against Jerusalem and besieged it. In the eleventh year of Zedekiah, in the fourth month, on the ninth day of the month, a breach was made in the city. Then all the officials of the king of Babylon came and sat in the middle gate: Nergal-sar-ezer of Samgar, Nebu-sar-sekim the Rab-saris, Nergal-sar-ezer the Rab-mag, with all the rest of the officers of the king of Babylon. When Zedekiah king of Judah and all the soldiers saw them, they fled, going out of the city at night by way of the king’s garden through the gate between the two walls; and they went toward the Arabah. But the army of the Chaldeans pursued them and overtook Zedekiah in the plains of Jericho. And when they had taken him, they brought him up to Nebuchadnezzar king of Babylon, at Riblah, in the land of Hamath; and he passed sentence on him. The king of Babylon slaughtered the sons of Zedekiah at Riblah before his eyes, and the king of Babylon slaughtered all the nobles of Judah. He put out the eyes of Zedekiah and bound him in chains to take him to Babylon. The Chaldeans burned the king’s house and the house of the people, and broke down the walls of Jerusalem. Then Nebuzaradan, the captain of the guard, carried into exile to Babylon the rest of the people who were left in the city, those who had deserted to him, and the people who remained. Nebuzaradan, the captain of the guard, left in the land of Judah some of the poor people who owned nothing, and gave them vineyards and fields at the same time.

Nebuchadnezzar king of Babylon gave command concerning Jeremiah through Nebuzaradan, the captain of the guard, saying, “Take him, look after him well, and do him no harm, but deal with him as he tells you.” So Nebuzaradan the captain of the guard, Nebushazban the Rab-saris, Nergal-sar-ezer the Rab-mag, and all the chief officers of the king of Babylon sent and took Jeremiah from the court of the guard. They entrusted him to Gedaliah the son of Ahikam, son of Shaphan, that he should take him home. So he lived among the people.

The word of the LORD came to Jeremiah while he was shut up in the court of the guard: “Go, and say to Ebed-melech the Ethiopian, ‘Thus says the LORD of hosts, the God of Israel: Behold, I will fulfill my words against this city for harm and not for good, and they shall be accomplished before you on that day. But I will deliver you on that day, declares the LORD, and you shall not be given into the hand of the men of whom you are afraid. For I will surely save you, and you shall not fall by the sword, but you shall have your life as a prize of war, because you have put your trust in me, declares the LORD.’”

God’s Word came true.  The final king of Judah finally was removed from his throne.  Everything Jeremiah spoke came to pass at the Lord’s command.  Captured, his sons killed before his eyes then blinded was the last vision he had to live with as he had lived in complete rebellion to God.

Rebellion does that.  There comes a point for all who live in rebellion to what God says and is doing has a price.  Although Zedekiah’s life would be lived out in blindness as he was captured and hauled off to captivity, the truth of his choices would be played over and over in his mind.  We have no record that Zedekiah ever turned his life around.

Jeremiah, who was given such a tough role of speaking what was to come would be spared.  In fact, through the Babylonian victory of capturing, Jerusalem would be put under the enemies protection.

There is no doubt that the tentacles of rebellion have a price.  In the end, God has the last word.  If our lives are dictated by fear which leads way to rebellion toward what God is asking, there will not be a good end of the story.  If our lives are unsure but we are obedient, even in the hardest things God asks of us, He will remain faithful as we trust Him.

After 2 ½ years of the people watching and wondering when the Babylonian army would penetrate their city, it finally happened.  Jerusalem was taken captive.  King Zedekiah, who had been told by Jeremiah to surrender, did the opposite.  He ran.  Overtaken, just as Jeremiah predicted, his suffering was monumental.  He watched his sons be killed and then was blinded and carted off to captivity to end his days in a horrific humiliation.  The last thing his human eyes watched was the death of his children.  Had he listened and heeded the Word of God, things certainly would have been different.

Jerusalem burned. The captain of the Babylonian army took the rest of the people into custody with the exception of the poor and Jeremiah himself.

It was a unique mercy given to Jeremiah.  Found with favor by this pagan commander, he was released from prison and put under the new governor of the city.  God rewarded Jeremiah’s faithfulness and would also keep His voice among the remaining few of the city.  Interestingly, the Ethiopian who had stepped in to help Jeremiah was also spared.

I will keep you safe, and you will not be put to death. You will escape with your life because you have put your trust in me. I, the LORD, have spoken.”

The takeaway is just how God rewards the faithful. Living in such tumultuous times, God had marked Jeremiah for purpose.  It was a marking he didn’t want but also could not escape. The heavy hand of God pressed in upon him.  As a lone voice most of the time, Jeremiah proclaimed the Word of God despite the hardship he endured because of it. Through this faithfulness, God redeemed others, like the Ethiopian man. All was not lost. There was fruit coming forth from Jeremiah’s faithfulness.