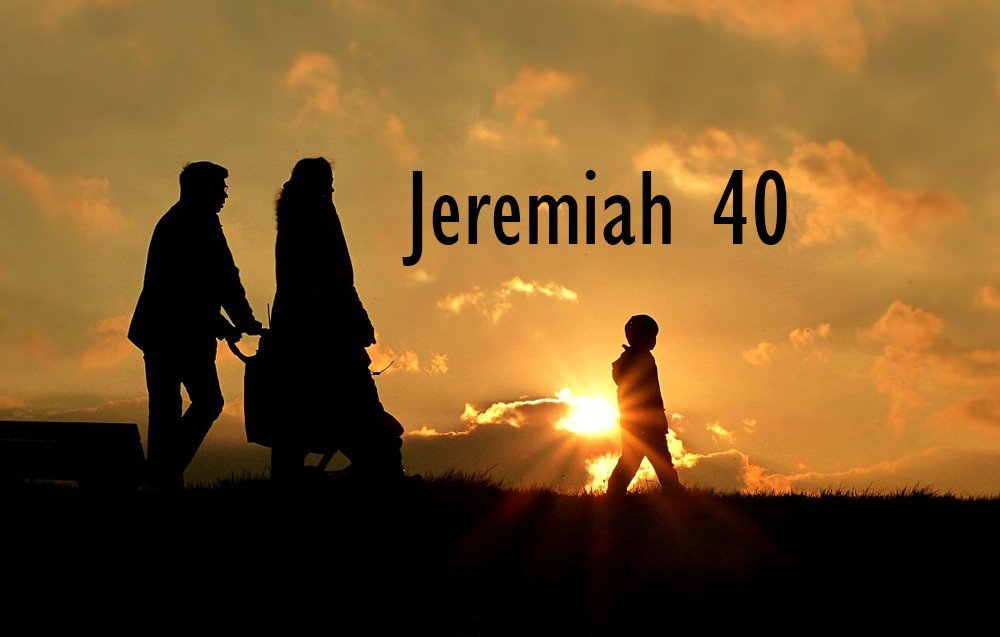 40 The word that came to Jeremiah from the LORD after Nebuzaradan the captain of the guard had let him go from Ramah, when he took him bound in chains along with all the captives of Jerusalem and Judah who were being exiled to Babylon. The captain of the guard took Jeremiah and said to him, “The LORD your God pronounced this disaster against this place. The LORD has brought it about, and has done as he said. Because you sinned against the LORD and did not obey his voice, this thing has come upon you. Now, behold, I release you today from the chains on your hands. If it seems good to you to come with me to Babylon, come, and I will look after you well, but if it seems wrong to you to come with me to Babylon, do not come. See, the whole land is before you; go wherever you think it good and right to go. If you remain, then return to Gedaliah the son of Ahikam, son of Shaphan, whom the king of Babylon appointed governor of the cities of Judah, and dwell with him among the people. Or go wherever you think it right to go.” So the captain of the guard gave him an allowance of food and a present, and let him go. Then Jeremiah went to Gedaliah the son of Ahikam, at Mizpah, and lived with him among the people who were left in the land.

When all the captains of the forces in the open country and their men heard that the king of Babylon had appointed Gedaliah the son of Ahikam governor in the land and had committed to him men, women, and children, those of the poorest of the land who had not been taken into exile to Babylon, they went to Gedaliah at Mizpah—Ishmael the son of Nethaniah, Johanan the son of Kareah, Seraiah the son of Tanhumeth, the sons of Ephai the Netophathite, Jezaniah the son of the Maacathite, they and their men. Gedaliah the son of Ahikam, son of Shaphan, swore to them and their men, saying, “Do not be afraid to serve the Chaldeans. Dwell in the land and serve the king of Babylon, and it shall be well with you. As for me, I will dwell at Mizpah, to represent you before the Chaldeans who will come to us. But as for you, gather wine and summer fruits and oil, and store them in your vessels, and dwell in your cities that you have taken.” Likewise, when all the Judeans who were in Moab and among the Ammonites and in Edom and in other lands heard that the king of Babylon had left a remnant in Judah and had appointed Gedaliah the son of Ahikam, son of Shaphan, as governor over them, then all the Judeans returned from all the places to which they had been driven and came to the land of Judah, to Gedaliah at Mizpah. And they gathered wine and summer fruits in great abundance.

There are times with people they acknowledge the presence and hand of God.  This is found in those who have witnessed His provision and protection of someone or in a certain situation.  This is found when God miraculously shows up and does the unexpected.  But even though they may recognize these things, it doesn’t mean it changes them or their trust in Him.

The Babylonian commander didn’t know God.  Was not attune to Him.  Yet he stated God had given them victory.  But this didn’t change one thing for him.  He didn’t accept him personally.  He wasn’t drawn to Him even though the miracle.

This type of behavior is everywhere.  People will believe in a “higher power”.  They will admit that God is real.  But in the end, they won’t go deeper beyond such words.  The point is our knowing of God is more than knowledge or statements.  What has been evident throughout all of Scripture and the longing of Jesus’ heart is for a personal relationship.  That’s the real difference to any of these thoughts.  We are called to know Him personally and hold such a relationship with Him.  Just knowing of Him, believing He is good is not enough.

We find Jeremiah here being permitted to go and live anywhere he wants. It was a great reward for him, and evidence of the favor of God. This pagan officer has surely witnessed a lot of the character traits of Jeremiah and he allows him to leave and go wherever he desires.

At the end of this chapter, we see an intriguing twist, as Gedaliah assumes governor over Judah’s land. He is told by the commander Jonathon of the Hebrew forces that there is a threat of his assassination. We don’t see it in this chapter, but a large string of events are about to occur that will put Judah further into trouble.

I love that we finally get to read about some positive aspects to Jeremiah’s ministry! Ironically, it’s not taking place within the company of his own people, but rather, pagans! The people Jeremiah should have been afraid of, God granted favor with, and the people who were supposed to be listening to him were hostile and closed off.

God knew from the beginning that Jeremiah would be his guy. At certain times in our lives, we need the encouragement and care that is given to Jeremiah in this chapter. It’s a great example of how God is sovereign over all things, and how when we think it will go one way, many times, it ends up going a different direction.

But God is always faithful.