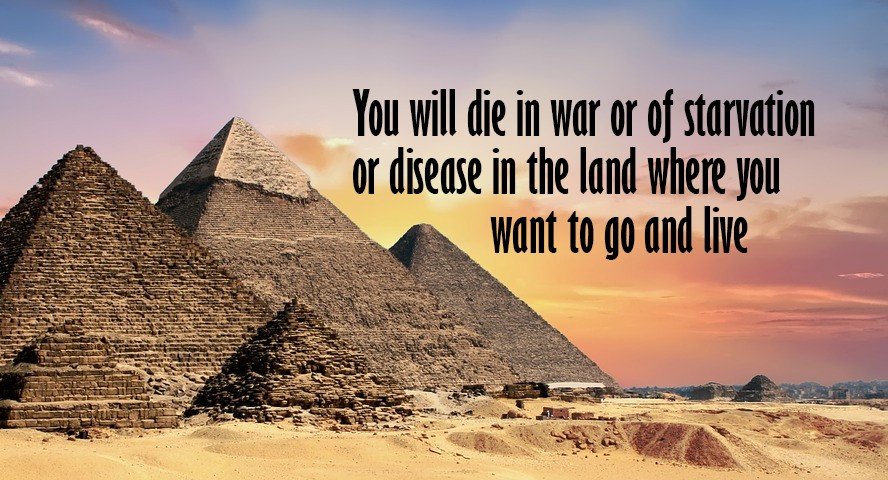 Warning Against Going to Egypt

42 Then all the commanders of the forces, and Johanan the son of Kareah and Jezaniah the son of Hoshaiah, and all the people from the least to the greatest, came near and said to Jeremiah the prophet, “Let our plea for mercy come before you, and pray to the LORD your God for us, for all this remnant—because we are left with but a few, as your eyes see us—that the LORD your God may show us the way we should go, and the thing that we should do.” Jeremiah the prophet said to them, “I have heard you. Behold, I will pray to the LORD your God according to your request, and whatever the LORD answers you I will tell you. I will keep nothing back from you.” Then they said to Jeremiah, “May the LORD be a true and faithful witness against us if we do not act according to all the word with which the LORD your God sends you to us. Whether it is good or bad, we will obey the voice of the LORD our God to whom we are sending you, that it may be well with us when we obey the voice of the LORD our God.”

At the end of ten days the word of the LORD came to Jeremiah. Then he summoned Johanan the son of Kareah and all the commanders of the forces who were with him, and all the people from the least to the greatest, and said to them, “Thus says the LORD, the God of Israel, to whom you sent me to present your plea for mercy before him: If you will remain in this land, then I will build you up and not pull you down; I will plant you, and not pluck you up; for I relent of the disaster that I did to you. Do not fear the king of Babylon, of whom you are afraid. Do not fear him, declares the LORD, for I am with you, to save you and to deliver you from his hand. I will grant you mercy, that he may have mercy on you and let you remain in your own land. But if you say, ‘We will not remain in this land,’ disobeying the voice of the LORD your God and saying, ‘No, we will go to the land of Egypt, where we shall not see war or hear the sound of the trumpet or be hungry for bread, and we will dwell there,’ then hear the word of the LORD, O remnant of Judah. Thus says the LORD of hosts, the God of Israel: If you set your faces to enter Egypt and go to live there, then the sword that you fear shall overtake you there in the land of Egypt, and the famine of which you are afraid shall follow close after you to Egypt, and there you shall die. All the men who set their faces to go to Egypt to live there shall die by the sword, by famine, and by pestilence. They shall have no remnant or survivor from the disaster that I will bring upon them.

“For thus says the LORD of hosts, the God of Israel: As my anger and my wrath were poured out on the inhabitants of Jerusalem, so my wrath will be poured out on you when you go to Egypt. You shall become an execration, a horror, a curse, and a taunt. You shall see this place no more. The LORD has said to you, O remnant of Judah, ‘Do not go to Egypt.’ Know for a certainty that I have warned you this day that you have gone astray at the cost of your lives. For you sent me to the LORD your God, saying, ‘Pray for us to the LORD our God, and whatever the LORD our God says, declare to us and we will do it.’ And I have this day declared it to you, but you have not obeyed the voice of the LORD your God in anything that he sent me to tell you. Now therefore know for a certainty that you shall die by the sword, by famine, and by pestilence in the place where you desire to go to live.”

“God will restore but you must be obedient.” -Jeremiah

As the story continues, the men and people of Judah sought out Jeremiah.  They were in desperation for favor from God.  They were feeling the affliction as their numbers had been seriously reduced. “Pray for us” was their first request. “We will do whatever God asks…” was the second statement.

What we will see is they wanted the prayers but were unwilling to do what God said.  This is revealed in the next chapter.

But for 10 days Jeremiah sought God’s insight.  He looked for His words to come and when they did it was a call to obedience.  Always seems to be that way!  God was specific in His desire to see them gain a fresh perspective even though driven by fear.  They also had worked in their own thinking far too long and needed to do exactly what God was asking.

These thoughts bring several takeaways.  First, don’t ask for God’s guidance if you have no intention of following what He says.  We can be all about seeking prayer, asking others to do so for us, but if we don’t have any inclination to do exactly what He says, it’s wasted words.  That’s strong but true.  For often, what God asks is far beyond what we imagine.  More on point if you’ve been in this situation before, you know God often asks things of us we would not want to do.  This is part of the forging of our faith and trust in Him.  This is part of our bending into His will for whatever we are seeking guidance on.

The second thing to consider is God deeply desires reconciliation on all levels within His people.  Yes, there’s the reconciliation between people at times He wants to be made right.  But He ultimately desires we are reconciled to Him.  That reconciliation comes through our own obedience to whatever it is He’s asking.  Restoration of things broken or damage is hard work.  We’ve all had times in our lives where this has rung true.  But many times, such restoration is costly to us personally.

That personal aspect is where the rub comes.  For as we all have our own ideas and opinions on how something should go, those mean nothing when it comes to the bigger picture of God.  God who knows every heart, knows His plans for each, often takes a path not expected and met with doing the right thing when it’s hard.  Again, this is where our faith is forged.  This is where trust is tangibly shown in how we respond.

In the end, God desires so greatly to restore.  But in the end we must be obedient to what He is directing.  Take yourself out of whatever equation you’re wrestling through.  What is He saying?  Where is He directing?  There is no other way than obedience of which when we make the decision to do so, He will empower us with His Spirit to take the steps and actions.

Bias. We all have it. There is a lot to be said in this chapter about predetermined thoughts. Johanan wants to flee to Egypt, but he seeks counsel from Jeremiah first. They ask for Jeremiah to pray to God for an answer. This was a wise move. In fact, the leaders along with Johanan go on to make a bold statement of personal accountability.

Whether it pleases us or not, we will obey the LORD our God, to whom we are asking you to pray. All will go well with us if we obey him.”

However, it seems even though he asked for Jeremiah’s (and ultimately the Lord’s) counsel, he predetermined that he was not going to obey it unless it was exactly what he wanted to hear.

We do this sort of thing all the time. We have a preset way we believe things should go. We set limiting factors on the timing and circumstances of such events. And when a Word comes to us, even from someone like Jeremiah, it’s not what we want to hear.

The danger for Johanan and all the people who follow him is great. God has warned that Egypt will be destroyed if they go there. On the surface, it seems like the safe move. It was a place where there were no wars going on. It was a place they could live comfortably. Again, just like we’ve seen for this entire book, the people of Judah refused to face their pride issues.

I’m sure Johanan does not want to go back and face the humility of being governed by the Babylonians even as God has promised to restore them. And the peace over in Egypt is too enticing. He trusts in his own thoughts and ways instead of following the Lord’s.

Where does this strike your heart today? Are you hardened to the truth of where God is asking you to go? Are you predetermining your thoughts, or refusing to deal with your pride?