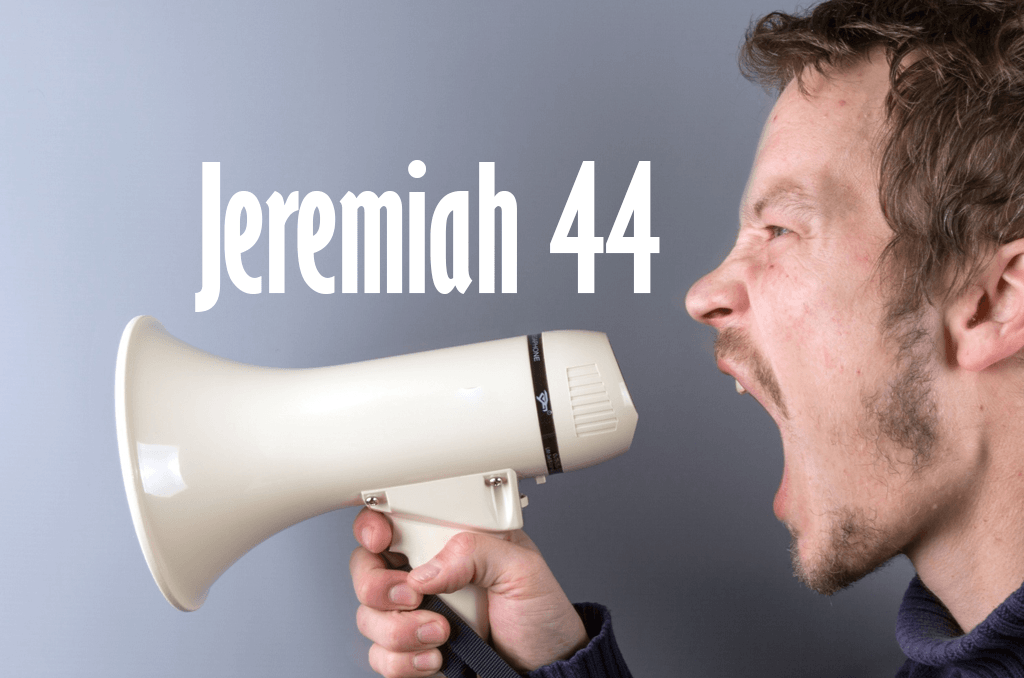 44 The word that came to Jeremiah concerning all the Judeans who lived in the land of Egypt, at Migdol, at Tahpanhes, at Memphis, and in the land of Pathros, “Thus says the LORD of hosts, the God of Israel: You have seen all the disaster that I brought upon Jerusalem and upon all the cities of Judah. Behold, this day they are a desolation, and no one dwells in them, because of the evil that they committed, provoking me to anger, in that they went to make offerings and serve other gods that they knew not, neither they, nor you, nor your fathers. Yet I persistently sent to you all my servants the prophets, saying, ‘Oh, do not do this abomination that I hate!’ But they did not listen or incline their ear, to turn from their evil and make no offerings to other gods. Therefore my wrath and my anger were poured out and kindled in the cities of Judah and in the streets of Jerusalem, and they became a waste and a desolation, as at this day. And now thus says the LORD God of hosts, the God of Israel: Why do you commit this great evil against yourselves, to cut off from you man and woman, infant and child, from the midst of Judah, leaving you no remnant? Why do you provoke me to anger with the works of your hands, making offerings to other gods in the land of Egypt where you have come to live, so that you may be cut off and become a curse and a taunt among all the nations of the earth? Have you forgotten the evil of your fathers, the evil of the kings of Judah, the evil of their wives, your own evil, and the evil of your wives, which they committed in the land of Judah and in the streets of Jerusalem? They have not humbled themselves even to this day, nor have they feared, nor walked in my law and my statutes that I set before you and before your fathers.

Then Jeremiah said to all the people, men and women, all the people who had given him this answer: “As for the offerings that you offered in the cities of Judah and in the streets of Jerusalem, you and your fathers, your kings and your officials, and the people of the land, did not the LORD remember them? Did it not come into his mind? The LORD could no longer bear your evil deeds and the abominations that you committed. Therefore your land has become a desolation and a waste and a curse, without inhabitant, as it is this day. It is because you made offerings and because you sinned against the LORD and did not obey the voice of the LORD or walk in his law and in his statutes and in his testimonies that this disaster has happened to you, as at this day.”

Jeremiah said to all the people and all the women, “Hear the word of the LORD, all you of Judah who are in the land of Egypt. Thus says the LORD of hosts, the God of Israel: You and your wives have declared with your mouths, and have fulfilled it with your hands, saying, ‘We will surely perform our vows that we have made, to make offerings to the queen of heaven and to pour out drink offerings to her.’ Then confirm your vows and perform your vows! Therefore hear the word of the LORD, all you of Judah who dwell in the land of Egypt: Behold, I have sworn by my great name, says the LORD, that my name shall no more be invoked by the mouth of any man of Judah in all the land of Egypt, saying, ‘As the Lord GOD lives.’ Behold, I am watching over them for disaster and not for good. All the men of Judah who are in the land of Egypt shall be consumed by the sword and by famine, until there is an end of them. And those who escape the sword shall return from the land of Egypt to the land of Judah, few in number; and all the remnant of Judah, who came to the land of Egypt to live, shall know whose word will stand, mine or theirs. This shall be the sign to you, declares the LORD, that I will punish you in this place, in order that you may know that my words will surely stand against you for harm: Thus says the LORD, Behold, I will give Pharaoh Hophra king of Egypt into the hand of his enemies and into the hand of those who seek his life, as I gave Zedekiah king of Judah into the hand of Nebuchadnezzar king of Babylon, who was his enemy and sought his life.”

“Those who cannot remember the past are condemned to repeat it.”

The unraveling of the heart is front and center of the people of Judah.  They have belligerently chosen to do what they wanted.  They chose not to listen to the Word of God.  They marginalized Jeremiah’s instruction.  They went directly against God’s commands on every level and here they now find themselves back in Egypt.  Egypt – where they had been delivered centuries before.  Egypt – where they ‘remembered’ how things used to be with skewed vision.  Egypt – where they were directly out of the will of God.

And what is so surprising is their own response to Jeremiah’s strong words of what is coming.  They had flat out embraced false worship, made reasons for doing so and had no intention of changing their ways.  “We will not listen to your message…” they said.  Refusing to learn any lessons from the destruction that led them there even, they dug their feet in, hardened their heart and with self-determination proclaimed they would do what they want.

And they would.  And God would let them.  And they would die in their sins.  Only a small remnant of people would survive.

It’s a given we all make mistakes.  It’s true to form we pay for them on some level.  The question is do we learn from them?  And here is indeed the problem.  As the love in our hearts unravel toward the ways of God, He lets us go.  He lets us have our way.  But do these things in the end drive us back toward Him or harden our hearts more because of it?

It’s one thing to recognize the mistakes we’ve made.  It’s quite another to make choices to change.  It’s a whole other arena as to if we are repentant or merely regretful.  Regretful does nothing.  Repentance is everything.

Are you standing in the wreckage currently of poor choices in the past?  Are you living with the ramifications of your own sin?  What has this done to your heart?  That is the question.  The men and women of Judah absolutely refused to learn from their past and were doomed to repeat them.  The same is true for us.

Until we in genuine repentance come before God, nothing will ever change.  In fact, we will make the same mistakes we have usually with further ramifications of what that means.  Meaning, your future is at stake on the matter.  And so are the lives who have been entrusted to you.

Once again the people of Judah have hardened their hearts to God. It’s unreal. To be honest, this is such a hard chapter to read because Jeremiah stands here confronting them as a prophet who has successfully predicted every event that has just taken place before their eyes. Yet, they still refuse to believe him.

Do you see yourself in this passage? What is even more unbelievable than the hardened hearts of these people is the fact that God would choose to willingly send his Son to the cross in order to wash them clean. Yes, this is not an easy chapter to read, and yes, it is a display of the wrath of God. But keep in mind, He chose to also save people with this same mentality once and for all through Jesus Christ.

Would you send your son to die for these people of Judah? I certainly wouldn’t. It’s horrifying. Yet, I believe the gravity of this great act is felt even more when you read chapters like this which illustrate the depravity of man.

In order to understand our need to repent, we must understand the gravity of our sin. This chapter really displays what we are capable of when we follow our own desires. I can’t help but think of Romans when Paul says, “God demonstrates his own love by this: while we were still sinners, Christ died for us.”

After looking at this chapter, it could be said that while the people of Judah were turning our backs in Egypt, Christ died for them.