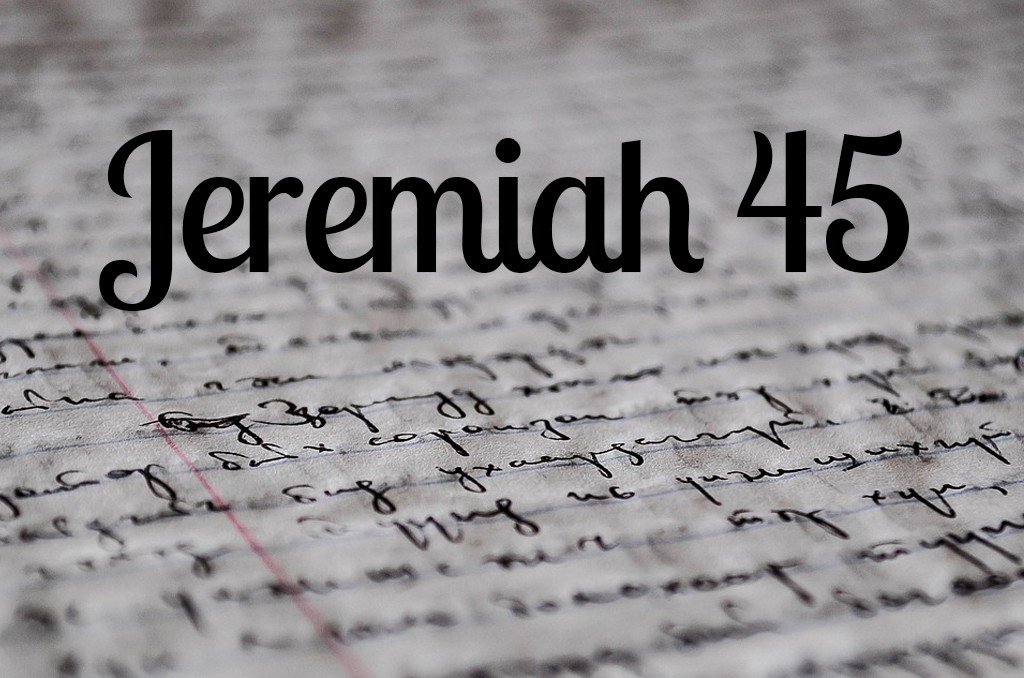 45 The word that Jeremiah the prophet spoke to Baruch the son of Neriah, when he wrote these words in a book at the dictation of Jeremiah, in the fourth year of Jehoiakim the son of Josiah, king of Judah: “Thus says the LORD, the God of Israel, to you, O Baruch: You said, ‘Woe is me! For the LORD has added sorrow to my pain. I am weary with my groaning, and I find no rest.’ Thus shall you say to him, Thus says the LORD: Behold, what I have built I am breaking down, and what I have planted I am plucking up—that is, the whole land. And do you seek great things for yourself? Seek them not, for behold, I am bringing disaster upon all flesh, declares the LORD. But I will give you your life as a prize of war in all places to which you may go.”

We are masters at feeling sorry for ourselves.

In particular this is found among Believers at times when things don’t go the way we expected.  It’s also found when we look at others who are possibly “successful” in whatever they’re doing and we’re laboring hard with no evidence of change.  It’s found when we are looking out for ourselves rather than fulfilling whatever the will of God is on our lives.

The reality is we all struggle with this from time to time.  But do we get stuck there?

Baruch had been serving Jeremiah for years writing his words to be read.  Keep in mind, Jeremiah was wildly unpopular and despised.  It seems that the tipping point had finally come for him as he was emotionally exhausted and tired of this role.  God instructed Jeremiah to call him out – and it was a strong word.

God instructed Baruch to stop looking at himself.  Take his eyes off of what all he had lost in serving.  Whatever in his mind he thought he deserved, it hadn’t happened and he had sunk to self-pity.  It was a reality check for this man.

God promised if he did so, if he would shift his vision and demeanor that had become so selfish, He would protect him.  In essence Baruch needed to stop looking at all he had sacrificed to serve God and draw his attention back to simply that – serving.  He had to take himself out of the mix.

We lose our purpose when our eyes turn inward.  We lose our joy when we look at material things and situations around us and stop drawing near to God.  Frustration sets in and well, what begins is the slippery slope of disengaging with God and in the end can lead toward a complete disconnect.

I love how God did indeed call him out.  To me this states His sheer interest in Baruch as a person and the dangerous ground he found himself.  He does the same to us.  God used Jeremiah to confront his friend and often he’ll do the same with us.  He’ll bring alongside someone with a voice of God to hone in our focus and then re-shift.  It also shows how much God loved Baruch as He was willing to challenge him on his mindset and consequent behavior that had changed.

So, you’re struggling at the moment.  Where has your focus been these days?  What have you been looking toward in how much you’ve given up?  Have you lost your joy in serving?  There’s an issue here.  Seek God and confess these things.  Turn to Him and ask for help to realign yourself with whatever He’s doing.  Take the thoughts captive that have made sense to you but are contrary to God’s calling on your life.

This is a flashback to the 4th year of Jehoiakim so it’s not happening here alongside the destruction of Jerusalem. However, it was placed here, probably to be a timely reminder that God is faithful to those He’s called, no matter the hardships.

This short chapter is centered around Jeremiah’s scribe, Baruch. Essentially, he’s throwing a pity party. We don’t know much about Baruch or his situation. We do know that he would be alongside Jeremiah to pen some of the most difficult prophecies from the Lord. The source of Baruch’s attitude here has been debated by scholars and commentators over the years.

Some believe he was fearful of the bodily threats that had also been given to Jeremiah. Some believe he was depressed that his calling in life was much the same as Jeremiah’s with little fruit to be seen. Others think that he was agonizing over the fact that his personal reputation was linked with Jeremiah and his service did not produce anything to be proud of. A less popular view was that he was unhappy that he didn’t receive the prophetic mantle of succession from Jeremiah. Whatever, the case, Baruch was feeling sorry for himself.

We’ve all been there. It’s that pain and anxiety that overwhelms us. It’s that pit in our stomach that needles us each and every day with the relentless “what if…” scenarios. When our minds run wild with our fears and failures, the results can be debilitating. We blame others. We blame God. We become selfish. This is where Baruch had landed.

Unfortunately, Baruch has done what many of us do when we’re stressed out. He’s made it all about him. Look at verse 3, with all of his “I” and “me” statements.

you are saying, ‘I give up! The LORD has added sorrow to my troubles. I am worn out from groaning, and I can’t find any rest!’

What’s God’s response? He tells Baruch he should be thankful that he will escape the impending judgment with his life. It was common in the military for victorious soldiers to bring home the spoils of war. However, when a soldier escaped the war with his life and was able to go home to his family, it was life itself that become the most worthy of all spoils to bring back. This was the perspective God was revealing to Baruch.

Sometimes we need to check our hearts and understand that the only thing we are entitled to in this life is sin and death. It’s what we’ve earned. Anything beyond that is the grace of God. Take a moment today to be thankful for the fact that you are alive and that the Lord is with you. If all we have is Jesus, we have more than enough.