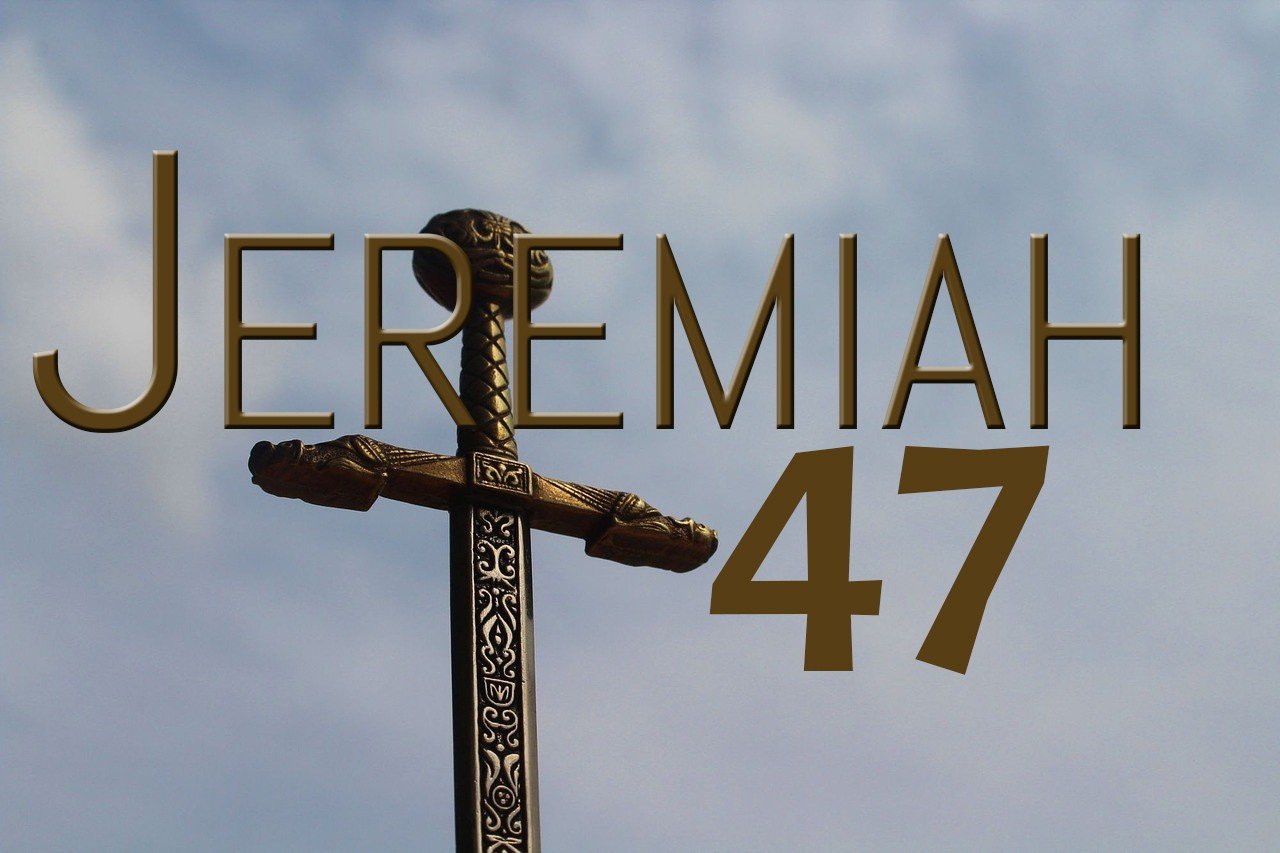 Judgment on the Philistines

47 The word of the LORD that came to Jeremiah the prophet concerning the Philistines, before Pharaoh struck down Gaza.

“Thus says the LORD:
Behold, waters are rising out of the north,
and shall become an overflowing torrent;
they shall overflow the land and all that fills it,
the city and those who dwell in it.
Men shall cry out,
and every inhabitant of the land shall wail.
At the noise of the stamping of the hoofs of his stallions,
at the rushing of his chariots, at the rumbling of their wheels,
the fathers look not back to their children,
so feeble are their hands,
because of the day that is coming to destroy
all the Philistines,
to cut off from Tyre and Sidon
every helper that remains.
For the LORD is destroying the Philistines,
the remnant of the coastland of Caphtor.
Baldness has come upon Gaza;
Ashkelon has perished.
O remnant of their valley,
how long will you gash yourselves?
Ah, sword of the LORD!
How long till you are quiet?
Put yourself into your scabbard;
rest and be still!
How can it be quiet
when the LORD has given it a charge?
Against Ashkelon and against the seashore
he has appointed it.”

The judgments of God are not meaningless whims where He suddenly decides to make a move.  They’re not based on any prejudice or revenge.  God who has always been just and fair, moves when His timing is right.  More on point, He has always given opportunities for repentance or the heart to be turned to Him.

Although God chose Israel to be His people, His love transcends all people groups and greatly desires every tribe and nation, world leader and peasant to come to Him.  That said, as we have read and know to be true, He will not tolerate sin.  Yes, He will go to unbelievable means to reach us, but there does come a point where the judgment falls.  This was not His desire nor has it ever been.  God so desires for salvation to be granted rather than His wrath.

I think many times people who are not following, place Him in the category of some harsh judge who delights in bringing destruction.  It’s such a mindless and sad flippant stance.  For throughout history it has shown the lengths He goes to reach people.  Even for our own personal history, the mercy He extended when we didn’t deserve it is there.

Before any of us are quick to judge our God, which let’s face it that’s what we do so often when things don’t go our way or we feel the burn of His own rebuke, stop.  Take a moment to reflect upon His mercy that was given and what lengths He’s gone to work in your life throughout your journey.  You will see an overarching love that has gone to great lengths to get you to follow.  Yes, He will do whatever it takes to bring us to Him, but even that is a greatness of His love.

The sword of the Lord now comes against the Philistines just as he came against the Egyptians in the previous chapter.

In the grand scheme of what has happened here, it is a stunning and powerful reminder of the sovereignty of God over both his people, but also, everyone else in the world. When he commands one army to defeat another, based on His own will, it happens as He said it would.

For onlookers, it’s a great reminder that He is over all situations. And this is important because many times we compartmentalize. Many have the attitude that God is too busy for the small things, even if they don’t actually verbalize it. We participate in this attitude when we don’t go to Him even in the smallest of details in our own lives.

The Philistines had long been a thorn in the side of Israel. Now, they will cease to exist any longer.  The sword of the Lord swipes where it may reminding all people that His power and authority is unmatched. This truth is a reminder that at the final judgment there will be those who rejoice with His sword and those who will wail from its lashes. Thank you, Jesus, for giving us freedom from God’s wrath so we can celebrate His final victory one day!