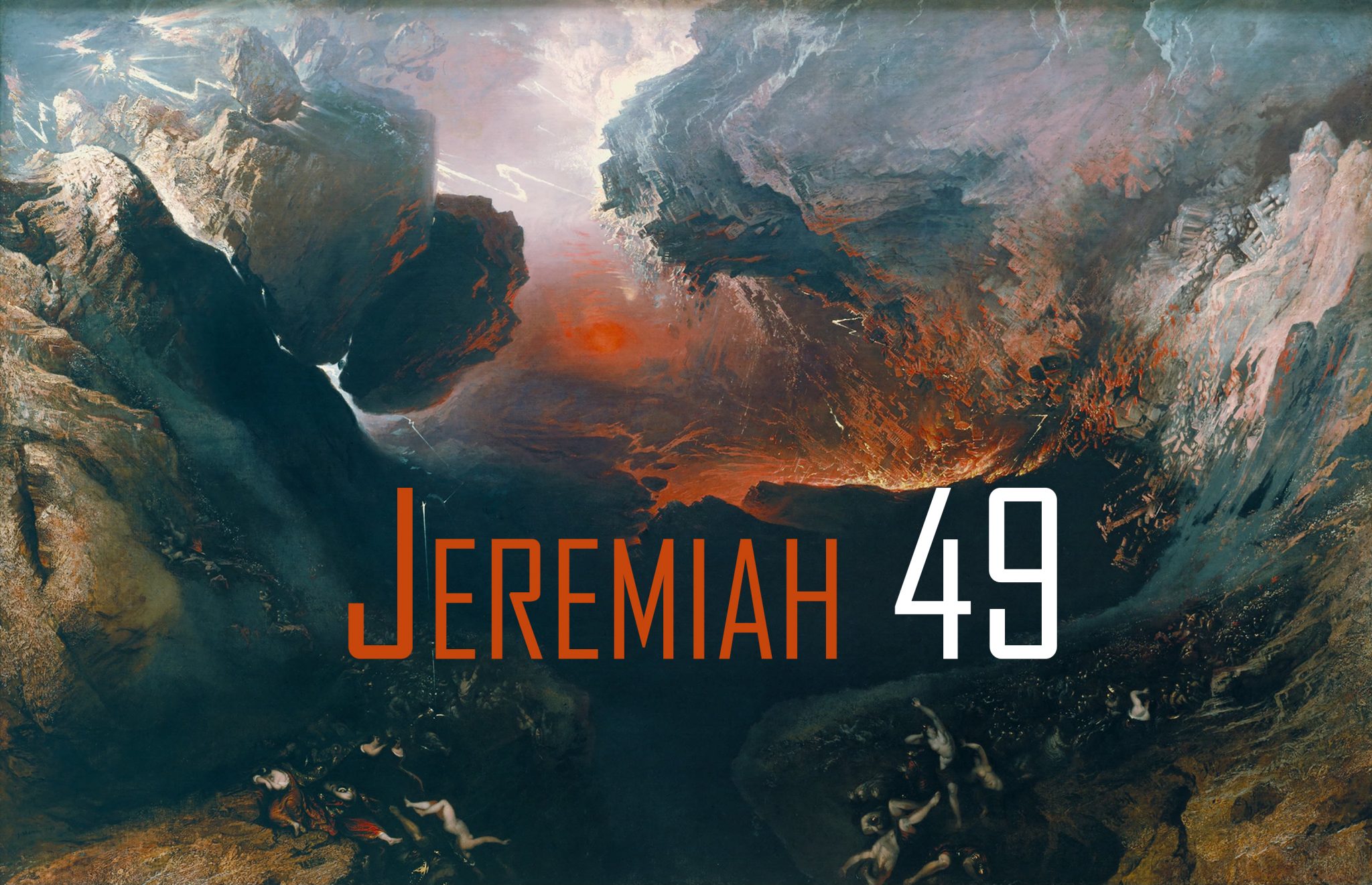 “Has Israel no sons?
Has he no heir?
Why then has Milcom dispossessed Gad,
and his people settled in its cities?
Therefore, behold, the days are coming,
declares the LORD,
when I will cause the battle cry to be heard
against Rabbah of the Ammonites;
it shall become a desolate mound,
and its villages shall be burned with fire;
then Israel shall dispossess those who dispossessed him,
says the LORD.
“Wail, O Heshbon, for Ai is laid waste!
Cry out, O daughters of Rabbah!
Put on sackcloth,
lament, and run to and fro among the hedges!
For Milcom shall go into exile,
with his priests and his officials.
Why do you boast of your valleys,
O faithless daughter,
who trusted in her treasures, saying,
‘Who will come against me?’
Behold, I will bring terror upon you,
declares the Lord GOD of hosts,
from all who are around you,
and you shall be driven out, every man straight before him,
with none to gather the fugitives.

“But afterward I will restore the fortunes of the Ammonites, declares the LORD.”

Thus says the LORD of hosts:

“Is wisdom no more in Teman?
Has counsel perished from the prudent?
Has their wisdom vanished?
Flee, turn back, dwell in the depths,
O inhabitants of Dedan!
For I will bring the calamity of Esau upon him,
the time when I punish him.
If grape gatherers came to you,
would they not leave gleanings?
If thieves came by night,
would they not destroy only enough for themselves?
But I have stripped Esau bare;
I have uncovered his hiding places,
and he is not able to conceal himself.
His children are destroyed, and his brothers,
and his neighbors; and he is no more.
Leave your fatherless children; I will keep them alive;
and let your widows trust in me.”

For thus says the LORD: “If those who did not deserve to drink the cup must drink it, will you go unpunished? You shall not go unpunished, but you must drink. For I have sworn by myself, declares the LORD, that Bozrah shall become a horror, a taunt, a waste, and a curse, and all her cities shall be perpetual wastes.”

I have heard a message from the LORD,
and an envoy has been sent among the nations:
“Gather yourselves together and come against her,
and rise up for battle!
For behold, I will make you small among the nations,
despised among mankind.
The horror you inspire has deceived you,
and the pride of your heart,
you who live in the clefts of the rock,
who hold the height of the hill.
Though you make your nest as high as the eagle’s,
I will bring you down from there,
declares the LORD.

“Edom shall become a horror. Everyone who passes by it will be horrified and will hiss because of all its disasters. As when Sodom and Gomorrah and their neighboring cities were overthrown, says the LORD, no man shall dwell there, no man shall sojourn in her. Behold, like a lion coming up from the jungle of the Jordan against a perennial pasture, I will suddenly make him run away from her. And I will appoint over her whomever I choose. For who is like me? Who will summon me? What shepherd can stand before me? Therefore hear the plan that the LORD has made against Edom and the purposes that he has formed against the inhabitants of Teman: Even the little ones of the flock shall be dragged away. Surely their fold shall be appalled at their fate. At the sound of their fall the earth shall tremble; the sound of their cry shall be heard at the Red Sea. Behold, one shall mount up and fly swiftly like an eagle and spread his wings against Bozrah, and the heart of the warriors of Edom shall be in that day like the heart of a woman in her birth pains.”

“Hamath and Arpad are confounded,
for they have heard bad news;
they melt in fear,
they are troubled like the sea that cannot be quiet.
Damascus has become feeble, she turned to flee,
and panic seized her;
anguish and sorrows have taken hold of her,
as of a woman in labor.
How is the famous city not forsaken,
the city of my joy?
Therefore her young men shall fall in her squares,
and all her soldiers shall be destroyed in that day,
declares the LORD of hosts.
And I will kindle a fire in the wall of Damascus,
and it shall devour the strongholds of Ben-hadad.”

Judgment on Kedar and Hazor

Concerning Kedar and the kingdoms of Hazor that Nebuchadnezzar king of Babylon struck down.

Thus says the LORD:
“Rise up, advance against Kedar!
Destroy the people of the east!
Their tents and their flocks shall be taken,
their curtains and all their goods;
their camels shall be led away from them,
and men shall cry to them: ‘Terror on every side!’
Flee, wander far away, dwell in the depths,
O inhabitants of Hazor!
declares the LORD.
For Nebuchadnezzar king of Babylon
has made a plan against you
and formed a purpose against you.
“Rise up, advance against a nation at ease,
that dwells securely,
declares the LORD,
that has no gates or bars,
that dwells alone.
Their camels shall become plunder,
their herds of livestock a spoil.
I will scatter to every wind
those who cut the corners of their hair,
and I will bring their calamity
from every side of them,
declares the LORD.
Hazor shall become a haunt of jackals,
an everlasting waste;
no man shall dwell there;
no man shall sojourn in her.”

The word of the LORD that came to Jeremiah the prophet concerning Elam, in the beginning of the reign of Zedekiah king of Judah.

Thus says the LORD of hosts: “Behold, I will break the bow of Elam, the mainstay of their might. And I will bring upon Elam the four winds from the four quarters of heaven. And I will scatter them to all those winds, and there shall be no nation to which those driven out of Elam shall not come. I will terrify Elam before their enemies and before those who seek their life. I will bring disaster upon them, my fierce anger, declares the LORD. I will send the sword after them, until I have consumed them, and I will set my throne in Elam and destroy their king and officials, declares the LORD.

“But in the latter days I will restore the fortunes of Elam, declares the LORD.”

God will have the last say.

Sometimes we get so caught up in the tragedy of some event or injustice that takes place with no consequences but there is one thing that is true.  God will have the last say in the matter.  There are times this gets muddled in thought as we see no movement from Him in regards to the situation.  It’s hard to not lose perspective.  But when God acts it is always in His timing and with His ultimate purposes.

Chapter 49 lists various people groups who rebelled against Him.  In reality, some of these go all the way back to the Patriarchs.  But as God declares with tribe after tribe and cities listed, those who have been against Him will be called to accountability.  Many of the prophecies call out their lack of trusting Him, pursuing false idols and simply living and operating in pride.

Chapters like this are hard to get through if we’re honest.  But what we should take note of is God is sovereign and nothing goes unnoticed by Him.  Even if whatever situation you are currently working through, He is fully aware of the ins and outs of and will act when He sees fit.  Hold onto that.  Don’t lose your perspective.

Next up – The Ammonites. The people are different but the message is the same. It’s pride again. These people have ignored God and His commands and they’ve decided that they want to serve themselves. They mock God with their attitudes and actions. They think they are above Him and they don’t need him.

This is so true with us today. When we fall into the cycle of self-reliance and pride, what can change our minds? God will let us go until we feel the pain of our attitude and decisions. God would sift through them as He had so many other times, and bring the small remnant back to be restored. But those who oppose Him will be crushed.

This is what the LORD Almighty said about Edom: “Have the people of Edom lost their good judgment? Can their advisers no longer tell them what to do? Has all their wisdom disappeared?

I wonder, what would these things be today? Entertainment? Wealth? Being a “good person”? The fact is that when these things take center stage above God they set the table to be destroyed. God will not share His companionship with another. The question becomes, are we all in or not?