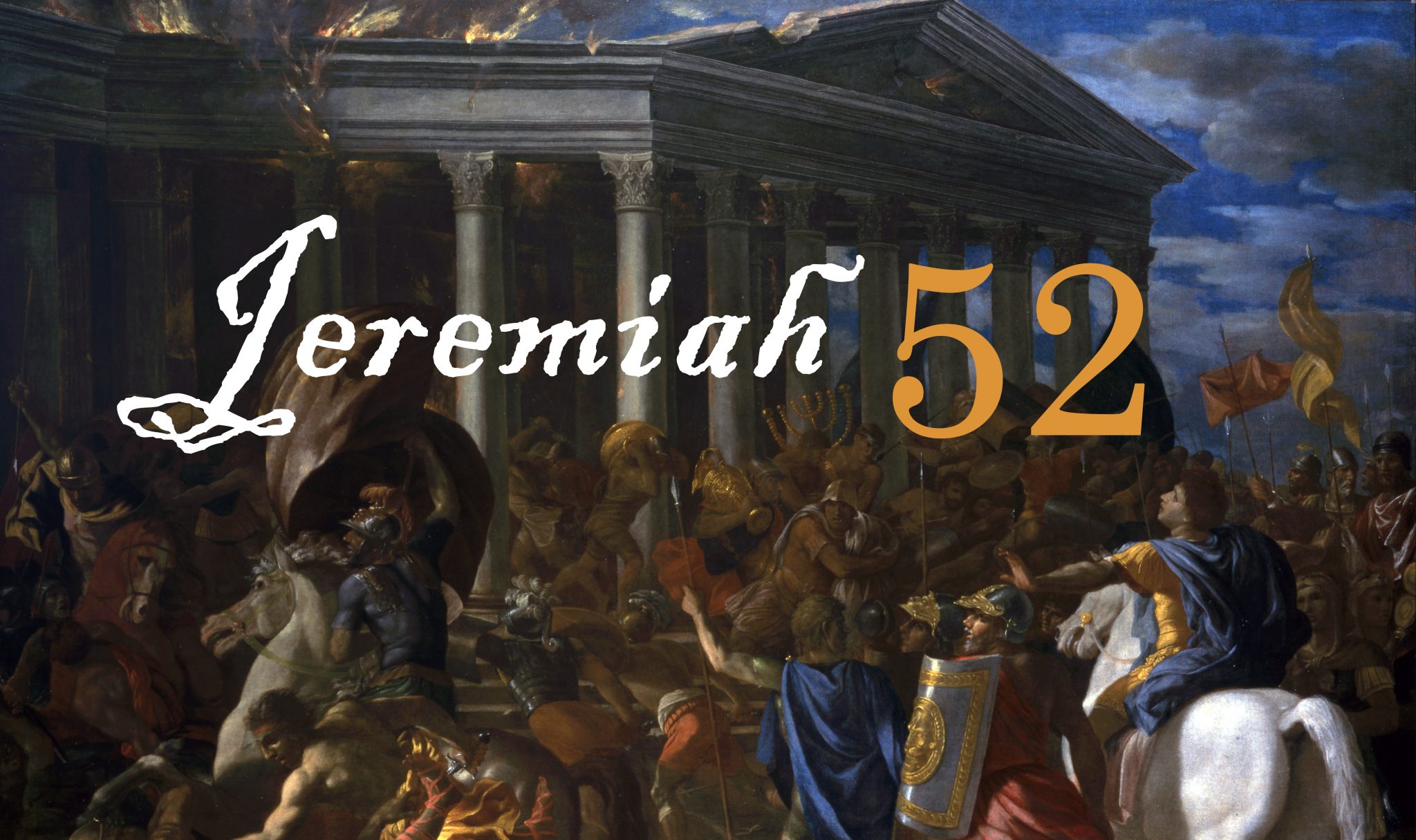 The Fall of Jerusalem Recounted

52 Zedekiah was twenty-one years old when he became king, and he reigned eleven years in Jerusalem. His mother’s name was Hamutal the daughter of Jeremiah of Libnah. And he did what was evil in the sight of the LORD, according to all that Jehoiakim had done. For because of the anger of the LORD it came to the point in Jerusalem and Judah that he cast them out from his presence.

And Zedekiah rebelled against the king of Babylon. And in the ninth year of his reign, in the tenth month, on the tenth day of the month, Nebuchadnezzar king of Babylon came with all his army against Jerusalem, and laid siege to it. And they built siegeworks all around it. So the city was besieged till the eleventh year of King Zedekiah. On the ninth day of the fourth month the famine was so severe in the city that there was no food for the people of the land. Then a breach was made in the city, and all the men of war fled and went out from the city by night by the way of a gate between the two walls, by the king’s garden, and the Chaldeans were around the city. And they went in the direction of the Arabah. But the army of the Chaldeans pursued the king and overtook Zedekiah in the plains of Jericho, and all his army was scattered from him. Then they captured the king and brought him up to the king of Babylon at Riblah in the land of Hamath, and he passed sentence on him. The king of Babylon slaughtered the sons of Zedekiah before his eyes, and also slaughtered all the officials of Judah at Riblah. He put out the eyes of Zedekiah, and bound him in chains, and the king of Babylon took him to Babylon, and put him in prison till the day of his death.

And the pillars of bronze that were in the house of the LORD, and the stands and the bronze sea that were in the house of the LORD, the Chaldeans broke in pieces, and carried all the bronze to Babylon. And they took away the pots and the shovels and the snuffers and the basins and the dishes for incense and all the vessels of bronze used in the temple service; also the small bowls and the fire pans and the basins and the pots and the lampstands and the dishes for incense and the bowls for drink offerings. What was of gold the captain of the guard took away as gold, and what was of silver, as silver. As for the two pillars, the one sea, the twelve bronze bulls that were under the sea, and the stands, which Solomon the king had made for the house of the LORD, the bronze of all these things was beyond weight. As for the pillars, the height of the one pillar was eighteen cubits, its circumference was twelve cubits, and its thickness was four fingers, and it was hollow. On it was a capital of bronze. The height of the one capital was five cubits. A network and pomegranates, all of bronze, were around the capital. And the second pillar had the same, with pomegranates. There were ninety-six pomegranates on the sides; all the pomegranates were a hundred upon the network all around.

The People Exiled to Babylon

And the captain of the guard took Seraiah the chief priest, and Zephaniah the second priest and the three keepers of the threshold; and from the city he took an officer who had been in command of the men of war, and seven men of the king’s council, who were found in the city; and the secretary of the commander of the army, who mustered the people of the land; and sixty men of the people of the land, who were found in the midst of the city. And Nebuzaradan the captain of the guard took them and brought them to the king of Babylon at Riblah. And the king of Babylon struck them down and put them to death at Riblah in the land of Hamath. So Judah was taken into exile out of its land.

And in the thirty-seventh year of the exile of Jehoiachin king of Judah, in the twelfth month, on the twenty-fifth day of the month, Evil-merodach king of Babylon, in the year that he began to reign, graciously freed Jehoiachin king of Judah and brought him out of prison. And he spoke kindly to him and gave him a seat above the seats of the kings who were with him in Babylon. So Jehoiachin put off his prison garments. And every day of his life he dined regularly at the king’s table, and for his allowance, a regular allowance was given him by the king, according to his daily needs, until the day of his death, as long as he lived.

The destruction of Jerusalem and hardhearted people of Judah happened exactly as Jeremiah prophesied.  It’s a bitter end to the story of such rebelliousness of God’s people.  They had chosen to do what they wanted.  They held little regard for God and His words of warning and pleas for turning back.

Front and center in all this was Jeremiah.  A man who didn’t ask for his calling.  A man who was asked to sacrifice every single desire of his life.  He was not allowed to marry.  He would not have children or a legacy to pass on.  He was called to separate himself from family.  If these things were not enough, he was hated by everyone.  By every standard, in the middle of his ministry up to the end, he was viewed as completely unsuccessful.

This weeping prophet, as he’s known for being, may have had those moments of doubt where the hardship was too much.  He struggled like any other person to do the hard things God ordered.  But in the end, he remained faithful.  He did all God asked.

The calling of God upon our lives is an exciting thought but comes with high prices.  We are many times asked to forsake things we desire greatly.  We may not be well liked or even be successful by the world’s standards.  But the calling of God on our life is inescapable.  It burns deep within each individual.  There are personal costs we pay again and again.

But there is no other place where satisfaction and joy are found.  Enduring the calling at times takes everything we have but by obediently walking alongside our God, He brings joy to our steps.  He strengthens us to do what is right and what His asking is.  More on point, when we are following the call of God we are not alone but have God who walks right alongside.

You may be wrestling with a specific calling at the moment.  It seems impossible.  It seems costly.  Oh by all means it is.  The reality is if you choose not to follow you will be miserable.  The Holy Spirit who is the Hound of Heaven will not relent until you obey.   And more on point, people are waiting on the other side of your obedience.  These are the fields ripe for harvest.  These are the places He’s calling.

The final chapter of Jeremiah gives a summary of the events which have occurred, giving us some additional details as to what took place.

The thing that strikes me the most in reading this is how on paper it looks to be such a depressing and disappointing chapter. So much of it involved the judgment and wrath of God being poured out. There is no doubt that Jeremiah felt this deep within his heart.

But he continued to move forward and stayed true to his calling. He knew God would protect him and even though he may have felt like a failure, he succeeded in the responsibility that God asked of Him. In the truest sense of purpose, Jeremiah did exactly what he was created to do. Through tears of sorrow and bursts of righteous anger, Jeremiah served His God.

What would this look like for us today? Currently, our situations may not have panned out the way we thought. They may not even be close. But are we willing to let go of that for the sake of following God and being everything He’s called us to be anyway? What if God asks us to fail in the world’s eyes to be lifted high in God’s kingdom? What if Jesus asks us to be last in order to be first? Will we do it?