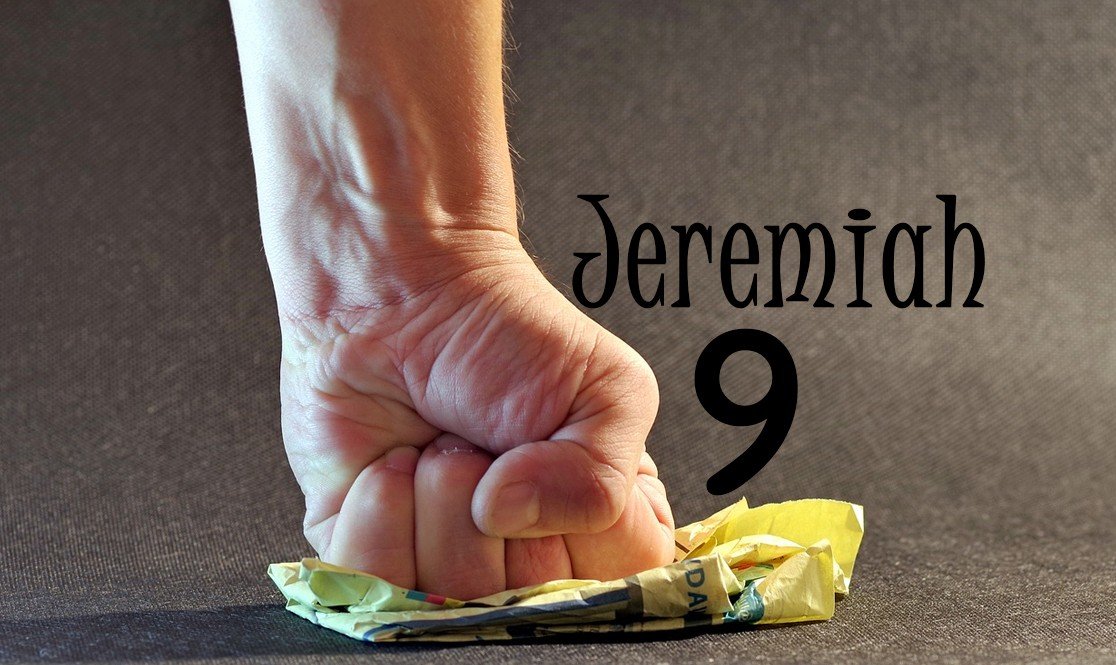 9   Oh that my head were waters,
and my eyes a fountain of tears,
that I might weep day and night
for the slain of the daughter of my people!
Oh that I had in the desert
a travelers’ lodging place,
that I might leave my people
and go away from them!
For they are all adulterers,
a company of treacherous men.
They bend their tongue like a bow;
falsehood and not truth has grown strong in the land;
for they proceed from evil to evil,
and they do not know me, declares the LORD.
Let everyone beware of his neighbor,
and put no trust in any brother,
for every brother is a deceiver,
and every neighbor goes about as a slanderer.
Everyone deceives his neighbor,
and no one speaks the truth;
they have taught their tongue to speak lies;
they weary themselves committing iniquity.
Heaping oppression upon oppression, and deceit upon deceit,
they refuse to know me, declares the LORD.
Therefore thus says the LORD of hosts:
“Behold, I will refine them and test them,
for what else can I do, because of my people?
Their tongue is a deadly arrow;
it speaks deceitfully;
with his mouth each speaks peace to his neighbor,
but in his heart he plans an ambush for him.
Shall I not punish them for these things? declares the LORD,
and shall I not avenge myself
on a nation such as this?
“I will take up weeping and wailing for the mountains,
and a lamentation for the pastures of the wilderness,
because they are laid waste so that no one passes through,
and the lowing of cattle is not heard;
both the birds of the air and the beasts
have fled and are gone.
I will make Jerusalem a heap of ruins,
a lair of jackals,
and I will make the cities of Judah a desolation,
without inhabitant.”

Who is the man so wise that he can understand this? To whom has the mouth of the LORD spoken, that he may declare it? Why is the land ruined and laid waste like a wilderness, so that no one passes through? And the LORD says: “Because they have forsaken my law that I set before them, and have not obeyed my voice or walked in accord with it, but have stubbornly followed their own hearts and have gone after the Baals, as their fathers taught them. Therefore thus says the LORD of hosts, the God of Israel: Behold, I will feed this people with bitter food, and give them poisonous water to drink. I will scatter them among the nations whom neither they nor their fathers have known, and I will send the sword after them, until I have consumed them.”

Thus says the LORD of hosts:
“Consider, and call for the mourning women to come;
send for the skillful women to come;
let them make haste and raise a wailing over us,
that our eyes may run down with tears
and our eyelids flow with water.
For a sound of wailing is heard from Zion:
‘How we are ruined!
We are utterly shamed,
because we have left the land,
because they have cast down our dwellings.’”
Hear, O women, the word of the LORD,
and let your ear receive the word of his mouth;
teach to your daughters a lament,
and each to her neighbor a dirge.
For death has come up into our windows;
it has entered our palaces,
cutting off the children from the streets
and the young men from the squares.
Speak: “Thus declares the LORD,
‘The dead bodies of men shall fall
like dung upon the open field,
like sheaves after the reaper,
and none shall gather them.’”

“Behold, the days are coming, declares the LORD, when I will punish all those who are circumcised merely in the flesh—Egypt, Judah, Edom, the sons of Ammon, Moab, and all who dwell in the desert who cut the corners of their hair, for all these nations are uncircumcised, and all the house of Israel are uncircumcised in heart.”

The conflict is real.  Jeremiah knows what awaits the people because of their hardheartedness.  He knows personally what this will cost the nation, which is everything.  His emotions raw he feels torn.  He’s completely angered and justifiably so by their sin but also feels compassion.  What’s so fascinating is God sees this conflict Jeremiah senses but also speaks reality:

“You live in the midst of deception, in their deceit they refuse to acknowledge me.”

God brings back the truth of the matter.  Yes, you have compassion but realize you are surrounded by those who give lip service and don’t follow through.  You have firsthand knowledge of what is to come and sorrow wracks your being but don’t let that dictate the truth or change your stance.

One of the most difficult things is to be a bystander to God’s movement upon a person when He is going to do whatever it takes to bring them to Him.  Because we may be personally connected it’s hard.  Watching the overthrow of another’s self-will and headstrong behavior isn’t easy.  But for some, unfortunately, this is what it will take for them to be humbled and come return to Him.  Many times we have front row seats to self-destructive behaviors that leave a person standing in the wreckage.

Because we may have compassion it could get in the way of what God is doing or going to do.

Jeremiah was given a mission by God and called to an incredibly bold life.  That said, he was also one of them.  These were his people whom he was called to speak such unwavering truth.  This was the life of Jesus as well.  He came with a mission but knew He would be rejected.  As He stood and looked over Jerusalem he wept.  But these emotions did not change his course or role.

If by chance you are in the same place, wrestling with your compassion over an individual whom God is working heavily upon at the moment – don’t get in the way.  Be obedient to what God is telling you to speak.  Be obedient to interceding for them.  But also be obedient in not compromising the truth even when it hurts.

Have you ever been torn between sorrow and anger?

On one hand, we are incensed at the lack of spiritual depth in others’ lives. On the other hand, we grieve for the turmoil and disappointment that plagues their lives. Jeremiah lived this.

I wish my head were a well of water, and my eyes a fountain of tears, so that I could cry day and night for my people who have been killed. 2 I wish I had a place to stay in the desert where I could get away from my people. They are all unfaithful, a mob of traitors.

I want to cry day and night for my people. I want to get away from my people. The ups and downs of spiritual disappointment can drive us insane. In many ways, it’s unending. If we are honest with ourselves, it’s healthy. Jeremiah would not have been upset or sad if he didn’t care. The fact that we are emotionally connected to people is a sign that we desire for them to find truth and peace. But what’s the point?

God is working. We get caught up in the day-to-day struggle of wanting things to be “perfect.” Meanwhile, God, who knows exactly what we need (as well as what others need) orchestrates these situations for his glory. There are times in my life I needed righteous anger to be bold. There have also been times I needed overwhelming sorrow to show compassion. Both have been used to draw others to Him and both have been used to draw me to Him.

This is the miracle of God’s character. He draws us using all kinds of situations and emotions. You may be at a place of anger or sorrow right now. What is the higher purpose of it? What is He showing you and how is He working in others?