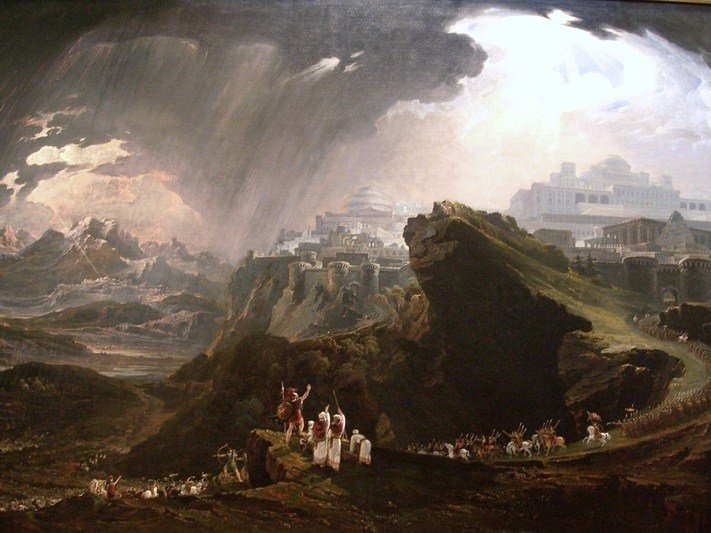 When the circumcising of the whole nation was finished, they remained in their places in the camp until they were healed. And the LORD said to Joshua, “Today I have rolled away the reproach of Egypt from you.” And so the name of that place is called Gilgal to this day.

The Commander of the Lord’s Army

When Joshua was by Jericho, he lifted up his eyes and looked, and behold, a man was standing before him with his drawn sword in his hand. And Joshua went to him and said to him, “Are you for us, or for our adversaries?” And he said, “No; but I am the commander of the army of the LORD. Now I have come.” And Joshua fell on his face to the earth and worshiped and said to him, “What does my lord say to his servant?” And the commander of the LORD’s army said to Joshua, “Take off your sandals from your feet, for the place where you are standing is holy.” And Joshua did so.

The Israelite’s spent 40 years in the desert because they were terrified of the Canaanites. They foolishly doubted God’s ability to do for them what He had said He would do. It was an unnecessary and hard hitting discipline they endured. The irony was now that they were on point, had crossed the river in a miraculous event, word had spread among the Canaanites and Amorites. They were the ones terrified. They never dreamed the people of Israel would be able to cross. Because the Israelite’s had renewed their mission and commitment to God, they were walking literally in faith upon this new ground.

If we are faithful to what and where God calls, He can even change great opposition coming from humankind.

Through a series of renewed events, the Israelite’s were in their last stages of preparation for the great act of God. They re-established an original covenant given through Abraham to mark them as a different people, circumcision. They celebrated the Passover, a first in the Promised Land. For 40 years they had manna supplied from heaven every day for their needs and now that they were in the land promised, ironically the manna stopped. God was giving a sign this bountiful land would provide what they needed physically.

As Joshua approached Jericho, their first conquest, he had an encounter with an Angel of the Army of the Lord. He gave one last boost to what they were about to do. This holy meeting was one last sign before they actually would take the city. God was giving sign after sign He was with them.

When you think about it practically, this was an insane thing God asked of them.

And honestly, His calling to us is much the same. He often requires or leads us toward an impossible task. He asks us to walk in faith even when our sight is limited. As the people of Israel were obedient to stepping into the Jordan Rivers, as they renewed their covenant with Him, as they celebrated what all He had done, God confirmed His place in what they were doing.

We will never see the great things God has in store until we step into the waters. We will never reach that place of fulfilled promises if we don’t renew our pledge and covenants before Him. We will never overtake the dreams and see them to reality if we don’t rekindle our relationship with Him and then move in faith toward the impossible.

Revival of our souls begins on our knees.

There was a series of events that the Lord required of Joshua prior to conquering Jericho. Joshua completed these duties (circumcision and First Passover) and was now waiting on the Lord. For whatever reason (we are not told why) he was stationed by Jericho. Was he overlooking the land, Was he waiting on a revelation? Was he in prayer? We don’t know. But what we do know is, he was waiting for the next step. The divine manifestation was about to take place.

Joshua was about to come face to face with the commander of the Lord’s army. There is some speculation by commentators that this person was Jesus. As compared to the manifestations of this being in Old Testament history, it’s certainly possible that it was. One interesting detail about this encounter is that in Joshua 6:2 this victory is attributed to this supernatural appearance and the name given is Jehovah.

The LORD said to Joshua, “Look, I have handed Jericho, its king, and its fighting men over to you.

If “the LORD” spoken of in Chapter 6 is a continuation of the conversation with the Commander of the Lord’s Army at the end of Chapter 5, then we have our answer. It certainly would be “God in the flesh,” our Savior Jesus Christ!

But let’s dig deeper into this interaction between Joshua and the Commander of the Lord’s Army here in Joshua 5. It strikes me as a strange interaction. Joshua asks a question and that question goes unanwered, yet, the scene ends with worship and obedience by Joshua. Did you catch that?

Joshua is alarmed. There is a man standing in front of him and his presence is a mystery. We are told Joshua simply looks up and there he is. Surprise! But that’s not all. He’s standing there with a sword in hand. And the sword is drawn. Double surprise! Random man with sword drawn! Naturally, Joshua is startled. He wants to know if this random man has a purpose or agenda.

In other words, “Since you are standing in front of me with your sword drawn, would you mind telling me if you are for me or against me?!” It seems like a logical question, however, Joshua doesn’t get a logical answer. He gets shot down. “Neither,” the man replies. Neither? Really? That seems like an important question, right?

This should bring pause. This Commander states he has been sent by God and Joshua knows that the Lord is trustworthy. The current situation does not call for questions, but for worship and obedience. In fact, God is not in the business of answering all our questions. Just think back to the life of Job and all the unanswered questions of his life!

Imagine if Joshua would have said no. Imagine if he would have refused to cooperate until his questions were answered. What kind of trust would that demonstrate? What kind of faith (or lack thereof) would that reveal? I am convicted by this. I often want God to answer my questions. Instead of humbling serving Him, I would rather Him let me in on all the details first. Joshua’s example is one that should speak to all of us.

“The stranger did not respond to Joshua’s question, but instead identified Himself. He was the Commander of the army of the LORD. This elicited a response of humble worship from Joshua. Rather than any further questions about this Man’s loyalties, Joshua asked how he could serve this One greater than him: What does my Lord say to His servant?”