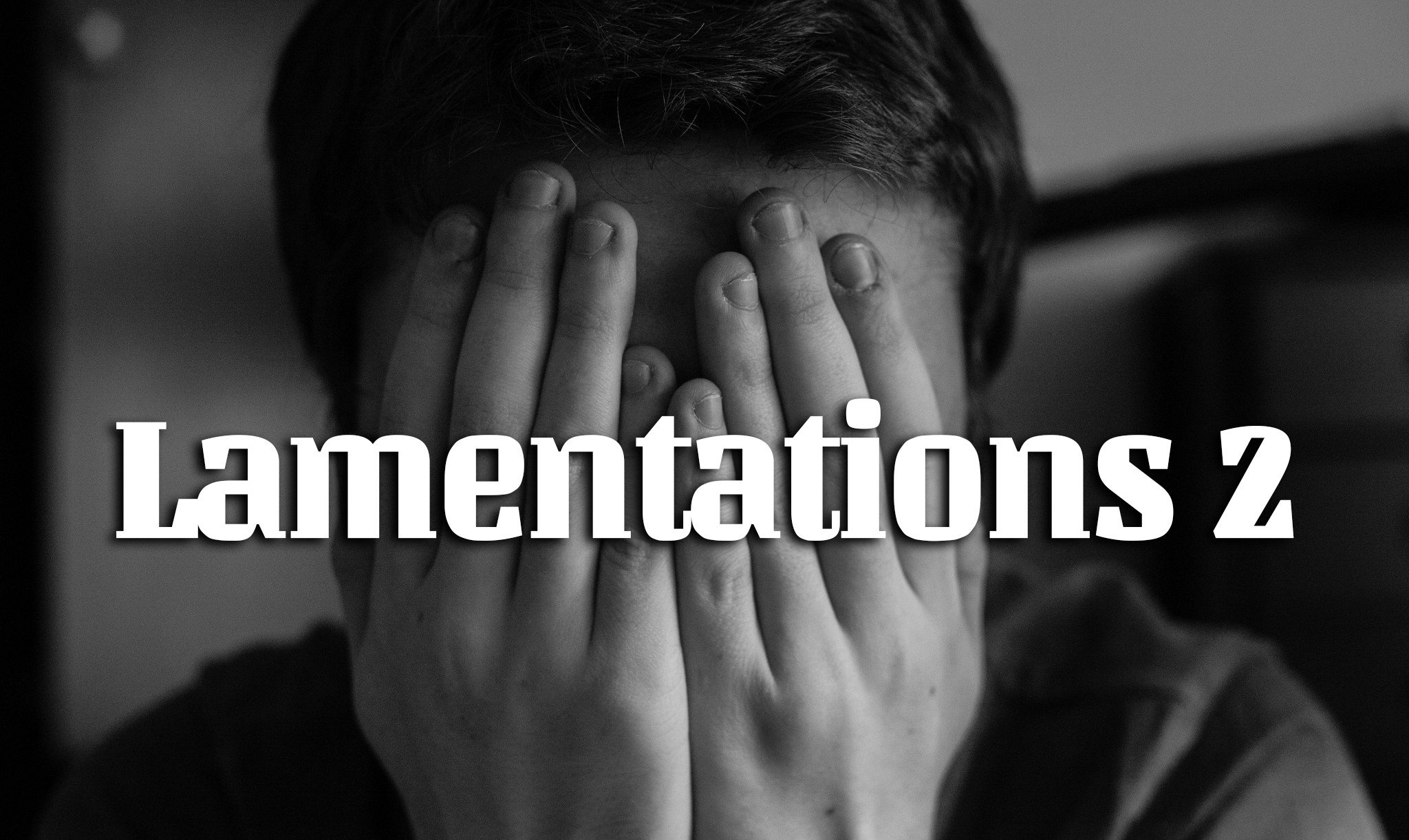 The Lord Has Destroyed Without Pity

2   How the Lord in his anger
has set the daughter of Zion under a cloud!
He has cast down from heaven to earth
the splendor of Israel;
he has not remembered his footstool
in the day of his anger.
The Lord has swallowed up without mercy
all the habitations of Jacob;
in his wrath he has broken down
the strongholds of the daughter of Judah;
he has brought down to the ground in dishonor
the kingdom and its rulers.
He has cut down in fierce anger
all the might of Israel;
he has withdrawn from them his right hand
in the face of the enemy;
he has burned like a flaming fire in Jacob,
consuming all around.
He has bent his bow like an enemy,
with his right hand set like a foe;
and he has killed all who were delightful in our eyes
in the tent of the daughter of Zion;
he has poured out his fury like fire.
The Lord has become like an enemy;
he has swallowed up Israel;
he has swallowed up all its palaces;
he has laid in ruins its strongholds,
and he has multiplied in the daughter of Judah
mourning and lamentation.
He has laid waste his booth like a garden,
laid in ruins his meeting place;
the LORD has made Zion forget
festival and Sabbath,
and in his fierce indignation has spurned king and priest.
The Lord has scorned his altar,
disowned his sanctuary;
he has delivered into the hand of the enemy
the walls of her palaces;
they raised a clamor in the house of the LORD
as on the day of festival.
The LORD determined to lay in ruins
the wall of the daughter of Zion;
he stretched out the measuring line;
he did not restrain his hand from destroying;
he caused rampart and wall to lament;
they languished together.
Her gates have sunk into the ground;
he has ruined and broken her bars;
her king and princes are among the nations;
the law is no more,
and her prophets find
no vision from the LORD.
The elders of the daughter of Zion
sit on the ground in silence;
they have thrown dust on their heads
and put on sackcloth;
the young women of Jerusalem
have bowed their heads to the ground.
My eyes are spent with weeping;
my stomach churns;
my bile is poured out to the ground
because of the destruction of the daughter of my people,
because infants and babies faint
in the streets of the city.
They cry to their mothers,
“Where is bread and wine?”
as they faint like a wounded man
in the streets of the city,
as their life is poured out
on their mothers’ bosom.
What can I say for you, to what compare you,
O daughter of Jerusalem?
What can I liken to you, that I may comfort you,
O virgin daughter of Zion?
For your ruin is vast as the sea;
who can heal you?
Your prophets have seen for you
false and deceptive visions;
they have not exposed your iniquity
to restore your fortunes,
but have seen for you oracles
that are false and misleading.
All who pass along the way
clap their hands at you;
they hiss and wag their heads
at the daughter of Jerusalem:
“Is this the city that was called
the perfection of beauty,
the joy of all the earth?”
All your enemies
rail against you;
they hiss, they gnash their teeth,
they cry: “We have swallowed her!
Ah, this is the day we longed for;
now we have it; we see it!”
The LORD has done what he purposed;
he has carried out his word,
which he commanded long ago;
he has thrown down without pity;
he has made the enemy rejoice over you
and exalted the might of your foes.
Their heart cried to the Lord.
O wall of the daughter of Zion,
let tears stream down like a torrent
day and night!
Give yourself no rest,
your eyes no respite!
“Arise, cry out in the night,
at the beginning of the night watches!
Pour out your heart like water
before the presence of the Lord!
Lift your hands to him
for the lives of your children,
who faint for hunger
at the head of every street.”
Look, O LORD, and see!
With whom have you dealt thus?
Should women eat the fruit of their womb,
the children of their tender care?
Should priest and prophet be killed
in the sanctuary of the Lord?
In the dust of the streets
lie the young and the old;
my young women and my young men
have fallen by the sword;
you have killed them in the day of your anger,
slaughtering without pity.
You summoned as if to a festival day
my terrors on every side,
and on the day of the anger of the LORD
no one escaped or survived;
those whom I held and raised
my enemy destroyed.

Everything the Israelites had been told would happen if they did not turn from their sin had. God in His patience had tried throughout the centuries to woo the people to loving Him through obedience. But finally, enough was enough and God moved – having the Babylonians invade the land, torch the Temple, tear down walls, and cart the people into captivity.

Jeremiah as a watcher of all these events was in tears. The horrors of all that had been forewarned had come to pass.

Four powerful symbols of Jerusalem once a glowing city was derelict and burned. All sources of security the Israelites had depended on were now in rubble or simply had vanished. The city gates were which protected them were sunk into the ground. The leadership of kings and princes were gone. The guidance of the Law was now silent. The prophets voices closed.

Throughout the centuries the people had come to rely on these securities and as a result of such complacency had fallen into sin. They had relied on a false security in such things, when God was simply wanting their hearts and obedience.

As each aspect tumbled, the people were confronted with if they would repent or continue in their stubborn ways. In simplest of form either they would return to the Lord or would go forward marching on their path of suffering.

Sadly all too often we can be like the Israelites. We get duped into a false security. These things can be evident in relationships, jobs, bank accounts, our own abilities. When we put too much trust in such things, we too may see them crumble and disintegrate. But that is not the only thing that falls away – our relationship with Christ suffers as we drift further from His calling on our lives.

Jeremiah watched firsthand all that had been prophesied as to how God would move if the people didn’t get their priorities right and serve God. He saw the men, women and children carted off as nothing more than slaves. And with great heaving sorrow He watched the Temple where God’s presence was represented for the people be burned with fire and destroyed.

Our sin always catches up with us eventually. Suffering and sorrow follow when we have been obstinate to God’s ways and calling on our lives. As you assess your current life and all that surrounds it, are you placing your trust in false securities that can easily tumble and be no more? Are you banking on God’s mercy as you cheapen His grace through your own disobedience?

In the second chapter of Lamentations, God expresses His hatred for sin. It’s important for us to remember that although God hates sin, it does not cloud His compassion for us. However, when we choose to sin we are working against the Lord. This is revealed in His decision to abandon His footstool in the temple.

Here, we must examine the primary motivation for God our Father. It is not to make us comfortable or happy. It’s not to give us what we want. He demonstrated His love for us in that while we were still sinners, Christ died for us. His concern has always been the spiritual growth of His children. He asks us to ‘be Holy because I am Holy.’ So, how far will God go to in order to bring about holiness? This chapter is a reminder of the lengths He went to for Judah.

All this so that His people would repent and turn back to Him. All of this because of His love for our souls and His hatred for sin. Sometimes the most loving act God can bring about is to use circumstances to snap our attention to what is important in life. It’s also vital to understand that all these things He took away were not important in the grand scheme of things. They were religious rituals that had no value by themselves. We must understand that God will go to whatever lengths possible in order to produce strong, mature believers.