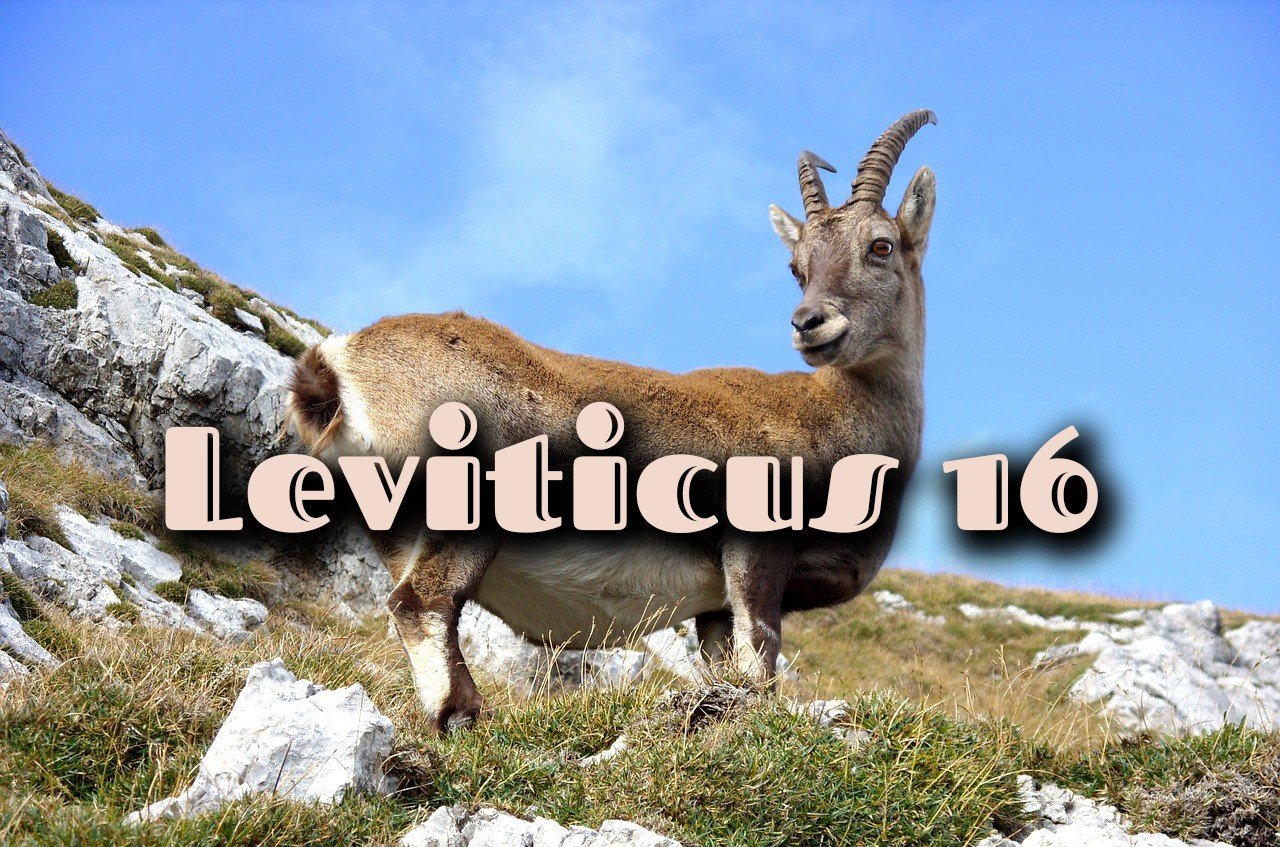 The Day of Atonement

16 The LORD spoke to Moses after the death of the two sons of Aaron, when they drew near before the LORD and died, and the LORD said to Moses, “Tell Aaron your brother not to come at any time into the Holy Place inside the veil, before the mercy seat that is on the ark, so that he may not die. For I will appear in the cloud over the mercy seat. But in this way Aaron shall come into the Holy Place: with a bull from the herd for a sin offering and a ram for a burnt offering. He shall put on the holy linen coat and shall have the linen undergarment on his body, and he shall tie the linen sash around his waist, and wear the linen turban; these are the holy garments. He shall bathe his body in water and then put them on. And he shall take from the congregation of the people of Israel two male goats for a sin offering, and one ram for a burnt offering.

“Aaron shall offer the bull as a sin offering for himself and shall make atonement for himself and for his house. Then he shall take the two goats and set them before the LORD at the entrance of the tent of meeting. And Aaron shall cast lots over the two goats, one lot for the LORD and the other lot for Azazel. And Aaron shall present the goat on which the lot fell for the LORD and use it as a sin offering, but the goat on which the lot fell for Azazel shall be presented alive before the LORD to make atonement over it, that it may be sent away into the wilderness to Azazel.

“Aaron shall present the bull as a sin offering for himself, and shall make atonement for himself and for his house. He shall kill the bull as a sin offering for himself. And he shall take a censer full of coals of fire from the altar before the LORD, and two handfuls of sweet incense beaten small, and he shall bring it inside the veil and put the incense on the fire before the LORD, that the cloud of the incense may cover the mercy seat that is over the testimony, so that he does not die. And he shall take some of the blood of the bull and sprinkle it with his finger on the front of the mercy seat on the east side, and in front of the mercy seat he shall sprinkle some of the blood with his finger seven times.

“Then he shall kill the goat of the sin offering that is for the people and bring its blood inside the veil and do with its blood as he did with the blood of the bull, sprinkling it over the mercy seat and in front of the mercy seat. Thus he shall make atonement for the Holy Place, because of the uncleannesses of the people of Israel and because of their transgressions, all their sins. And so he shall do for the tent of meeting, which dwells with them in the midst of their uncleannesses. No one may be in the tent of meeting from the time he enters to make atonement in the Holy Place until he comes out and has made atonement for himself and for his house and for all the assembly of Israel. Then he shall go out to the altar that is before the LORD and make atonement for it, and shall take some of the blood of the bull and some of the blood of the goat, and put it on the horns of the altar all around. And he shall sprinkle some of the blood on it with his finger seven times, and cleanse it and consecrate it from the uncleannesses of the people of Israel.

“And when he has made an end of atoning for the Holy Place and the tent of meeting and the altar, he shall present the live goat. And Aaron shall lay both his hands on the head of the live goat, and confess over it all the iniquities of the people of Israel, and all their transgressions, all their sins. And he shall put them on the head of the goat and send it away into the wilderness by the hand of a man who is in readiness. The goat shall bear all their iniquities on itself to a remote area, and he shall let the goat go free in the wilderness.

It was ultimate day of the year when it came to Israel and their sacrifices.  The Day of Atonement, known as Yom Kippur, was when a sacrifice would cover the sins of the entire nation.  On this day, all of Israel gathered together confessing their sins as a nation and the high priest would go into the Holy of Holies to make atonement for them.  The purpose for their sins to be covered by the blood of the sacrifice and have them removed.

As God states here, the high priest was to spend hours preparing himself personally to undertake the task.  When he was ready, 2 goats then were brought forward having lots cast as to what their role would be in the ceremony.

These goats represented the way God would deal with offering forgiveness. The first goat would be sacrificed as a sin offering.  Being spotless and without defect, this goat was chosen by God. The goat’s blood was taken into the Holy of Holies where it was applied to the mercy seat as well as the tabernacle and altar.

Once the personal sin of the priest was dealt with, the tabernacle cleansed, then the sin of the people would be addressed.  This sin was transferred upon the second goat, the scapegoat and was released.  Taken outside the city to the desert, this second goat was set free.  The sins were gone.

This ritual was repeated yearly until Jesus’ came and did away with it all once for all.  The work Jesus completed on the cross would not only forgive sin but take it away.  By our putting our faith and trust in Jesus with confession our sins are forgiven and removed.

Chapter 10:1-14 of Hebrews states it beautifully:

“For the Law, since it has only a shadow of the good things to come and not the true form of things can never by the same sacrifices which they offer continually year by year, make perfect those who draw near.  Otherwise, would they not have ceased to be offered because the worshipers having once been cleansed would no longer have had consciousness of sins?  But in those sacrifices there is a reminder of sins year by year.  For it is impossible for the blood of bulls and goats to take away sins.

Therefore, when He comes into the world, He says, “Sacrifice and offering You have not desired, but a body You have prepared for Me.  IN whole burnt offerings and sacrifices for sin You have taken no pleasure.  The I said, behold I have come (in the scroll of the book it is written of me) to do Your will, O God.”

After saying above, “Sacrifices and offerings and whole burnt offerings and sacrifices for sin You have not desired, nor have You taken pleasure in them” (which are offered according to the Law) then He said, “Behold I have come to do Your will.”  He takes away the first in order to establish the second.  By this will we have been sanctified though the offering of the body of Jesus Christ once for all.

Every priest stands daily ministering and offering time after time the same sacrifices, which can never take away sins; but He having offered one sacrifice for sins for all time, sat down at the right hand of God, waiting from that time onward until His enemies be made a footstool for His feet.  For by one offering He has perfected for all time those who are sanctified.”

The goat chosen for Azazel shall be presented alive to the LORD and sent off into the desert to Azazel, in order to take away the sins of the people.

It’s a somewhat bizarre description. A goat will take the sins of Israel and carry them “to Azazel” in the desert. What does this mean?

The sins of Israel are transferred to the goat as the high priest places his hands upon its head. Then the goat is sent deep into a remote area of the wilderness which carries the nation’s sin far away. This was not a symbolic gesture. The sins were literally being carried away from the people on the goat. But who is Azazel?

There’s not a great answer. The most popular explanation is that Azazel was a demon living in the wilderness. Commentators specifically note that the goat was not a sacrifice to the demon, but rather, the sending of sin back to “where it came from.” The possible confusion of interpreting it this way has others believing this is not the right application. In fact, in the very next chapter of Leviticus, offering sacrifices to ‘satyrs’ (devils) is described as a horrific crime.

Another view is that it alluded to a rare Hebrew noun meaning ‘complete destruction.’ Still, a third view sees the term as representing a rocky ledge.

Whatever the case, the point is clear. The sins of the people could not remain with them if the presence of God were to dwell there. There had to be an atonement, or, removal of their sin.

What we find in the NT regarding this theme is pretty fascinating. Of course, we know that Jesus was the final sacrifice that carried our sins far away. But, if you consider the fact that during His suffering on the cross our sins were being placed on Him, it really makes this analogy come to life. It makes me think of when Jesus cried out to God as He felt the spiritual force of our sin upon His shoulders.

About the ninth hour Jesus cried out with a loud voice, saying, “ELI, ELI, LAMA SABACHTHANI?” that is, “MY GOD, MY GOD, WHY HAVE YOU FORSAKEN ME?”

Though we have no idea exactly what Jesus is experiencing, it makes you wonder if, like the goat which is being sent to a faraway place, Jesus felt a similar type of abandonment. We understand that He paid for our sins but have we considered the burden of being disconnected from His Father? There is no doubt that this was His most painful sacrifice: the separation from God. When we reflect on this incredible imagery, we are able to gain a deeper understanding of what was accomplished for us and the price that was required.