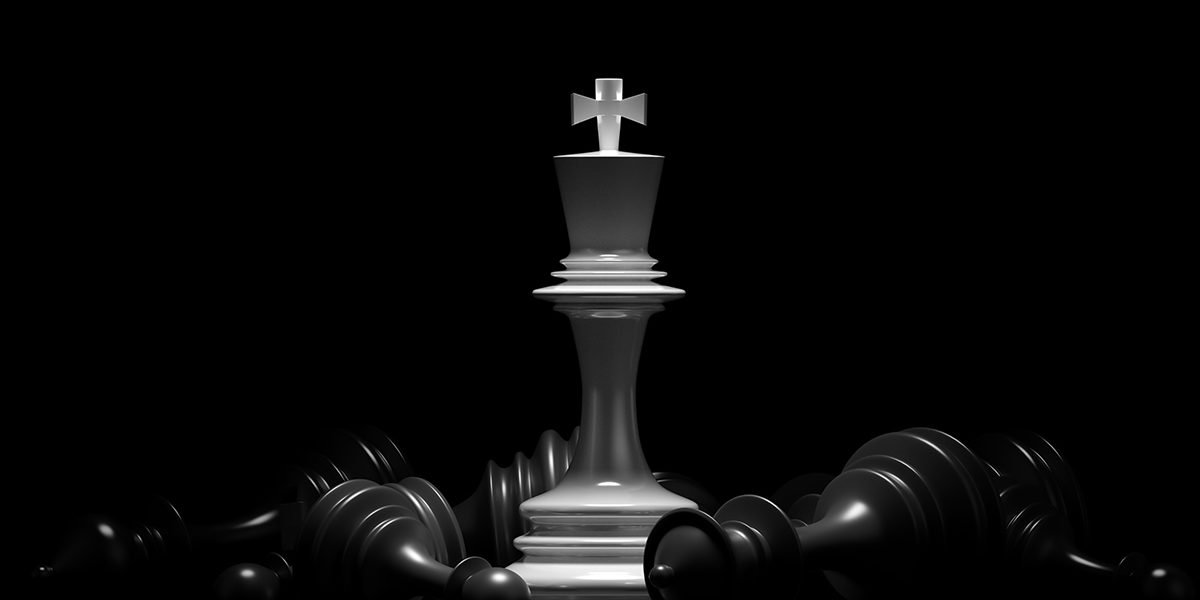 The Authority of Jesus Challenged

20 One day, as Jesus was teaching the people in the temple and preaching the gospel, the chief priests and the scribes with the elders came up and said to him, “Tell us by what authority you do these things, or who it is that gave you this authority.” He answered them, “I also will ask you a question. Now tell me, was the baptism of John from heaven or from man?” And they discussed it with one another, saying, “If we say, ‘From heaven,’ he will say, ‘Why did you not believe him?’ But if we say, ‘From man,’ all the people will stone us to death, for they are convinced that John was a prophet.” So they answered that they did not know where it came from. And Jesus said to them, “Neither will I tell you by what authority I do these things.”

The Parable of the Wicked Tenants

And he began to tell the people this parable: “A man planted a vineyard and let it out to tenants and went into another country for a long while. When the time came, he sent a servant to the tenants, so that they would give him some of the fruit of the vineyard. But the tenants beat him and sent him away empty-handed. And he sent another servant. But they also beat and treated him shamefully, and sent him away empty-handed. And he sent yet a third. This one also they wounded and cast out. Then the owner of the vineyard said, ‘What shall I do? I will send my beloved son; perhaps they will respect him.’ But when the tenants saw him, they said to themselves, ‘This is the heir. Let us kill him, so that the inheritance may be ours.’ And they threw him out of the vineyard and killed him. What then will the owner of the vineyard do to them? He will come and destroy those tenants and give the vineyard to others.” When they heard this, they said, “Surely not!” But he looked directly at them and said, “What then is this that is written:

“‘The stone that the builders rejected
has become the cornerstone’?


Everyone who falls on that stone will be broken to pieces, and when it falls on anyone, it will crush him.”

The scribes and the chief priests sought to lay hands on him at that very hour, for they perceived that he had told this parable against them, but they feared the people. So they watched him and sent spies, who pretended to be sincere, that they might catch him in something he said, so as to deliver him up to the authority and jurisdiction of the governor. So they asked him, “Teacher, we know that you speak and teach rightly, and show no partiality, but truly teach the way of God. Is it lawful for us to give tribute to Caesar, or not?” But he perceived their craftiness, and said to them, “Show me a denarius. Whose likeness and inscription does it have?” They said, “Caesar’s.” He said to them, “Then render to Caesar the things that are Caesar’s, and to God the things that are God’s.” And they were not able in the presence of the people to catch him in what he said, but marveling at his answer they became silent.

Sadducees Ask About the Resurrection

There came to him some Sadducees, those who deny that there is a resurrection, and they asked him a question, saying, “Teacher, Moses wrote for us that if a man’s brother dies, having a wife but no children, the man must take the widow and raise up offspring for his brother. Now there were seven brothers. The first took a wife, and died without children. And the second and the third took her, and likewise all seven left no children and died. Afterward the woman also died. In the resurrection, therefore, whose wife will the woman be? For the seven had her as wife.”

And Jesus said to them, “The sons of this age marry and are given in marriage, but those who are considered worthy to attain to that age and to the resurrection from the dead neither marry nor are given in marriage, for they cannot die anymore, because they are equal to angels and are sons of God, being sons of the resurrection. But that the dead are raised, even Moses showed, in the passage about the bush, where he calls the Lord the God of Abraham and the God of Isaac and the God of Jacob. Now he is not God of the dead, but of the living, for all live to him.” Then some of the scribes answered, “Teacher, you have spoken well.” For they no longer dared to ask him any question.

Whose Son Is the Christ?

But he said to them, “How can they say that the Christ is David’s son? For David himself says in the Book of Psalms,

“‘The Lord said to my Lord,
“Sit at my right hand,
until I make your enemies your footstool.”’


David thus calls him Lord, so how is he his son?”

Beware of the Scribes

And in the hearing of all the people he said to his disciples, “Beware of the scribes, who like to walk around in long robes, and love greetings in the marketplaces and the best seats in the synagogues and the places of honor at feasts, who devour widows’ houses and for a pretense make long prayers. They will receive the greater condemnation.”

Jesus had more than ruffled feathers. He had gone for the jugular. He turned things completely upside down, calling out the corruptness of the religious leaders, had ridden into Jerusalem on a donkey, a symbol of being a king.

Jesus associated with the low-life’s and declared they had found salvation. He went to dinner parties and sat with the despicable. He turned the money changers tables upside down and spoke of being God’s Son.

The entire religious hierarchy was scrambling and enraged. It was only going to get worse.
Thinking they were smarter than he, here began a question-answer session where with each statement posed, or even the spies sent in among Him to rattle things, they were left standing there with their tails between their legs. Foolishly they kept going.

With each question, they pressed they thought they ‘had him’ and he’d slip. They questioned by whose authority He had. They schemed to get Him to answer a question about paying taxes. They brought up religious and divisive questions about the resurrection (a point of contention between the Pharisees and Sadducees) and even asked questions about being married after death and what that looked like. And with each question and conversation – Jesus nailed their sorry tails to the wall. He would silence them with his wisdom and even posing questions back that would incriminate.

Let’s keep in mind here these are the last days of His earthly life. Their intensity of hate would crescendo by the end of the week with His blood on their hands as they murdered Him.

Time was of the essence and Jesus going for the jugular was an exposure of the religious leaders and the broken religious system that was filled with corruptness. Religion needed to end. Relationship was going to be the way to reach the Father.

We ourselves can get caught up in the religion of things. We check boxes. We do this or do that where we appear to look good and put us in good standing with God. It’s a false security. Jesus’ call then and now is to deny ourselves and follow Him. It’s to be in an active give and take relationship. Religion or relationship – which defines you?

Some of the scribes answered and said, “Teacher, You have spoken well.” 40 For they did not have courage to question Him any longer about anything.

The so-called “experts” of the Scriptures finally ran out of challenges to throw at Jesus. Did this mean that they were on his side? No. It just meant that they had made up their minds. They were done with Jesus and ready to have him framed and murdered. The end was drawing near, and they no longer had the energy to debate. They wanted him dead.

In the verses following, Luke records Jesus continuing to speak. In these verses, I believe Jesus pinpoints a huge stumbling block for the teachers of the law. Why couldn’t these “experts” look at Jesus and see the manifestation of Old Testament prophecies fulfilled in the flesh?

Then He said to them, “How is it that they say the Christ is David’s son? 42 “For David himself says in the book of Psalms, ‘THE LORD SAID TO MY LORD, “SIT AT MY RIGHT HAND, 43 UNTIL I MAKE YOUR ENEMIES A FOOTSTOOL FOR YOUR FEET.”‘ 44 “Therefore David calls Him ‘Lord,’ and how is He his son?”

In Matthew’s account of this story, the Pharisees directly say to Jesus that the Messiah is the son of David. This is, of course, correct… but incomplete. The Pharisees give the easy answer. It’s something they have learned for their entire life. It’s a faithless answer because it’s a well-known fact. It cost them nothing to define the Messiah as a son of David because no one around them would have challenged them on this opinion.

Jesus follows up by quoting Psalm 110:1 which puts them in quite a predicament. “The Lord (God) said to my Lord (Jesus), “Sit at my right hand…” There are two Lords there and obviously, none of them are David. Jesus says to them, “I am David’s Lord!” The Pharisees weren’t buying it. They didn’t have the faith to see the spiritual nature of Christ that walked before them. Furthermore, they had made up their minds that they would define The Messiah by their own factual ideas instead of what was written in the Word. Did you get that last part?

Today, you could ask 10 people on the street who they think Jesus was and get 10 different answers. Some would appeal to science because that is their god. Some would appeal to facts, or history, or good works. There are “Christian” denominations that have even altered the Scriptures to satisfy their denial of the deity of Jesus. It’s much easier that way.

How do you define Jesus? Do you trust the Holy Spirit-inspired Scriptures or have you made something else your god? Jesus was a man – the son of David, but He was also the pre-existent Son of God. To believe and live the former won’t cost you much. The latter will cost you your life.