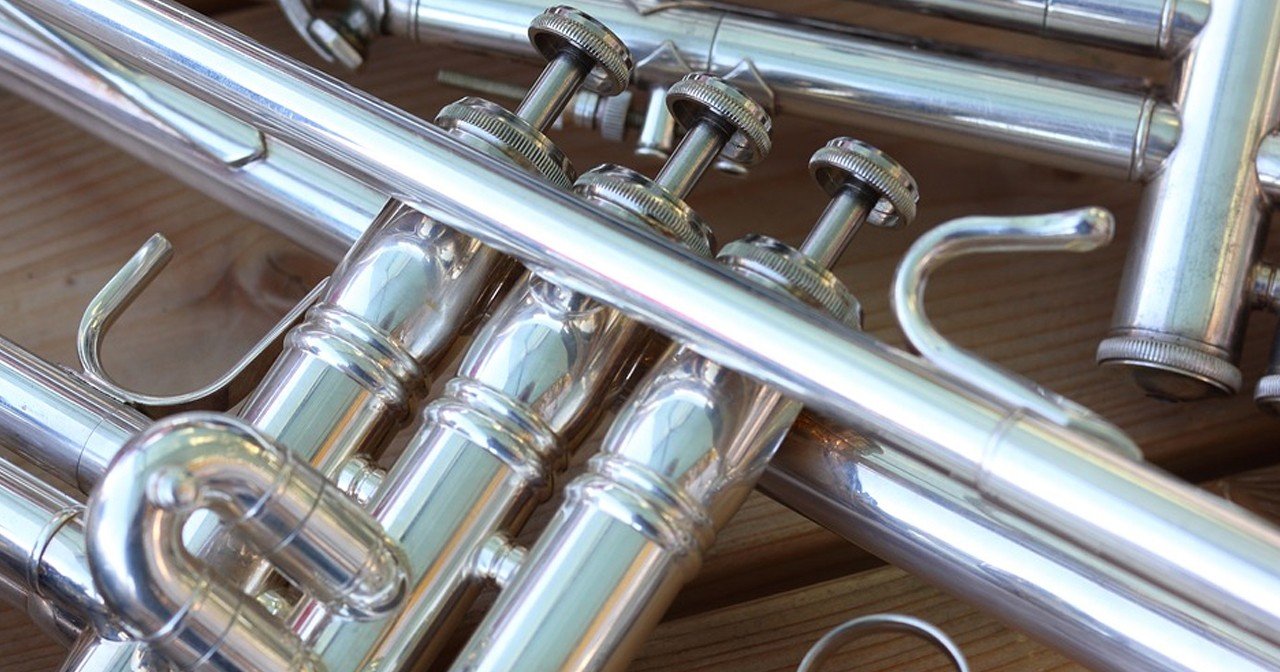 10 The LORD spoke to Moses, saying, “Make two silver trumpets. Of hammered work you shall make them, and you shall use them for summoning the congregation and for breaking camp. And when both are blown, all the congregation shall gather themselves to you at the entrance of the tent of meeting. But if they blow only one, then the chiefs, the heads of the tribes of Israel, shall gather themselves to you. When you blow an alarm, the camps that are on the east side shall set out. And when you blow an alarm the second time, the camps that are on the south side shall set out. An alarm is to be blown whenever they are to set out. But when the assembly is to be gathered together, you shall blow a long blast, but you shall not sound an alarm. And the sons of Aaron, the priests, shall blow the trumpets. The trumpets shall be to you for a perpetual statute throughout your generations. And when you go to war in your land against the adversary who oppresses you, then you shall sound an alarm with the trumpets, that you may be remembered before the LORD your God, and you shall be saved from your enemies. On the day of your gladness also, and at your appointed feasts and at the beginnings of your months, you shall blow the trumpets over your burnt offerings and over the sacrifices of your peace offerings. They shall be a reminder of you before your God: I am the LORD your God.”

And Moses said to Hobab the son of Reuel the Midianite, Moses’ father-in-law, “We are setting out for the place of which the LORD said, ‘I will give it to you.’ Come with us, and we will do good to you, for the LORD has promised good to Israel.” But he said to him, “I will not go. I will depart to my own land and to my kindred.” And he said, “Please do not leave us, for you know where we should camp in the wilderness, and you will serve as eyes for us. And if you do go with us, whatever good the LORD will do to us, the same will we do to you.”

And whenever the ark set out, Moses said, “Arise, O LORD, and let your enemies be scattered, and let those who hate you flee before you.” And when it rested, he said, “Return, O LORD, to the ten thousand thousands of Israel.”

I cannot imagine the task Moses had in leading.  Here he was with 100’s of 1000’s and way upward and beyond in numbers, leading all of them through the desert.  The communication alone would have been a challenge.  This doesn’t take into account this was truly the formation of the people of Israel and everyone had their own ideas of how things should go.

Simply consider, Moses didn’t aspire to be a leader – God appointed him.  It wasn’t necessarily ever in his bucket list of things to do; in fact, I would wager it was something he would have never wanted.  Yet, here he was commanded by God, jettisoned into one of the most important leaders for Israel itself.  We admire Moses for his leadership.  He’s well known for all He did and His relationship with God.  But the sheer reality is what Moses was called to do took grit.  He had to set aside himself, those many days when whatever was happening he didn’t sign up for.  He had to move forward as God had called.  There was no turning back.

Leadership is no easy task.  Many long for such a position of leadership in one form or another at some point in their lives.  They want to move forward, make a difference and serve in such a capacity.  But anyone who has dangled their feet in the waters of leadership knows whatever preconceived idea they may have had about it quickly disintegrates.   Leadership, in particular, God-centered leadership, takes everything we have.

These thoughts seem real as the Israelite’s are finally ready to move from their camp.  This would be nothing short of a mob to corral.  What would be used as communication was trumpets.  These would be seen again and again on the Israelite journey as their blowing brought about movement, marching into battle and gathering people to assemble together as one.  Each had a distinctive blow that indicated the purpose of what they were doing or where going.

As a nation, the people were finally on their way to the Promised Land.  This was a move toward liberty and freedom.  They were finally ready.  This is quite a feat considering how different this same group had changed from when they left Egypt.  The people were ordered.  They were organized.  They had gone through the cleansing and purification and were set apart.  God had given great instruction to each tribe and as He had led them so far through to this point,  He would lead them further.

God had taken a mass of slaves and was moving them toward a greater thing.  There is no way this would have been easy.  This is what all the chapters truly reveal up to this point.  God was preparing them for some of their greatest challenges yet.  These would be challenges that placed faith in the spotlight and if they would move in it or doubt.

And so again consider Moses and his leadership.  He had to rely wholly on God for the task.  This is what made him such a tremendous leader.  His relationship with God was modeled before the people.  As God had changed things in Moses’ heart, he had done the same in the heart of the people.  We are leaders in one form or another in at least one lane of life.  Many times it seems daunting.  More often than not it’s become something we didn’t sign up for.  But the making of a leader is found with that same leader on his knees looking for guidance through all the preparation God has given so far.

Then Moses said to Hobab the son of Reuel the Midianite, Moses’ father-in-law, “We are setting out to the place of which the LORD said, ‘I will give it to you’; come with us and we will do you good, for the LORD has promised good concerning Israel.”

Reuel was not an Israelite but a Midianite. He was also Moses’ father-in-law. Back in Exodus 2, he befriended Moses and gave his daughter Zipporah to him as his wife. Here, Moses invites Reuel’s son Hobab to journey with Israel to the promised land. At first, Hobab declined. However, it’s possible that he eventually agreed and functioned as the “eyes” for the camp. We don’t know this for sure, but Judges 1:16 lists his name as one who journeyed. We do know for sure that his descendants stayed with Moses and the Israelites.

This is an interesting point to consider because I found myself asking, “Why do they need Hobab’s eyes if they have the cloud of the Lord?” We can learn a lot from Moses’ leadership here. He used a combination of divine guidance and human experience to lead the people. Of course, he would follow wherever the cloud would go. It was the source of the direction and the most important compass for the people. However, Hobab’s knowledge of the wilderness would prove to be beneficial for navigation. Moses trusted God fully but also relied on his trusted human companions to work out the details.

Balance has proven to be elusive in our current world of extreme responses and opinions, but Moses understood that God’s help often comes through people and their gifts. It required humility and trust for him to appoint Hobab into this position. It also required courage. So often in Christian leadership, we find those who only want to listen to God or those who only want to listen to men. What we find in Scripture is a combination of divinely inspired human leadership and direct counsel from God.

We don’t know for sure if Hobab agreed to come along for the journey. But even if he didn’t, it doesn’t take away from the fact that Moses used his human resources alongside the divine guidance from God in order to lead the people. The same is true for us today. We must always prioritize God as our main navigator in life, but there are times when other believers, filled with the Holy Spirit, speak into our lives and help us along the way.